Andy Carroll has left fans in awe after pulling off one of the most spectacular goal-line clearances against West Bromwich Albion on Saturday evening.

The 32-year-old - who joined the Championship outfit in November - fell backwards into the net after attempting to head away an incoming cross at The Hawthorns.

However, it was what happened next that amazed football fans across the country. The former Newcastle United player managed to untangle himself from the net and dive out across the goal line to clear the second shot.

The 32-year-old won the first header - diverting the ball away from the goal - before falling backwards into the net.

West Brom pounced on the rebound quickly - leaving Carroll with very little time to untangle himself from the net. 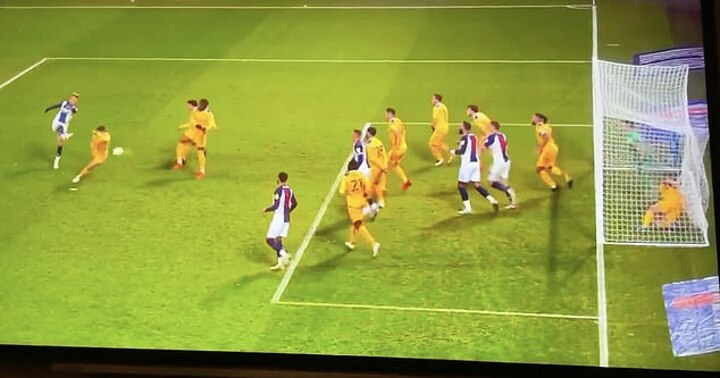 However, that appeared to be no problem for the forward - who wriggled free to dive out over the line and head the ball away once again.

Fans have subsequently taken to social media to praise Carroll for his heroics and laugh about the way in which he completed the double save.

One Twitter user wrote: This is so aesthetically pleasing. As far as I’m aware, Andy Carroll is only being paid £1,000 a week; he just wants to play and this clip shows that perfectly.

Before one fan added: 'Andy Carroll, on the ground and tangled in the net, leaps like a salmon to head a West Brom shot off the line! That is as good as a goal.'

Some supporters couldn't help but laugh at the situation, with one fan saying: 'Ahahahahh that's the most Andy Carroll thing I've ever seen I'm dying'.

While another took the opportunity to make a dig at Manchester United captain Harry Maguire, saying: 'He’s already a better centre back than Harry Maguire.'

Despite Carroll's incredible double save, Reading went on to lose the game 1-0 due to a Callum Robinson strike.