Bayern Munich winger Kingsley Coman was recently asked to choose who the better striker was between Robert Lewandowski and Karim Benzema. 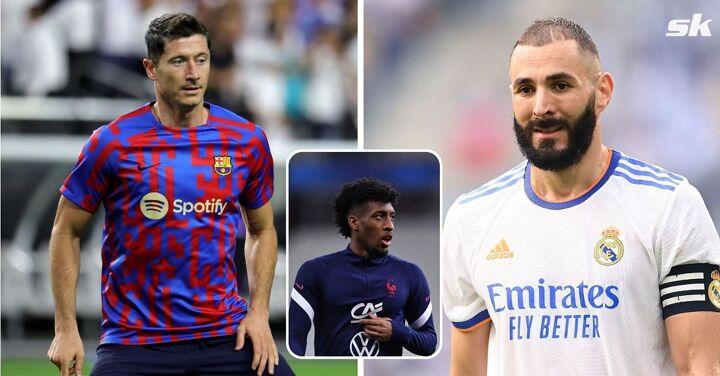 While sitting down for an interview with ESPN (shared via YouTube), Coman was asked several multiple-choice questions. One such question saw him being asked to pick between the former Bayern Munich forward and the Real Madrid striker.

Coman opted for the latter, explaining (with a smile):

The winger seemed to be referring to Lewandowski's move from Bayern Munich to Barcelona this summer for a reported fee of €50 million.

The French forward has been in splendid form since the departure of Cristiano Ronaldo from Real Madrid. He has taken over the goalscoring responsibilities for Los Blancos over the last four years and hit unbelievable levels last term.

The 34-year-old scored 44 goals and provided 15 assists in 46 games for Real Madrid as they won La Liga and the UEFA Champions League. He crucially delivered against Chelsea, Manchester City and Paris-Saint Germain (eight goals in six games overall) in the Champions League knockout stages.

His brilliant displays helped Los Blancos lift a record-extending 14th Champions League crown despite the team finding itself in multiple tricky situations. He is also in line to win the Ballon d'Or this year as he has both the stats and the silverware to win the prestigious award.

Another striker who has shone in the Lionel Messi-Cristiano Ronaldo era of football is Lewandowski. The Poland international has notably won the Men's Best Player in The Best FIFA Football Awards twice (2020 and 2021).

He scored 50 goals and laid out seven assists in 46 games for Bayern Munich last season. After spending eight years at the club, Lewandowski earned his much-desired transfer to Barcelona this summer.

He will now be in direct competition against Benzema as the two elite forwards will represent the El Clasico rivals starting this season. It remains to be seen if the Poland international can challenge Real Madrid's French striker for the Golden Boot as well as team silverware.