A majority of Manchester City fans believe that the club should not resign Borussia Dortmund winger Jadon Sancho in the summer. 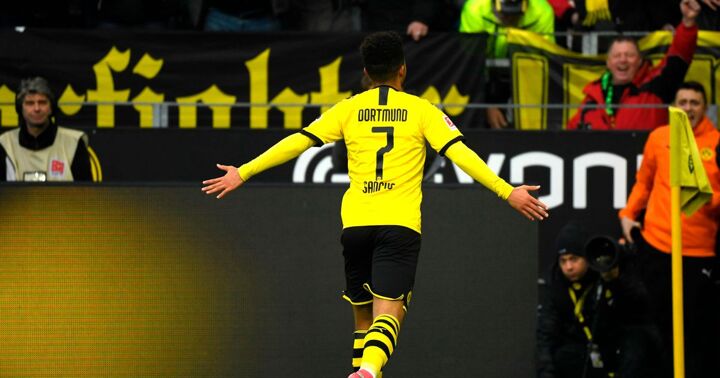 Sancho departed City in 2017 in search of first-team football and has enjoyed a meteoric rise after a breakout season last year, in which he scored 13 goals and grabbed 19 assists as well as breaking into the England side.

The teenager has continued his fine form this season and looks set to break last year's record, having already bagged 15 goals and 17 assists. In fact, Barcelona's Lionel Messi is the only other player in Europe's top five leagues to reach double figures in goals and assists this season - but Sancho did it first.

Unsurprisingly, Sancho's fantastic displays have continued to earn him admirers from Europe's biggest clubs, with City, Manchester United, Liverpool, Chelsea, Real Madrid and Bayern Munich all linked with the forward.

The Blues do have an advantage on all of them, however, if they wish to bring Sancho back to the Etihad.

As part of the £8million move that took Sancho to Dortmund, City get to be involved in any negotiations over the player's next move because they are automatically given the opportunity to match any offer from another club. Dortmund have no obligation to sell, but if they are accepting one offer then the Blues can sit down at the same table.

Pep Guardiola is expected to rejuvenate his squad in the summer following a disappointing Premier League title defence and the wings may be an area that needs strengthening.

Bayern Munich have repeatedly made their interest in Leroy Sane known and with the 24-year-old's contract expiring at the end of next season a move is looking increasingly likely.

Sancho would likely be a more than capable replacement for Sane, yet City fans are split on whether or not they should sign him.

MEN Sport asked City fans: "If Jadon Sancho is available for £100million in the summer, should Man City bring him back to the club?"

An overall majority of 58.2 per cent believe that City shouldn't resign Sancho, with 27.4 per cent believing that the 19-year-old would cost too much and 30.8 per cent thinking the money would be better spent elsewhere in the squad.

The remaining 41.8 per cent think the club should sign Sancho, but many would only want him if Sane did depart.