While the ex-Chelsea man's move to Real Madrid was one of the summer's biggest transfers, his younger sibling is outperforming him at Dortmund 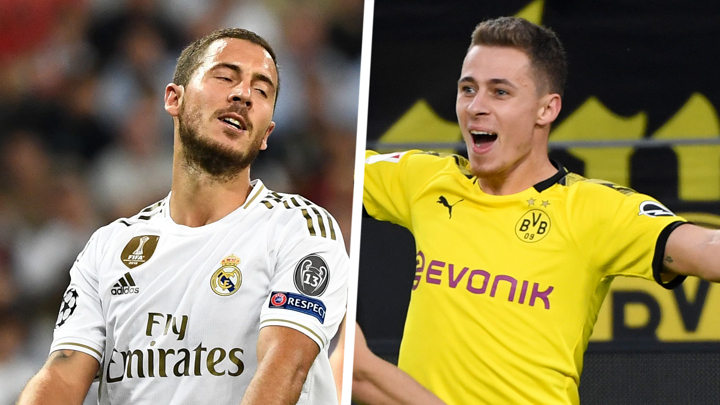 Given the fanfare which greeted Eden Hazard’s transfer to Real Madrid, you could have been forgiven for forgetting all about his brother Thorgan’s move to Borussia Dortmund a few weeks earlier.

“At last, Hazard” howled the front page of Marca. Diario AS went with “Hazard fever”, while in England several back pages carried quotes from the departing Chelsea talisman suggesting that he was ready “to be the world’s best player in the world’s best team”.

It might have been different had Thorgan Hazard moved to Liverpool, as seemed possible, and linked up with the Champions League winners, or moved back to Chelsea where he and his brother were team-mates for a time. As it was, a move from fifth-placed Borussia Monchengladbach to second-placed Dortmund was mainly met with a shrug and treated as an in-house Bundesliga affair. 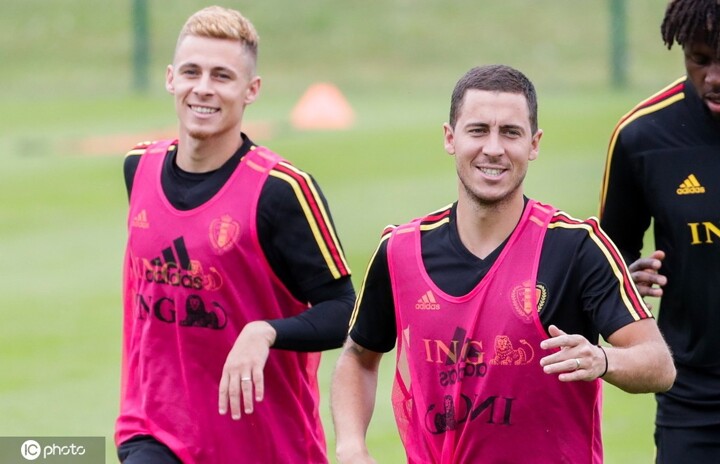 While Eden’s romance with Real had, in fairness, been one of the most tortuous transfer sagas in recent memory, Thorgan’s move to the Westfalenstadion deserved more attention.

In recent years, slowly but surely, he has been narrowing the developmental gap between himself and his older brother. This season, against expectation, he has a realistic chance of overtaking him.

Few would have predicted that, three months into the season, Eden would have one solitary goal to his name in all competitions. Thorgan may only have one himself, having scored his first Dortmund goal in a 3-0 win against Wolfsburg last weekend, but he also tops the Bundesliga assist table with six, while Eden has only one in La Liga and another in the Champions League.

Speaking on beIN Sports after Real’s midweek victory against Galatasaray in which - despite Los Blancos thrashing the Istanbul giants 6-0 - Eden wasn’t directly involved in any of the goals and was brought off for Isco with 25 minutes to play, Arsene Wenger became the latest outside observer to attribute his sluggish form to weight gain over the summer. 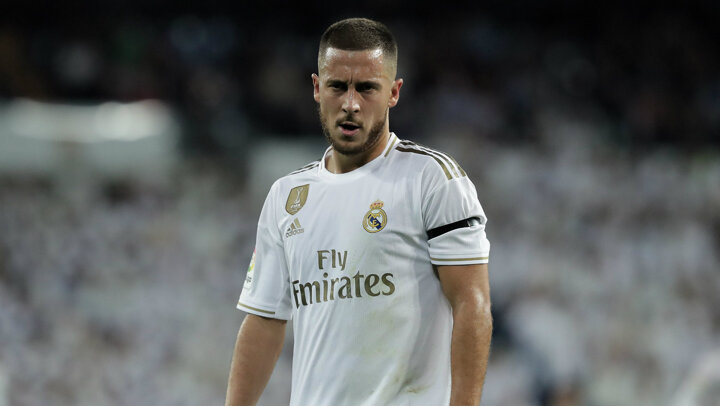 “He is not the type of guy to be [overawed at Real]… I think it is more down to physical reasons,” he said. “He became too heavy. If you want to make a horse lose a race, you put two kilos on a horse of 500 kilos and it’s enough.”

Having picked up a thigh injury in pre-season, Eden might point to his disrupted start to life at Real as a mitigating factor. Few would contest that he is still the more accomplished footballer of the two brothers – leaving younger siblings Kylian and Ethan aside for now – with Thorgan admitting as much last year when he said: “I just have less talent than him. I have to work things out that he might learn faster, if I am being completely honest.”

Nonetheless, while Thorgan has been forced to endure comparisons to Eden for his whole career, those comparisons are now far more flattering than they were during their time at Chelsea, where Eden left a club icon and Thorgan left without a single senior appearance. 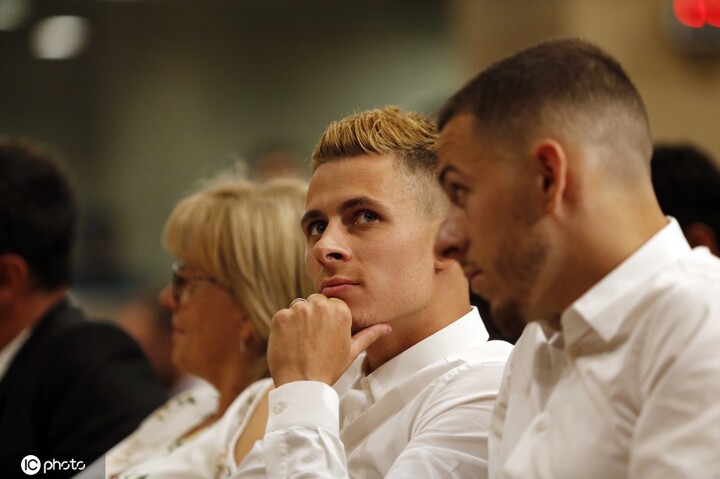 Go back to the 2014-15 season, Eden’s first Premier League triumph and Thorgan’s first on loan with Gladbach, and Eden finished with 32 combined goals and assists while Thorgan ended up with 15. Last season, that gulf had narrowed to 38 for Eden and 25 for Thorgan.

He has motivation enough, having previously revealed that the Hazard with the fewest goals and assists during the club season has to take the whole family out to dinner.

Eden has suffered off seasons before, not least his final campaign under Jose Mourinho when he trundled sullenly to a grand total of six goals. That said, given that he and his team-mates are still familiarising themselves with each other after a summer in which Eden was one of six new arrivals at the Bernabeu, he could easily find form and fitness at Real in the coming months and once again end comfortably ahead of Thorgan in the Hazard family dinner stakes.

Whatever the final tallies, however, it’s hard not to feel that Dortmund have made the better value signing. Where Eden is 29 in a little under two months, Thorgan is 26 and, in theory, just about to enter his prime. 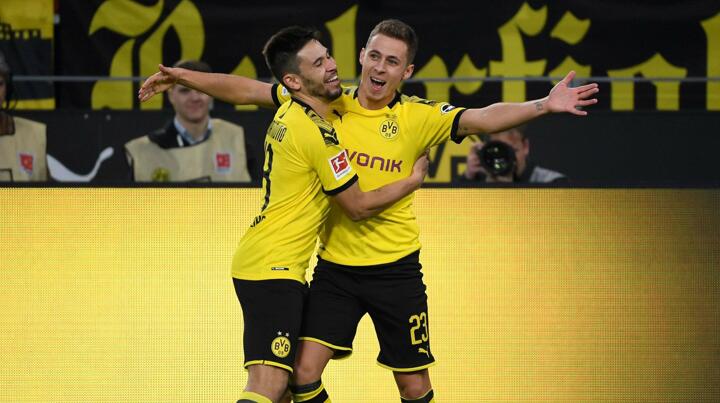 Then there’s the small fact that, at €100m (£89m/$110m) and €25.5m (£23m/$28m) respectively, Real have spent almost four times the amount on Eden that Dortmund spent on Thorgan. Both contracted until 2024, Eden could be 34 by the time he leaves the Bernabeu. Given that his transfer fee could rise to around €175m (£150m/$193m) with add-ons, the likelihood of him appreciating in value at Real would be miniscule even if he was on top form.

Real and Dortmund work on antithetical business models, of course, and Thorgan fits the profile of a BVB signing perfectly. Where Real can absorb massive financial hits on account of their leviathan finances, player sales are at the heart of Dortmund’s economic strategy. Paco Alcacer, Julian Brandt and Jadon Sancho all look like shrewd investments and, along with Thorgan, form the latest link in a chain which goes back to Nuri Sahin, Shinji Kagawa, Ilkay Gundogan, Mario Gotze (now returned from Bayern Munich at a knock-down fee), Henrikh Mkhitaryan, Pierre-Emerick Aubameyang, Ousmane Dembele and Christian Pulisic, among others.

Dortmund sold those players for a combined £310m ($397m) and, should Thorgan continue to do well at the Westfalenstadion, he will no doubt become the latest to leave at a considerable mark-up.

While Real may not need to sell players at a profit to remain sustainable, the ongoing wrangle over Gareth Bale is a reminder that even they can find themselves in a difficult situation when a Galactico transfer goes sour.

Notwithstanding the disruption caused by Bale having his own 24-hour news cycle, they have found it almost impossible to sell him – hence the flirtation with the Chinese Super League – thanks to the gargantuan finances involved.

It’s early days for Eden, but if his form doesn’t pick up soon the men who sign the cheques in Madrid may start to feel twitchy. Back on the Ruhr, meanwhile, the club hierarchy can sleep soundly knowing that Thorgan represents good business for BVB.