After coming off the bench in Borussia Dortmund's meeting with Hertha Berlin, Youssoufa Moukoko made Bundesliga history. 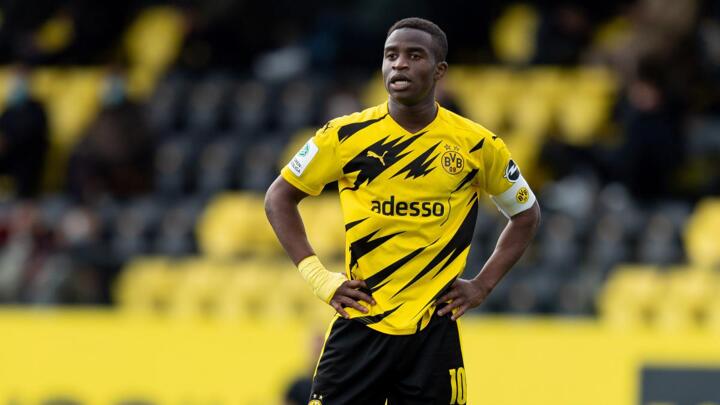 Youssoufa Moukoko has become the Bundesliga's youngest ever player after making his Borussia Dortmund debut against Hertha Berlin on Saturday.

Moukoko, who turned 16 on Friday, made his long-awaited senior bow for Dortmund as a second-half substitute in Berlin with Dortmund 5-2 to the good - Golden Boy winner Erling Haaland boasting an incredible four-goal haul.

The youngster had long been considered an immense prospect in the Dortmund academy, having toppled numerous goalscoring records.

Among them was his impressive haul of 34 strikes from just 20 games in the Bundesliga's youth division last season, while he also became the UEFA Youth League's youngest scorer when still 14 in October 2019.

Previously, Bundesliga licensing rules made it tricky for players to feature in Germany's top tier before the age of 17, with 16 years and six months the absolute minimum age to gain eligibility.

But those regulations were changed in April, allowing for players to become eligible on their 16th birthday, and Moukoko is the first to take advantage.

At 16 years and one day, he has comfortably surpassed the record set by former BVB talent Nuri Sahin (16 years, 11 months and one day) – Yann Bisseck (16y, 11m and 28d) is the only other player to have featured in the Bundesliga before turning 17.

Moukoko is also likely to eventually set a new record as the league's youngest scorer as well, assuming he can make his mark in the next 13 months – the holder of that feat is Bayer Leverkusen prodigy Florian Wirtz (17y, 1m, 3d) following his maiden goal in June.

Club sporting director Michael Zorc expressed concern over the hype surrounding Moukoko in the media earlier this week, but following his historic debut on Saturday, there is little hope of that calming anytime soon.