Spain's Nations League semi-final win over Italy saw the emergence of the latest star to come through Barcelona's academy in 17-year-old midfielder Gavi. 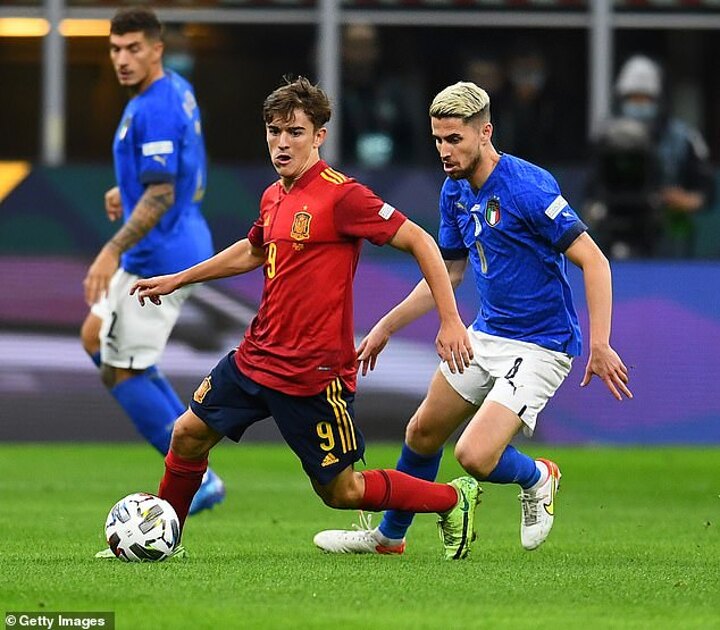 Up against the likes of Marco Verratti and Jorginho, Gavi showed no signs of being overawed by the occasion, producing a confident debut to set up a final clash against Belgium or France.

Here, Sportsmail takes a look at some of the next wonderkids across European football who are set to join Gavi in emerging into stars of the future.

After finding the net four times and providing five assists this season, only Karim Benzema and Erling Haaland have contributed to more goals across Europe's top five leagues than the 18-year-old Bayer Leverkusen wonderkid so far this season.

Described by Germany boss Hansi Flick as the 'complete package', Wirtz is on his way to having an incredible season after also making his international debut last month.

Unsurprisingly, he has been dubbed as the 'new Kai Havertz' after the former Leverkusen star, and some of Europe's biggest clubs are already queueing up in line for the attacking midfielder.

He is German football's biggest talent coming through and as long as he stays fit and healthy then he is certain to have a big future ahead of him. 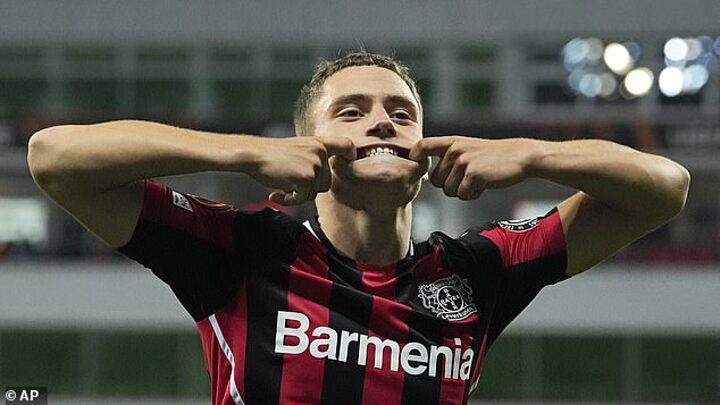 After impressing at Rennes, the 18-year-old sealed a £34m summer move to Real Madrid after being linked to a host of other top European sides, including Manchester United.

The gifted teenager is a complete midfielder who operates in a deep area of the pitch but can contribute going forward.

It will take time for him to fully break into the Real Madrid squad having started three of their nine games across LaLiga and the Champions League so far this season.

But manager Carlo Ancelotti has said that he has been 'surprised' by the impact that the youngster has already made, and he's got some of the world's top midfielders over the last decade to learn from in Luka Modric, Toni Kroos and Casemiro. 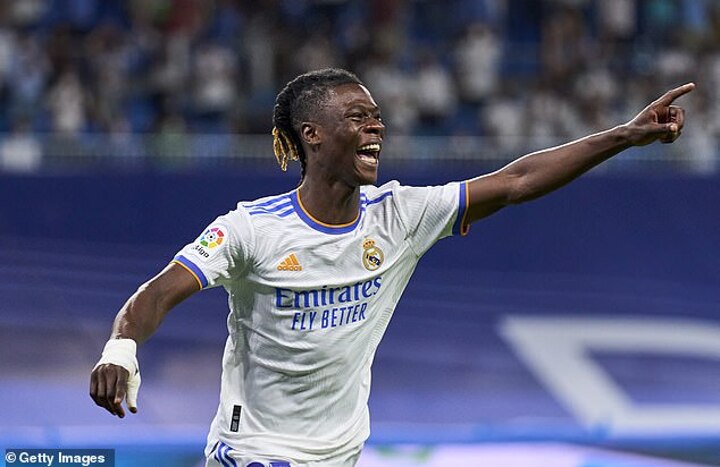 England have a wide array of talented attacking wide players in their squad but Madueke is one name who has been largely out of the limelight playing in the Eredivisie.

He has started this season in similar vein and starred as he scored twice in a 4-0 thrashing of rivals Ajax in the Johan Cruyff Shield final back in August.

Madueke made his England Under-21 debut back in March and has started to get buzz with clubs including Real Madrid, PSG, Liverpool and Tottenham all said to be monitoring his progress. 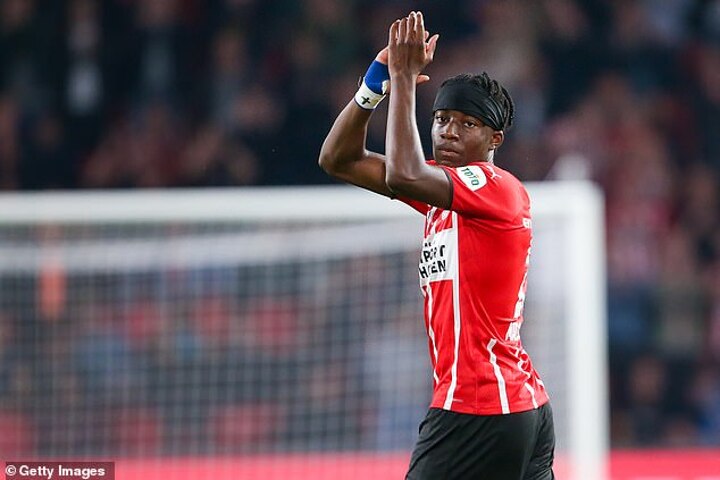 The 19-year-old Dutchman is the latest star to come through Ajax's prestigious youth academy after turning down the advances of Paris Saint-Germain as a 15-year-old.

Gravenberch has been a regular in the side since last season and his performances have led to talk of him being the 'next Paul Pogba'.

The Pogba comparison is understandable, with both 6ft 3in tall central midfielders who look to be the driving force for their team, always looking for the forward pass or a run to start attacks.

Both also share an agent in Mino Raiola, who could be busy in the future over Gravenberch, with some of Europe's top clubs keeping track of his progress over a future move. 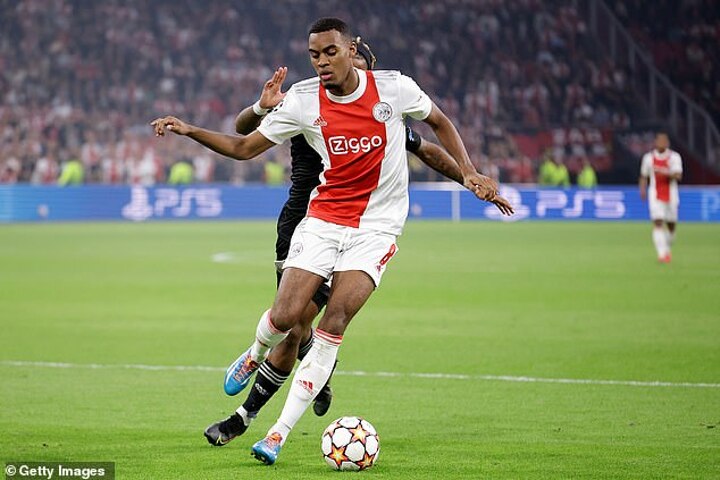 Borussia Dortmund have a number of talented youngsters, including Jude Bellingham, who at 18 years old has emerged into a star midfielder who starts every game for the Bundesliga side and has been called up by England a number of times over the last year.

Another of their young stars is Moukoko, who made his Dortmund debut last November, a day after he turned 16.

He scored an outrageous 141 goals in 88 youth team matches and has since gone on to net three times in 19 appearances at senior level - becoming the youngest scorer in Bundesliga history.

Moukoko already has a £9m deal with Nike and is earmarked to be a future Ballon d'Or winner.

His obvious talent has also picked up the attention of Lionel Messi, who sent a personalised picture to the Dortmund training ground for Moukoko when he was 15. 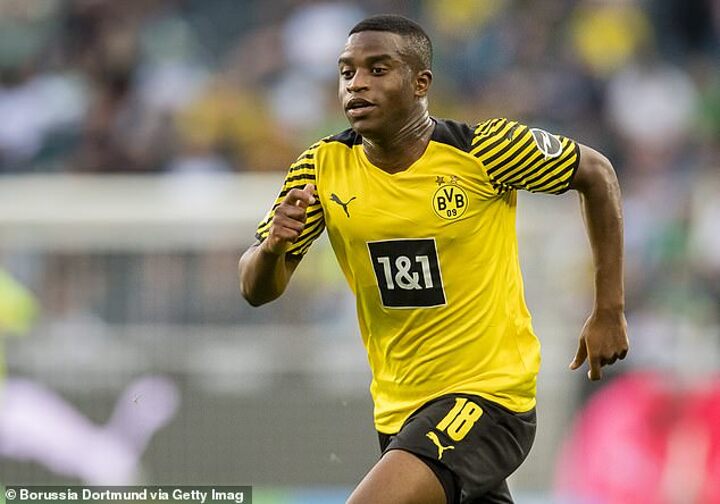 Red Bull Salzburg have had some talented strikers in recent seasons, most notably Erling Haaland. With 11 goals in 14 appearances, they seem to have another star in 19-year-old Adeyemi.

The Austrian league isn't the toughest division, granted, but he is generating serious buzz after netting three goals in the Champions League and it's no wonder Liverpool, Bayern Munich and Borussia Dortmund are said to be interested.

There have been obvious comparisons to Haaland after their Salzburg connection, but he has also been labelled as the 'next Arjen Robben', who is a player Adeyemi described as his 'idol' growing up.

The forward recently scored on his debut for Germany and it is heavily expected he will follow Haaland and Patson Daka out of the door to a top club in Europe should he continue the way he is going. 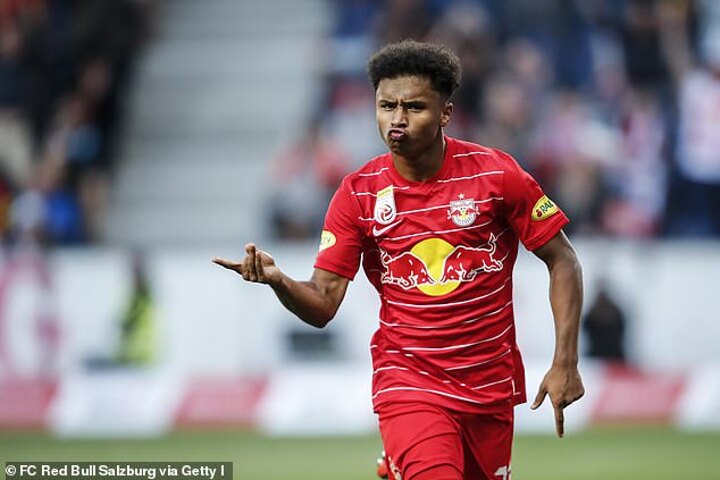 Yusuf Demir (On loan at Barcelona)

The 18-year-old Austrian recently made history by becoming the youngest foreign player to feature for Barcelona since Lionel Messi.

Demir is on loan at Barcelona, who have an option to buy him from Rapid Vienna at the end of the season. Faith has been shown in the youngster who was initially signed with the intention that he would be part of Barcelona's B team.

Despite this he has impressed Ronald Koeman and has in fact made five appearances for the senior club this season, starting twice.

Demir, who has been labelled back home as the 'Austrian Messi' will get a chance to shine at the Nou Camp seeing how the likes of Pedri, Fati and Gavi have got game time. Demir is likely as any to be the next young star to break out at Barcelona. 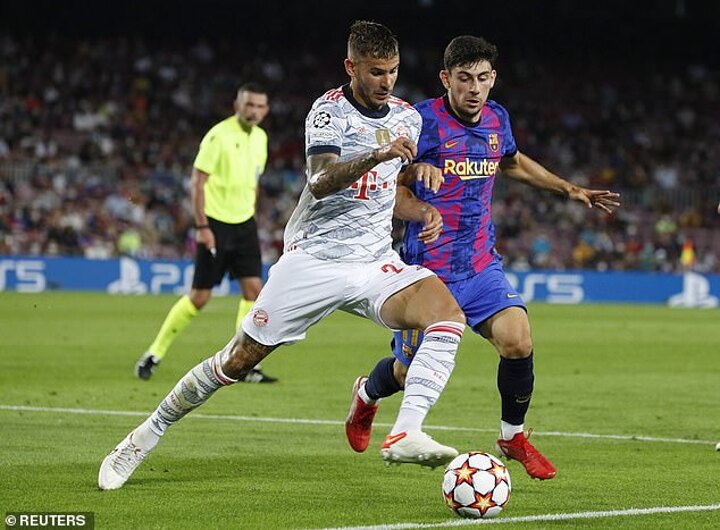