Rio Ferdinand believes Liverpool should put all their eggs in one basket to sign Erling Haaland in the next transfer window, ahead of Manchester United, Real Madrid and Manchester City. 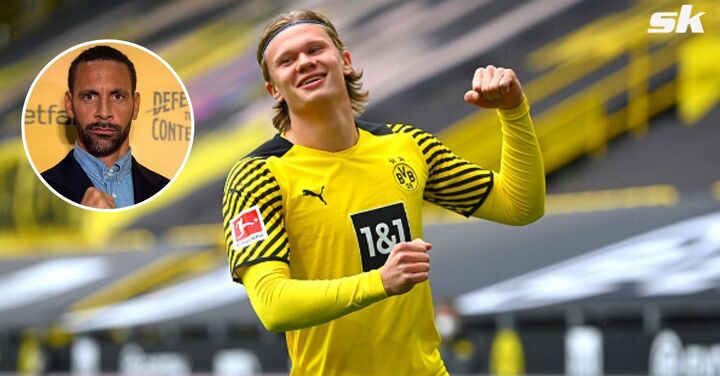 The Borussia Dortmund striker is one of the most sought-after players in the world right now. Furthermore, Haaland will be the most in-demand striker at the end of the current season when a release clause between €75 million (£63m) and €100m (£84m) can be triggered.

Manchester City, among several other clubs, have been linked with the Norwegian forward for a while now. However, Rio Ferdinand believes Haaland will be better suited to Liverpool under Jurgen Klopp's banner. Here's what he said:

"I think he suits other teams better [than Manchester City]. If I was Liverpool I would take him right now. If he goes to Liverpool that’s a devastating front three. I don’t think it’s as hard for him to adapt if he goes to Liverpool. It’s a different system. You see Jack Grealish has gone to Man City, [he is a] top player, brilliant player, we all love watching him, but it’s quite hard to adapt and get into that team. Not many players go there and adapt immediately."

On the flip side, Michael Owen believes Manchester City would be a better fit for Erling Haaland. He stated that Mohamed Salah's scoring record might hit a slump should the Norwegian move to Liverpool. Here's what Owen stated on the subject:

"When Liverpool are at their best they leave a hole up front in the centre. Firmino or Jota will come off [for] those runs inside. I’m not sure Salah would get as many goals if Haaland was in the team,’ said Owen. "It’s an unbelievable prospect but I would’ve thought that Manchester City would be the likeliest [destination]. "

He concluded by saying:

"I’m not sure if there is a bit of bad blood between Haaland, his agent, obviously his dad [Alf-Inge] playing against Roy Keane at Manchester United."

Manchester City, Real Madrid, Liverpool, Chelsea, PSG, and Manchester United have been tailing Erling Haaland for as long as fans can remember

Manchester City's plans to sign Harry Kane didn't materialize in the summer. They have been linked to Haaland ever since. Despite having an attacking combination comprising Romelu Lukaku and Timo Werner, Chelsea have been part of the mix as well.

Real Madrid have been unable to sign Kylian Mbappe. Should the Frenchman agree to signing an extension with PSG, Los Blancos might speed up their process to bring Haaland to Spain.

Liverpool have emerged as favorites to sign the 21-year-old in the last few weeks. Liverpool's attack has been more organized this season, with Salah and Mane looking unstoppable. Although Roberto Firmino has looked in good shape on certain occasions, he has been far from a reliable scoring avenue for Liverpool.

This makes Haaland a viable option for Klopp. Erling Haaland has 70 goals in 69 appearances and is also popularly known for his strength and charisma on the pitch.

It's safe to say that any team would flourish with a striker like Haaland on their roster. It remains to be seen if Liverpool up the ante to go all-in for him in the subsequent transfer window.