Bayern Munich began their quest for a 10th consecutive Bundesliga title in resounding fashion. They thrashed Eintracht Frankfurt 6-1 on the opening day of the 2022-23 season on Friday, August 5 at Deutsche Bank Park. 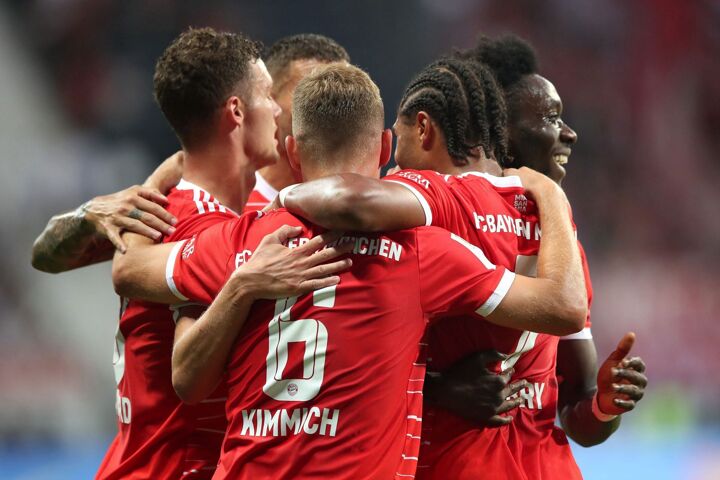 Joshua Kimmich, Benjamin Pavard, Sadio Mane, Jamal Musiala and Serge Gnabry all struck apiece to give the reigning German champions a 5-0 cushion in the first half.

Randal Muani pulled one back for the Eagles in the 64th minute. However, Musiala struck his second goal to restore their five-goal advantage with only seven minutes of normal time remaining.

A wonderful start to the new campaign for Julian Nagelsmann's side, who take on Wolfsburg next weekend in their first home match of the season.

Here are the player ratings for Bayern Munich:

He had a usual day at the office until a horrendous mistake in the closing stages allowed Frankfurt to snatch a goal back.

Muani hassled the goalkeeper with high press and then tackled him before finishing the ball into an empty net.

A menace down the wings with electric runs, Pavard also doubled Bayern Munich's cushion early on with a fierce strike from eight yards.

Defensively too, the 26-year-old came up trumps with one clearance, one block and four interceptions.

The burly Frenchman was a force in defense, making five tackles and two clearances to frustrate the Eagles.

He was strong on the ball too and passed it around with unerring accuracy.

The Frankfurt forwards gave him a hard time in the opening stanza, with Jesper Lindstrøm even skipping past him to go through on goal at one point!

However, Hernandez regained his composure after the break. He completed 96% of his passes and pushed Bayern Munich forward with some terrific long balls.

The Road Runner made some promising runs forward but lacked his usual cutting edge, while Davies also looked sloppy in possession a few times.

He made three interceptions and two tackles but lost possession 14 times.

Raumdeuter's finish wasn't up to the mark today, missing two good chances, but his creativity was as fine as ever as Muller bagged two assists on the night.

Kimmich got the ball rolling with an inventive free-kick in the fifth minute and then created their second goal too.

He was solid defensively too, making timely clearances and reading Frankfurt's movements intelligently. His ability from the dead-ball is truly incredible!

The Austrian was strong in possession and impeded Frankfurt's movement with crunch tackles, which he completed six on the night.

Sabitzer was taken off in the 52nd minute, Bayern Munich's first substitution of the game, and was unfortunately eclipsed by better players.

With two goals on the night, the 19-year-old has already bagged nearly half of what he managed throughout last season (5).

His first was easy, tapping into an empty net after Thomas Muller rounded Kevin Trapp. However, he showed incredible composure for the second despite being under pressure from Makoto Hasebe.

The new recruit is on a roll. He scored a goal on his Bayern Munich debut last weekend against RB Leipzig in their 5-3 win in the DFL Supercup. Now, he scored a goal (and provided two pre-assists) on his Bundesliga debut.

Mane could've got a second late on, but saw his effort saved.

Nonetheless, it's been a bright start to life in Bavaria for the 30-year-old, who looks set for another prolific spell with his new side.

He assisted Mane with a selfless pass before netting Bayern Munich's fifth goal with a lovely dink over Trapp. He also created two big chances and won two out of his five attempted ground duels.

He wasn't involved much but Gravenberch's passing was spot on. Another promising debut on the night.

He tried to set up Mane in the second half but his pass was cut off, although Sane gained redemption shortly after by assisting Musiala.

He showed excellent vision and made two key passes. At 17 years and 100 days, he's the second youngest player to make his Bundesliga debut for Bayern Munich.

Bayern Munich's third debutant of the night, De Ligt looked to convert an inviting corner from Kimmich in the dying minutes of normal time. However, he fouled Kristijan Jakic instead.

He came on around the same time as De Ligt but was barely involved.