If you felt irritated by the disruption of the international break, spare a thought for Jurgen Klopp. 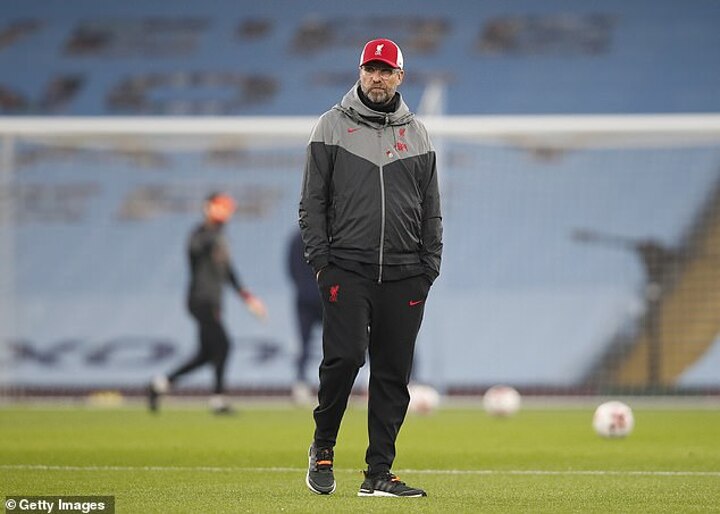 It's been a nightmare two weeks for the Liverpool boss. At one point, he was able to count his number of fit defenders on one hand and thanks to injuries and Covid-19, he's now facing a top-of-the-table clash without his captain and leading goalscorer.

Understandably, many Premier League managers felt it was unnecessary for their players to be jetting off around the globe during a pandemic. Arsenal were also understandably aggrieved that their captain was made to sleep in a Gambian airport.

But try telling Jack Grealish and Phil Foden the international break doesn't matter. They were, by far, the best players for Gareth Southgate's side and staked their claim for a place in his squad for the Euros next summer.

It's been a positive break for Frank Lampard too. Chelsea's players were on fire for their national teams and will come back to London full of confidence.

As domestic football returns to our screens this weekend, Sportsmail takes a look at the biggest winners and losers from the last two weeks.

The defender picked up a knee injury in England training and is facing a battle to play again this season. Joel Matip is now the only fit senior centre back and he has had several injury problems of his own in recent campaigns.

It was hoped the forward would be able to return to England after self-isolating but he returned another positive result on Wednesday and he is now stuck in Egypt until he tests negative. 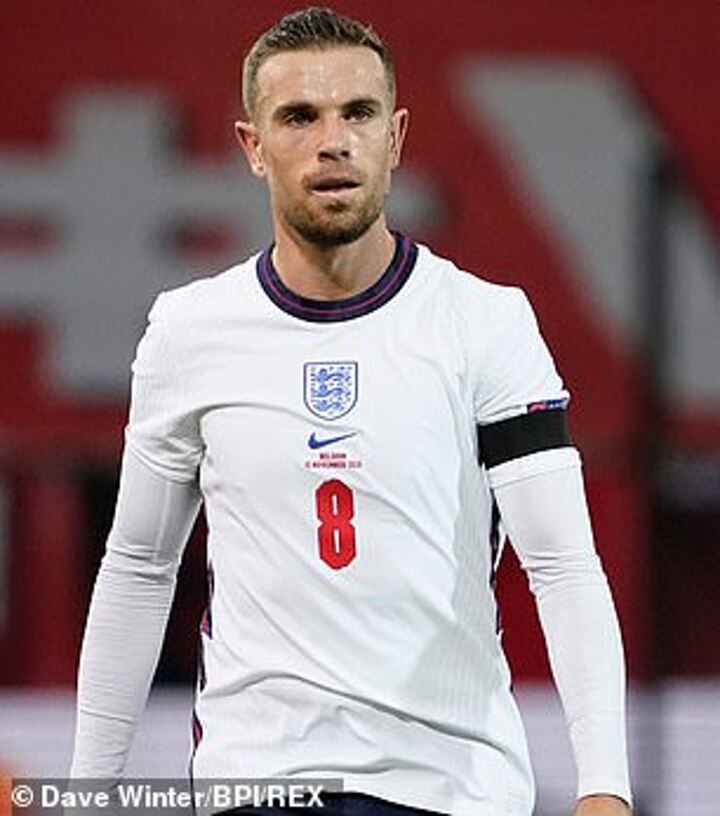 He will miss Sunday's game with Leicester and possibly the Reds' next two games against Atalanta and Brighton.

Captain Jordan Henderson is also set to miss the match with the Foxes. The midfielder withdrew from the England squad on Monday after picking up a groin injury in the game against Belgium and is not expected to recover in time.

Rhys Williams was then sent home from the England U21 camp as a precaution with the defender suffering from a sore hip.

No one had a worse international break than Klopp, who must wonder if he's upset the footballing gods. Even Germany let him down. 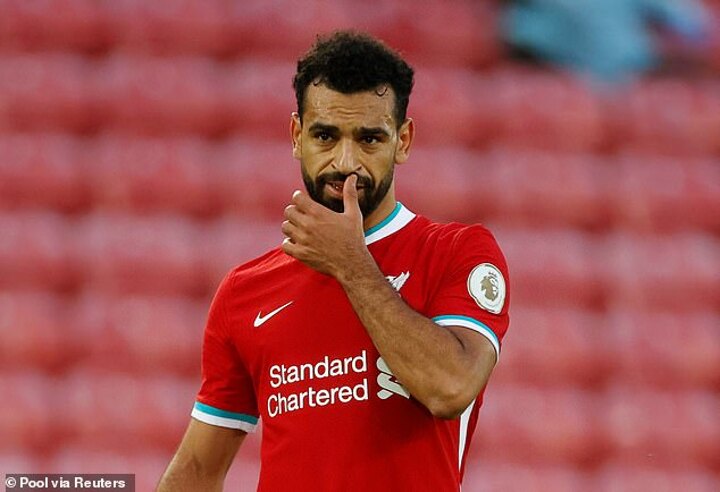 When you're a manager under pressure, you really need all your players to return from their international camps fully fit and firing.

Losing his two first-choice centre backs to injury was not part of Zinedine Zidane's plan.

Sergio Ramos and Raphael Varane both picked up hamstring injuries during Spain and France's respective matches on Tuesday, leaving the Real Madrid boss with a headache ahead of two crucial games. 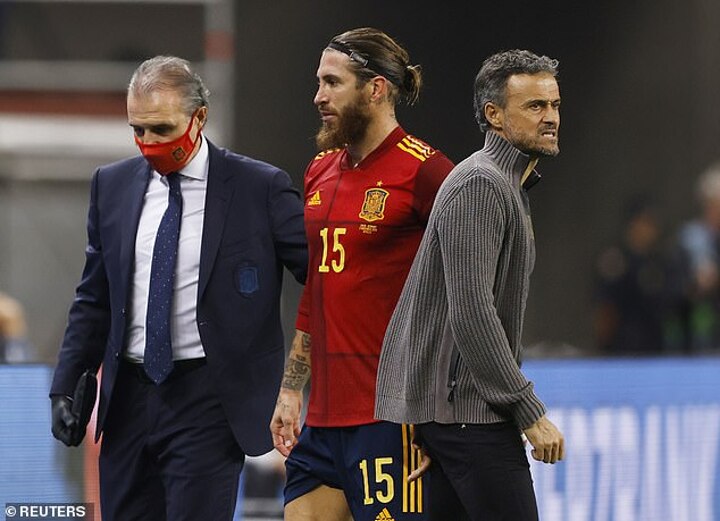 His side face Villarreal, who are currently second in LaLiga, on Saturday before facing Inter Milan in the Champions League on Wednesday.

Real have struggled in both competitions this season - they're currently fourth in the league and third in their European group.

As well as the injuries to Ramos and Varane, Zidane will have been frustrated at Brazilian striker Vinicius Junior travelling over 20,000km without even playing a single minute of football for his country. 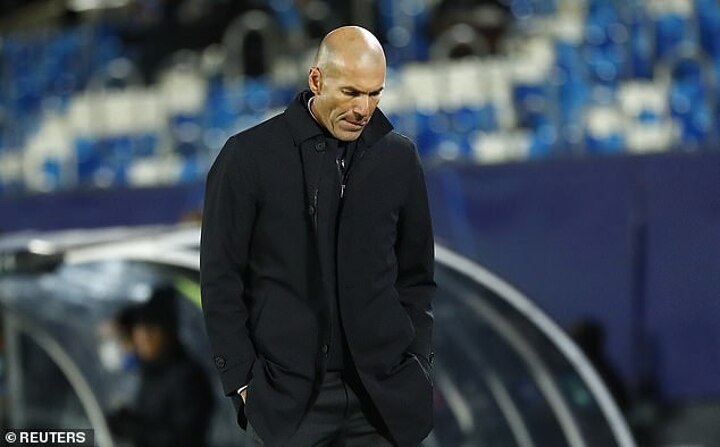 Arsenal were not best pleased when Pierre-Emerick Aubameyang was 'held hostage' while on international duty with Gabon.

The striker and his team-mates were held at Banjul Airport in Gambia for more than six hours overnight on Sunday — after having their passports taken — before being allowed into the country for Monday's Africa Cup of Nations qualifier.

Players were forced to sleep on the airport floor while Aubameyang called on the Confederation of African Football to act. 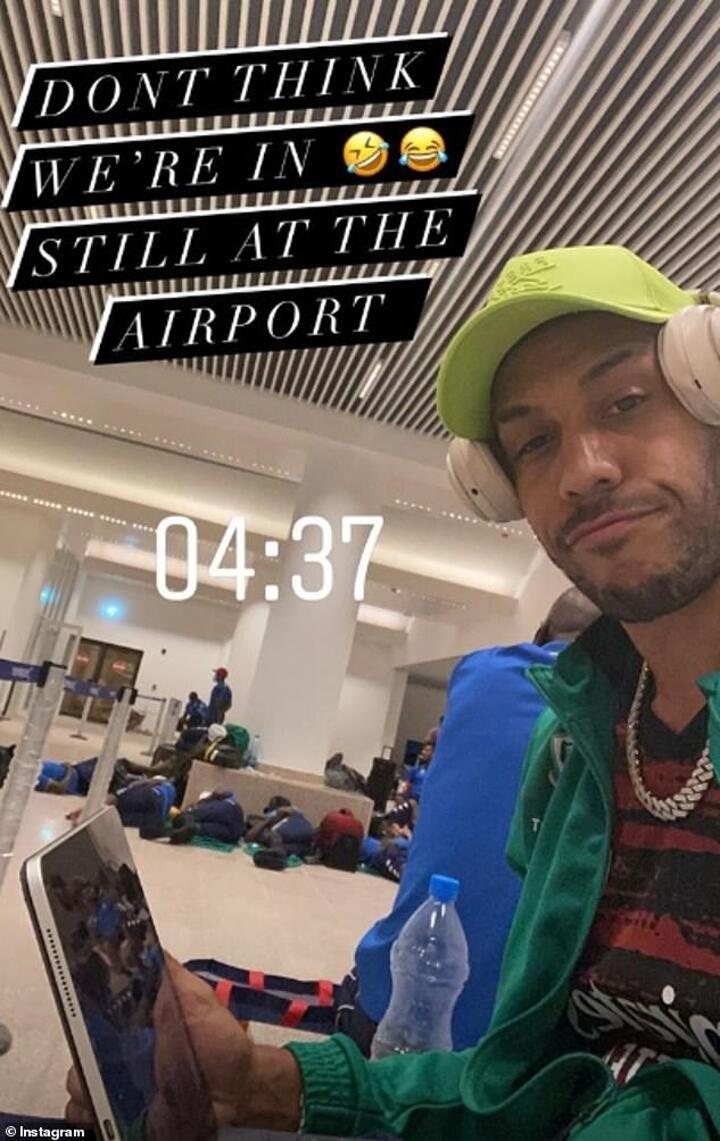 Mikel Arteta will not have been impressed at the treatment of his star striker and it's no surprise Arsenal are considering blocking him from going on international duty in the future, despite it not being the fault of his own country.

Arteta will also have been frustrated at Mohamed Elneny testing positive for coronavirus.

Like Salah, the midfielder will not be able to return to England until he returns a negative test result. 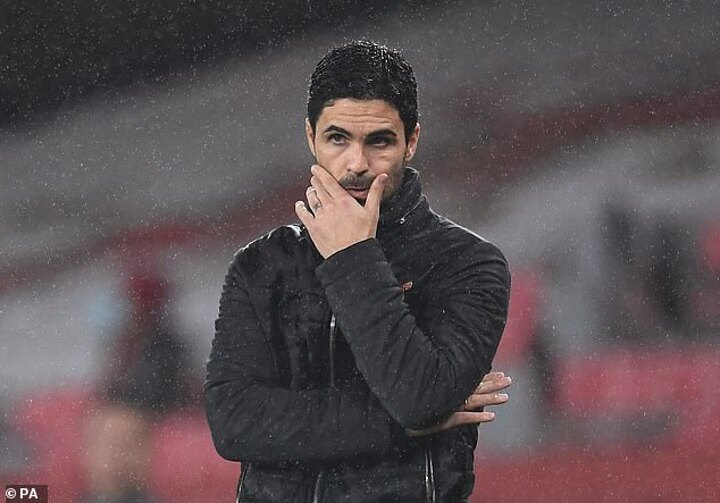 After enduring a difficult start to the season with Manchester United, Anthony Martial could have done with scoring a few goals for his country.

The forward has just one goal in 25 games for France and he didn't make the most of his opportunity against Portugal. Martial started but wasn't able to find the back of the net with any of his five shots.

He was then forced to train on his own after picking up a back injury which kept him out of the game against Sweden.

The forward will be desperate to play against West Brom at the weekend with the fixture a great chance for him to get his first league goal this season, but it remains to be seen if he will recover in time. 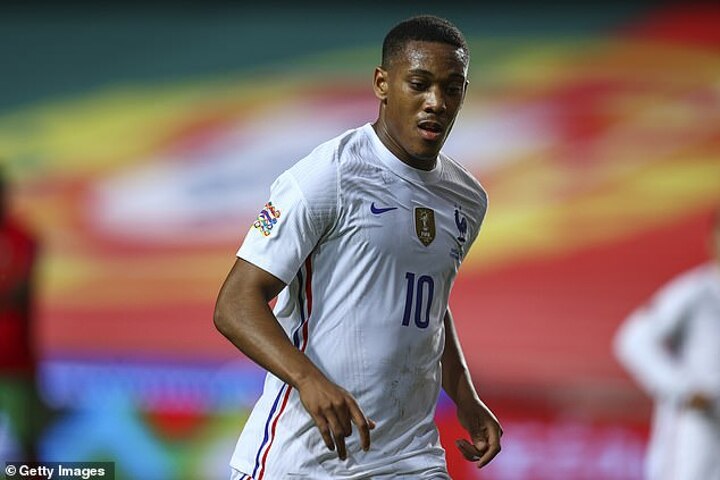 It's not been the easiest start to life in the Premier League for Robin Koch.

The defender gave a penalty away in each of his first two Leeds games and more recently was at fault for goals against Crystal Palace and Leicester.

However, to keep Jerome Boateng and Mats Hummels out of the national side shows how highly he is thought by Joachim Low.

Unfortunately for Koch, he was part of the Germany defence that shipped six goals against Spain - leading to calls for Boateng and Hummels to return.

He was not directly at fault for the goals but his confidence will likely have taken a hammering.

He will have to get over that result in time for Sunday's fixture with Arsenal. 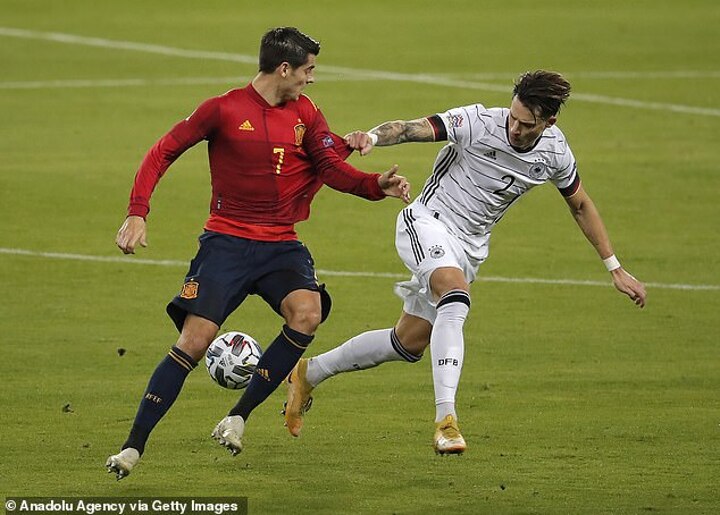 The Chelsea manager couldn't have planned the international break better if he had tried.

All of his stars are returning home healthy and injury free. They've not played badly either.

Eight Blues players scored for their countries with Hakim Ziyech the standout performer with three goals and two assists for Morocco.

Lampard will be hoping his stars continue their good form at Newcastle on Saturday. 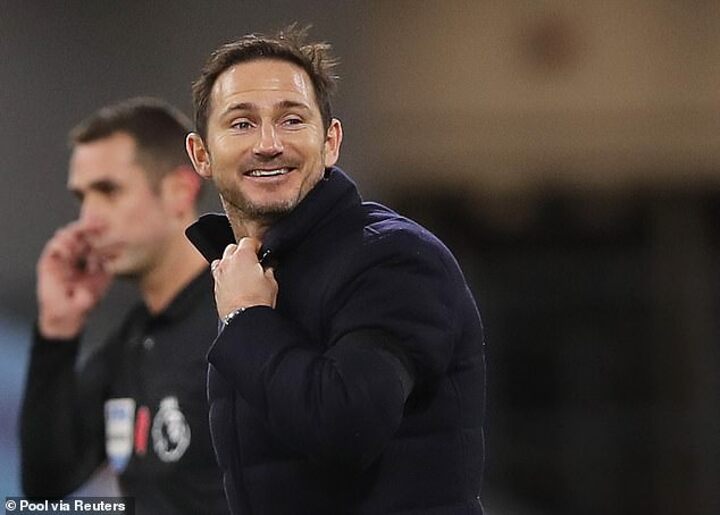 The man everyone is talking about didn't disappoint as he started all three of England's games.

Grealish got an assist against the Republic of Ireland and was by far the standout player in the Three Lions' 2-0 defeat by Belgium.

His sublime backheel flick over Thomas Meunier in the 78th minute was the highlight but he was England's main creator and biggest goal threat.

Southgate confirmed Grealish had '100 per cent' jumped up the pecking order following a fine display and he put in an equally good performance against Iceland.

It was a career-defining international break for the Aston Villa captain and he heads back to his club in the form of his life and with even more admirers. 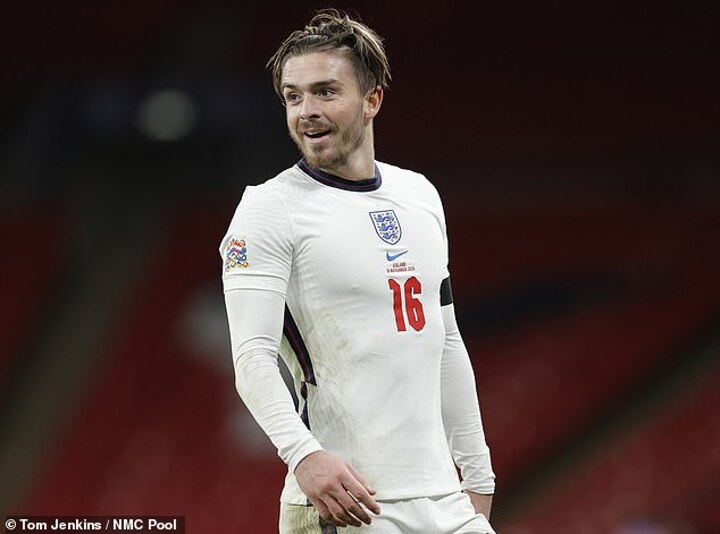 Back in the England team and back in the headlines for the right reasons.

The Manchester City midfielder put in a man-of-the-match performance against Iceland as he got his first two international goals as well as an assist in the Three Lions' 4-0 victory.

Foden was sent home from the squad in September after breaking Covid-19 protocols when he and Mason Greenwood invited two girls back to the team hotel.

But the 20-year-old repaid the faith shown to him by his manager with an outstanding performance on his first Wembley start.

Foden and Grealish were the two shining lights during England's three fixtures - the future looks bright for the two men. 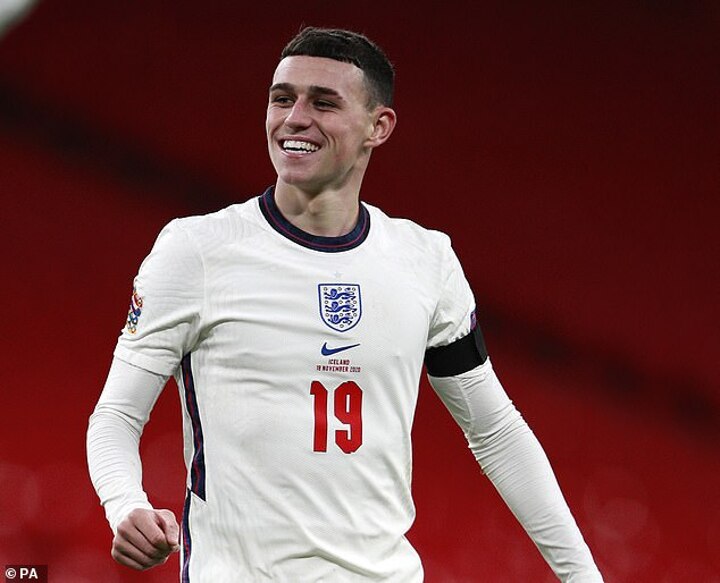 Scoring your first career hat-trick against Germany is one thing. Scoring it in a 6-0 victory is another.

Spain booked their place in the Nations League finals by thrashing the 2014 World Cup winners and Torres was the star of the show.

The forward had previously only scored once for his country but caused the Germans all sorts of problems in Seville with his third strike the pic of the goals as he curled a shot into the top corner.

Torres has been impressive since signing for Man City in the summer with four goals in 10 games.

He is yet to find the net in the Premier League but will be full of confidence as he heads back to England for a big game with Tottenham on Saturday. 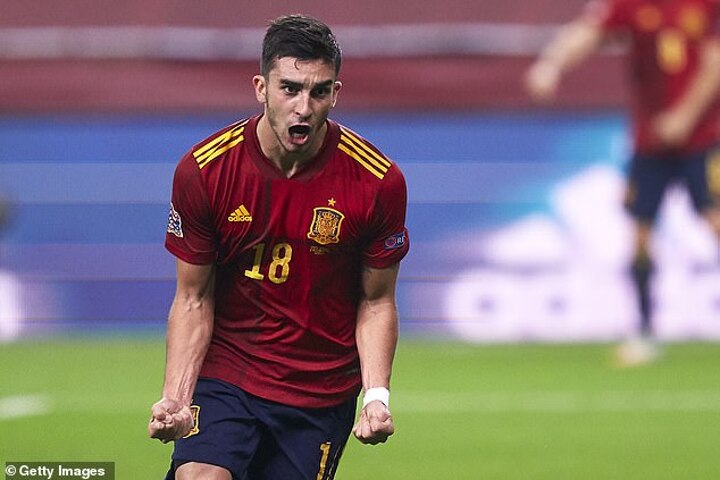 It's been tough going at Manchester United for Daniel James since his initial strong start last season.

His last goal for the Red Devils came in December and he's not managed to find the net in the Premier League since August 2019.

But the winger was back among the goals for Wales with a stunning strike against Finland on Wednesday.

After picking up the ball on the edge of the area, James took a couple of touches before unleashing an unstoppable shot into the top corner.

The goal clearly meant a lot to the 23-year-old and it will have given him a much needed confidence boost as he looks to force his way into Ole Gunnar Solskjaer's starting XI. 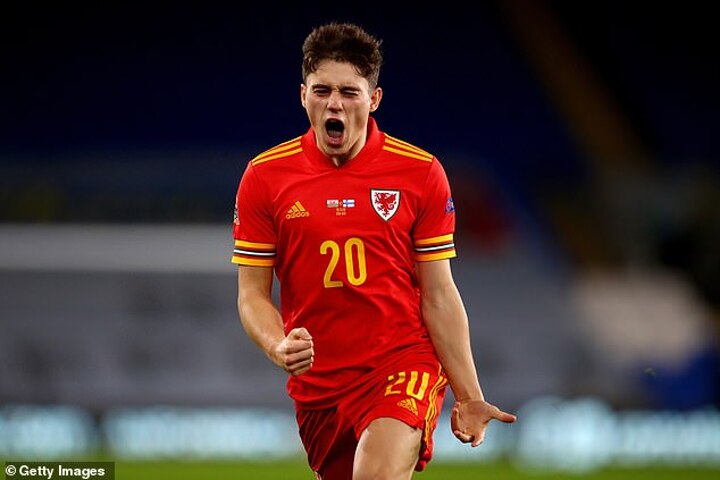