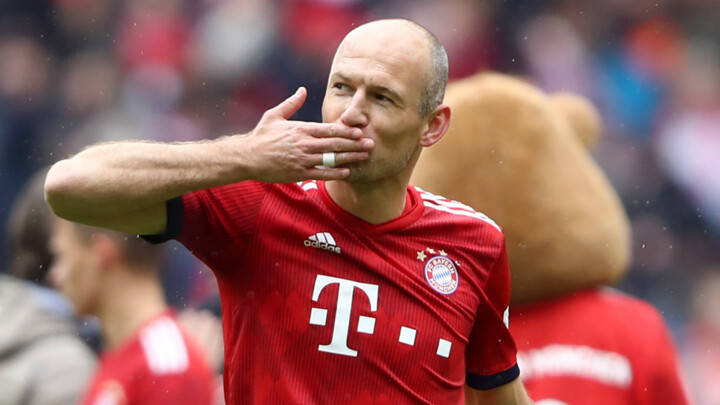 Arjen Robben has said he wants to ends his Bayern Munich career in the perfect way by winning the Bundesliga title.

The 35-year-old is set to depart the club this summer having moved to the Bavarian outfit in 2009.

In that time Robben has played over 300 games for Bayern and has won seven league titles, and he is hoping to make it eight on Saturday.

Robben, who is preparing for his last home match for Bayern, admits he cannot stop thinking about Saturday’s clash.

"This is a very special game and I want to put all my energy into Saturday,” the Bayern No.10 told the club’s official media channels.

“It would be sensational [to score],” he admitted, "I’ve played out the game on Saturday three times in my head.

"Those were just dreams, but you have to make dreams come true and I'm convinced that it can happen,” he added.

Robben has enjoyed an incredible level of success at Bayern during the last decade and famously netted the winning goal in the 2013 Champions League final against Dortmund, as well as claiming four DFB-Pokal winners’ medals.

The attacker claimed the club have vastly improved compared to side he joined in 2009.

“[It was] the best and most important step in my career,” said Robben. “The club has come a long way and I'm proud to have played my part.”

Robben will have the chance to represent Bayern one more time after Saturday’s game, when the German champions take on RB Leipzig in next week’s DFB-Pokal final.

The former Dutch international also revealed he is desperate to bow out by winning the double with Bayern.

“It’s in my character, maybe my parents are to blame. Without this mentality, I might not have made it so far.”