I have a picture in my mind about Arsenal. It comes from February 2003 and a game they played against Manchester City at Maine Road. 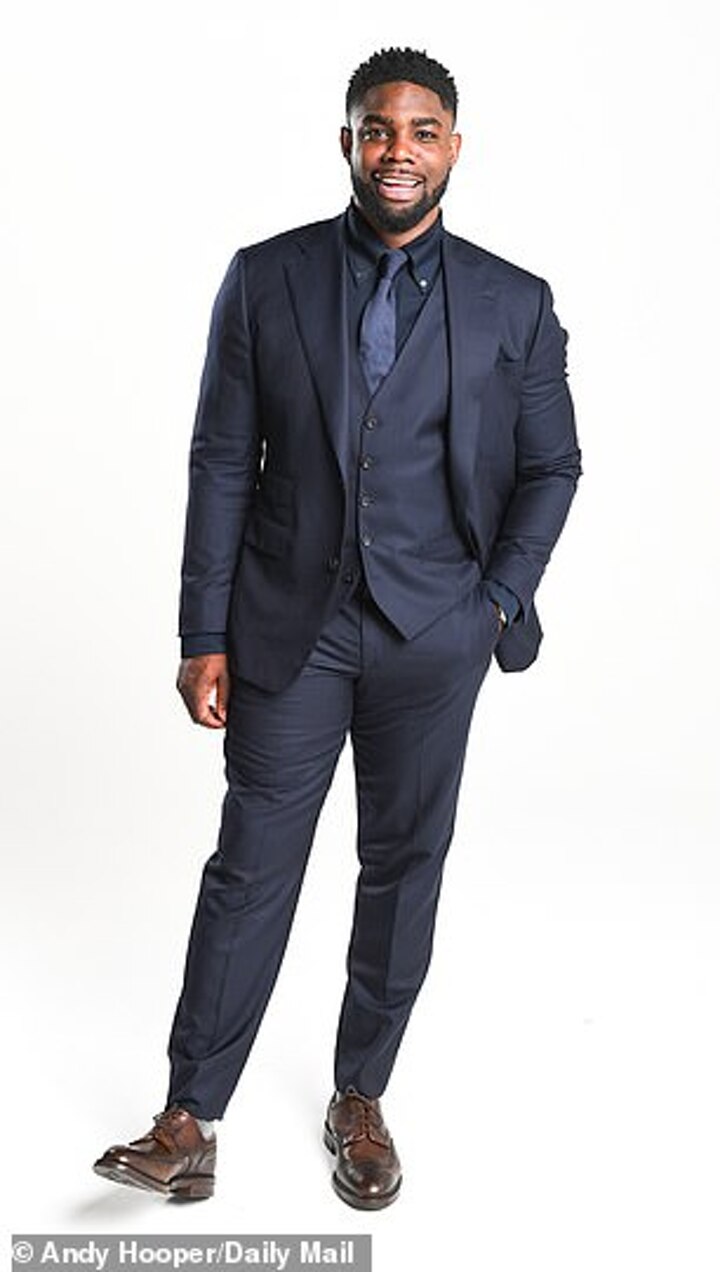 Though I grew up in Leeds, Arsenal were my team as a kid so I was never going to miss any chance to see them live. This particular Saturday, 17 years ago, I had been playing for City’s academy in the morning and then headed over to the old stadium.

The reason the memory is so vivid is because of the football I saw that day. It was one of the greatest performances I’ve ever seen, a display that had me in awe. Arsene Wenger’s side were 4-0 up inside 19 minutes and ended up winning 5-1.

My view of football back then was simple: Manchester United had the best players and most success; Liverpool were a club with heart and soul but Arsenal played the greatest football. Arsenal had style, everyone wanted to be like Arsenal.

This time last year, though, Arsenal had become a laughing stock. The team was drifting, it was all too much for Unai Emery and perhaps it was exacerbated by the reaction and hysteria that appeared on Arsenal Fan TV.

Many supporters from other clubs rubbed their hands after every bad result, so they could log on and watch the shouting and screaming as some Arsenal fans started to turn on their own players. It is nearly 12 months to the day, remember, since parts of the Emirates Stadium booed their captain Granit Xhaka.

I thought it would be a long way back for Arsenal but it has proven to be anything but. Nobody is laughing at Arsenal now and, for that, the credit belongs to Mikel Arteta. The start he has made to his managerial career is outstanding - and it is not just because he has won two trophies. 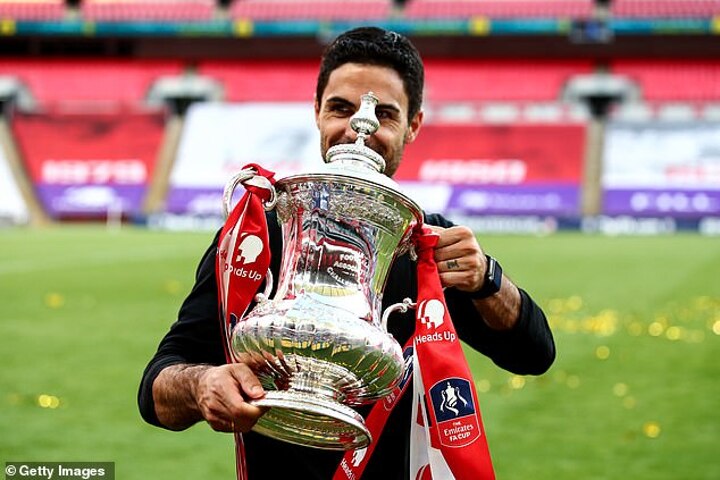 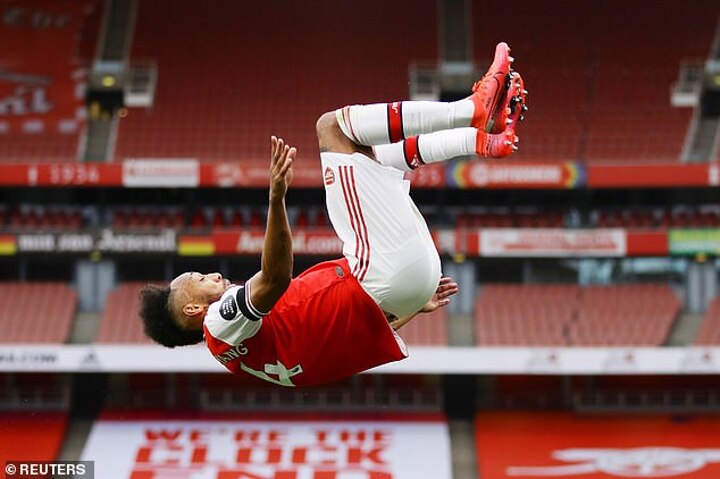 Losing Arteta was a big blow for City. I got a glimpse into the way he works last year, when I was at the training ground doing some ambassadorial work. Arteta was taking this particular session and I was struck by the way he was dictating what he wanted from the players - and how they responded.

Every one of them was listening intently. I don’t know whether it was because the group was experienced or because they had so much respect for Mikel being around them, but the parts of the session I watched were so, so good. People have only ever told me positive things about him.

He has taken everything great from Pep Guardiola and then put his own twist on things. He has instilled discipline and made it clear there will be no messing around - just look at the way he has dealt with issues such as Mesut Ozil and Matteo Guendouzi. 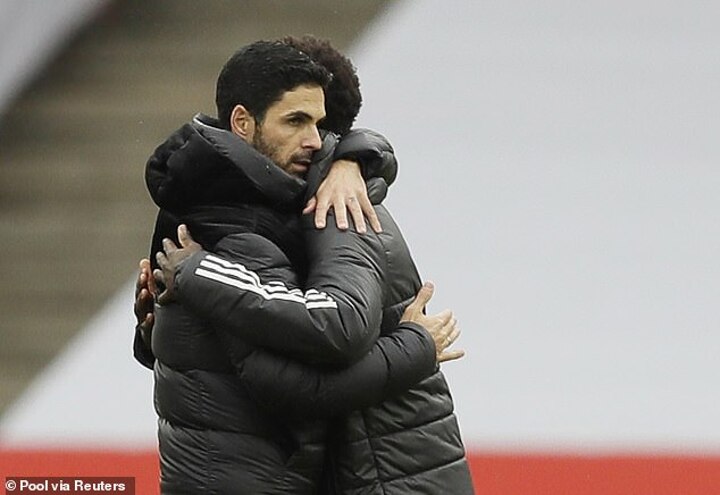 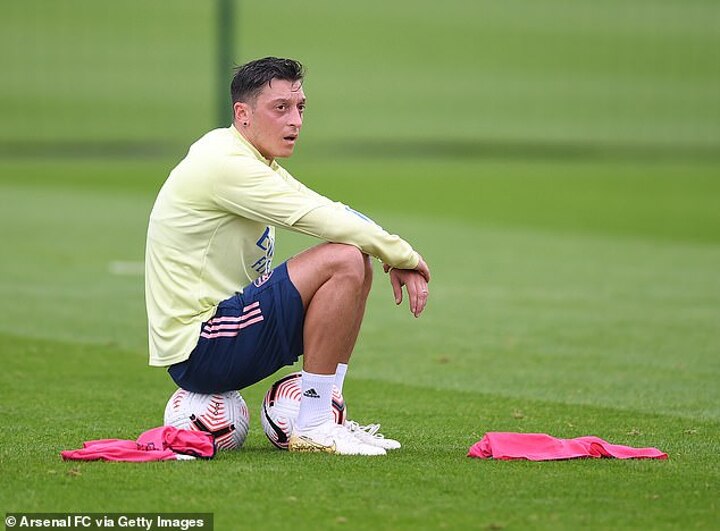 Ozil isn’t playing for Arsenal because he won’t press the way Arteta wants him to. If it had anything to do with ability, Ozil would be in. If a player has flair and is willing to work, you always find room for them.

What I love about the way Arteta has handled Ozil is that he hasn’t allowed one bit of animosity to creep out into the sport pages.

We don’t know whether they are locked in a feud or if there has been a row because the manager deals with everything so clinically. It’s a real skill, that. It’s easy for news of rifts to leave the training ground but Arteta has taken care of this so expertly.

Arteta won’t stand for any messing and it is no coincidence that Guendouzi has been sent on loan to Hertha Berlin, having not kicked a ball since a game at Brighton in June. 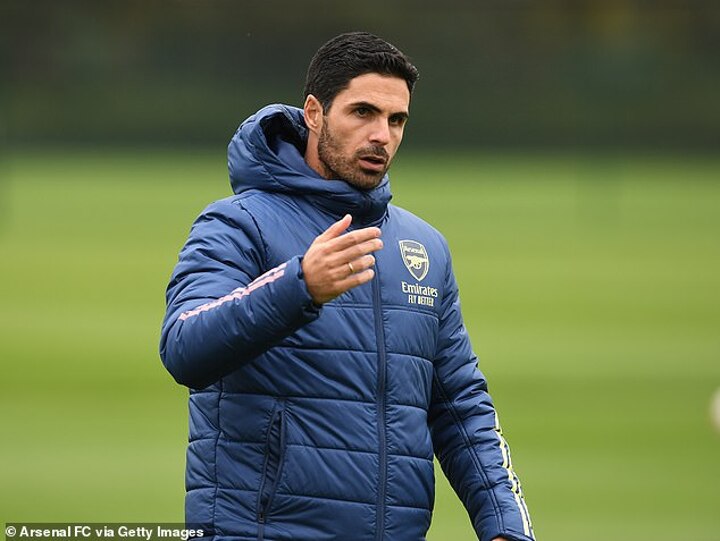 Guendouzi was involved in a spat with Neal Maupay and was said to have asked Brighton’s players how much they were earning. Whatever happened, Arteta didn’t stand for it and sent him on his way. It’s firm and decisive action that showed who is in charge. There is nothing soft about Arteta.

What I think is important to point out, however, is the fact this is only a start. Arsenal are in a good moment but let’s be honest - he hasn’t lifted a side that was marooned at the bottom of the table and taken them to unprecedented heights.

This is Arsenal and Arteta walked into a club that had one of the world’s best strikers in Pierre-Emerick Aubameyang, a £72million winger in Nicolas Pepe; he’s signed Willian and he’s got a brilliant talent in Eddie Nketiah emerging.

When you add in that they have just signed Thomas Partey - what an unbelievable piece of business that could prove, as the Ghanaian was outstanding for Atletico Madrid - Arteta has got a lot of quality to choose from. Arsenal, really, should be looking at the top four. 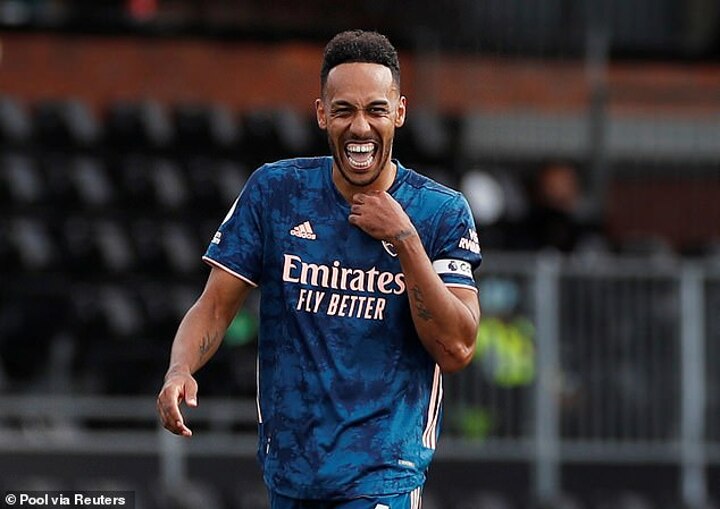 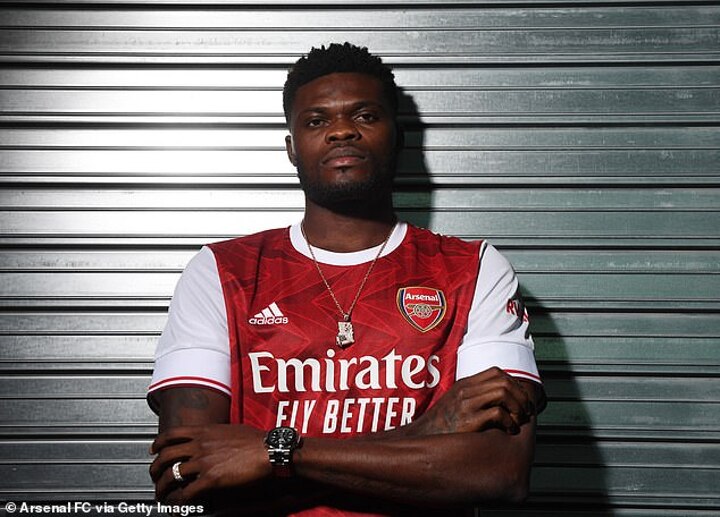 Arsenal’s defence still bothers me (is Gabriel the right standard?) but it is evident they are moving in the right direction.

They are a long way from the peaks that Wenger brought but the picture is improving.

Most importantly, nobody is laughing at them any more.

MICAH'S MAN OF THE WEEK

The international break was good for Kai Havertz, who scored for Germany against Switzerland. Timo Werner also scored in that game and the match could have positive effects for Chelsea.

Havertz looked totally out of sorts in his first games in England but after his hat-trick in the Carabao Cup I got the impression that things were beginning to change for him.

He is under scrutiny because of the size of his £89million transfer fee but I can see Havertz making big steps in the coming weeks. 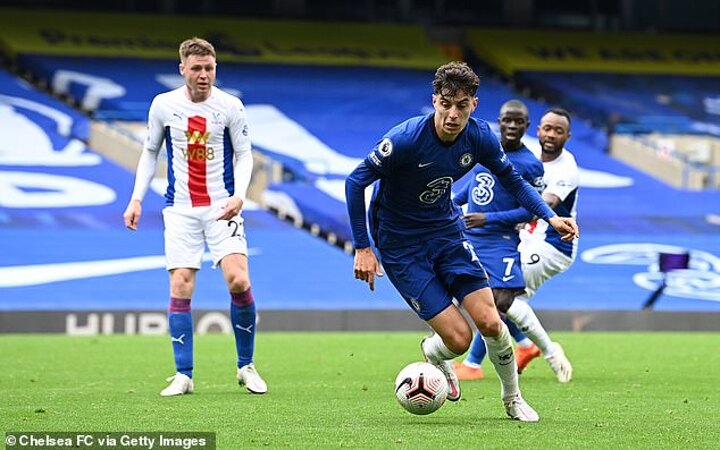 WHY TRENT HAS TO PLAY EVERY GAME

When Dani Alves was at the peak of his game, would Brazil ever have left him out?

I ask that after the latest England matches. We now have Trent Alexander-Arnold, the best right back in the world, but for some reason he doesn’t play as much as he should. I’m not taking anything away from Reece James, who was excellent against Denmark, but I can’t work out what’s happening with Trent.

Alves was so good, he was there all the time for Brazil. Why is that not the case for Trent with England? I feel confused after these games because the system Gareth Southgate wants to go with doesn’t seem to suit anyone. 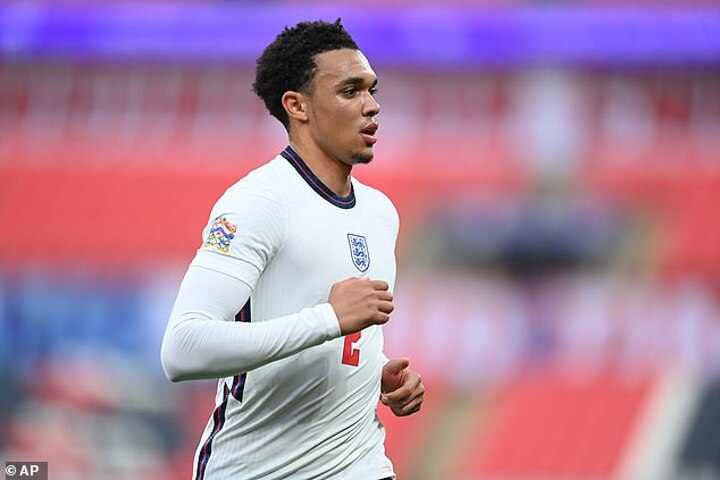 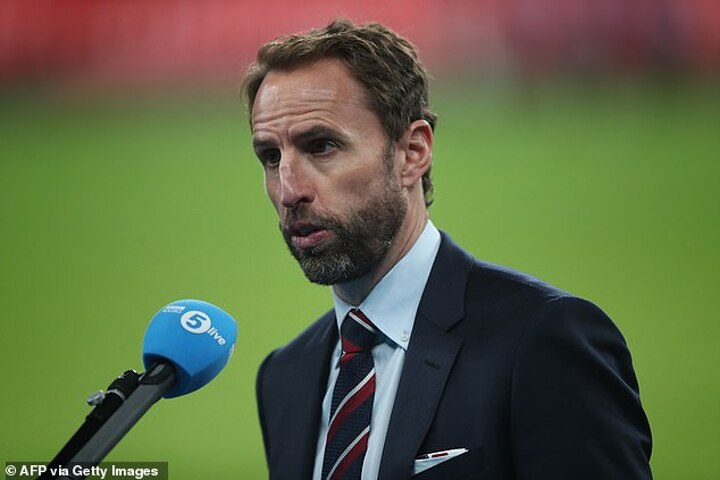 How come Harry Maguire was playing on the left side of a three-man defence when he never plays that role for Manchester United? Why was Joe Gomez, the best footballing central defender, in the stands? What had Jack Grealish done wrong to get no more minutes after the Wales game?

It feels as if it is one rule for some players in the squad and one rule for others. Take Jordan Pickford - his form has been poor but he plays all the time. Marcus Rashford isn’t at his best but he starts, no matter what.

Imagine how Danny Ings felt when not getting a fair crack at starting. I don’t envy Gareth Southgate in what is a difficult time to be an international manager.

I’ve got the utmost respect for him but, as I see things, the balance of the team is not there at the moment. Will that balance ever be there if he doesn’t pick his best players?