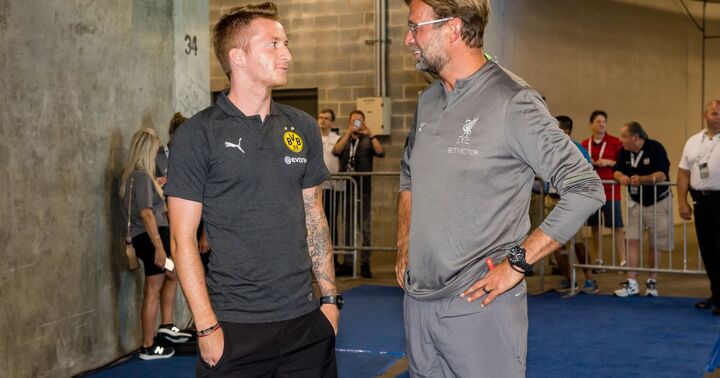 Klopp and Reus worked together in Dortmund to great effect, with the team making a surprise run to the final of the 2013 Champions League. Before the Germany international arrived at the Westfalenstadion in 2012, Klopp had already steered the team to two Bundesliga titles.

Under Klopp, Reus was able to develop his game and while injury problems have hampered his development in recent years, the 32-year-old remains one of the most effective forward players in the German top flight.

In an exclusive interview with the Daily Mirror ahead of Saturday's FA Cup final between Liverpool and Chelsea, Reus offered his thoughts on what makes Klopp such a brilliant football manager.

"Jurgen is a special person," he said. "I remember when I moved to Dortmund and had the first conversation with him. When he walks into the room, there's just something in the air. He's charismatic, he's got a lot of energy, and he's just a good guy to just talk to privately about other things, not just football."

"He's definitely one of the best coaches in the world because otherwise you don't stay at the top for so long. I hope for him that he manages to do it (the quadruple) this year and I wouldn't put it past him."

A win on Saturday for Liverpool would make it two trophies for the season, with the League Cup already landed and a Champions League final against Real Madrid to follow later this month.

The Reds trail Manchester City by three points in the Premier League race and Pep Guardiola's side can effectively clinch that prize if they beat West Ham United at the London Stadium on Sunday.