Ralf Rangnick’s first introduction to English football came as a 21-year-old in 1979 when he had a rib broken on his first appearance for non-league side Southwick FC. 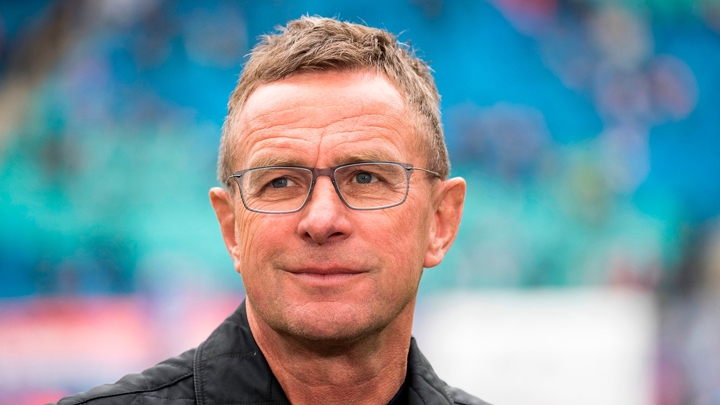 He’ll be hoping his second introduction to first-hand involvement of English football will be a little gentler, with the German set to take charge of Manchester United for the first time in Sunday's Premier League clash with Crystal Palace.

It sounds cliched but when Rangnick walks out at Old Trafford it will be a dream come true; an achievement accomplished. He had always wanted a job in England – but it had to be the right job.

He spoke with Chelsea director Marina Granovskaia about taking over at Chelsea but turned the Blues down because he was only offered four months at the helm.

Even when Manchester United came calling last week, there were initial reservations because he was once again being offered an interim job, albeit this time for six months.

However, when Ed Woodward threw a two-year consultancy role into the mix, Rangnick felt that the time was finally right for him to return to England.

Rangnick was studying English and PE at Stuttgart University at the time and spent his year abroad in Brighton.

He became a regular at the Goldstone Ground but would often travel to London to watch Arsenal and Tottenham, while he occasionally made the trip up to Liverpool to see Everton in action at Goodison Park.

“Ralf was a fan of the English," St Gallen coach Peter Ziedler, who studied with Rangnick, told GOAL.

"He watched mostly English games. Coaching in England was a dream for him."

Zeidler spent three years as Rangnick’s assistant at Hoffenheim between 2008 and 2011 and when the pair were travelling, either for games or on scouting missions, Rangnick would seek out an English newspaper at the airport to catch up with results.

“He could give you all the clubs in the English third division,” Zeidler added.

Even when Rangnick was at Lokomotiv Moscow, where he took a position as manager of sports and development in the summer, he was still talking to his friends about a move to England.

“A few weeks ago, he was telling me that we should take a League One or League Two club and do the same thing as with Hoffenheim or Salzburg and Leipzig," Zeidler revealed.

"He is fascinated by England, by the language and by English football. In this kind of context, one always tends to exaggerate, to say that it is a dream come true. But, for him, it's the truth.

"He has always admired Arsene Wenger's Arsenal and his use of young players. When we were at Hoffenheim from 2008 to 2011, he always wanted to do what Arsene did.”

His penchant to play young players will be music to those at United's academy, who rightly proud of their long and proud tradition of producing first-team players.

However, before he starts prioritising the next generation of stars, he needs to get the senior side to click first.

Rangnick met the players at Carrington on Friday but already had an idea of the task that awaits him having watched their last five Premier League games.

“Yesterday's game [against Arsenal] was exciting for the fans, but even for myself, as the future coach, those are not the kind of games that we need every day because football, for me, is to minimise the coincidence factor and have control and gain control of a game,” Rangnick said in his first press conference.

“This is football, what it's about. This is my approach and I will try to help these outstanding, talented players to try to keep away from their own goal.”

The 63-year-old has made a good first impression with everyone who has met him in the four days he has been in Manchester.

He has come across as intelligent, calm, laidback and knowledgeable during a half-hour, in-person press conference at Old Trafford.

He started with a joke about the early timing of the meeting, had a light-hearted rebuttal for a question on signing Erling Haaland but, most importantly, he was clear in his objectives for this team.

Speak to anyone who has either played under Rangnick or worked closely with him and the common theme is that hard work is key.

He is meticulous in his detail and in implementing his philosophy. At previous clubs, he brought in a countdown clock at the training ground which would be used for a game called the 'eight-second rule'.

The players can hear the ticking and know they have to get the ball back within 8 seconds, or if they have possession, they need to take a shot on goal within 10 seconds. There’s nowhere to hide.

“He is very demanding,” Andreas Beck, who worked with Rangnick at Hoffenheim, told GOAL. “Like all good coaches I experienced, he used the losses to teach you. Over time, I had two great years with him.

“When Ralf became part of the Bundesliga, he definitely innovated. We played this unbelievable pressing game with Hoffenheim.

"It was an attacking style, with no time to breath, always hunting and, at the start, we were going for the first spot. No one knew Hoffenheim but it was something new.”That pressing style which so many of the top teams play now is no longer new, of course. It is how Manchester City have dominated the Premier League for the last decade and what makes Liverpool so successful under Jurgen Klopp.

However, for all the talk of Rangnick’s famed ‘gegenpressing’, it was not his most repeated phrase in his press conference on Friday. Instead, the focus was on control; something United have lacked for a long time.

"Whenever I came to other clubs in the middle of the season, which was the case in Stuttgart or Schalke twice, you have to make sure that you have the biggest chance to win the next game," he explained. "That is what it's all about and then, step by step, let the players participate.

"They have to go together with me, they have to follow not only my instructions but they have to buy into the idea that I can offer them how we should want to play in the future/

"That is what it’s all about. It has to happen step by step. It cannot be done within one or two days. It will not work like that.”

With so little time on the training ground to implement his ideas on this team due to the fixture schedule, it is not a fix that is going to come quickly. So, the plan, in the short term at least, is to start to get a hold of games.

"I think that in order to gain control we have to play proactively, no matter if we have the ball ourselves or if the other team is in possession," he said.

"It's about helping the team to play together, it's about togetherness, it's also about team spirit.

"It's not about playing pressing or counter-pressing for the sake of it. It's about control. This is the major target."