Sky Sports News reporter Paul Gilmour takes a look at the Northern Ireland side taking part in their first ever European Championships, starting against Norway on Thursday. 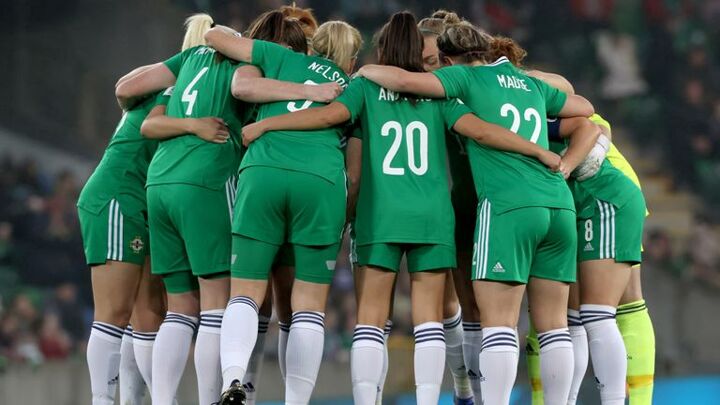 Northern Ireland's number one keeper finished her season in Sweden before joining up with the squad. A dog lover who listens to podcasts and enjoys jigsaw puzzles to unwind, Burns says Beth Mead has been her toughest opponent.

Made a crucial save in qualifying against Wales. Flaherty loves CrossFit and water sports. Aberdeen born, she was once nationally ranked in badminton in Scotland and previously won the U15 Scottish girls handicap competition in golf. As a footballer, she won Scottish Women's Premier League player of the year at the age of 15 while playing for Buchan.

The 20-year-old is currently combining her football with studying for a psychology degree at university. A central midfielder with only seven caps, she made her first senior start against England at Windsor Park in April. Andrews scored her only Northern Ireland goal recently against group opponents Austria. 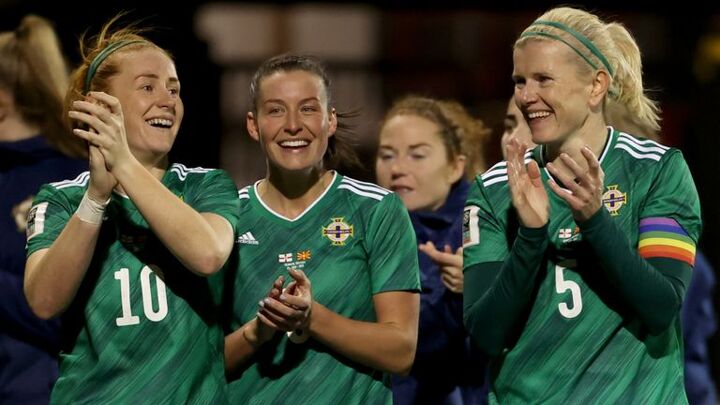 The 21-year-old defender made her first competitive start for Northern Ireland at Wembley against England. Burrows, who usually works night shifts, is one of the many part-time players hoping to impress on the biggest stage.

Scored in the home play-off game against Ukraine to help send Northern Ireland to the tournament. Caldwell, who played in Australia for two-and-a-half years, also represented Northern Ireland in the 2018 futsal European qualifiers. 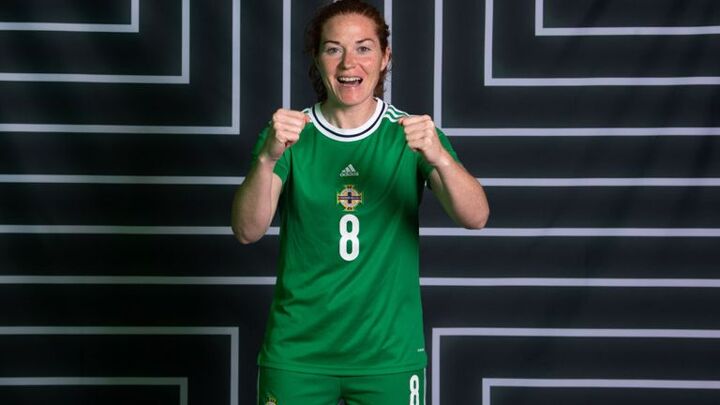 Her return from injury in time for the tournament prompted her team-mates to give a guard of honour as she arrived for training at St Mary's this week. The popular captain scored in the play-off win over Ukraine and says Caroline Graham Hansen of Thursday night's opponents Norway is the best player she's faced.

Furness scored a crucial goal in Belarus during qualifying, helping her team to secure a play-off. The Liverpool midfielder has scored more goals (38) than any other Northern Ireland player. Her grandad was her biggest inspiration growing up.

Holloway, from Bristol, was visiting her Northern Ireland-born Gran when she was asked to play in a game of football. During the match she was spotted by former Northern Ireland boss Alfie Wylie who invited her to a training session. A former Birmingham player, Holloway is now playing in America.

With 114 caps, the defender has experienced the good and the bad times in Northern Irish football. Shortly after qualifying she suffered a serious knee injury but the rescheduled tournament has allowed her to recover in time. Celebrated her 100th cap by scoring a crucial 94th-minute equaliser against Wales in qualifying.

A central midfielder who enjoys the "thrill" of receiving the ball deep to help start attacks. A keen member of 'coffee club' - a group of players who meet in the hotel reception to take a shot of espresso before getting on the bus to games. Growing up, McCarron took inspiration from Steven Gerrard and Xabi Alonso.

The first Northern Ireland women's player to score at a UEFA tournament when she netted against Scotland in the U19 Euros in 2017. Adores her dogs George and Ralph. McDaniel says Lauren Hemp has been her toughest opponent. The midfielder loves a prank and recently called teammate Sarah McFadden, convincing her she was a reporter wanting to do an interview about Northern Ireland's achievement.

Answered multiple questions in Louise McDaniel's 'interview' before realising she had been played! A no-nonsense centre-back, McFadden is a PE teacher and loves teaching volleyball, tennis & badminton to her students. Another of the team who mentions Caroline Graham Hansen as her toughest opponent and will be facing her again tonight.

Made her senior debut against Thursday night's opponents Norway. Named in the squad along with sister Kirsty - they will become the second pair of siblings to represent Northern Ireland at a major finals after Jonny and Corry Evans. Scored her first senior goal against the Faroe Islands on a night Kirsty scored too.

The older of the sisters, Kirsty is a tricky winger who scored on her 50th appearance for Northern Ireland. An understanding management team in her retail day job allowed McGuiness to be committed to her football over the years.

The 20-year-old right-back has already won 20 caps for her country. Enjoys tennis, golf and basketball. A tenacious player, McKenna has broken her collar bone four times in the same place!

Recovered from cruciate surgery in time to join the other part-time players in a full-time training camp since January. A keen tennis fan, Magee draws inspiration from Rafa Nadal. Ferran Torres is her football hero. 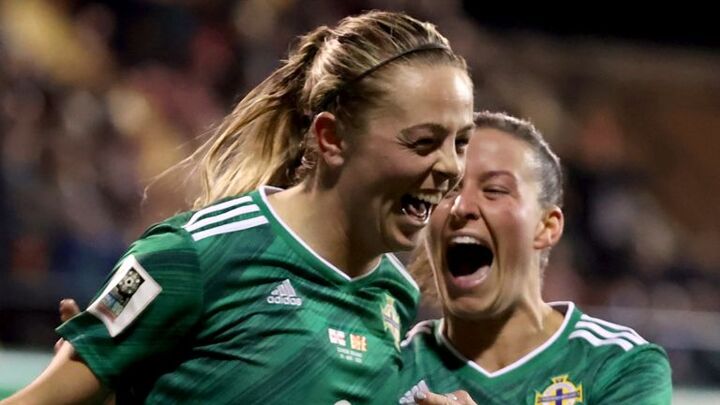 Holds the record for the fastest international goal in women's football, scoring against Georgia after 11 seconds in 2016 to beat previous holder Alex Morgan. Magill has recently signed for Aston Villa. She was the first female professional footballer in Northern Ireland.

Has earned 125 caps for Northern Ireland. Centre-back Nelson was named as a goalkeeper and a defender for the U19 qualifiers in 2002. She had to use tape to make sure the keeper kit and outfield kit had the same number. She made her senior Northern Ireland debut in 2004 and has also represented Ulster and Ireland at underage level in hockey.

A keen piano player, Rafferty plays her club football in Southampton, where Northern Ireland will play all three group games. Playing in her hometown is extra special because her dad, who has a heart condition and can't travel to Belfast, will watch her live for Northern Ireland for the first time. Now a centre-back, she started out as a striker.

Uncapped Turner has come in to add competition for the other goalkeepers. The call up comes at a time she has rediscovered her love for the game. Away from football she enjoys playing and watching cricket. She is a self-confessed fan of giraffes, describing herself as "crazy" about them.

Missed the play-off win over Ukraine after surgery on a cruciate injury. Scored a free-kick against group opponents Austria in a World Cup qualifier. One of the characters in the squad, Vance captained the team in the recent friendly against Belgium. Has won 75 caps for her country.

Away from football Wade is a funeral director at the family business. Was a track runner at school but football always came first. Scored against Wolfsburg for Glasgow City in the Champions League where she faced her toughest opponent Pernille Harder.

Almost there years ago when Northern Ireland opened their qualifying campaign against tonight's opponents Norway, Wilson was studying for her A-Levels. Fast forward to the tournament and 20-year-old Wilson, who found Leah Williamson her most difficult opponent, is one of the youngest members of Kenny Shiels' squad. 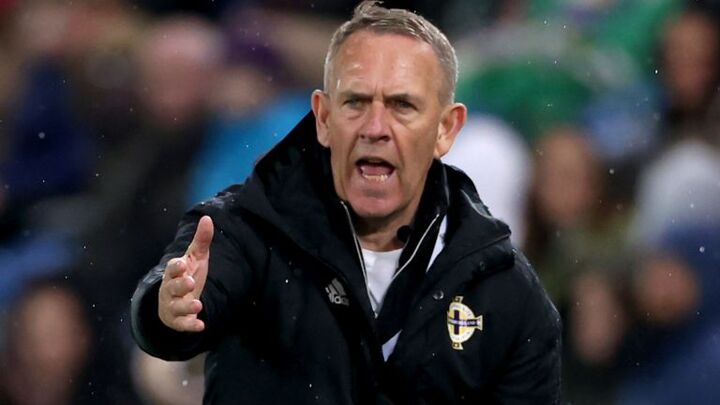 Has won 10 trophies in a management career that included spells in Northern Ireland, Scotland and Thailand, including the 2012 League Cup at Kilmarnock. The 66-year-old has been described as "a father figure" to the squad by captain Marissa Callaghan. Son Dean, a former Northern Ireland international, is part of his coaching staff. Shiels is incredibly proud of his players and his mobile phone cover is a custom-made picture of them celebrating that special victory against Ukraine.

Keep up with all the latest from Euro 2022 across Sky Sports and Sky Sports News this summer.

Coverage will be anchored by Sky Sports WSL presenter Caroline Barker, alongside Jessica Creighton and Kyle Walker. Meanwhile, Karen Carney, Sue Smith, Courtney Sweetman-Kirk and Laura Bassett will give analysis throughout the tournament.

The pundits and presenters will work from the Sky Sports Women's Euro 2022 Mobile Presentation Bus, which will follow the Sky Sports News team around the country to the various stadiums where matches are being played.

In addition, Sky Sports' Essential Football Podcast will be rebranded for the tournament to Sky Sports Women's Euros Podcast from 21 June. Hosted by Charlotte Marsh and Anton Toloui, it will feature exclusive news and player interviews in addition to a strong programme line-up around the tournament.

Group A: England vs Austria - kick off 8pm, Old Trafford

Group B: Spain vs Finland - kick off 5pm, Stadium MK

Group B: Denmark vs Finland - kick off 5pm, Stadium MK

Group A: Austria vs Norway - kick off 8pm, Brighton and Hove Community Stadium

Group B: Finland vs Germany - kick off 8pm, Stadium MK