The tiny abandoned Scottish village which gave birth to Bill Shankly has been given new life with the opening of a new heritage attraction and a restored memorial to legendary former Liverpool manager. 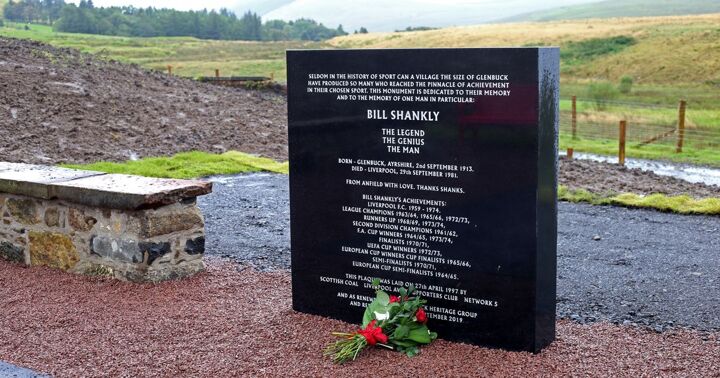 Members of the Shankly family attended the unveiling of the Glenbuck Heritage Village, which is now open to the public, along with a delegation from Liverpool supporters union Spirit of Shankly and invited guests from the local community and the various bodies involved in the restoration.

The mining community of Glenbuck is regarded as one of the most prolific breeding grounds of footballers in the world with over 50 professional players emerging around the turn of the 20th century despite it only ever housing at most around 1,700 people, the East Ayrshire region also being responsible for the iconic managerial triumvirate of Shankly, Matt Busby and Jock Stein..

The decline of opencast mining in the area led to the demise and demolition of much of the village but, after years of lobbying from native campaigners, a joint initiative from the Scottish Mines Restoration Trust and East Ayrshire Council has seen the site of the village redeveloped. 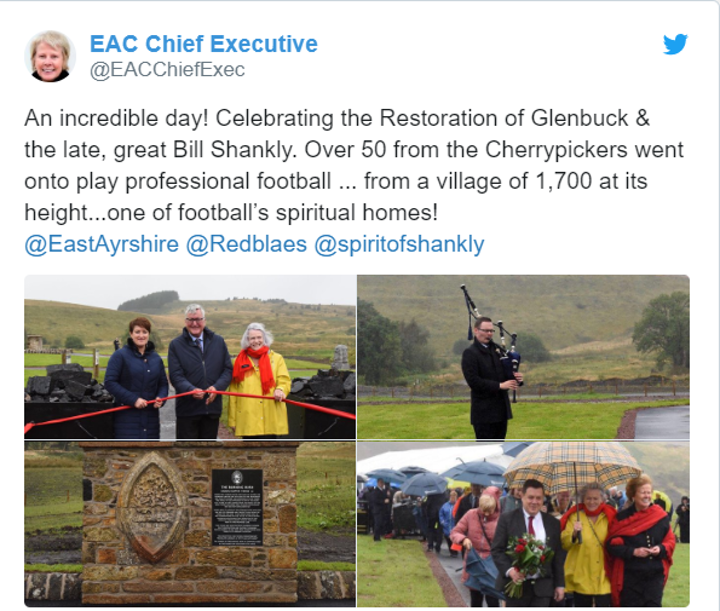 The memorial to Bill Shankly initiated and funded by Liverpool supporters in 1997 has been relocated to the spot where the Shankly family home once stood, with a number of further memorials moved from the nearby village of Muirkirk, along with a new memorial to the community's football team - the Glenbuck Cherrypickers - and the installation of a number of information boards to give visitors an insight into the history and cultural significance of the place.

Bill Shankly's niece, Barbara Alexander, was born in Glenbuck and has been involved in the campaign to revitalise the village since it began nearly two decades ago.

She formally opened the site along with fellow family Cheryl Hynd and Fergus Ewing MSP and said it was a dream come true to see the rejuvenation of Glenbuck. 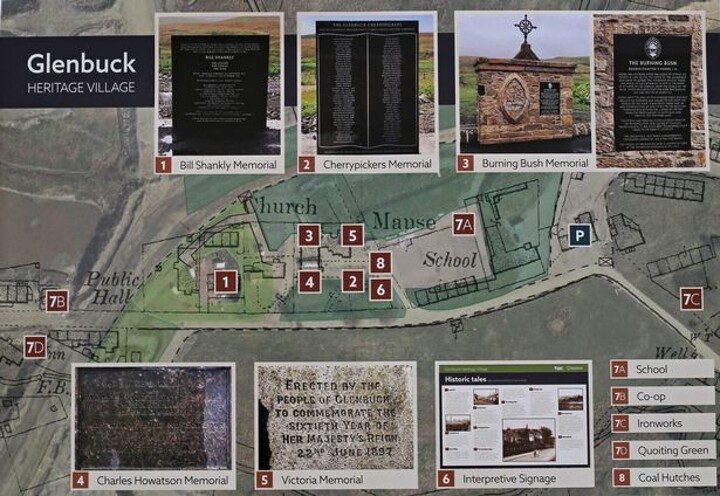 "I always hoped there would be houses built in Glenbuck again and while we're not there yet, the heritage village is the first phase and it's wonderful to see.

"My uncle Willie would have been so proud to see so many people here today to remember him, especially on his birthday." 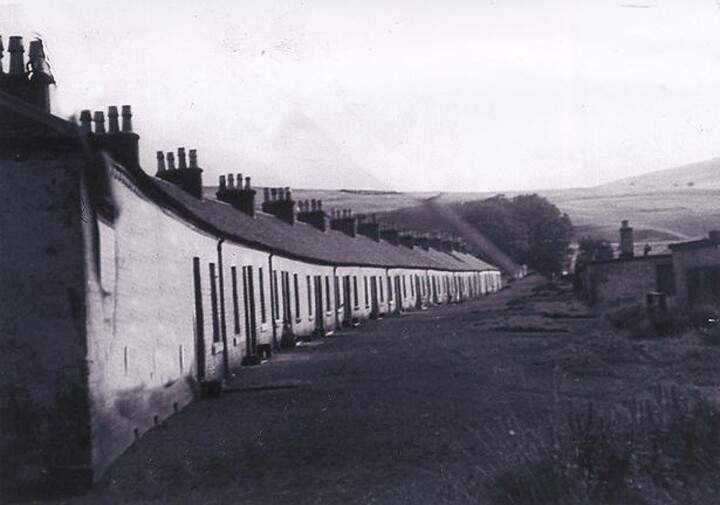 She said: “I was brought up in Glenbuck and left when I was 15 years old. I have so many fond memories of my childhood here and to have something tangible like this that reminds me of that time is amazing.

“I never thought I'd see anything on this scale – the home I lived in, the houses I visited and the vast playground of history is on display for the world to appreciate. I'm so thankful to everyone who has worked to help keep this heritage alive."

Among those who travelled up from Merseyside was one of Bill Shankly's granddaughters, Emma Parry, who has been Guest Relations Manager at the Shankly Hotel in Liverpool since it opened in 2015.

"It has been an amazing experience to travel up to Glenbuck with people that absolutely idolise him, the Spirit of Shankly union which is so dear to my heart, to see this new memorial unveiled in a place which is like hallowed ground.

"To see the impact my grandad's memory still has on people is quite profound really. It's people who have been raised with beliefs to strive for what you believe in, that ethos to work together as a team to be the best, that sense of loyalty and community which was such a big part of who he was as a man and a football manager and these were things he learned in Glenbuck but are also the characteristics of Liverpool people.

"It was quite poignant to hear how there were more than 50 top level footballers who emerged from the village which was a community of only around 1700 people and they still had that kinship, it's all about family and looking after each other."

Spirit of Shankly committee member Stephen Monaghan said: “We are delighted and privileged to be here. Bill Shankly built and made our club what it is today.

"His spirit runs through it, and when we formed the union we knew immediately we had to take his name. And, of course, Glenbuck holds a special place in our hearts.

"One Liverpool fan Jimmy Flowers, who unfortunately couldn't make it today, organised the original memorial and a trip here back in 1997 and it's brilliant to be back now and see what has been done. SOS are both humbled and proud to be part of these celebrations.”

Fellow SOS member Peter Hooton added: "To come and see the spiritual home where Bill Shankly came from, his humble background, a mining village where nothing has existed for years but which has now been restored into a heritage centre is absolutely fantastic especially for the great man's legacy.

"I still think he's relevant today in 2019, his attitude, his principles, his belief in the values of hard work and that is being carried on today with Klopp's philosophy.

"I think they're very very similar in that respect, they both come from small villages/areas - Klopp from the Black Forest, Shankly from Glenbuck - but they clearly hold the same principles and attitude of 'if you work hard for the team you can achieve anything' and I think Shankly proved that and Klopp is proving it in the modern era."

As well as its footballing heritage, Glenbuck is also a site of global geological significance due to its unprecedented topographical features and its redevelopment is part of an overall restoration of opencast sites across the East Ayrshire region.

Professor Russel Griggs, chair of the Scottish Mines Restoration Trust, explained: "We came here six years ago when this was one of a whole host of open cast sites which had become derelict. All you see around you was a sea of blackness but I hope what we've managed to put back today a bit of the joy and a bit of the magic of what this village was.

"Glenbuck for a whole host of reasons is a place of significance for Scotland. It was one of the traditional mining villages where miners used to go down the pits, play football and go for a pint. That was their life and so for Glenbuck to now be restored, not just to honour the memory of Bill Shankly, but for the whole community spirit of the village to be maintained and celebrated is something I think he would want too.

"It's a great achievement and shows what can happen when a bunch of people get together for an aim that seems impossible at the beginning, I'm sure Bill Shankly took over a Liverpool team that was way down the division he had that aim and vision as well so it again shows the power of teamwork.

Among the future plans for Glenbuck are hopes to reform the village's football team, the Cherrypickers, with campaigners from This Is Glenbuck hoping to protect the village football heritage and make land adjacent where they used to play, Burnside Park, usable once again for the beautiful game.

Michele Palilla and Ben Browning from This Is Glenbuck said: "It's been a phenomenal effort from an awful lot of people, to take a place that was derelict and had nothing here to bring it back to life. It's been years in the making and today finally it's all paid off.

"This is a celebration, not just of Bill Shankly and his achievements, but also the many men from the Glenbuck Cherrypickers who went on to become professional footballers.

"For such a small place to produce so many is an amazing achievement and a big goal for us is to turn Burnside Park back into a place where football can be played again and we hope to be able to reform the Glenbuck Cherrypickers as an amateur team to keep alive the memory of the football team and the village itself. This is our aim and hopefully in a few years time we will achieve it."

Sam Purdie was one of the instigators of the campaign to breathe new life into Glenbuck when it began nearly two decades ago and he paid tribute to the many people whose hard work had made that dream a reality.

He said: "This is a dream come true for us and is beyond our wildest dreams. It's a campaign we started 17 years ago and now we're here at last with a tribute that's worthy of a football legend.

"It began with the catastrophe of the open cast mining companies leaving us a black 'moonscape' here. Since then we've been trying to convince people that a village called Glenbuck really existed. Eventually we've succeeded in and can now say 'This is Glenbuck, this is who we were, and we're back.

"This was a community of people, folk have been living in this valley since the Bronze Age, so this has been a place that persevered until modernisation caught up with us and eradicated us from the face of the earth.

"But now we're back and people who love Glenbuck and who love the Shankly legend have something to come and see which is worthwhile."