They had snatched the title away from Liverpool and Manchester City celebrated by singing a Beatles classic. Hey Jude was belted out from the Amex Stadium's South Stand as the away fans roared their adopted anthem at the end of an epic Premier League title race. 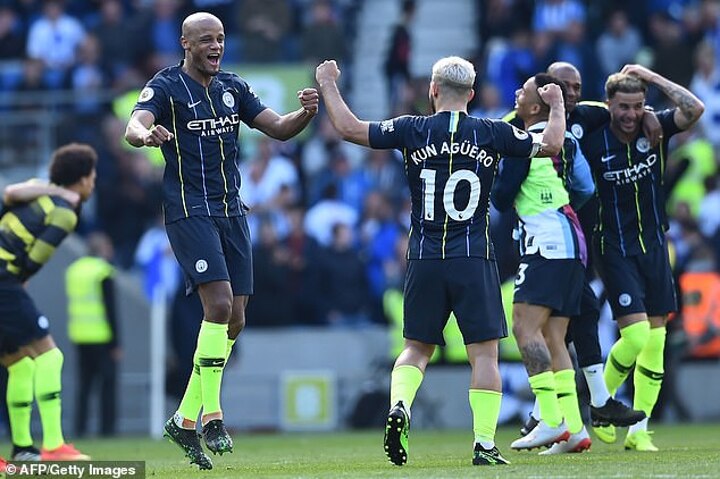 What a contest it has been. What a performance from the two main protagonists. And what a way for City to win it on the final day.

The lead had changed hands a record 32 times over the course of an enthralling title race. Neither club had lost a league game since January but, ultimately, City's 14th straight win in the run-in - eclipsing a mark set by the Arsenal team of 2001-02 - was just enough to see them over the line.

In being crowned champions for the fourth time in eight years, Guardiola's side also became the first club to retain it since Manchester United a decade ago and stayed on course for a domestic Treble. 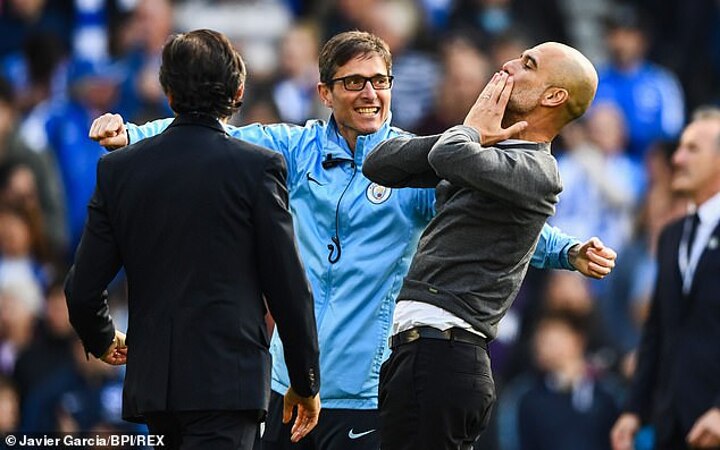 The march to the title has been truly magnificent, arguably even more so than last season when it was all but tied up by the turn of the year.

It has not been without its blips and none more so than in the first half here. There was a party mood about the place to end the season and see off retiring captain Bruno.

Before kick-off, the match-day announcer interviewed fans wearing plastic seagulls on their heads and they sang their anthem Sussex by the Sea with even more gusto than usual.

But any thoughts that Brighton were going to let City saunter to the title were quickly dismissed even though they were under the cosh for much of the first half and put nine men behind the ball. 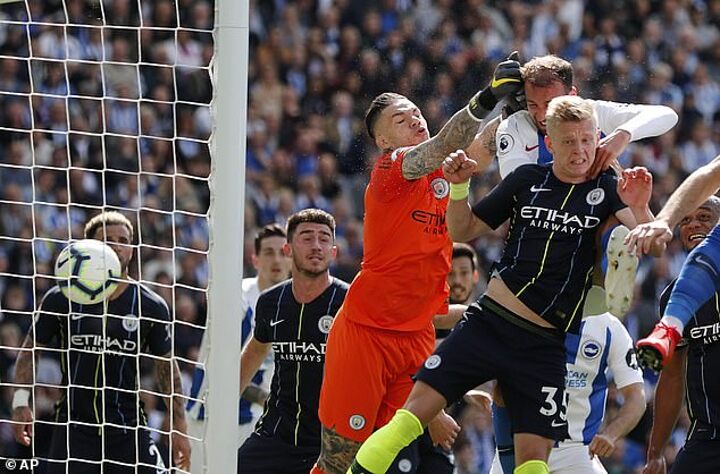 In Anthony Knockaert, Brighton - and Liverpool - had a man who was clearly fired up to make his mark on the big day. It was his fantastic throughball in the 10th minute that gave Alireza Jahanbakhsh an opportunity to fire inches wide of Ederson's goal.

The Brighton fans groaned as if it were their title hopes on the line, and were happy to voice their delight 10 minutes later when news filtered through that Sadio Mane had put Liverpool ahead against Wolves at Anfield. 'One nil to the Liverpool,' they taunted the City supporters who fell silent.

Glenn Murray, too, seemed determined to make life as difficult as possible for the league leaders, and it was the big striker who gave Chris Hughton's side a shock lead on the 26th minute. It was one more goal than Brighton had managed when losing rather timidly to City in the FA Cup semi-final at Wembley last month. No-one could fault their effort here.

Ederson's failure to prevent a corner brought another roar from the home fans. Guardiola reached for a water bottle by the tunnel. He spat out the first mouthful and swallowed the second as Pascal Gross wound himself up to whip in a set-piece from the left. 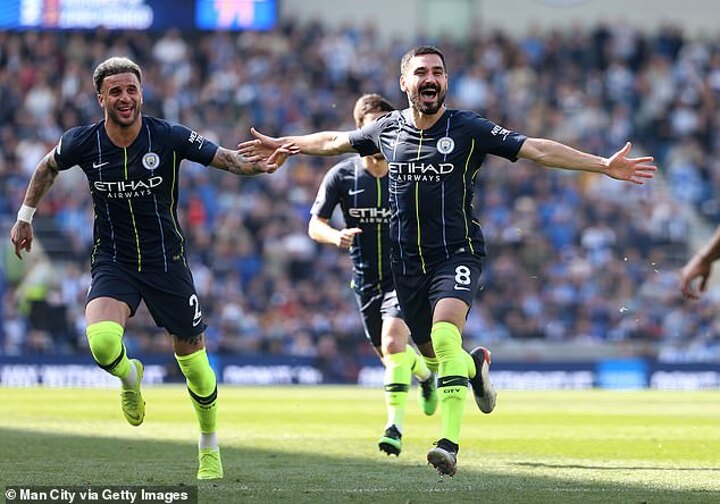 It was delivered to the near post where Murray rose to power in a header. Cue another huge roar from the Brighton faithful bettered only, one would imagine, by the response at Anfield.

Guardiola took off that familiar hooded cardigan of his and threw it the floor as though City meant business now. Time to fight. His team responded likewise and were level immediately.

Raheem Sterling attacked with renewed purpose on the edge of the area and slipped the ball to Sergio Aguero, always the man for the big occasion, who swept home. Just 83 seconds separated the two goals.

Nerves were settled before they even had time to afflict Guardiola's players and a second goal followed seven minutes before the interval when Aymeric Laporte lost Murray and surged to the edge of the six-yard box to meet Riyad Mahrez's header with an emphatic downward header. 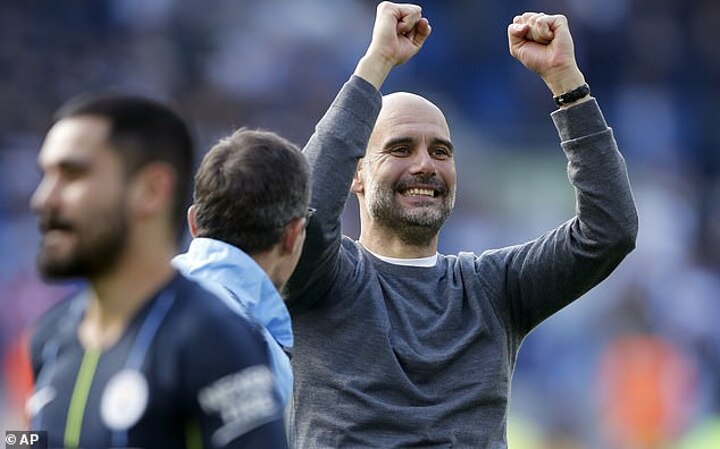 Guardiola pumped his fists on the touchline to celebrate a crucial, possibly decisive, goal in this titanic race.

To watch him for the next 25 minutes of the match, you wouldn't have thought the City boss thought it was a done deal, though. Guardiola looked increasingly tense after the break, crouching on the turf like a caged animal.

The relief practically exploded out of him when Mahrez fired City's third in the 63rd minute. While the rest of the City bench erupted and the substitutes who had been warming up raced down the touchline to join in the celebrations, Guardiola squeezed his eyes shut and let it all out. The end was nearly on sight.

Ilkay Gundogan's fourth brought a more reserved hug with his No 2 Mikel Arteta and now it was a procession. Carnival time.

The final whistle brought more celebrations, more songs and that passionate rendition of Hey Jude, a song about making things better when you're feeling pain. The Liverpool fans probably won't appreciate that at the moment.