The football restart has not halted Manchester United's momentum as they continue on their upward trajectory. 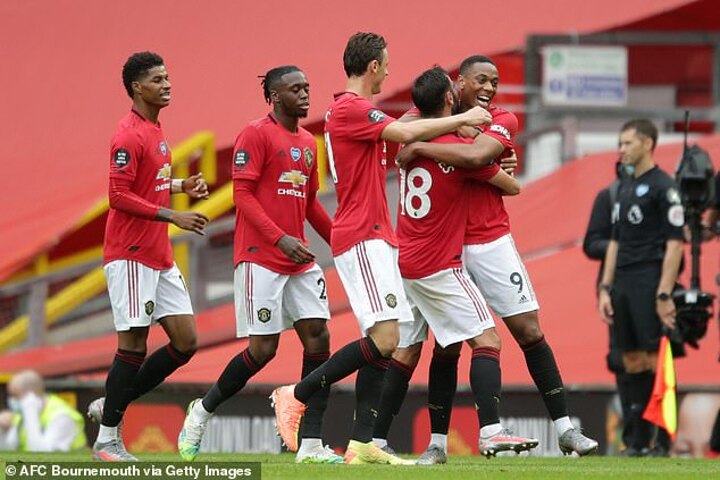 The Red Devils have won five of their six matches in all competitions since football returned in June, drawing at Tottenham, and are now 17 games unbeaten in total.

United remain in the hunt for the top four, while they can also win the FA Cup and Europa League this season too. With just a maximum of 10 games left remaining in all competitions, what can manager Ole Gunnar Solskjaer learn from and take going forward into the next campaign?

Paul Pogba and Bruno Ferndandes can play together

It's a small sample size but this question has been answered emphatically so far. In the four games they've started together United have scored 14 goals and conceded just two. Fernandes has scored four of those goals, while assisting three with Pogba producing a goal and an assist too. Pogba assisted Fernandes in the 3-0 win at Brighton, while Fernandes returned the favour at the 3-0 victory at Aston Villa.

The chemistry on the pitch between the two is clear. Fernandes has predominately taken the spotlight but that has allowed Pogba to quietly go about his business and to great effect. In the two games he didn't start, the 27-year-old came on and helped change the game. The first was in the 1-1 Premier League draw at Tottenham, with United trailing 1-0, and the second was in the FA Cup quarter-final at Norwich - with the scoreline tied at 1-1.

As revealed exclusively by Sportsmail, Pogba is now considering opening contract talks with United having been encouraged by Fernandes' impact at Old Trafford especially. If Solskjaer can keep the Frenchman then he has makings of a fantastic midfield with Pogba alongside Portuguese playmaker Fernandes.

United are no longer one-dimensional

A knock-on effect of having Pogba and Fernandes in his team, means Solskjaer now has more strings to his bow tactically. In the big games this season, the Norwegian has shown his nous by switching it up between either deploying a back five or a four in those matches.

Playing a brand of counter-attacking football has worked successfully in those games - producing home and away wins against Manchester City and Chelsea for example. Overall in matches against Arsenal, Chelsea, Liverpool, City and Tottenham, the 47-year-old has collected 18 points from a possible 30.

However, the club's issues tended to arise when they faced teams who wish to sit in deep defensive blocks. January's woeful 2-0 home defeat by Burnley was a microcosm of that, while the tepid 0-0 draw with Wolves in February was another example of their inability to break down a resolute defence.

But as the team continue to build, they are becoming a more possession-based side. Their retention of the ball, allied with Pogba and Fernandes' integrations, has enabled them to break down oppositions better. And they still carry the threat of being devastating on the counter-attack - as evidenced by Fernandes' second goal in the 3-0 win at Brighton.

But there are still worries defensively...

The Red Devils may have conceded just three goals since the season's restart but Solskjaer would have been fuming at the manner of two of those.

The first against Tottenham saw Steven Bergwijn be given the freedom of the United half to score. First Luke Shaw's poor header gave him possession before he waltzed past Harry Maguire like he wasn't there. To compound matters his hard shot was straight at David de Gea but somehow went in. Legendary United captain Roy Keane went berserk at the defending - and was particularly damning of De Gea and Maguire.

Then in the 5-2 win at home to Bournemouth, the pair were at fault for them going 1-0 behind. Maguire sold himself too easily as Junior Stanislas nutmegged him inside the penalty area before scoring past De Gea at his near post. This time it was club legend Rio Ferdinand who criticised them.

Solskjaer has tended to play Maguire and Victor Lindelof as his first-choice central-defensive pairing this season but there appears to be room for manoeuvre here. Ferdinand believes the club need a more mobile centre back alongside captain Maguire if they are to truly challenge next season.

Napoli's £89million-rated centre back Kalidou Koulibaly has been linked with a move to Old Trafford for a couple of years now. However, United do have Eric Bailly within their ranks, although he is injury-prone, while they remain hopeful Axel Tuanzebe can solve their issues too. Again though, he has an injury-ravaged season.

De Gea or Dean Henderson? That's the dilemma Solskjaer and his coaching staff are going to face going into next season. Who will be their No 1 goalkeeper?

The former is a Manchester United stalwart who will make his 400th appearance for the club on Monday night if selected for the Premier League encounter against Southampton. Meanwhile, the latter will be returning to the club this summer after excelling with Sheffield United - who remain on course to qualify for European football next season off the back of their first campaign back in the Premier League.

De Gea has been at Old Trafford since 2011 and has remained the undisputed No 1. However, since returning from the 2018 World Cup with Spain his form has been patchy with his standards slipping below his supreme best. Those errors against Tottenham and Bournemouth are just the latest and there have been some external noises for him to be replaced by Henderson.

At 23, he is six years De Gea's junior, and has proven his credentials as a top Premier League goalkeeper this season with Sheffield United. He has kept 13 clean sheets for the Blades - only one less then Nick Pope (Burnley) and Ederson (Manchester City) in the race for the Golden Glove. The Englishman's form has led to calls for him to earn international recognition too.

Speaking ahead of their match with Southampton, Solskjaer was effusive in his praise for De Gea.

'He's been fantastic, David, and since I've been here I've enjoyed working with him. It did not cross my mind one second [to drop him at times this season]. Not at all! To be a Man United goalkeeper you have to have a strong mentality. David has a strong mentality and he's been here for so long.

'You do that by walking out onto that pitch again, showing your quality and mentality, and he's a strong, strong character. I didn't see any good in taking him out at all.'

Ask the majority of Manchester United supporters and the player they would like to sign the most this summer is £100m-rated Jadon Sancho. The Borussia Dortmund winger is continuously linked with a move to the Theatre of Dreams and his arrival would certainly help propel the club towards becoming true title contenders.

The Red Devils attacking triumvirate of Anthony Martial, Marcus Rashford and Mason Greenwood are excelling right now and have played a major role in the club's upward trajectory.

However, the very best teams have options in abundance across the pitch and this luxury is something Solskjaer does not yet possess. The threadbare attacking options were highlighted at the beginning of the year with the deadline-day buy of Odion Ighalo. The Nigerian has become a cult figure at his boyhood club and has provided much needed depth as a central striker.

However, United have yearned for a right winger in years and Sancho fits this bill. His skill, poise, end product and overall X-factor that would provide another weapon in United's armoury and his numbers this season testify to that. In 32 Bundesliga games for Dortmund he scored an incredible 17 goals alongside 16 assists as they finished second. This output made him Dortmund's top goalscorer and assist-maker in the league.

Also his possible arrival would allow Solskjaer more fluidity in his striker options. Competition would be fiercer with the likes of Greenwood, Martial and Rashford fighting it out. This would mean heightened performances which can only be beneficial to the club. Football is more and more a squad game and Solskjaer wouldn't want a repeat of his injury crisis that hit in January. Another addition would allow him more flexibility.

The kids are coming through

The Red Devils are famed for their academy - with the 'Busby Babes' and the 'Class of 92' prime examples. Through Solskjaer those traditions are being reinstalled with the manager not afraid not to trust in the club's youth.

Greenwood and Brandon Williams have made vital contributions this season - with the former currently leading the plaudits. In his first-full season of professional football, the 18-year-old has 16 goals in all competitions. Nine of those have come in the Premier League with four in his last three games - all of them brilliant takes. Solskjaer has hailed him as the best finisher at the club. Greenwood's form has led to calls for him to be part of Gareth Southgate's England squad moving forward - such is his rise.

Williams has had a stellar breakthrough year and is pushing Luke Shaw all the way for a place in the team at left back. The 19-year-old is tenacious in the tackle, quick, reads the game well and has shown maturity beyond his years in defence. He's been trusted in the big games this season and has endeared himself to supporters as a result.

These two have been big pluses for Solskjaer who will hope Tahith Chong can follow in their footsteps - having already lost Angel Gomes at the end of lost month when his contract expired. Meanwhile, Tuanzebe will play a bigger role next season with the future of Henderson to be sorted out too as he vies with De Gea for the No 1 spot.

James Garner and Ethan Laird appear to be the next academy starlets rising up the United ranks. Garner, 19, is a central midfielder who has been dubbed as the 'next Michael Carrick' by Solskjaer. Laird, 18, is a highly-rated right back and is another young talent the club have in this position alongside Aaron Wan-Bissaka and Diogo Dalot.