Top flight managers are calling each other to share ideas on how to stop Erling Haaland, but whatever they have tried so far, it isn't working. 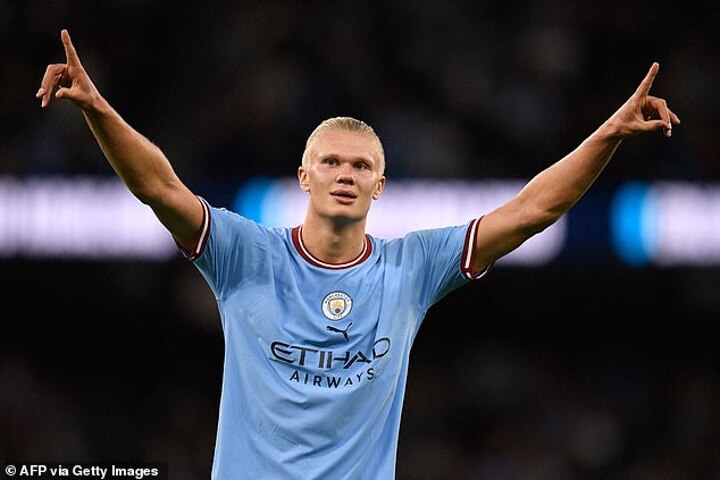 Haaland has raced to nine goals and bagged two hat-tricks in five games for Manchester City, smashing Premier League records along the way. On average, he scores a goal with every eleventh touch of the ball.

In his latest outing, he cut Nottingham Forest, his father Alfie's former club, down to size with a first half hat trick, sparking a 6-0 rout.

The problems posed by Haaland, City's £51M summer signing are already clear: Play high and he runs in behind; block low and you risk letting the Norwegian giant into the penalty area, which is the predator's favourite feeding ground.

The analysts at Aston Villa, who play City on Saturday, Tottenham Hotspur and Wolverhampton Wanderers, the following Premier League opponents, must be working overtime; all leave cancelled.

And they will find little encouragement at the clubs already humbled by Haaland.

'Outstanding,' was West Ham boss David Moyes conclusion after the striker scored a brace at the London Stadium in a 2-0 City win. 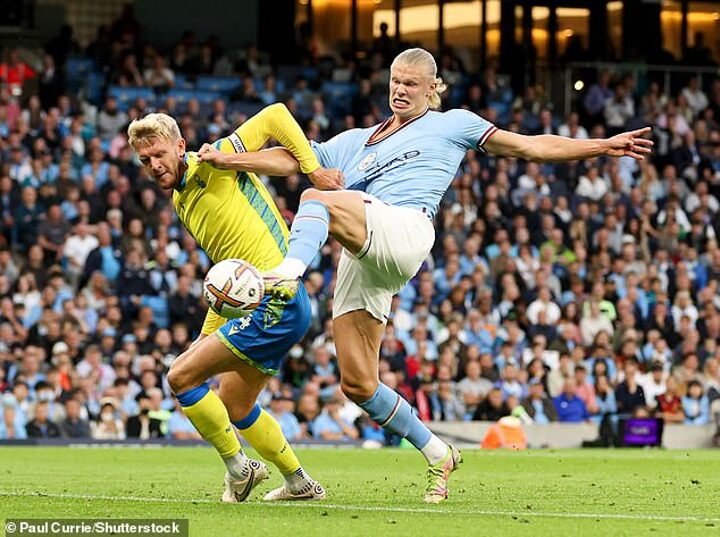 'I think he is very different [to anyone else we have seen before],' reflected Newcastle manager Eddie Howe, after Haaland had scored to spark a comeback to rescue a 3-3 draw at St James' Park.

Crystal Palace coach Patrick Viera believes the devastating impact of the former Borussia Dortmund forward is a combination of his own quality and the level of the players around him.

'This Manchester City team always allows those players to shine,' he said after Haaland's first hat trick overturned Palace's two-goal lead and in a 4-2 win for the home side at the Etihad. 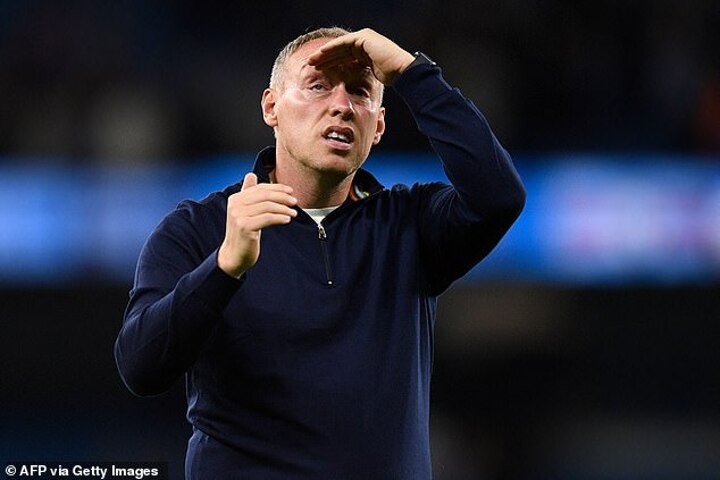 And poor Steve Cooper. The Forest boss had to revert to damage limitation at half-time and looked shell shocked in the immediate aftermath of his chastening defeat.

So, how do you stop Haaland? Sportsmail challenged the analysts at Analytics FC, who advise a host Premier League and Championship clubs, to come up with five ways to tame the Premier League's top scorer.

Keep him out of his 'hot zone'

Erling Haaland is lethal in the penalty area. Last season, he scored 95 per cent of his goals inside the box from an average range of just over 12 yards.

Haaland's shot map from his appearances for Borussia Dortmund in the Bundesliga, shows a 'hot zone' a little wider than the six-yard area from where he routinely scores.

Defenders have to do all they can to deny Haaland this space, urge the analysts at Analytics FC, which means forcing him wider, or denying him entry to the penalty area altogether and avoiding set pieces around the box, which will allow quality delivery into the most dangerous area. 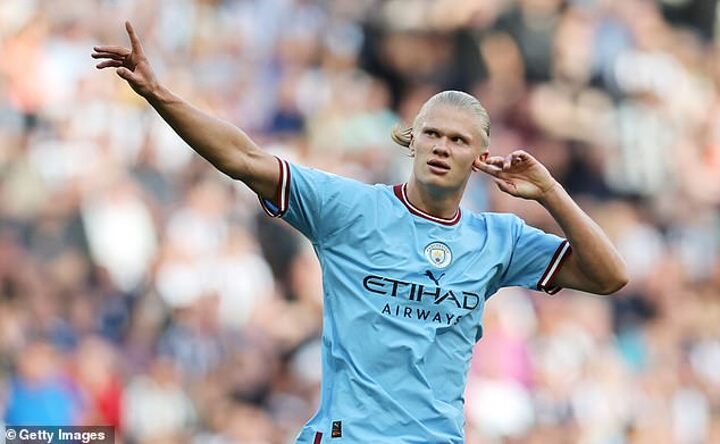 Even Pep Guardiola agrees. He addressed Haaland's threat when City met his former club, Borussia Dortmund, in the quarter final of the Champions League in 2021.

'The strikers who score goals are going to score more goals when they are in our box. When they have more minutes as far as away from our box, they have fewer chances,' Guardiola remarked, before a 4-2 aggregate win. 'So the best way is avoid them being there as much as possible.'

The striker's speed - clocked at 35.94km/h which puts him in or around the top 10 fastest players in the Premier League – means defenders will not get a second chance if he gives them the slip.

In open play, keeping the spaces between the central defenders is important to deter Haaland's darts in behind, or to shepherd him away from goal. 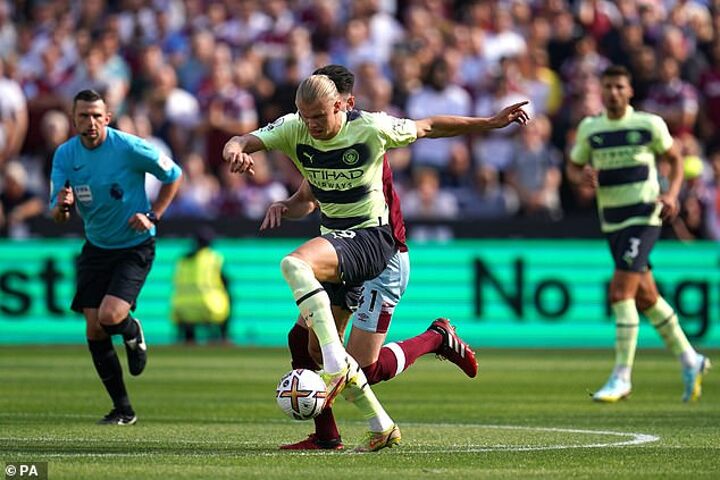 At West Ham, the Norwegian exploited the gap between the centre-backs to run into the box and earn a penalty, which he converted.

And if Haaland breaks the line and gathers possession in his favourite space, to the left side of the goal (as he looks at it), deny him his preferred shot, say the number crunchers.

From this position, he is most likely to aim for the bottom right-hand corner. He often misses when he goes high in these moments.

'Defenders and keepers should be aware that this is how he shoots in that position and know it'll go low,' say the analysts at Analytics FC. 'It might allow them to block or save if they can anticipate the shot.'

But of course, there is no guarantee. Against Palace, Haaland split the opposition's centre backs, ran on to Ilkay Gundogan's through ball… and went high left to seal the game 2-0.

Haaland's dreams must include City's superstars threading through balls into the inside left channel; those passes are his meat and drink.

He has already demonstrated his appetite to break the lines and scored and earned a penalty this way in the Premier League.

In the Bundesliga, during the past two seasons, it was the passes into the left side of the penalty area (from the attacker's point of view), which led to the most goals. The graphic shows how Haaland angles in on goal from these spaces. 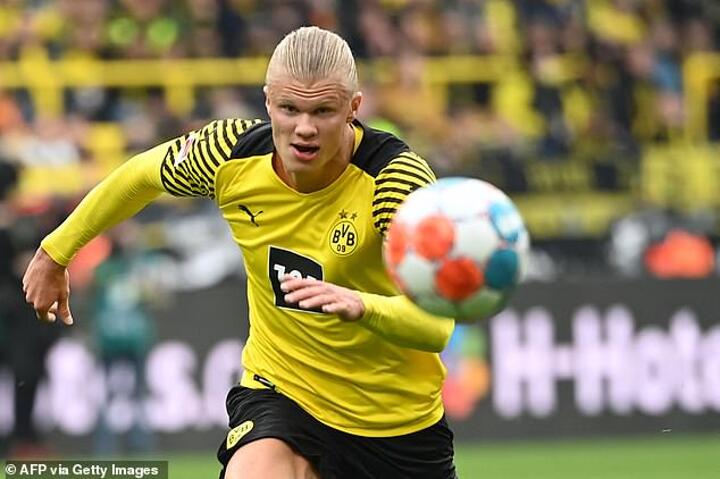 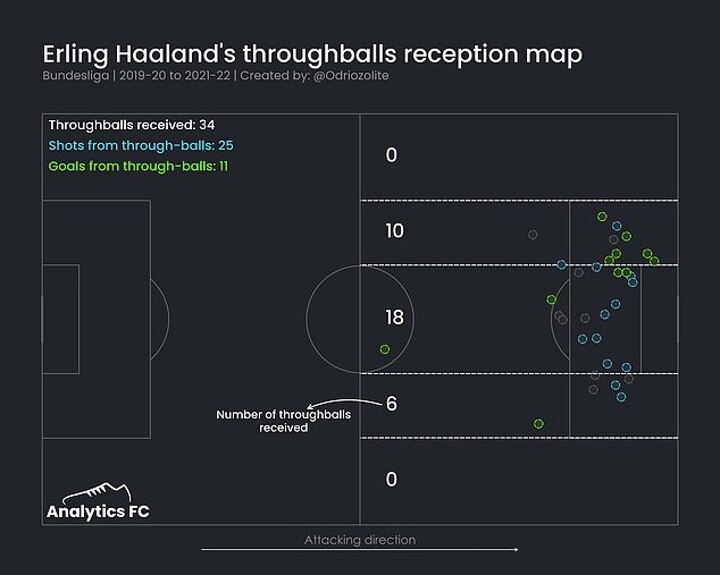 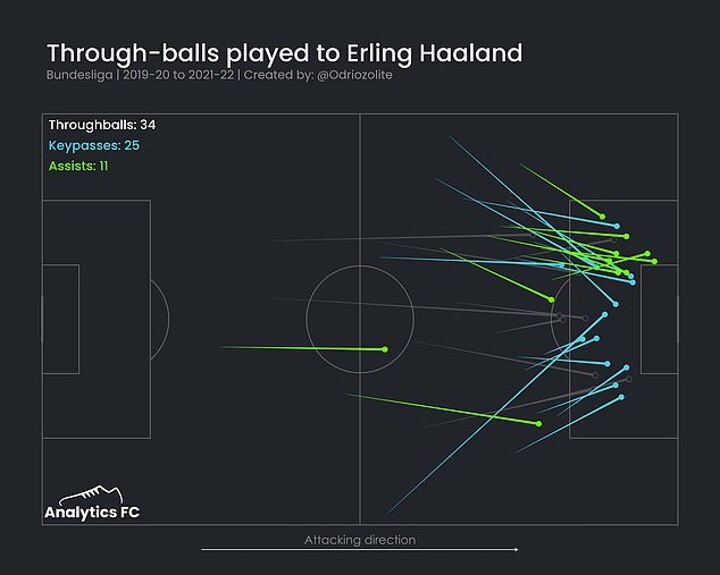 'Haaland is lethal from the left half space, but running onto to through balls on the right did not yield a single goal,' say the analysts.

The striker's goals from the right side of the penalty area came from crosses, cut backs and loose balls.

The conclusion is to deny City's midfield the opportunity to play the through ball into the left channel and for defenders to do all they can to stop Haaland making that run.

Of course, the nature of a top player is he adapts and Haaland has already scored from a through-ball down the right against West Ham, although the Hammers defenders were caught hopelessly flat-footed and David Moyes felt his players should have cut out the pass.

But the point here is that in order to reduce the chances of Haaland scoring, the analysts insist teams should force him and City into areas where he is less successful.

'Haaland is left-foot dominant, and he would want to cut infield onto his left from a through ball on the right, but he often tries a snap-shot with his right instead which is less effective, or he hits it too centrally or misjudges the bend and fires wide past the left post (as he is looking at it),' they told Sportsmail.

'Basically, he's just not as good cutting as he is firing low and hard from the left into the right corner.'

This will sound surprising… but in open play Forest's back three did OK containing Haaland in the first half at the Etihad on Wednesday.

They stayed narrow, often on the line of their penalty area or a little further forward, refusing to give the Norwegian the chance to nip behind them.

When Joe Worrall, the right-sided centre back was pulled out of position, Scott McKenna the left-sided defender came in to double up with Cheikhou Kouyate, the most central of the three, and vice-versa.

So far, so good. But Forest came unstuck at set pieces. They set up with Worrall plus a second defender tight to Haaland. However, after the first phase, the second defender followed the ball and in the critical moments the striker stole a yard on Worrall and used his strength to hold off the recovering defender to score.

'Too often, defenders leave him to try to occupy spaces to block passes, and this means he can use his exceptional movement and explosive pace and physicality to get sufficient space to shoot,' Analytics FC told Sportsmail.

'Defending tight, just as Joachim Andersen did to Darwin Nunez for Palace against Liverpool, makes it hard for Haaland to get that small amount of space needed to leverage his physical abilities. 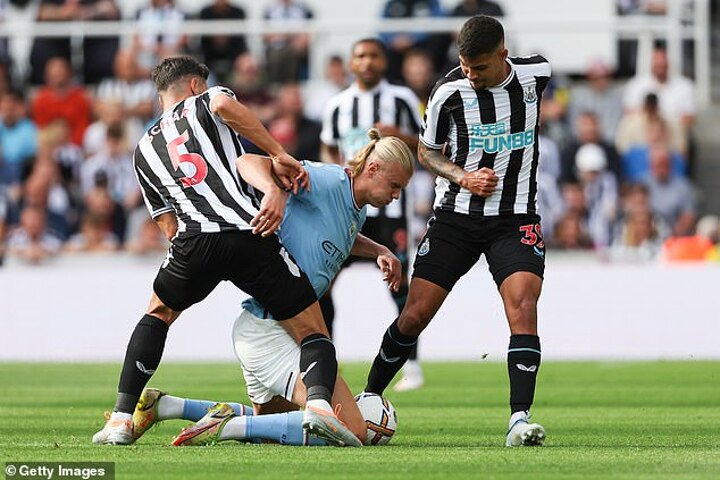 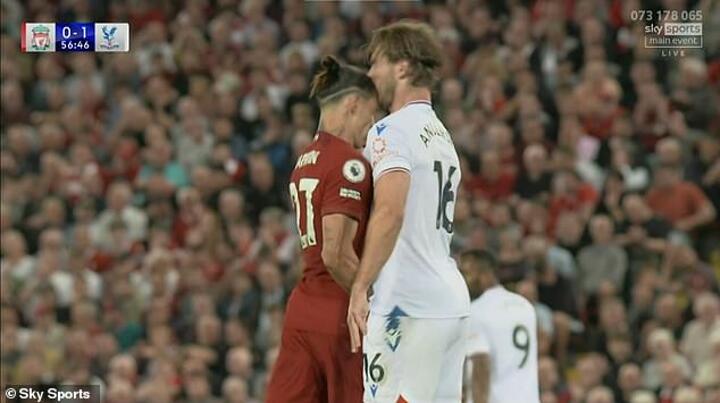 'Obviously, this requires a physically-imposing defender, as in tight spaces Haaland's strength comes into it, but he wants room to dart and pull away from defenders. Deny him this, especially if forcing him wide, and defenders might have some joy.'

Against Forest, the first goal came from a short corner, with the second ball whipped into the near post and the third strike was in the third phase of an attack after the Reds failed to clear the ball.

Similarly, Haaland punished Palace and Newcastle after an initial effort from City was cleared and defenders moved towards the ball, while Haaland pulled away from it into a pocket of space.

'Stay with him,' caution the analysts.

OK, easier said than done, but not impossible.

As we speak, analysts are reaching into the archive for the footage from Leeds United's 1-1 draw with City at Elland Road in October 2020, Spurs 3-2 win at the Etihad in February and Newcastle's first half performance against the Blues last month.

In all three matches, City's opponents put enough pressure on the ball to disrupt the rhythm to great effect. It was struggle to maintain it for the full game, but they did enough to earn points. Spurs set up in a 3-4-2-1 formation, which allowed them to present a low block while blitzing City's midfield. Harry Kane's brilliance at dropping deep and holding the ball provided an outlet and the platform for devastating counters, which eventually won them the game.

This is the holy grail. A defensive line that is not so high that Haaland can hurt defenders by running in behind, but not so low that City can exploit the half spaces down the sides of the penalty area and cut the ball back. 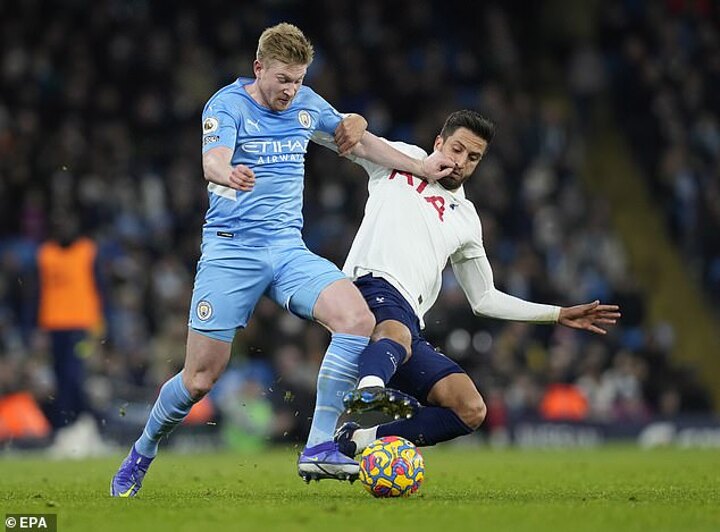 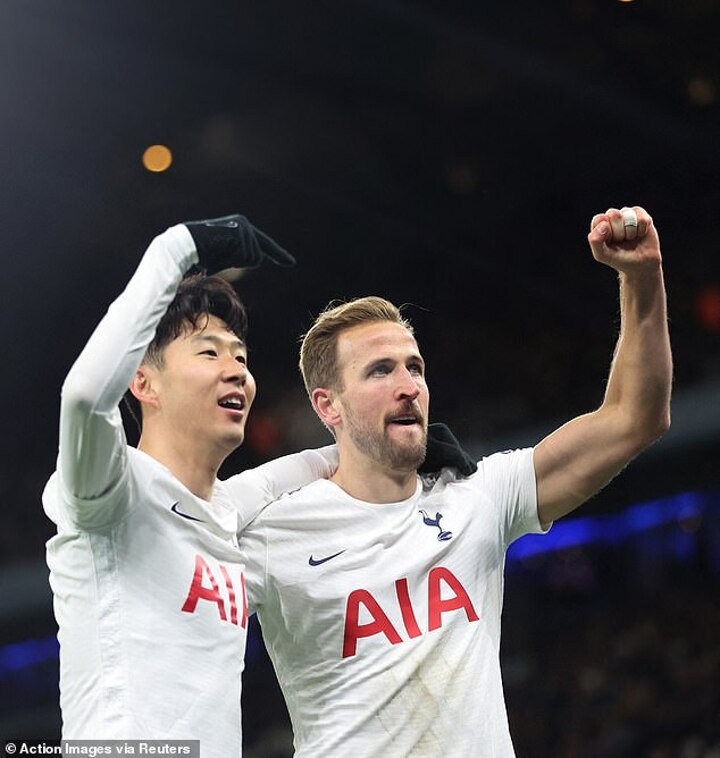 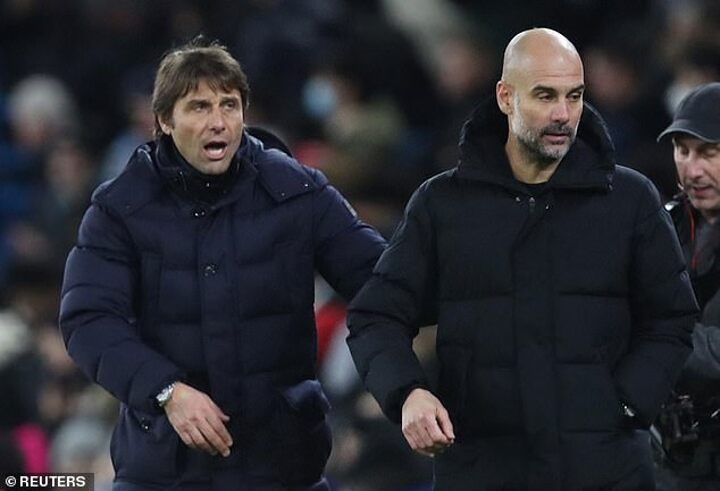 It means stepping onto Gundogan and Kevin de Bruyne and putting Rodri under as much pressure as possible at the base of the midfield.

The hope is that City and Haaland are not allowed to play to their strengths, so balls are clipped over the top and the striker can be pushed wide into the corners, or even better made to compete in the air, where the defenders have an advantage.

With no way through, City's opponents will hope Haaland starts to come short, away from the goal, where the defenders are under less scrutiny and can force an error or commit a foul.

The challenge, of course, is the quality City have all over the pitch, which makes it hard to press individuals'– there is always an outlet - and the relentless nature of Haaland.

The striker is always on the move, for the first, second and third phase of attacks. He is happy to not touch the ball for long periods, but when he does, he makes it count.

And pack a punch!

Once John Stones starts spending more time as part of City's attacks than in their defence, opponents know they are in trouble.

Teams can only hold out for so long when they are playing some of the best players in the world, under the guidance of the finest coach.

No team in Europe makes more crosses and cut backs from the dangerous half spaces along the sides of the penalty area than City. These are tailor made for Haaland. 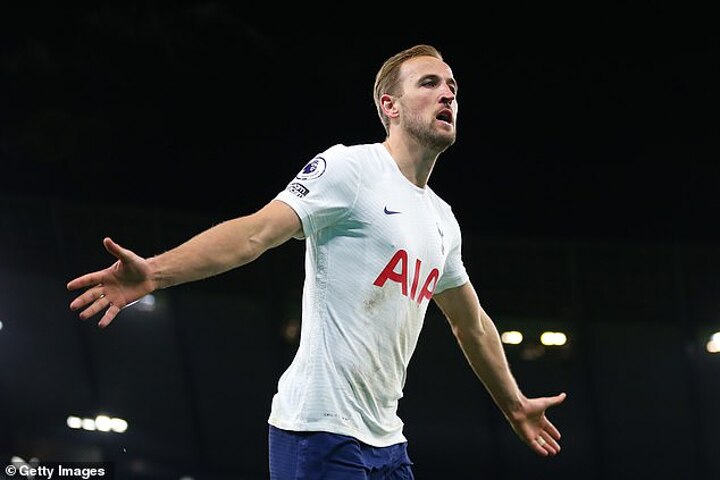 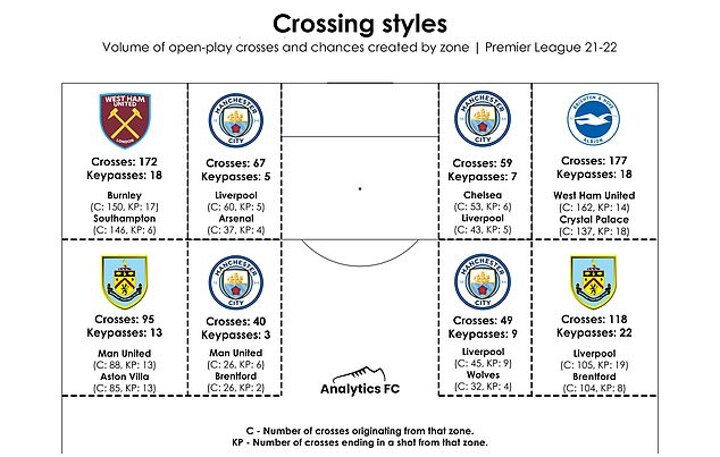 Defenders have to double up in these areas and centre backs must cover the near post to stop the cross, with colleagues piling in behind to plug the gaps. All of that takes cohesion and concentration at an extraordinary level.

City are relentless at working these areas looking for an opening. Sooner or later a cross will get through and you-know-who will be waiting.

The only way to force back the blue tide is to attack City at every opportunity and teams have proved the champions can be vulnerable in their transition from attack to defence.

This season, Newcastle and Crystal Palace have already scored on the counter attack, Spurs were brilliant at the Etihad last season and Leicester City and Southampton have also had success in the past.

Well planned raids force Haaland away from the goal and relieve the mental pressure for a few moments, allowing defenders to reorganise. Opponents must carry a threat, Resistance alone is futile.