Barcelona were surprisingly comfortable in securing their 2-0 win over Sevilla at the Estadio Ramon Sanchez Pizjuan on Saturday. 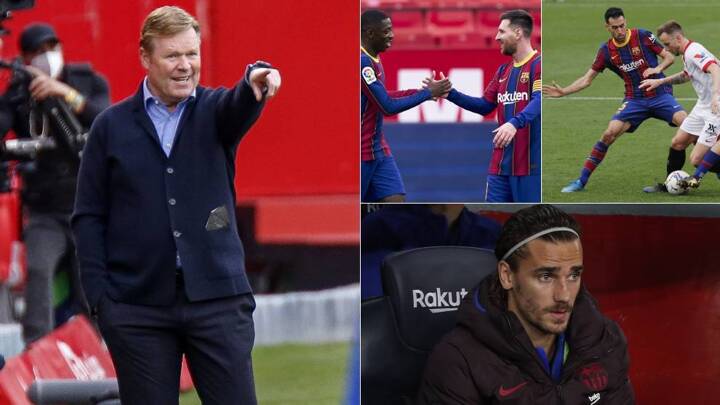 The visitors' control over the match was largely down to Ronald Koeman's tactics, which were executed to a tee by his players.

The Dutchman made the intriguing switch to a system with three centre-backs, which morphed into 3-5-2 with the ball and 5-3-2 without it.

Barcelona had only used this system twice before this season, including in an impressive 3-0 win over Real Valladolid.

There are a number of advantages and disadvantages that come with this formation.

When Barcelona were out of possession against Sevilla, Jordi Alba often tucked in as a left-back and Oscar Mingueza as a centre-back.

Meanwhile, Sergino Dest moved inside as another body in midfield alongside either Frenkie de Jong or Pedri, creating a rigid 4-4-2 system.

The changes unsettled Julen Lopetegui's side, who were unable to find a way past the solid blockade.

In Koeman's 3-5-2 formation, Sergio Busquets runs less and gets involved more often. This is because he's not having to the gaps his teammates leave.

For an ageing midfielder, the sort of protection that a back three provides has a major impact on their performance.

With their defensive duties reduced by having more centre-backs on the pitch, the likes of Lionel Messi and Ousmane Dembele are free to roam forward.

Both attackers did this to great effect against Sevilla, scoring the goals that led to the victory. The change in formation was notable in Dembele's display especially.

The system also benefitted Dest, whose defensive frailties were exposed by Kylian Mbappe in the Champions League.

Koeman's tactics left no room for Antoine Griezmann in the starting 11 or among those who came off the bench in Nervion.

The Frenchman remained a substitute for the full 90 minutes as Koeman preferred to have a quicker forward like Dembele up top.