Erling Haaland's father Alf-Inge Haaland spent 10 years of his career in the Premier League, before a knee injury forced him to retire early while he was a Manchester City player. 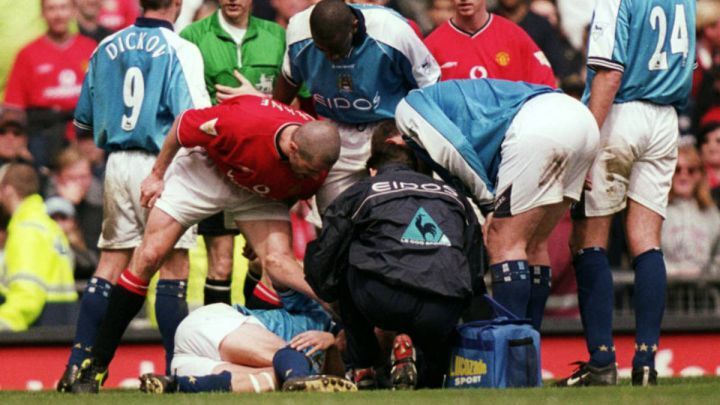 Alf-Inge Haaland, the father and agent of current footballing sensation Erling Haaland, is probably best known as the player whose career came to an end after a crunching Roy Keane tackle in 2001, some 16 years before his son burst onto the scene with his incredible hat-trick in his Champions League debut for Red Bull Salzburg in September 2019 against Genk.

Unlike his goal-machine son, Alf-Inge played as a defender and midfielder, and managed just 23 goals over his 255-game career. He spent the bulk of his career in the Premier League (1993-2003), where he played for Nottingham Forest, Leeds United and Manchester City.

Haaland joined Forest from his local Norwegian club Bryne FK in 1993. After making his debut against Leicester, he went on to play a total of 75 games for Forest, scoring seven goals, before he signed for Leeds in 1997. Haaland played 74 games and netted eight goals during his career at Elland Road and was part of the Leeds squad that reached the UEFA Cup semi-finals during the 1999–2000 season. That summer, Haaland left Leeds to join Manchester City for a fee of £2.5 million.

Haaland was enjoying life as indispensable starter under coach Joe Royle and had started 33 of 34 Premier League games before that fateful day at Old Trafford on 4 April 2001. That 34th start against Manchester United would prove to be the penultimate of his City and Premier League career, in which Roy Keane was sent off for a crunching tackle on Haaland’s right knee.

Keane, who received a three-match ban and fine of £5,000 over the incident, revealed a year later in his autobiography that the foul was pre-meditated revenge for an incident in 1997, in which Haaland criticised him for feigning an injury after a collision between the two in a game between United and Leeds. Haaland was booked for the clash as Keane was stretchered off the field. It turned out the Republic of Ireland midfielder had injured his anterior cruciate ligament in the collision and would not play again for almost a year.

Keane did not end Haaland’s career

To this day, it is wrongly believed that Haaland’s career was brought to end by Keane. However it is not true. Haaland’s left knee had been bothering him for a few months before the Keane tackle on his right knee at Old Trafford and he managed to go on to finish the game, which ended 1-1. He even managed to start City’s next game against West Ham, but was left out of the squad for the final two games of the season against Ipswich and Chelsea and would never start another game for The Blues.

That summer, he underwent surgery on his left knee, but only managed a further four substitute appearances the following season, before he was finally forced to retire in July 2003 after failing to recover full fitness. When later asked about the impact of Keane’s challenge, he told the Daily Mail: "The knee still hurts, that isn’t going to go away. I have to accept that. Did that tackle end my career? Well, I never played a full game again, did I? It seems like a great coincidence, don’t you think?"

However, in an interview with BBC Radio 5 live in 2014, Haaland confirmed that he didn’t blame Keane for ending his career. “I don’t blame him for kicking me in other games or that particular game. What I was concerned and worried about is that he said, in his first book, that he wanted to take revenge. And I don’t think that’s part and parcel of football."

"I don’t blame him. I never actually said he finished my career. It was my last full game in England, so maybe he had something to do with it."

Haaland managed to come out of retirement for a brief spell after eight years later to play for Norwegian Third Division club Rosseland BK in 2011. He played nine games for Rosseland before retiring for good in 2012.