There are a total of nine periphery players who could see more game time over the six games in the run up to the Christmas break. 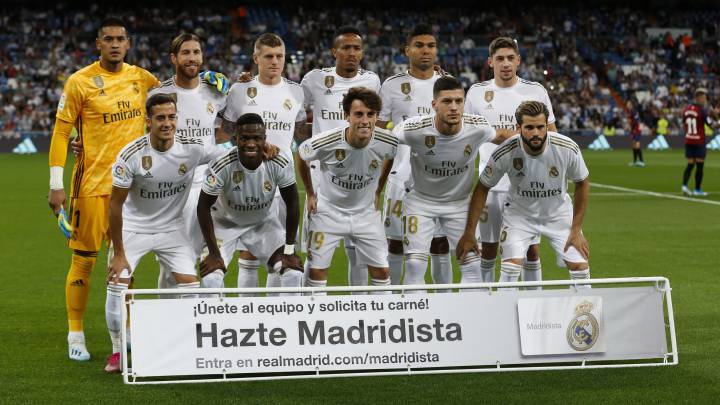 With the packed schedule of games ahead of Christmas and qualification for the last 16 of the Champions League already secured, some of Real Madrid’s periphery players are set for be given more opportunities over the coming weeks.

After Saturday’s visit to Alavés, Los Blancos will have a week off before they host Espanyol. Then it’s the inconsequential game against Club Brugge in the Champions League, before Zinedine Zidane’s side wave goodbye to 2019 with three clashes against Valencia, Barcelona and Athletic Bilbao.

Discounting Mariano, who has played zero minutes this season and has no place in Zidane’s plans, and the injured trio of Lucas Vázquez, James Rodriguez and Marco Asensio,, there are ten ‘Plan B’ players who could be see more game time before the Christmas break.

The Frenchman has competed on an equal footing with Marcelo over the course of the season, with Zidane alternating between them. But the latter was chosen for the crucial tie against the PSG, cementing his status as fist-choice left-back.

Real Madrid’s defeat at Mallorca marked a turning point for the young Brazilian. Before that game, which was his last start for Zidane, Vinicius played 39.8% of the total available minutes. After the visit to Son Moix, he has been left out of the squad on four out of seven occasions and played just 54 minutes (8.7% of the total).

It has been the reverse situation for Vinicius’ fellow young compatriot, who has seen his status grow exponentially since mid-October. With the loss of Bale in between the last two international breaks, Rodrygo opened debate on ownership of the right wing position.

Odriozola has not convinced Zidane, who, contrary to the situation at left back, is clear about his first choice ion the right with Carvajal. Odriozola, who had not made the squad since he received a red card against Mallorca, comes back into the fold for the trip to Alavés.

With Benzema as the undisputable starting centre forward, Jovic has started just three games this season. Overall he has featured in 11 and has one goal to his name.

The Malaga-born midfielder was Zidane's surprising starter against PSG. Before that game he had only had more minutes than Brahim Diaz and the still unused Mariano. Zidane has found it difficult to find a place for Isco in his regular 4-3-3 system, but the 4-4-2 used against PSG gave him more options.

He started two ‘Team B’ games against Osasuna and Mallorca and has been used for another 120 minutes out of necessity. He was handed 90 minutes against PSG due to Ramos’ absence through suspension and featured for a half an hour in the game prior against Levante to warm him up for the clash at Parc de Princes.

The French goalkeeper has played two and a half games this season. He started against the ‘Team B’ game against Osasuna before being handed the second half against Club Brugge to replace Courtois, who had to come off at half time because of a stomach bug. The Belgian’s absence for the following game against Granada gave Areola his opportunity for a second start, which has so far been his last.

A multipurpose defender, Nacho comes back into the group after an injury he suffered against Club Brugge on 1 October. He has played three games this season at left back.

The young Spaniard has come out the worst off as a result of the abundance of attacking players available to Zidane. He has only made the squad on two occasions this season for the trips to Mallorca and Eibar, playing just nine minutes in each game.