Manchester United supporters may have watched on with bated breath as Steven Bergwijn raced into the penalty area and smashed a shot towards goal, but surely would have expected David de Gea to stand equal to it. 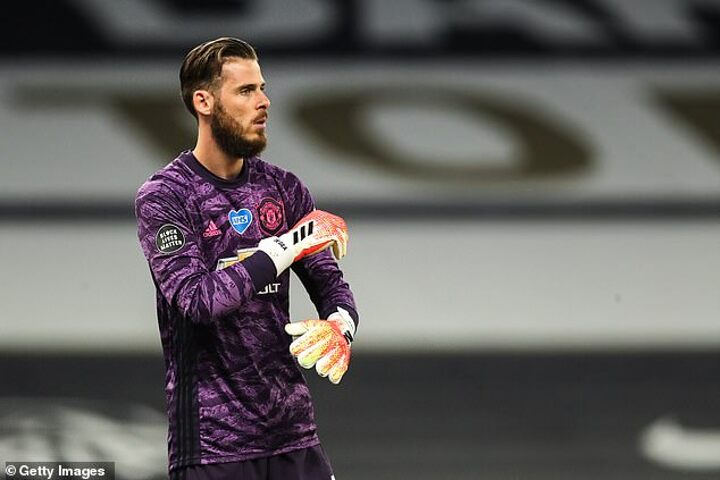 The strike was unleashed with plenty of power, admittedly, but the under-fire goalkeeper could only use his palms to deflect the ball into the top corner. As the Tottenham attacker wheeled away to celebrate, the United faithful were left with the all-too familiar sight of a shell-shocked and deflated De Gea.

Inside the Sky Sports studio, Roy Keane was rendered seemingly more red-faced than ever before. He declared he was 'sick to death' of De Gea and even claimed he would have been 'swinging punches' at the goalkeeper during the half-time break. 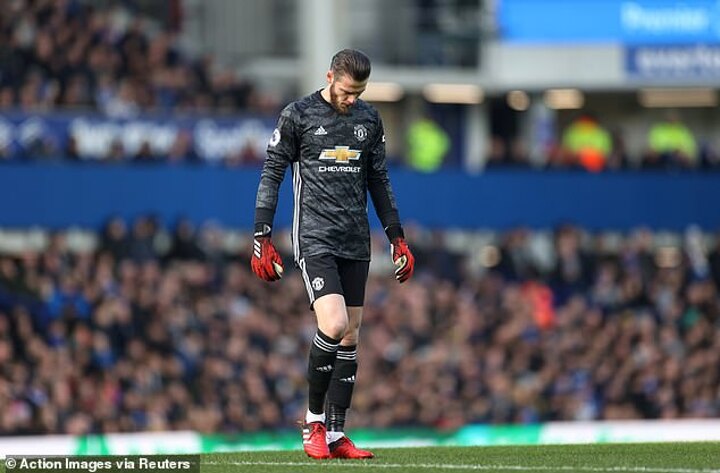 'David is the best goalkeeper in the world,' he said. 'He's conceded two goals in the last seven he's played for us – (including) Man City, Chelsea, Tottenham and Everton.

'The Everton goal is a freak one. This one (Tottenham) we can't say he can't save it, but he makes great saves and wins games for us. He's still the best goalkeeper in the world. David is working really hard, he isn't making errors you see time and time again and I'm pleased with his work.

'He's had some fantastic seasons and I don't think it's a bad run if you concede two goals in seven games against the teams we've played.

'He's made match-winning saves and he saved a point for us against Tottenham with the save (from Son Heung-min). Mentally he's a very strong keeper but I speak to him every day, that's fine. He's been at United for nine years now and developed into a mature keeper. 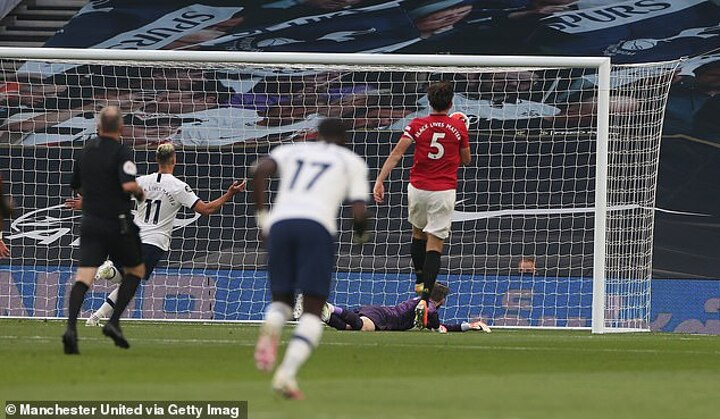 While Solskjaer's defence of De Gea is to be expected, Keane's wrath is well-founded. The statistics simply don't lie.

The former Atletico Madrid star has made more errors leading to a goal (seven) in the last two Premier League seasons combined than in his first seven put together (six).

Long-standing United servant Gary Neville recently claimed that De Gea's decline began two years ago at the 2018 World Cup in Russia, and he appears to have been proven correct. The 29-year-old enjoyed a spectacular 2017-18 campaign, but has failed to match those heroics. The last two seasons have since sparked a remarkable and concerning slump. 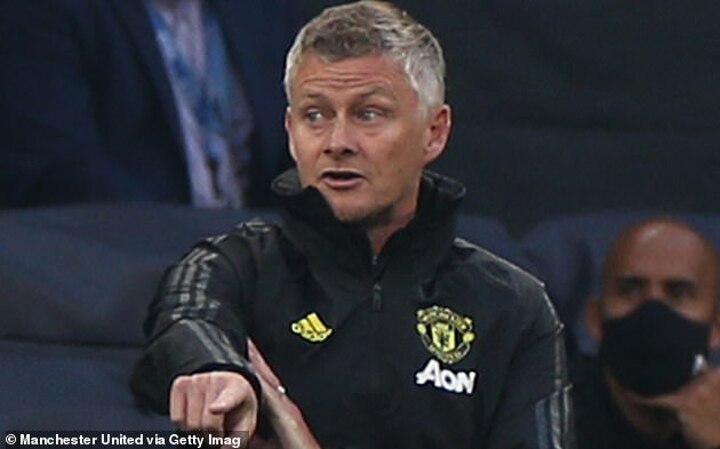 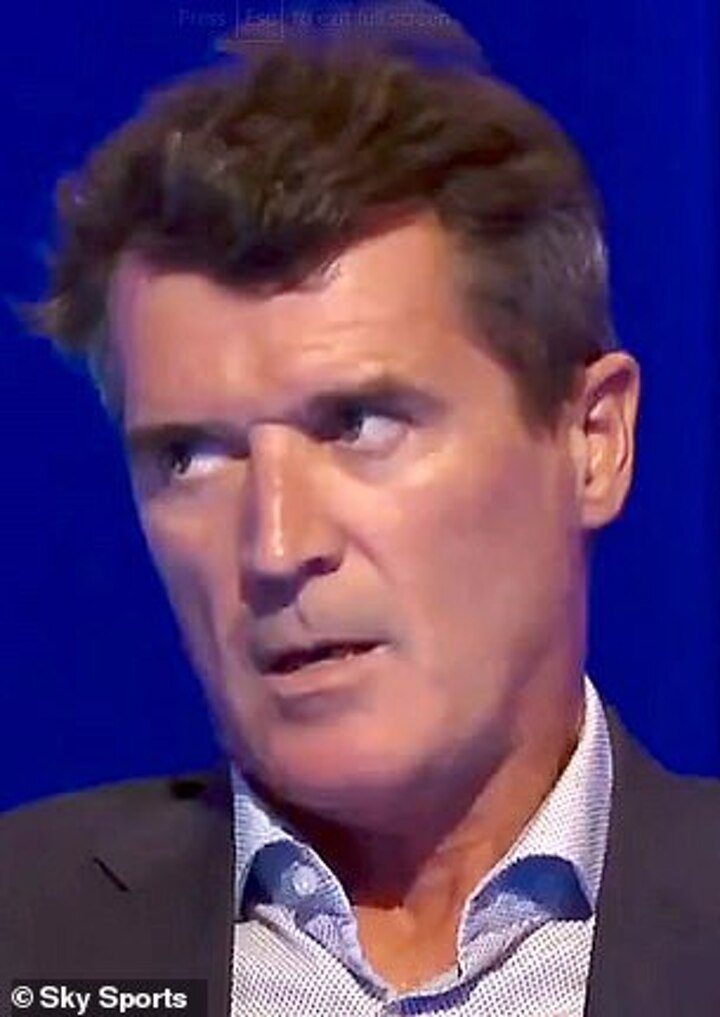 He shipped 54 goals last season, the start of the rot, and has so far let in 31 this term.

This total is already more than in four previous seasons, and there are still eight games remaining before the top flight is finally played to its conclusion after a lengthy delay.

The arrival of Ole Gunnar Solskjaer, coupled with the additions of Harry Maguire and Aaron Wan-Bissaka, appears to have improved United's back line.

The team have mostly proven difficult to break down this campaign, with De Gea playing a part in this, but their records of 31 goals conceded, the joint fourth-best record in the league, could have been better without De Gea's costly mistakes.

The Spain international has already clinched more clean sheets this season (eight) than the last campaign (seven) - but will fall short of his record amount.

That haul of 18 shut-outs, unsurprisingly, came during his unbeatable spell across 2017-18. 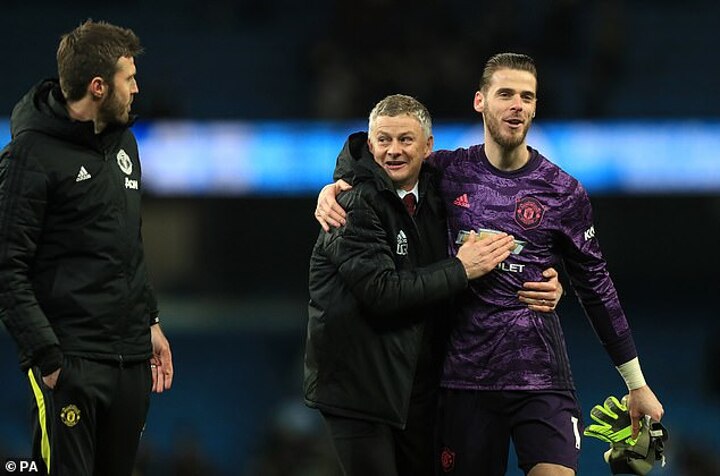 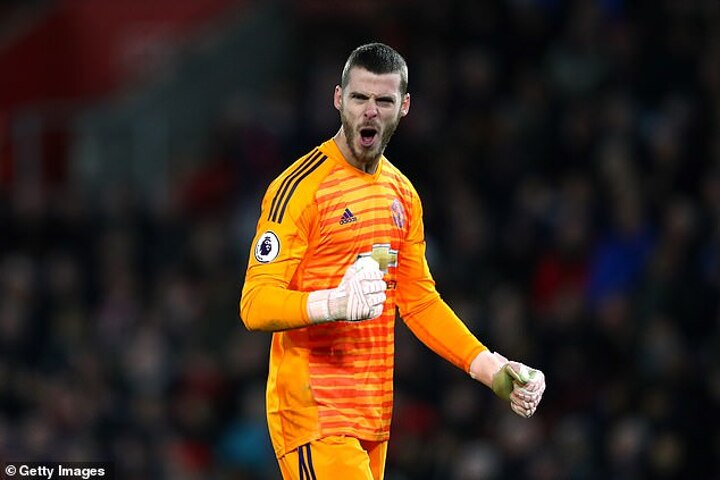 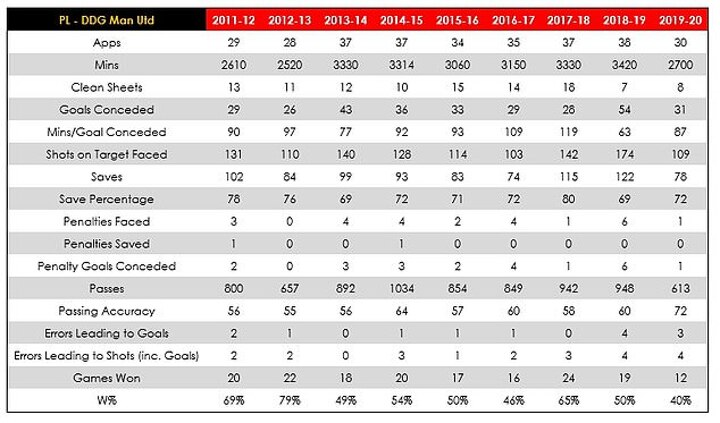 As it stands, his average minutes played before conceding a goal stands at 87 for this year. This marks a slight improvement from the previous campaign's below-par figure of 67 minutes - but there can be no denying that both statistics are worse than in every other season.

De Gea has made 78 saves since the start of the season, in comparison to the 122 stops from the previous one. This year's tally is lower than in all but one campaign.

His save ratio also stands at 72 per cent - which is worse than the figure for three seasons and the same as two others.

To cap off the misery, De Gea is experiencing his worst ever win ratio for United too. The 40 per cent figure is drastically lower than his most prolific season at Old Trafford, the 2012-13 campaign, which saw a victory percentage of 79 in a title-winning campaign.

Two notable mistakes in recent months have thrust De Gea firmly into the firing line. The worst of those arguably came against Watford in December. Ismaila Sarr's effort from distance looked set to be a routine catch for the keeper, but the ball evaded his grasp and squirmed into the net in hideously comical fashion. 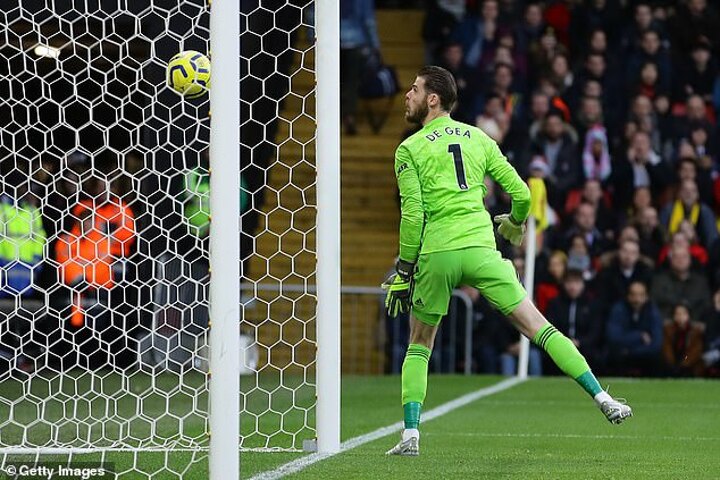 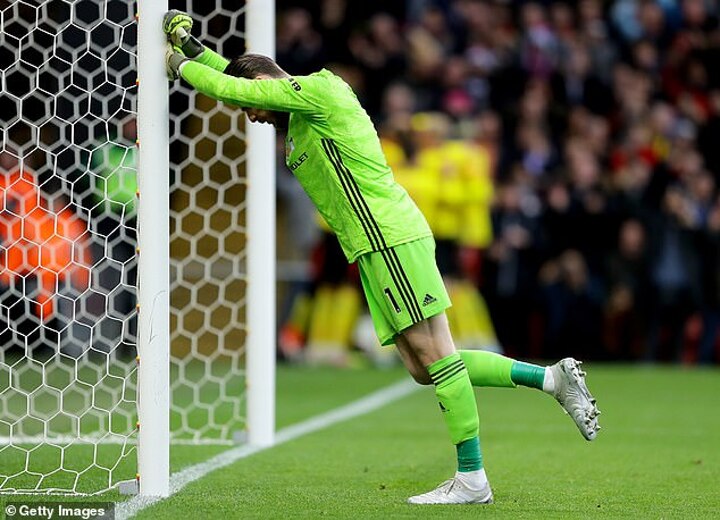 His hesitation in the clash with Everton in March was also capitalised upon in the most bizarre of circumstances. Harry Maguire opted to pass back to him, and De Gea was afforded seven seconds to launch the ball downfield. But after taking too long to weigh up his options, Dominic Calvert-Lewin had raced forward to close him down. The clearance struck the striker before ricocheting into the net.

Solskjaer launched a staunch defence of the under-fire superstar after that game, labelling him 'the best goalkeeper in the world', but even the usually affable Norwegian may have been questioning De Gea's future.

The 2017-18 campaign was undoubtedly a superb yardstick for the the Spaniard, but the two seasons that followed have been poor by his lofty standards. And the challenge to his position posed by youngster Dean Henderson, currently at Sheffield United, has piled the pressure onto his shoulders more than ever.

The relationship between United fans and De Gea remains a strong one. He committed to the club after the saga concerning his failed move to Real Madrid, and he has also sported the captain's armband on multiple occasions. He has been the fans' player of the year in four of the seasons that United have limped through since Sir Alex Ferguson's retirement. 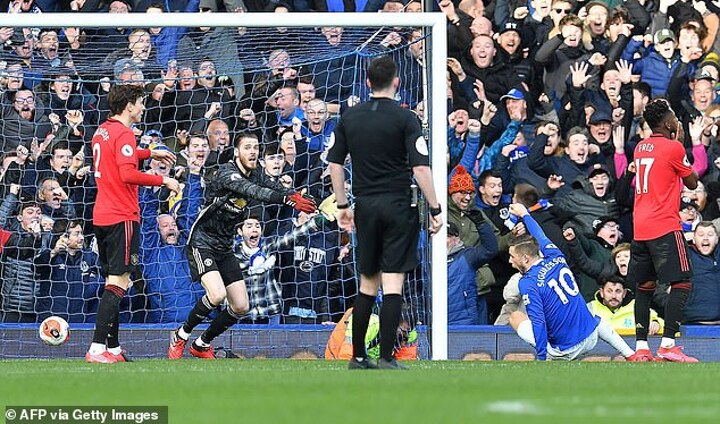 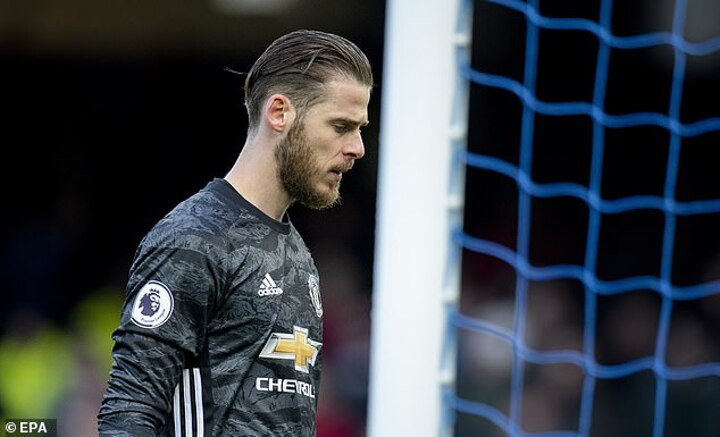 But there can be no more mistakes. Chelsea have pulled five points clear in the race to secure Champions League football next season, and the Old Trafford giants can't afford to slip up again.

With the scrutiny having been ramped up tenfold, De Gea must now ensure every catch is clean, every kick finds its target. With Dean Henderson having proven his class on loan at Sheffield United, De Gea hasn't been pushed to keep hold of the No 1 spot in this vein since the start of his tenure at the club, when he was slammed for his then slight physique and failure to take charge of his area.

So, perhaps his time at United has come full circle. The statistics point to a clear decline, and once again De Gea is scrapping to keep hold of his jersey. Any more mistakes threaten to further tarnish his impressive reputation, and may force Solskjaer into a decision he may not have seen coming when he took charge.