Not since a 2-0 defeat at Liverpool on 19 January 2020 have Manchester United been on the losing side of a Premier League match away from Old Trafford. The club's incredible unbeaten streak has lasted more than 12 months now, and has once more been lead by Bruno Fernandes ever since his arrival from Sporting Lisbon in that same month.

United's club record of 17 consecutive Premier League games on the road without defeat - set by the club's 1999 treble winners - was matched by the current crop of players thanks to their 2-1 win at Fulham last week. 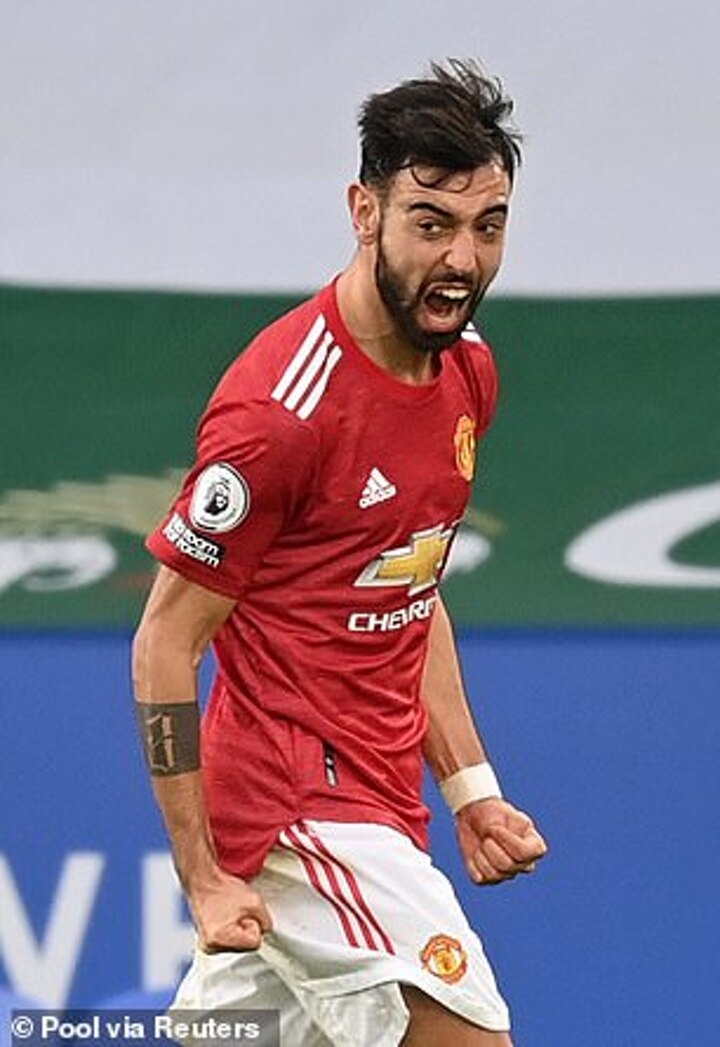 Now their quest will be to go one step better than one of the club's most fabled sides, but standing in the way of that goal are Arsenal, where Ole Gunnar Solskjaer's team have lost four of their last five top-flight games.

United could not wish to go to the Emirates Stadium however on a better run on their travels, but who and what has been behind their incredible streak on the road?

Here, Sportsmail crunch the numbers to look at what statistical trends have been behind United's 12-month unbeaten run on the road, and whether it can help them stand the test of one of their least favourite hunting grounds in recent seasons.

Ever since an eventful 2-0 victory away at Chelsea in mid-February last year - with goals coming from the heads of Anthony Martial and Harry Maguire - United's form on the road has gone from strength to strength, picking up 43 points.

A 17-game streak in the league has seen them win 13 of those and draw the other four, the latter of which came at Everton and Tottenham last season and Leicester and Liverpool during the current campaign.

The Toffees in fact have the next best away record in the league over the same time period, having taken a comparatively modest 28 points from their 16 games, but which has included six defeats.

Moreover, just as has been the case this season overall with the club's proclivity to go a goal behind, the statistics of the away run demonstrate once more just how well Solskjaer's United side react when the game turns against them. 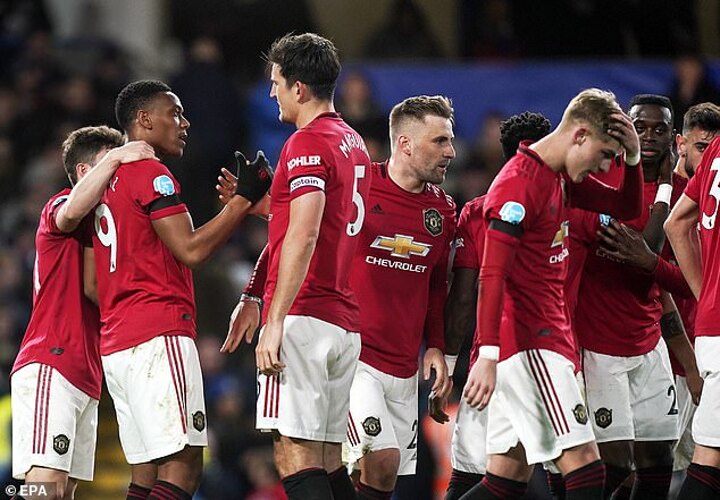 They were at least one goal behind in nine of the 17 games that constitutes their current away streak, and came from behind to win all but two of them, while they have gone ahead by at least one goal in 14 of those games.

The most recent comeback victory came last week when Ademola Lookman put Fulham ahead at Craven Cottage last week, only for Edinson Cavani and Paul Pogba to turn the tables in United's favour.

That ability to bounce back has seen United gain an incredible 23 points from losing positions, a total more than double of any other side in the league.

Tottenham and West Ham feature next on the list, but with 10 points and seven points gained from such positions respectively.

Moreover, a look at United's possession stats and ruthlessness in front of goal demonstrates why the counter attack remains such a devastating tactic for them. 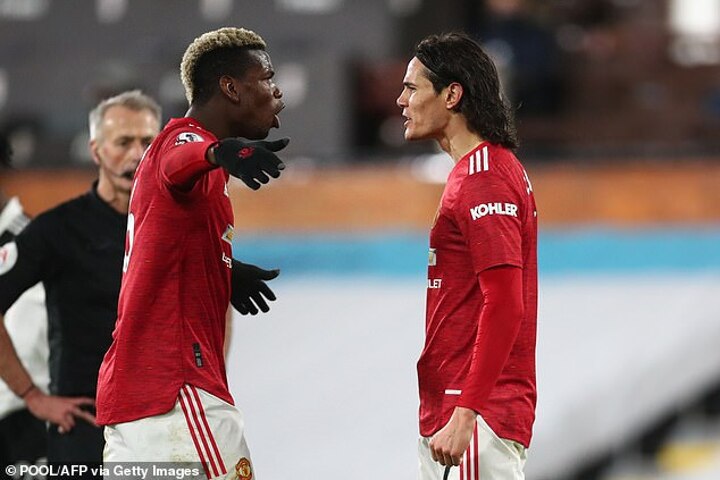 United's average possession over the 17 games sits at just below 55 per cent, which suggests they have not looked to suffocate the opposition before striking but simply aiming to deliver regular killer blows.

That counter-attacking system requires crisp and pinpoint passing, and their overall passing accuracy standing at 84 per cent seems to reflect that.

The additions of Fernandes and Cavani have certainly helped with their end product, with United scoring 38 goals on the road in the run, seeing them average more than two goals per game.

The next best return in the league in terms of goals scored on their travels again is Tottenham, who have netted 29 times, albeit from one fewer Premier League fixture.

There is no great disparity between the shots United have got off and the ones they have conceded, with the side striking at goal 223 times while they have faced 210.

But the difference comes in the form of United managing to get 97 of those efforts on target, while their rivals have managed to test or beat the United shot stopper with just 57 of those efforts. 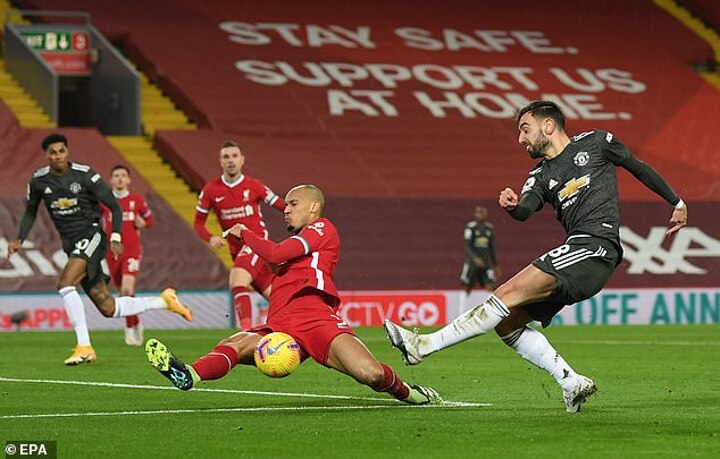 Given that United have gone behind in seven of the games that they have ended up winning on the road since February, it is unsurprising to learn that Solskjaer's men have netted more goals in the second half compared to the first.

The club have scored 15 goals in the first half of matches on the road, while a resounding 23 have come in the second part of their top-flight fixtures, six of which came in the Cavani-inspired comeback from two goals down at Southampton and the 4-1 victory at Newcastle, when Fernandes, Marcus Rashford and Aaron Wan-Bissaka all scored after the 85th minute.

That victory at St James' Park represents one of the three occasions United have won by three goals on their Premier League travels in the past calendar year - their biggest margin of victory - after 3-0 victories at Brighton and Aston Villa also came following the restart in 2019/20. 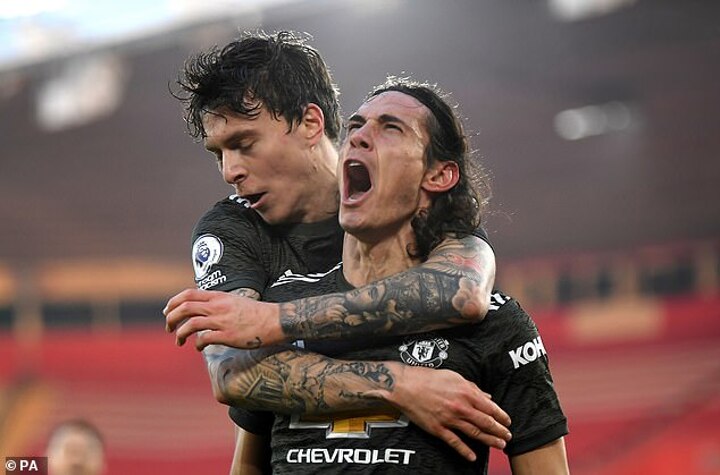 Meanwhile, at the other end of the field, United have conceded less than half of the goals they have scored, with David de Gea and Dean Henderson letting in just 14 strikes from opposition players between them.

Only Ederson has a better record away from his home ground in this period, with Manchester City having conceded 13 goals, although they have played one game fewer than their city rivals.

Seven clean sheets have come from those games for United, and only two errors have been made leading to goals, with Henderson's blunder at former club Sheffield United constituting one of them.

Only Arsenal and Burnley have kept more clean sheets than the two United stoppers, and those two sides along with Man City are the only teams that can boast a better clean sheet percentage than the Red Devils' 41 per cent.

A set piece may have been part of United's undoing in their shock defeat by the Blades in midweek, but it appears they have some sort of a grasp of defending them away from home, with just five of the 14 goals they have let in coming from such situations. 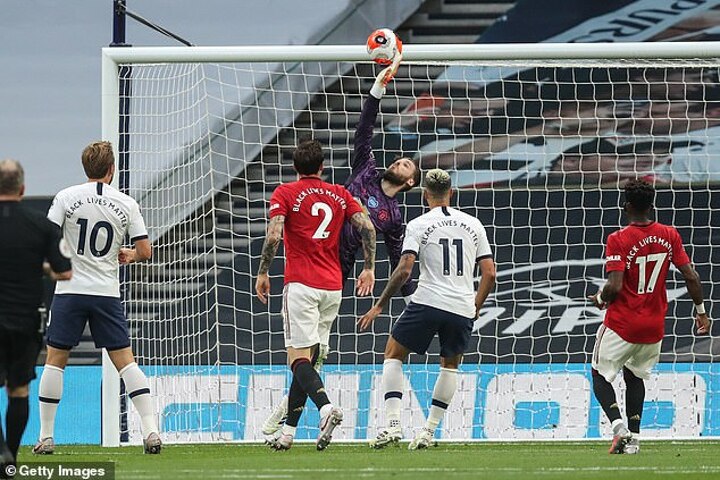 Portuguese midfield maestro Fernandes has been credited as being a main factor behind United's resurgence in domestic matters.

The 26-year-old has led by example on the field and with his leadership in the dressing room, and the former is certainly reflected by his statistics from away days.

The United star leads the charts for goals scored and assists recorded since February 2020 away from home of any player in the Premier League, having netted 12 of United's 38 goals and set up a further seven strikes for his club team-mates.

Fernandes also leads the charge in both halves, having scored five of their first-half goals and seven in the second half, which is not bettered by any of his colleagues.

Rashford may have scored just one home league goal this term, but he has clearly been influential too away from Old Trafford.

Six of the seven away goals he has scored in this run have come this season, while he has also recorded six assists over the course of the 17 games, putting him joint-second with Spurs' Harry Kane for most assists in the time frame. 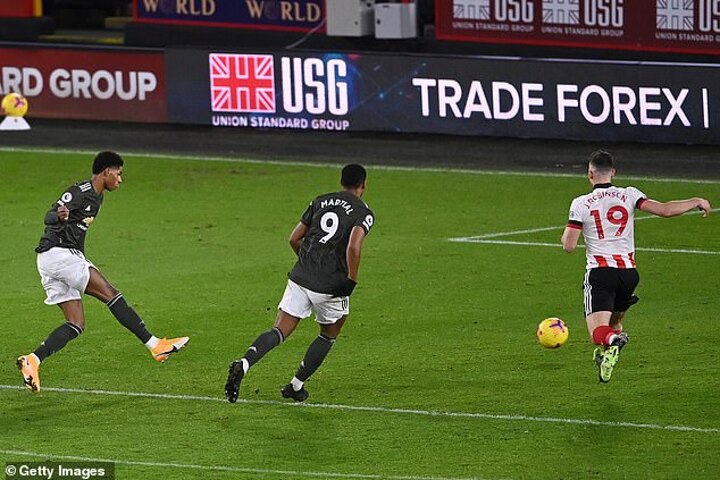 The breakdown of goals in the two halves also demonstrates the impact that Cavani has had in front of goal as well as Paul Pogba's decisive impact on recent results.

The France World Cup winner has scored four league goals away from home in United's run, all of which have come in the second half of matches, including stunning recent winners at Burnley and Fulham. 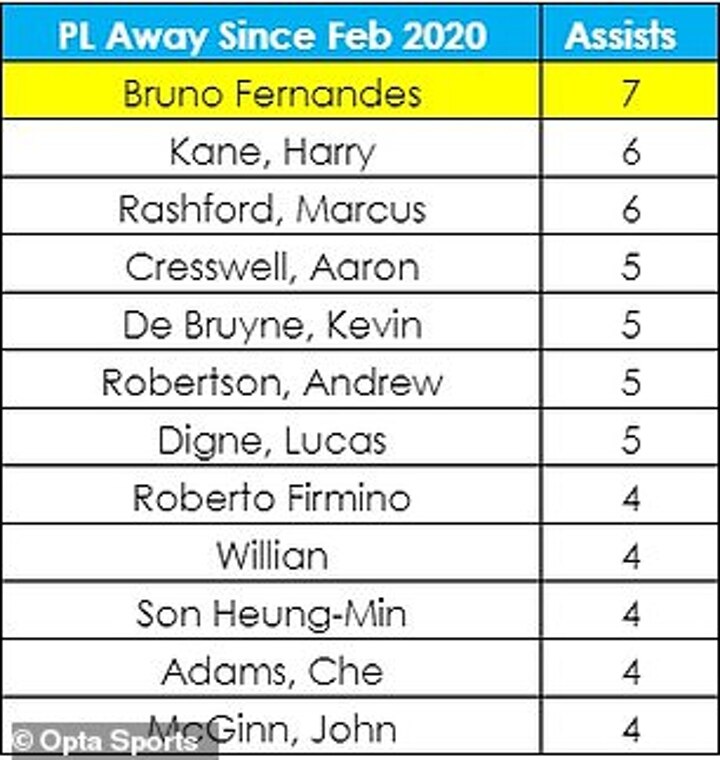 Uruguayan forward Cavani meanwhile has netted three of his four United goals on the road in the second half, two of which came in the comeback he and Fernandes led at St Mary's in late November.

Anthony Martial and Mason Greenwood have played more of a peripheral role in the goalscoring machine but make up the top six of most goals scored with three each, with the pair having netted twice in the first half of matches constituting the unbeaten streak.

Centre-back Harry Maguire sits just behind the duo on two goals with headers at Stamford Bridge and St James' Park, while the United captain has also played more minutes than any of his team-mates.

Ahead of the weekend visit to Arsenal, the England defender has played 1,530 minutes on the road, which is more than 100 minutes more Fernandes, who is next on the list having been on the field for 1,422 minutes during this run. 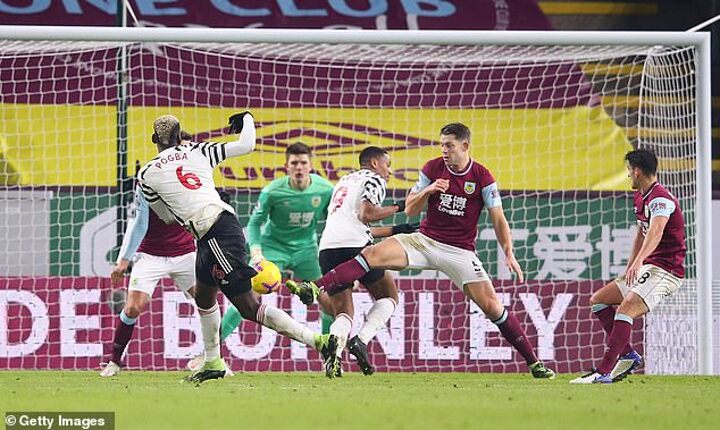 So what's gone wrong for United at Arsenal?

As United aim for that club record 18th league game away without defeat, they travel for a late afternoon kick-off on Saturday to a ground where they have struggled to perform in recent seasons.

In 2018/19, David de Gea misjudged a Granit Xhaka effort from range before Pierre-Emerick Aubameyang sealed the points for the Gunners from the penalty spot.

United's most recent victory at the Emirates Stadium came two months prior to that defeat, knocking the Gunners out of the FA Cup in the fourth round in January 2019. 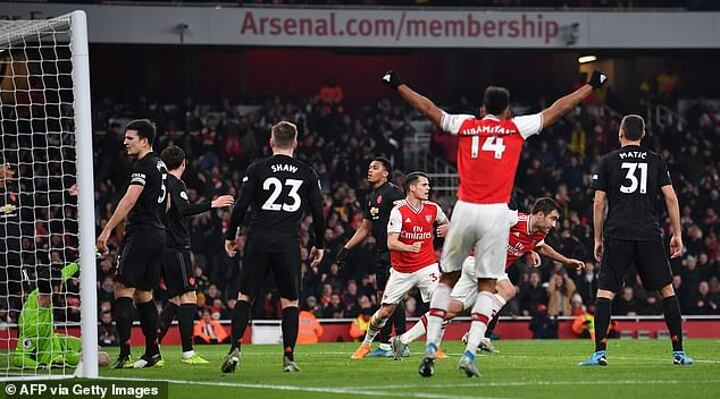 And a glimpse at the statistics then compared to their more recent reverses offers up an explanation of where they have gone wrong in recent seasons, but why their current run offers hope of ending their rut in north London.

Alexis Sanchez, Jesse Lingard and Anthony Martial were all on target in the FA Cup fixture two years ago, in which United struck at goal on eight occasions.

Half of those were on target, with Paul Pogba's shot on the break that Petr Cech pushed into Martial's path for a decisive third goal the other effort.

However, their ability to repeat such accuracy in front of goal has been found wanting more recently at the Emirates Stadium, with their top-flight victory over Arsenal in the last five calendar years coming in December 2017. Chance creation has been no issue at all against Unai Emery and Mikel Arteta's side, having tried to test Bernd Leno with 14 shots in March 2019 and with 10 on New Year's Day last year.

However, both games ended with United failing to beat the Germany international, with a perceived lack of ruthlessness behind their inability to register their side on the scoresheet from the four attempts each that they managed in those two games.

The Gunners meanwhile had exactly the same number of shots as United in the two contests, but were able to carve out two goals from the three shots on target and as many past David de Gea from their four on target in their most recent clash in north London.

However, with Cavani and Fernandes now playing prominent roles in the scoring of goals, United's efficiency - while still not in keeping with their other lofty ambitions - has certainly improved.

United edged possession - with 52 per cent and 54 per cent - on their two most recent visits and their passing accuracy came in at 81 and 85 per cent in the pair of fixtures.

Now if they can add the final element - albeit the most difficult one - to the puzzle, they may well find themselves sealing just their second league victory at Arsenal since their 2-1 win in November 2014. 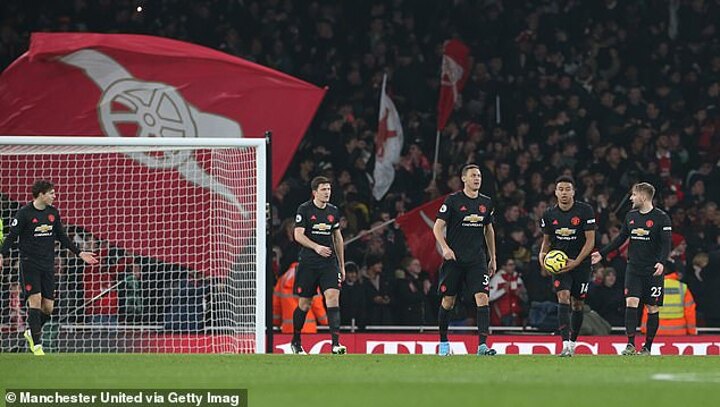