There is a photograph of Roy Evans and Gerard Houllier, from the day in July 1998 that Liverpool's joint managers were presented to the press, that, in hindsight, appears to have given a subtle but foreboding indication of what was to come. 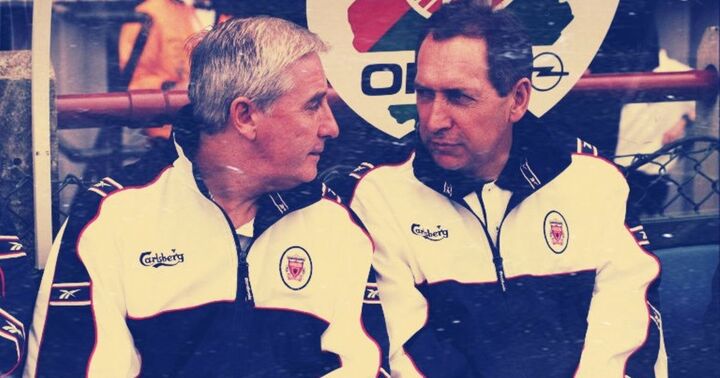 They stand together in an empty Anfield, surrounded on all sides by red seats and with the pristine pitch, yet to be scuffed by the wear of the coming season, glowing behind them. Houllier has one hand on the red scarf they hold above their heads, the other on Evans' shoulder. His cheeks glisten above a smile of giddy optimism.

Evans, holding the other end of the same scarf, attempts a smile also, but what he musters is barely more than a grimace. His eyes wear the vacant stare of a man who has been given a glimpse into an unkind future. He has seen the condemned path he is being ushered down.

Houllier's most recent role had been as technical director of the French Football Federation, in which his work was credited as an influence on his nation's World Cup triumph on home soil less than a week before he arrived at Anfield. Although little was known of him by the average English football fan at the time, he was synonymous as much with being the man who failed to guide France to qualification for USA '94 as he was for the only major trophy of his managerial career up to that point, the 1984-85 Ligue 1 championship with Paris Saint-Germain.

The 50-year-old was respected within the game as a coach and footballing mind, though. Arsenal, the reigning Premier League champions, had been revolutionised by Arsene Wenger, himself far from a household name before his move to England. Liverpool, it seemed, sought a Frenchman of their own to wrest them from the mire of mediocrity they found themselves in.

Houllier had history in the city, having spent a year on Merseyside during his previous career as a school teacher, taking in games at Anfield during this time. And when Kenny Dalglish unexpectedly resigned as manager in 1991, Houllier's was a left-field name linked with the vacant position before Graeme Souness was appointed. It seemed Liverpool might miss out on their man on this occasion, though, as the French coach was close to making his return to club football as Celtic boss.

Peter Robinson, Liverpool's vice-chairman, was the man pushing hardest for Houllier, both within the club's boardroom and with the coach. He had been friends with the Frenchman for more than a decade and even recommended him to Tottenham in the mid-80s. Sensing the need for an urgent intervention, Robinson picked up the phone.

“Have you set your heart on Celtic?” he asked Houllier.

“Not really,” the coach replied. “There's a lot to think about.”

“But you'd be interested in managing abroad?” Robinson enquired.

“Then there's only one club you can come to,” Robinson said. “Liverpool.”

By the summer of 1998, Evans had been a Liverpool employee for 35 years, as a player, coach and, after taking over from Souness in 1994, manager. During his four seasons in charge, he'd nurtured through a gifted crop of young players which included the likes of Steve McManaman, Robbie Fowler and, most recently, Michael Owen. The Reds were among the most attractive sides to watch and returned respectable Premier League finishes of fourth, third, fourth and third.

But Liverpool were chronically inconsistent, and porous defensively. Attempts were made to sign Lillian Thuram and Marcel Desailly, but the French defenders could not be lured to Merseyside from Serie A. The Reds picked up fewer points than the previous campaign in each of Evans' seasons in charge. After an initial lift post-Souness, they were getting no closer to challenging Arsenal and Manchester United at the top of the league, and one League Cup success marked a meagre trophy haul after what the club considered adequate investment. After years of internal appointments, returning heroes and reliance on “Boot Room” expertise, it was determined some outside influence and fresh ideas were necessary.

Evans initially thought Houllier was coming in to preplace the retiring Ronnie Moran as part of his coaching staff. The board felt that wouldn't give Houllier the authority his experience and standing in the game commanded, though. He was considered for a Director of Football type position, but it was decided he should be in closer contact with the players on the training field than this role would allow. In the first-ever meeting between the pair, with key board members also present, it was confirmed that Evans and Houllier would be joint managers.

The notion of joint managers was, and still is, highly uncommon, and rarely successful. In the early 1990s, former Liverpool duo Ray Clemence and Doug Livermore were joint head coaches at Spurs, while Bolton's experiment with Colin Todd and Roy MacFarland as joint bosses lasted only half of the 1995-96 season. It was curious, then, that Liverpool saw value in the flawed concept, and there was confusion among players and managers over how responsibility was divided between the two figureheads.

At the beginning, both men were committed to making their unusual working relationship a success. They differed philosophically – Evans, so long associated with the club, was a traditionalist; Houllier saw a team and methodology in need of drastic updating – but that was the point of bringing them together. And the pair remained largely cordial in their joint dealings throughout, with no personal ill-feeling harboured even when in disagreement.

For a short while, it looked like it might actually work. Liverpool began the 1998-99 season brightly, with three wins and a draw from their first four league games, including a 4-1 thumping of Newcastle at St James' Park. Things quickly deteriorated, though. In their next game, the Reds lost 2-1 to West Ham at Upton Park, and that match brought the first major selection fallout between the co-managers. Evans was keen to stick with the same line-up from the Newcastle fixture, feeling the players would be buoyant after such an impressive win. Houllier thought the Hammers were a more dangerous side and wanted to drop striker Karl-Heinz Riedle for an extra defender, Steve Harkness. The Frenchman got his way, but his decision was damned by the defeat and the fact Riedle, a late substitute, scored Liverpool's only goal.

Resentment began to boil. Houllier and Evans had both signed-off on the purchase of Vegard Heggem that summer, but they couldn't agree on which position to play the Norwegian in. Houllier's introduction of heart-rate monitors in training and modernisation of the players' diet was accepted, but he trod on toes when insisting that white wine – rather than the permitted red – was not allowed at meal time. And he irked Evans further by undermining him over innocuous things such as what time the team bus would depart for matches, telling the players the coach would leave 15 minutes later than Evans had already instructed.

Evans also felt that Houllier was leaving an unfair amount of the unpleasant aspects of their shared remit up to him. They had agreed that whenever a player was to be left out, they would break the news together. But when Jason MacAteer was dropped following a run of poor form, Evans couldn't find Houllier when the time came to tell the player of their decision. Evans delivered the bad news alone and later said he found Houllier in the boardroom, claiming he'd forgotten about their shared obligation. The Frenchman's decision to sack fitness coach Andy Clarke, an Evans appointment, was also unpopular.

It was on a flight home from a UEFA Cup trip to Valencia on November 3 that Evans realised he could go on no longer. Liverpool had won just once in their last seven league games, but they managed to draw 2-2 in Spain, securing a place in the third round of the continental competition via away goals. They'd only just scraped through, with McManaman and Paul Ince having received contentious red cards and a David James error jeopardising their progress.

In the dressing-room afterwards, Houllier was spotted rifling through the players' discarded shirts, picking out three. When asked what he was doing, he said he was going to give them to the match officials, a French trio. Evans was furious, feeling the referee had almost cost them the game, and should not be rewarded in such a way. Houllier is then said to have changed his story, claiming instead that the shirts were for Valencia's contingent of French players. This version pleased Evans no more, who wanted simply to close ranks. Heated words were exchanged. Houllier threw down the shirts and stomped out of the dressing-room. In the hours after the match, Evans decided to hand in his resignation, although he would first see out the next two games, defeats to lowly Derby in the Premier League and Tottenham in the League Cup.

“How could it work?” Robbie Fowler later said of the bizarre managerial arrangement. “Who had the final say in team selection? Who was in charge? The players didn't know, and straight away that made it unworkable.”

When Evans informed David Moores of his decision, the chairman was devastated. Moores and director Tom Saunders pleaded with Evans to reconsider, even offering him others positions at the club. The manager's mind was made up, though. In a statement released to confirm his departure, Evans said, rather poetically, that he didn't want to stick around and “become a ghost on the wall”.

Evans was only 50 years old when he left Liverpool, but he would never manage again on a full-time basis. He was overlooked in the running for the Nottingham Forest and Bolton jobs in the years after his departure, and his only other managerial stint was, coincidentally, as joint caretaker boss of Fulham for a month in 2000, alongside former Red Riedle.

Liverpool went on to finish the 1998-99 season seventh, but Houllier would achieve considerable success in his five and a half years in sole charge of the Reds, including a treble of FA Cup, League Cup and UEFA Cup in 2001.

History remembers Liverpool's short-lived joint-managers experiment as a great embarrassment, a bungled attempt to marry the past with the future which undermined one of Anfield's greatest servants. Moores and the other board members expressed genuine respect for Evans and regret at how things ended for him at the club. But it was that respect that meant he was kept on as joint manager when Houllier was brought in, rather than simply replaced. In the end, that did nobody any favours.