With Real Madrid captain Sergio Ramos now free to discuss terms with other clubs, Los Blancos have been plunged into another crisis. 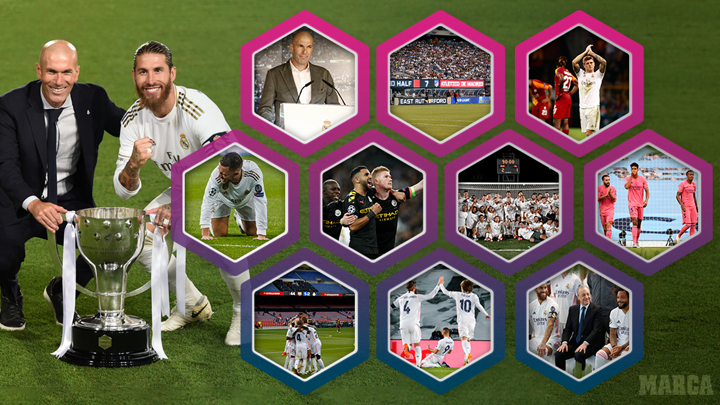 It's nothing new for Zinedine Zidane, who has had multiple crisis moments to manage since his return to the club in March of 2019.

With this one falling just a week before the Supercopa de Espana, here we look back at other times Zidane has had drama to sort out.

Zidane returned to a fractured dressing-room in 2019. The first thing he had to do was rebuild.

The first months were difficult and included some bad results, but he managed to convince his squad that they could once again become what they had been before.

Nothing in the 2019/20 pre-season went according to plan for Zidane. Results were bad, and so was the style of play.

Then there was the Gareth Bale saga, with Zidane making it abundantly clear he wanted the Welshman out of the club.

"We're going to have a good season," Zidane said.

No one believed him, but on the first day of the new LaLiga Santander season they won at Celta Vigo.

3. All or nothing in Istanbul

Zidane looked in trouble after seeing his men lose to Real Mallorca in the league, and having just one point from six in the UEFA Champions League.

It was, therefore, all on the line against Galatasary in their third Champions League group game on October 22, but Los Blancos eked out a 1-0 win and saved their coach.

Zidane has always backed Eden Hazard, but nothing has worked out so far, with the now 30-year-old still yet to justify his coach's faith in him.

With Hazard now finally coming back to fitness, the early months of 2021 will reveal much.

Though Los Blancos won the Supercopa de Espana early last year, the winds in their favour soon turned against them.

They lost in the Copa del Rey against Real Sociedad and then were beaten at home by Manchester City in the Champions League.

Their league form thereafter was patchy too, losing away at Levante and Real Betis to once again throw doubt around Zidane's future.

6. Returning from lockdown to win a title

Football came back last June after the coronavirus lockdown and Real Madrid were a machine, stealing the LaLiga Santander title from Barcelona.

And they did all that despite VAR controversies and noise surrounding the futures of Bale and James Rodriguez.

The doubts that had surfaced during the previous campaign reared their head again.

And after a 0-0 draw with Real Sociedad - which involved some interesting selection decisions by Zidane - people were once again calling for his head.

8. Life or death at the Camp Nou

After consecutive defeats to Cadiz and Shakhtar Donetsk, a third would have been catastrophic - particularly as it was against Barcelona.

But once more, the team showed up to win 3-1, putting to bed the rumours of Mauricio Pochettino taking over in the hotseat.

9. That night in Kiev

The pressure grew on Zidane once again after a dismal loss in the Ukraine.

With the three fixtures after that game being Sevilla, Atletico and Borussia Monchengladbach, the future looked ominous.

But Los Merengues won all three, qualifying for the round of 16 in the Champions League once again.

Despite a run of good form during the last few months, Zidane knew that renewals could disrupt his team's momentum.

He said as much before the game against Celta Vigo.

With Ramos' contract set to overshadow the coming fixtures, it will be up to Zidane to try and control the dressing room during this tricky period.