Liverpool's transfer business has come under the microscope after Jamie Carragher claimed it left them trailing behind their Premier League rivals at the turn of the century. 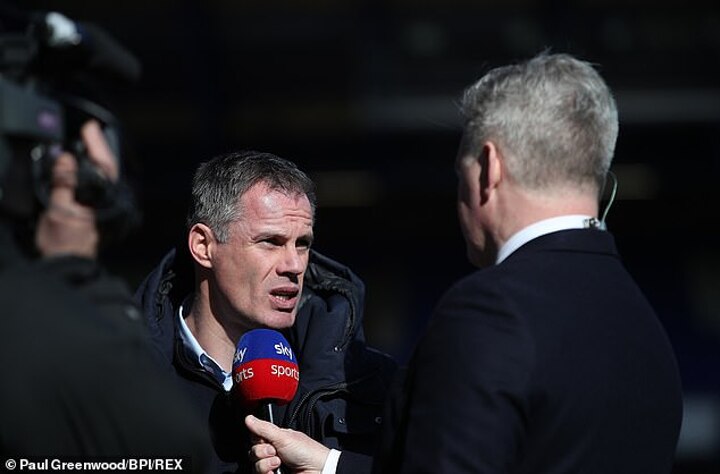 The Anfield legend made headlines when he admitted the club's transfer business under Gerard Houllier between 1998 and 2004 left them playing catch-up to their rivals, particularly Arsenal.

Carragher told Sky Sports: 'I think we were spending similar to Arsenal, and the big difference between [Gerard] Houllier and Arsene Wenger, though I adore Houllier, Wenger was a genius in the transfer market. 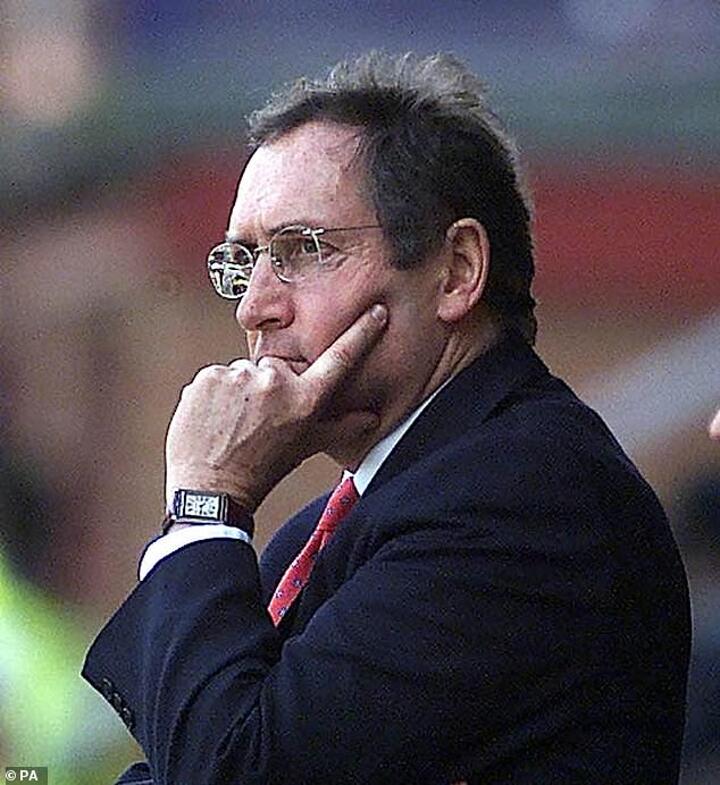 'We signed Emile Heskey for £11 million, Wenger signed Henry for £11m. If we signed Nick Barmby for £6m, they signed Robert Pires for £6m.

'They also got Sol Campbell on a free at that time. They just became superstars, whereas ours became very good players.

'You see Christian Ziege; I think he was possibly the highest-paid player in the Premier League and it felt like the end of him playing left-back for Liverpool (when he made errors in a 4-3 loss to Leeds), and he ended up playing left midfield.

'Like Rio Ferdinand for £30m in the summer of 2002 after Arsenal won the league.  For us, we'd spend that money on four players, and you needed them all to work.'

Below are the major signings of the Houllier era - so were there were more hits than misses in his six years on Merseyside? 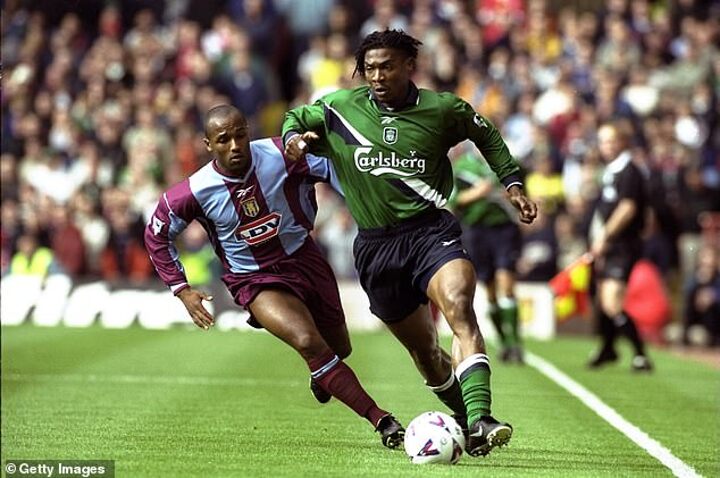 Jean Michel who? Houllier's first signing in English football is a good pub quiz question. Few remember the French journeyman who arrived from Istanbulspor in November 1998. He had to wait three months for his debut, and ended up playing only 47 minutes in two substitute appearances before he was shipped back to France.

A colourful character who enjoyed a colourful career. Song spent 18 months at Anfield between 1999 and 2000 but faded after a bright start. He was committed in the challenge but too often let ill-discipline get the better of him.

More talented footballers have played for Liverpool. But they haven't all starred in a Champions League final. You can never take that away from Traore, who somehow spent seven long years at Anfield without ever doing much at all. Also responsible for one of the most comical own goals of all time, backheeling over the line against Burnley in 2005. 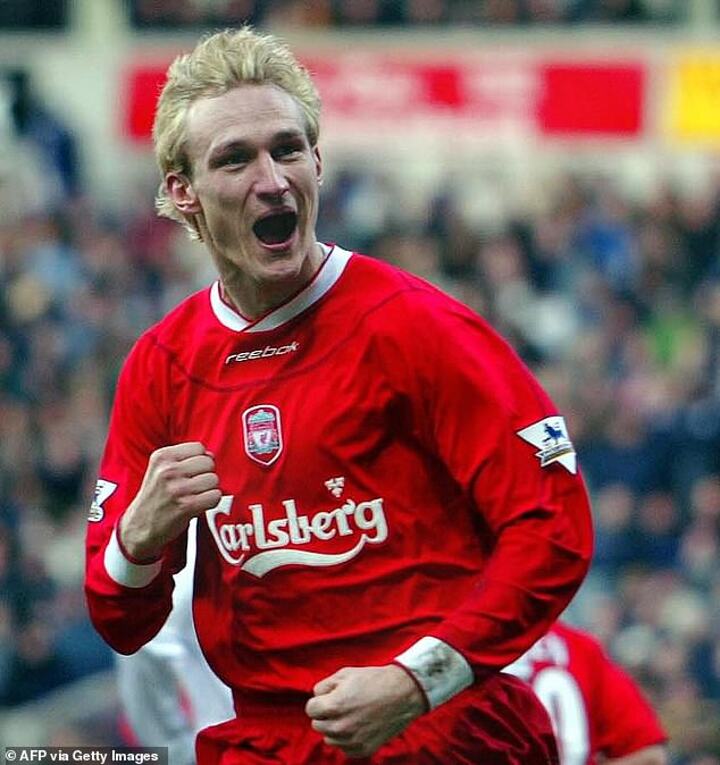 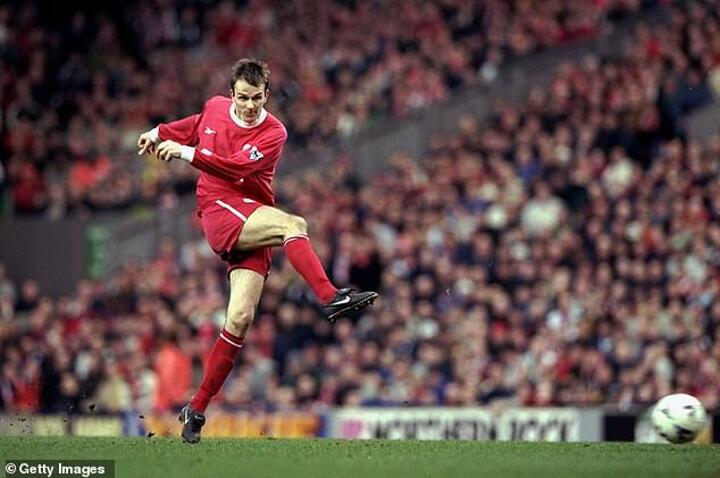 Few had heard of the towering Finnish centre-back when he arrived for a small fee from Willem II in 1999. Ten years, 464 appearances and 10 trophies later there is little argument that he was Houllier's greatest signing.

The Czech star had big shoes to fill when he replaced Steve McManaman. Injury dogged his time on Merseyside, restricting him to just 183 appearances in six years. But his quality was clear whenever he did get on the pitch, and his goalscoring role in the Miracle of Istanbul was quite the parting gift.

Often regarded as a joke figure by armchair fans, but Camara did little wrong in his short Liverpool career and is fondly remembered.. He scored 10 goals in his one full season, including a winner at Highbury and an emotional winner against West Ham, where he sank to his knees in tears the day after the passing of his father. 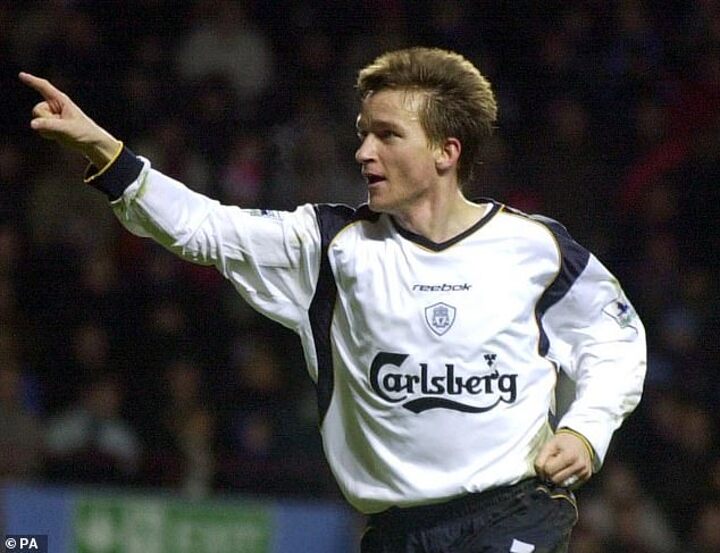 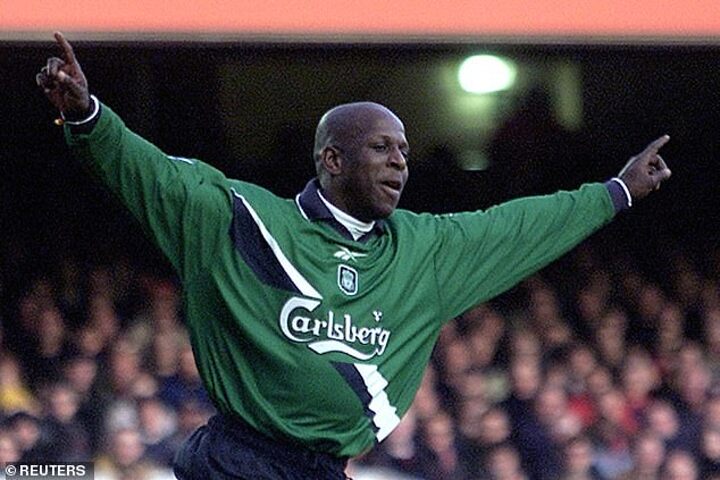 One half of a formidable centre-back pairing alongside Hyypia, but the Swiss was viewed with scepticism when he arrived from Blackburn. That soon disappeared. Infamously remembered for his handball on the line against Thierry Henry in the 2001 FA Cup final, but otherwise was a brilliant bargain.

The Dutchman may have been between the sticks for Liverpool's cup treble in 2001, but he never truly convinced. An inconsistent shot-stopper and susceptible at crosses, he once famously blamed 'ice on the ball' for a mistake at Middlesbrough. Houllier was ruthless when he finally lost patience, replacing him with not one but two goalkeepers in one day.

Meijer became a cult hero on the Kop for his endless and tireless running. He never scored, but he celebrated every little decision that went his way like a goal. Lasted just one year but remains an avid fan and was among Liverpool supporters in Dortmund for the UEFA Cup final in 2001. 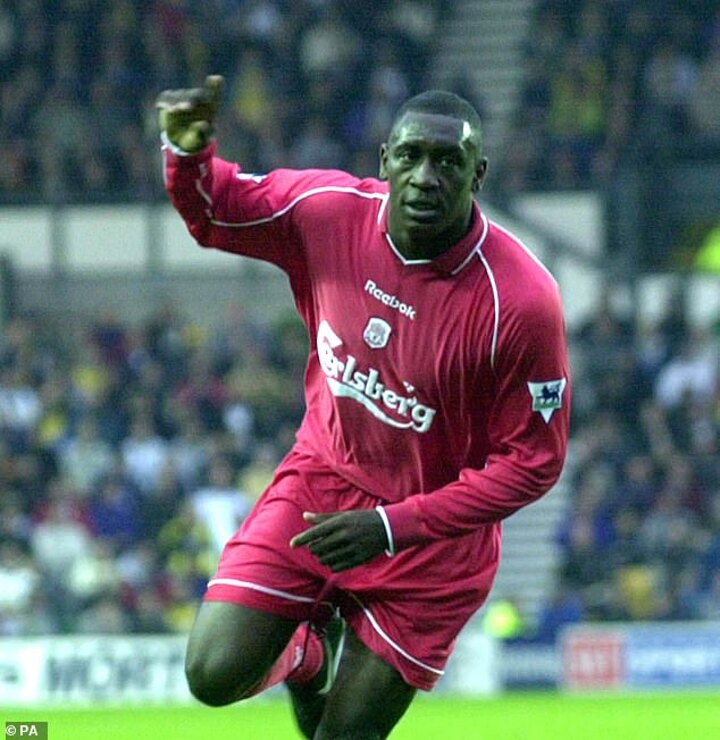 Liverpool were often accused of having a soft centre in the 90s, but the arrival of Hamann truly changed that. The German lifted nine pieces of silverware in seven years and his half-time introduction transformed the Champions League final in 2005.

Much-maligned later in his career, but Heskey spent his best years at Liverpool and formed a potent partnership with Michael Owen - who went on to win the Ballon d'Or in no small part due to Heskey's help. The record signing scored 22 times in the cup treble season.

A World Cup winner with France, Diomede was the first arrival in a busy summer of 2000. But the winger failed to make any impression, playing just five times in three years. Who knows how different his Anfield career could have been if a spectacular bicycle kick in his second game against Sunderland hadn't been stopped on the line? 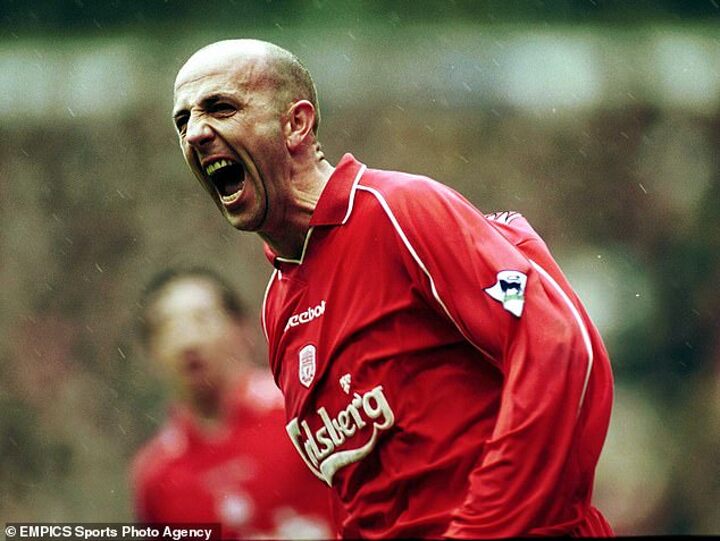 Eyebrows were raised and heads were scratched when Houllier brought 35-year-old McAllister to Anfield on a free from Coventry. But the veteran Scot rose to the challenge, scoring a famous long-range stoppage-time winner at Goodison Park and the decisive penalty in the UEFA Cup semi-final against Barcelona, before assisting the Alaves own goal that clinched the final.

Liverpool have had a long line of unreliable back-up goalkeepers, and it probably all started with Arphexad. The bench-warmer, signed from Leicester, won as many trophies as he made appearances - six.

The acquisition of Babbel on a free transfer from Bayern Munich was a real coup for Houllier. He arrived with real pedigree and performed with distinction, scoring in the UEFA Cup final to cap a season where his rampaging runs from right-back were a prominent feature. Unable to make a full recovery after being struck down by the debilitating Guillain-Barre Syndrome in late 2001.

Barmby sent shockwaves across Merseyside when he swapped Everton for Liverpool. He spent just two seasons at Anfield, but his eight goals in 2000-01 more than played their part in a memorable season and he was an England regular. 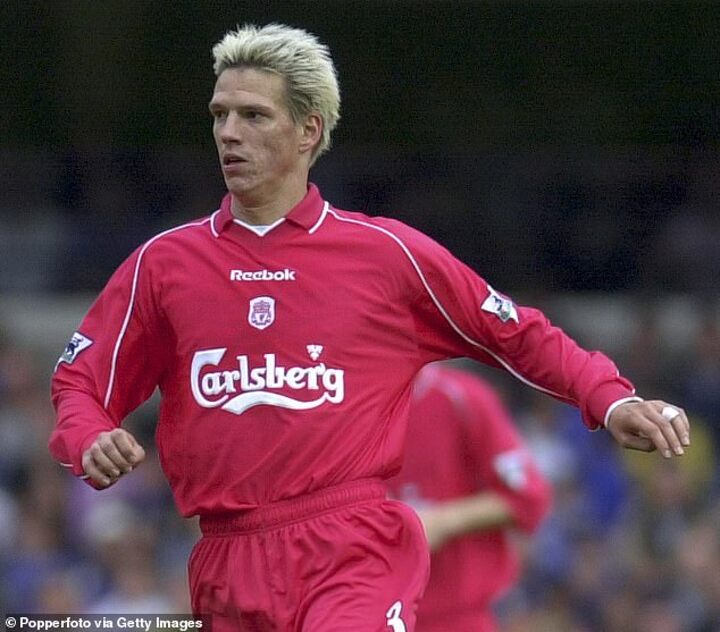 Another high-profile German defender, Ziege arrived in a blaze of controversy from Middlesbrough who claimed Liverpool had made an illegal approach for the player, which they were later fined £20,000 for by the FA. Ziege never fit in at Anfield with both his defending and attitude leaving plenty to be desired.

Houllier showed off his French connections when he plucked Vignal from Montpellier for a snip in September 2000. He made only 20 appearances and left little lasting impression in five years.

Liverpool fought off competition from all over Europe for the highly-rated Croat, billed as an all-action, box-to-box midfielder. But he never really justified the hype. Houllier tried to convert him to a centre-back with little joy, but he became a cult hero for his role in Liverpool's Champions League run in 2005.

Houllier pulled off another coup when he persuaded Litmanen to swap Barcelona for Liverpool in January 2001. Ankle injuries dogged his short stay on Merseyside and limited him to just 43 appearances, but his quality and pedigree was obvious every time he stepped on the pitch. 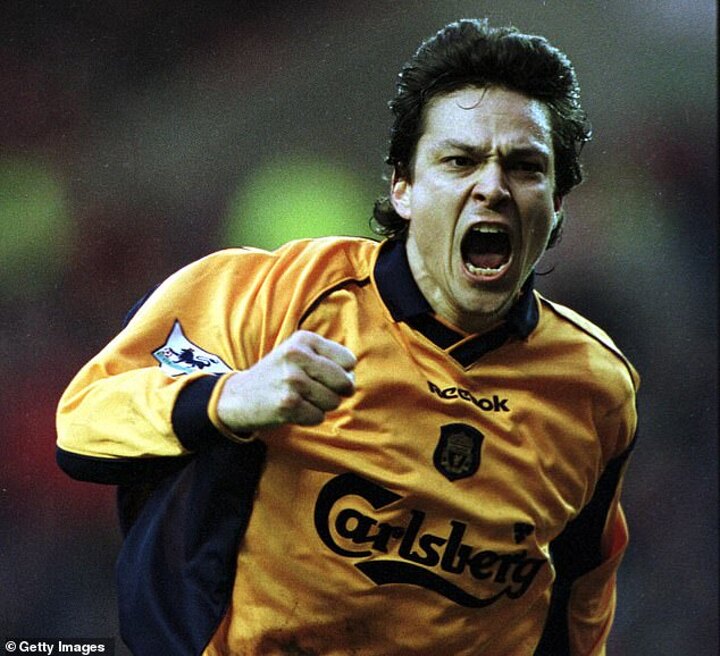 The sole signing of summer 2001 became a Kop hero for a string of spectacular goals early in his Anfield career, including a free-kick thunderbolt against Manchester United. Cemented his place on the left-hand side during his seven-year stay and started the Champions League final in 2005.

Plucked from obscurity and the relatively unknown Banik Ostrava, Baros became a European star when he won the Golden Boot at Euro 2004. Despite his early promise he failed to kick on, and Rafa Benitez discarded him shortly after the Champions League final in 2005. 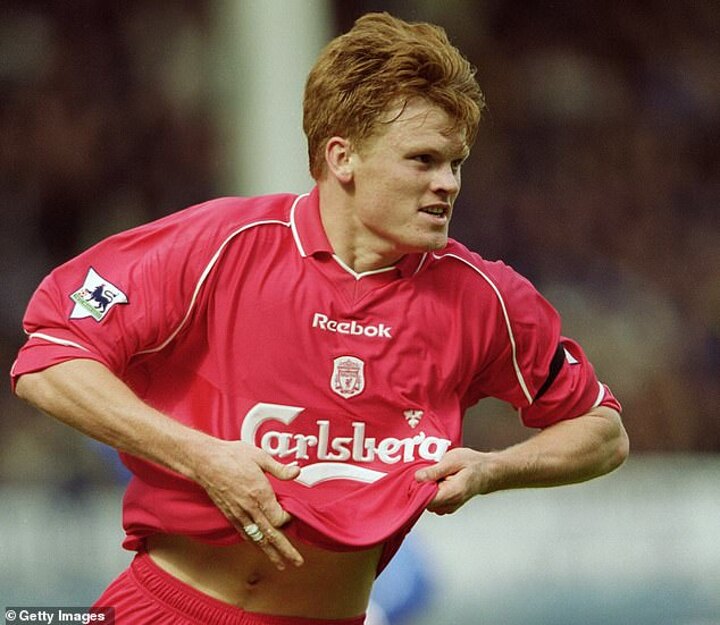 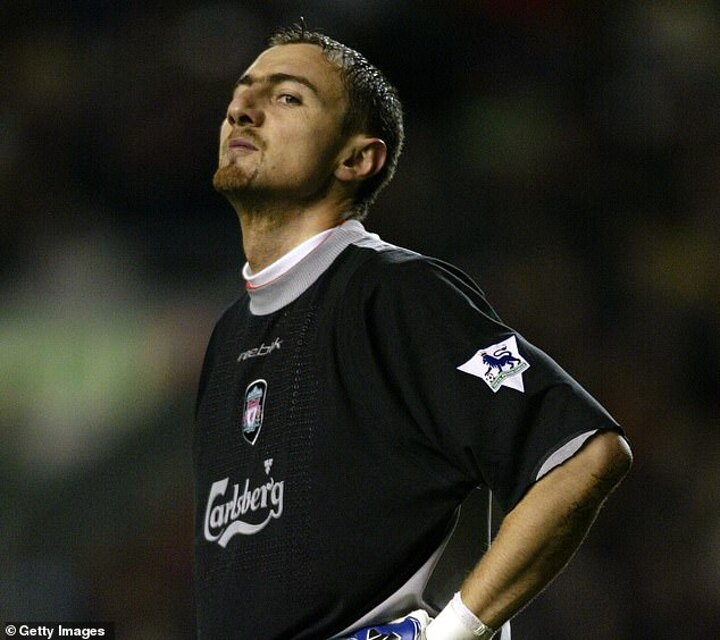 The England No 1 in-waiting when he arrived from Coventry in September 2001, Kirkland had to bide his time as understudy to Jerzy Dudek. He struggled with injuries and, in turn, form, failing to reach his potential in five years at Anfield.

An instant upgrade to Westerveld, Dudek's impressive reflexes quickly impressed on Merseyside but a series of high-profile errors in 2002-03 saw his confidence plummet. Returned to claim man of the match in the 2003 League Cup final and attained legendary status for his Champions League final heroics.

The great 'what if' in Liverpool history. 'Le Sulk' arrived on loan from PSG in December 2001 with a big reputation but desperate for redemption after his miserable time at Real Madrid. He scored only five times in 22 appearances, but despite showing flashes of his quality, Houllier decided the mercurial Frenchman was not worth the hassle. 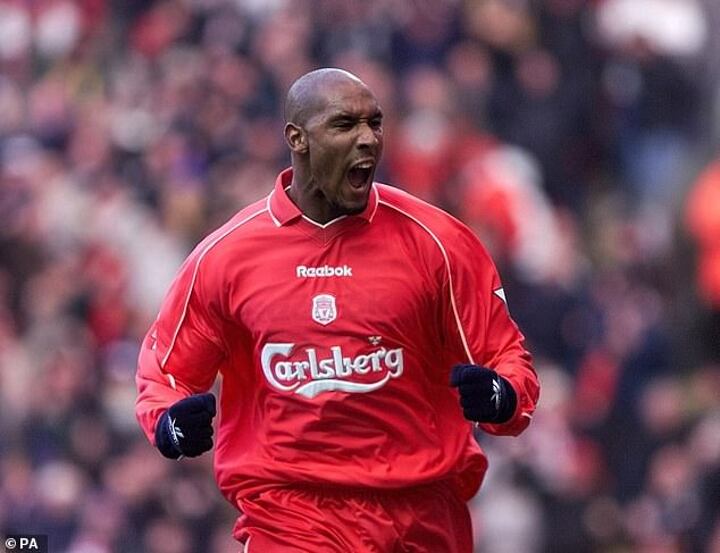 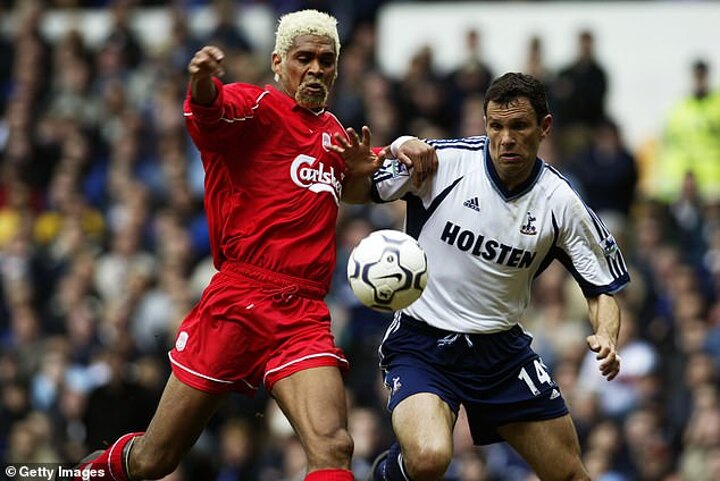 The last player to cross the Merseyside divide, much to the disappointment of Paul Gascoigne, and he scored on his debut in a 6-0 thrashing of Ipswich. Despite his colourful haircuts, he made little impression on the pitch making just 21 appearances in two years.

Houllier hailed Cheyrou as the 'New Zidane' in May 2002, and it all went rapidly downhill from there. The Frenchman never got to grips with the pace of English football despite a memorable month in January 2004 where he scored a winner at Stamford Bridge and a brace against Newcastle.

Instead of Anelka, Houllier sealed a big-money deal for the breakout star of the 2002 World Cup. But for all his electric displays in Senegal's unlikely run to the quarter-finals, Diouf spectacularly failed to live up to the price tag and his African Player of the Year accolade. Spitting at Celtic fans, the only No 9 in Liverpool history to go a season without a goal, and public spats with Steven Gerrard and Jamie Carragher have made him persona non grata at Anfield. 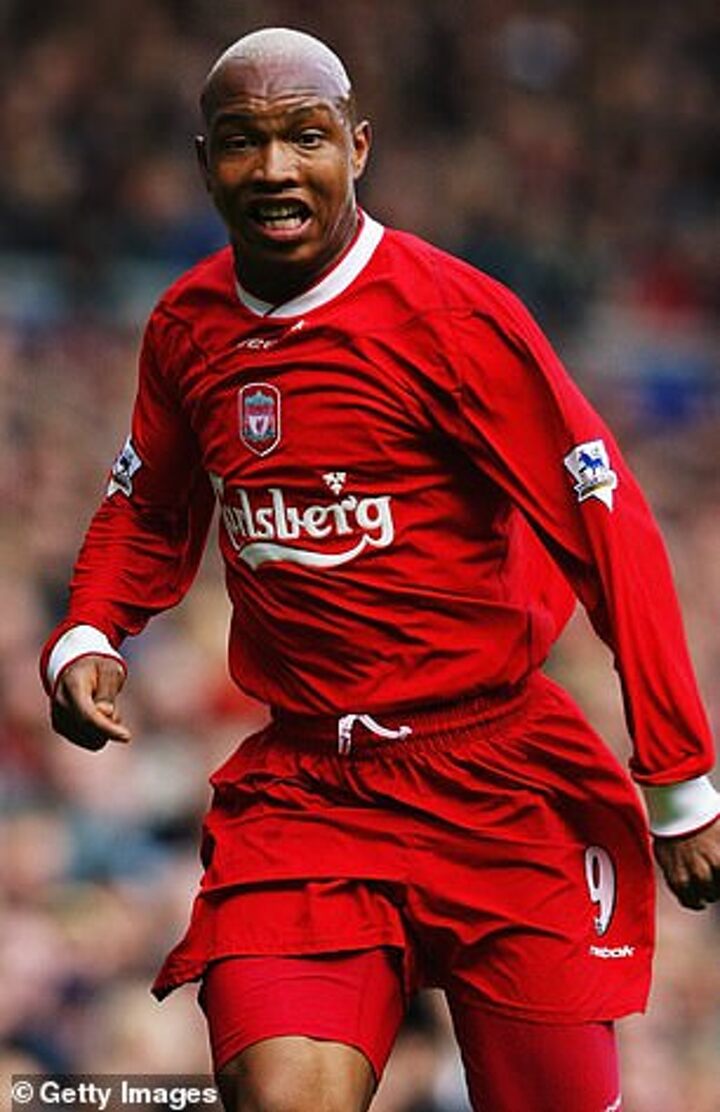 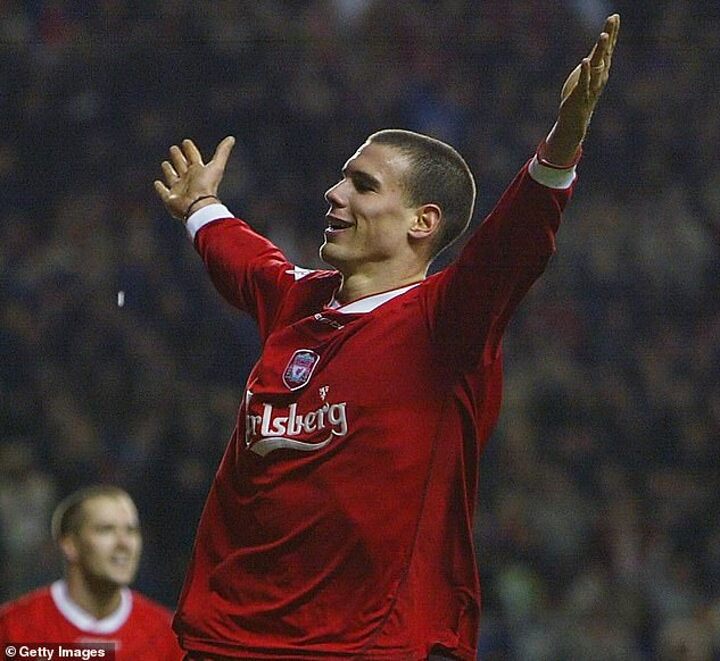 Another of Senegal's World Cup stars, he scored one of the goals of the tournament against Denmark. He never came close to matching those all-action displays in England. 'With Salif, I knew after a week of training that he wasn't going to be good enough', wrote Gerrard in his autobiography

A Bosman free signing from Ajaccio, goalkeeper Luzi made one appearance in three years, replacing an injured Dudek against Chelsea in January 2004. He kept a clean sheet, helping Liverpool finish in the top four and secure a Champions League return. 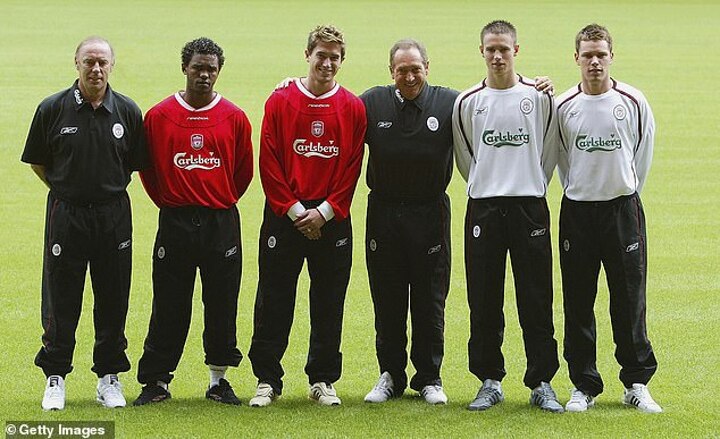 One of the stars of France's Under 17s World Cup winning side, hopes were high for Le Tallec, who liked to operate in an attacking role behind the strikers. He didn't live up to expectations, but played in both legs of Liverpool's Champions League quarter-final against Juventus in 2005.

Top scorer and player of the tournament in that France U 17 side, Sinama-Pongolle made more of an impression than his compatriot Le Tallec despite never reaching his potential. He scored nine times, including the equaliser against Olympiacos in 2004.

Finnan lived up to his understated arrival from Fulham in five years on Merseyside. His consistency at right-back became a key pillar of Rafa Benitez's side and he went on to make over 200 appearances for the club. 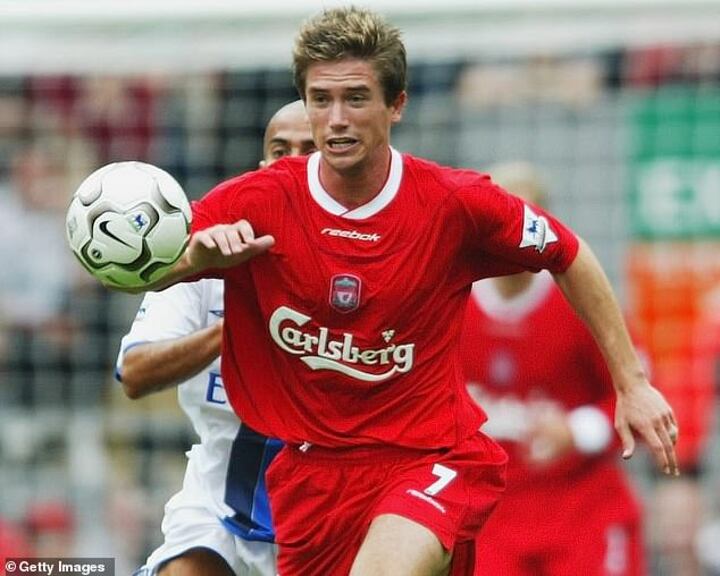 Liverpool beat Manchester United to one of the Premier League's leading lights in 2003 - and for a snip at a controversial £5m. But the Australian's best years were already behind him by this point, despite nine goals in his first three months. Injuries prevented him matching the heights of his Leeds years, despite a brief renaissance under Benitez in 2006, and he was booed from the pitch when injury forced him off in the first half in Istanbul.

Jones became the oldest Liverpool debutant at the age of 36 in January 2004 when he arrived as an emergency loan signing. He made just two appearances, including a clean sheet on debut against Aston Villa.

Houllier's parting gift never made a single appearance under the Frenchman. Cisse's arrival was confirmed despite the manager's sacking in May 2004, but the lightning-fast striker never matched the goalscoring prowess he showed in his home country. A horrific broken leg sustained just two months into his Liverpool career didn't help his cause, but he still played his part, scoring in the Champions League final shootout and in the FA Cup final in Cardiff a year later. 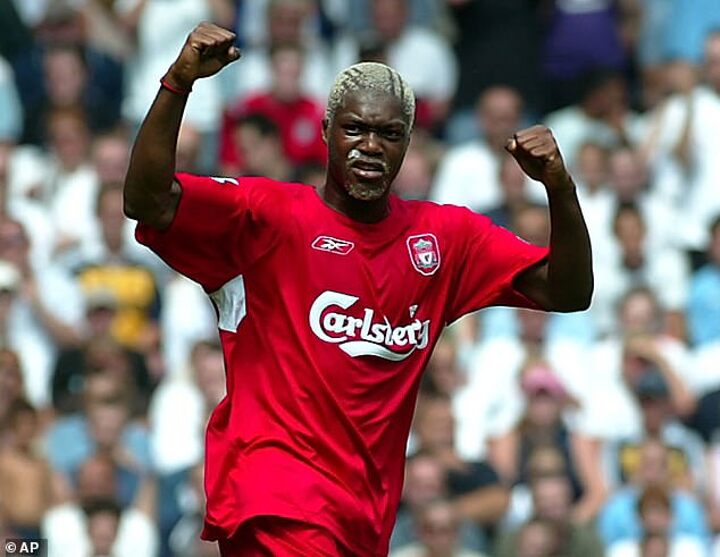