Liverpool's record league goalscorer and England's 1966 World Cup winner Roger Hunt will be laid to rest on Thursday when his funeral takes place on Merseyside. 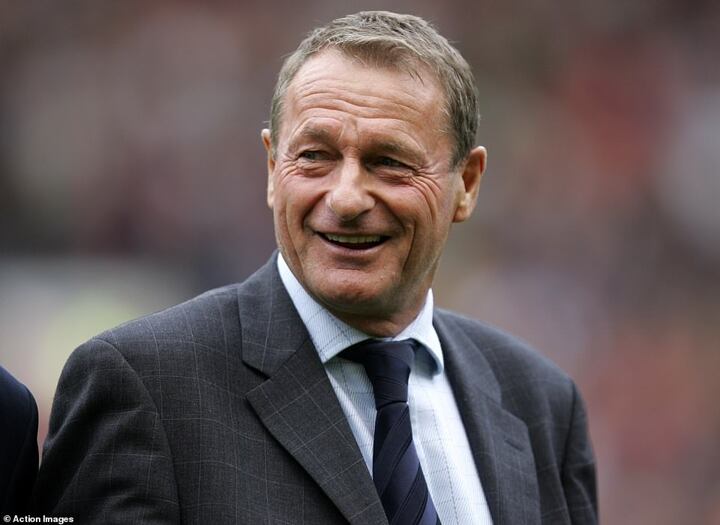 Hunt, who is the second-highest scorer in Liverpool club history with a staggering 285 goals, passed away peacefully at home at the age of 83 last month.

The service is due to start at 11am at Liverpool Cathedral and will be led by Canon Neal Barnes and supported by Reverend Bill Bygroves – the Liverpool Football Club chaplain – with emotional tributes to be paid by former players.

In a touching gesture, his hearse will momentarily pause outside Anfield - Liverpool's famous home stadium - at around 10:20am during its journey to the cathedral.

A larger number of Liverpool supporters are expected to attend the service with it open to the public as they pay their final respects to Hunt, who was affectionately known as 'Sir Roger' by Liverpool fans after he was overlooked for a knighthood.

Ian Callaghan, Kevin Keegan and Jimmy Tarbuck will all be paying tribute to Hunt during the service on Thursday morning and guests, including Professional Footballers' Association chief executive Gordon Taylor, were seen arriving at the cathedral.

Hunt is the sixth 1966 World Cup winner to pass away since May 2018 and his death leaves Bobby Charlton, Geoff Hurst and George Cohen as the only three surviving members from the team that started that final against West Germany.

Hunt, who was born in Glazebury in Lancashire in 1938, scored 285 goals in 492 matches for Liverpool, with his debut coming in September 1959.

He was a key man under the guidance of legendary Liverpool manager Bill Shankly, scoring 41 goals in 41 games in the side that won the second tier in 1961-62.

His partnership in attack with Ian St John, who passed away in March, is fondly remembered in Liverpool's glittering history. He also won the First Division title in 1964 and 1966 and the FA Cup with Liverpool in 1965.

Hunt's overall Liverpool scoring record was broken by Welshman Ian Rush in 1992 but no one has yet scored more league goals for the Merseyside club. 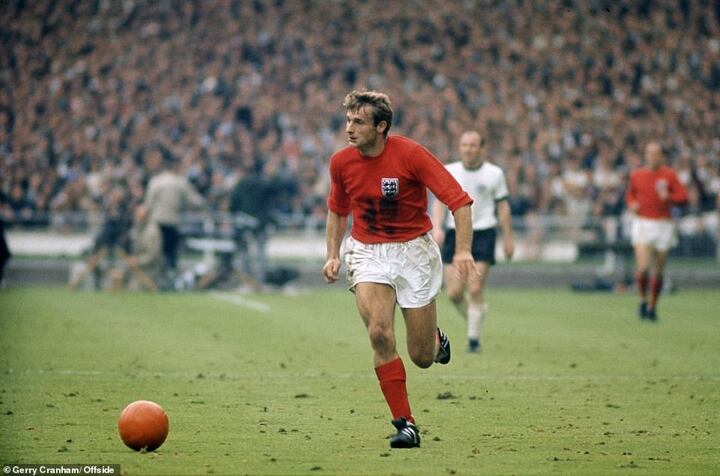 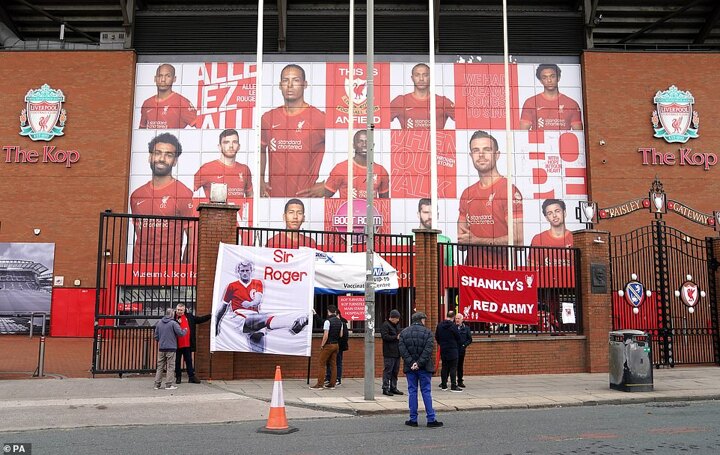 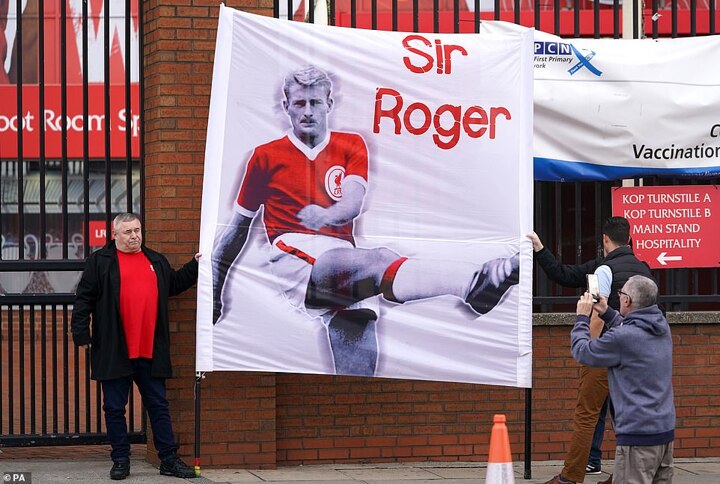 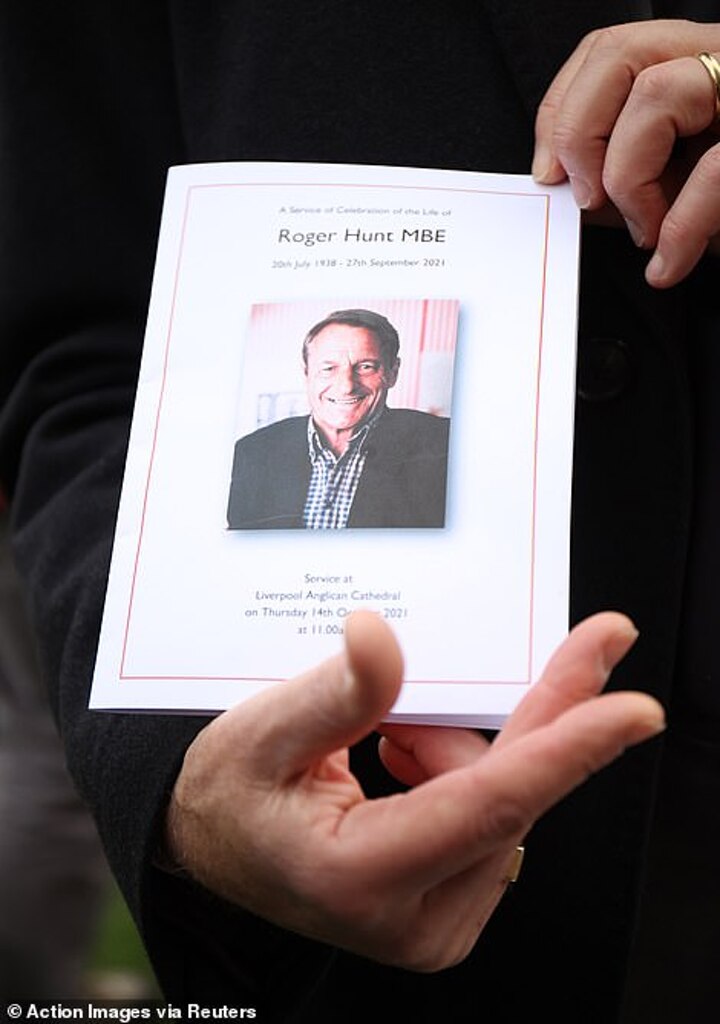 Hunt won 34 caps for England in his career, scoring 18 goals, and earned his first under Walter Winterbottom in 1962 when Liverpool were still in the second tier. In that season, he scored 41 goals in as many games for the Reds.

During the 1966 World Cup finals, Hunt scored three goals to help England get out of their group, and played in every game such was his importance to Sir Alf Ramsey's team.

Hunt also boasted the distinction of scoring the first goal ever shown on the BBC's Match of the Day highlights programme, a looping volley into the top corner during a 3-2 win over Arsenal on August 22, 1964.

After hanging up his boots, Hunt joined his family's haulage company, which was first established by Richard and Harry Hunt back in 1929. He also worked for the Pools Panel, helping to predict the results of football matches that were called off due to adverse weather.

Hunt did not work in football again, but was awarded an MBE in 2000 along with fellow '66 World Cup winners Alan Ball, Cohen, Nobby Stiles and Ray Wilson.

His exploits during his playing days also saw him inducted into the English Football Hall of Fame in 2006, while he was voted in at No 13 on Liverpool's '100 Players Who Shook The Kop Poll' in the same year.

He lived near Warrington with his wife Rowan, having previously been married to Patricia O'Brien, with whom he had two children. 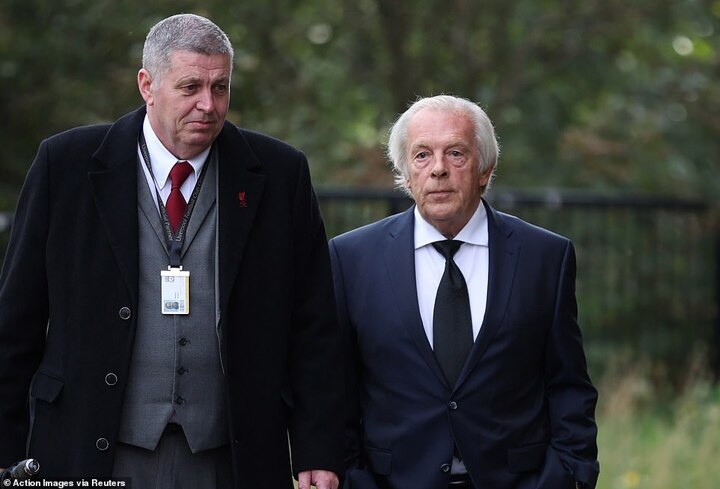 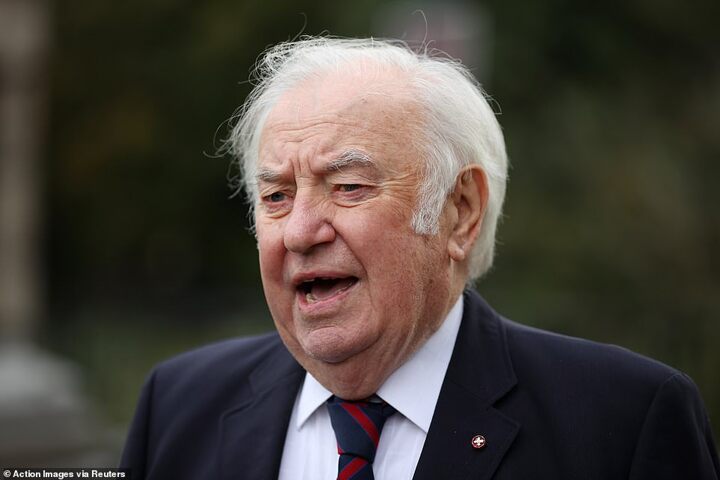 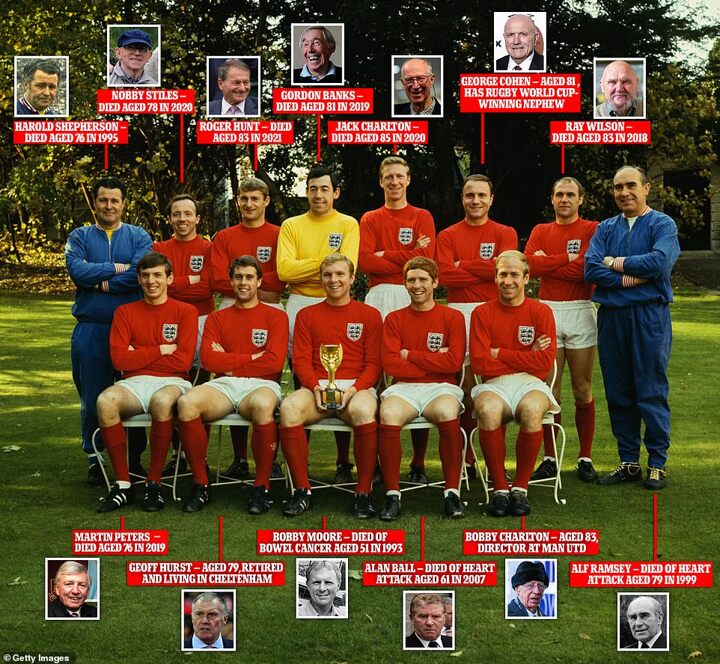 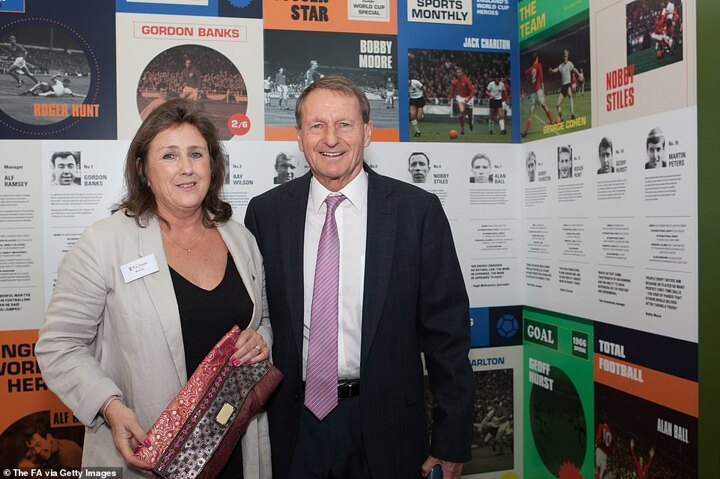 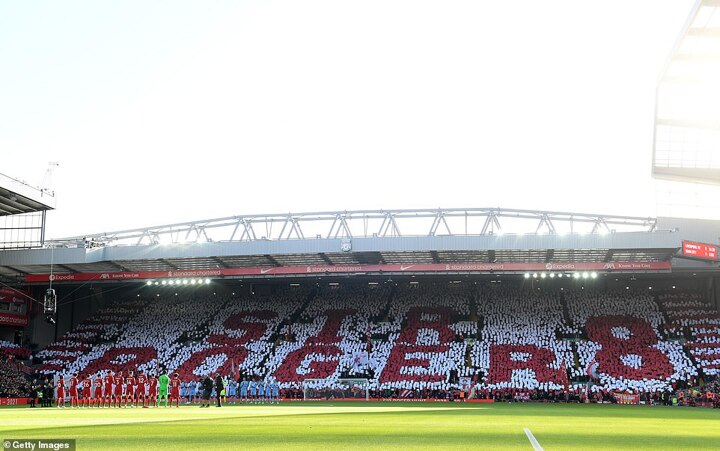 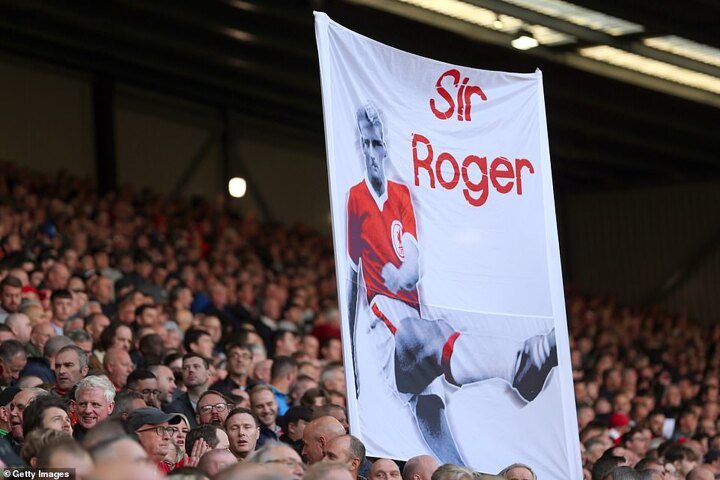 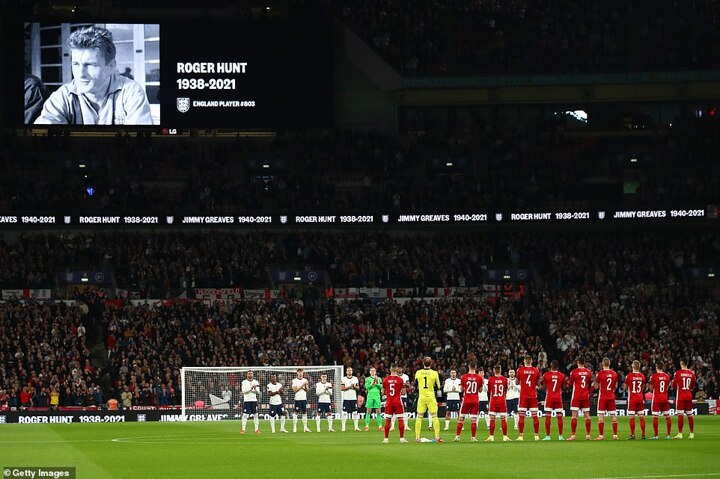 Upon news of his death, current Liverpool manager Jurgen Klopp said: 'It's really sad news and our thoughts and our love go to his family.

'Unfortunately, it feels too frequent in this moment we are saying farewell to these giants of our club.

'Roger Hunt comes second to no one in his importance in the history of Liverpool FC, that much is clear.

'To be the goalscoring catalyst of the Shankly team to actually achieve promotion and then go on to win those precious league titles and the FA Cup puts him in a bracket of LFC legends who are responsible for making us the club we are today. Not only that, he was also a World Cup winner in 1966, too.

'I am told the Kop christened him 'Sir Roger' for all his achievements. A goalscorer who never stopped working to help his team-mates; I believe he would have fit in well within our current team.

'So, it is Sir Roger we will remember, honour and pay tribute to over the coming days. You'll Never Walk Alone.'

Prior to kick off in Liverpool's Premier League match with Manchester City on October 3, Anfield paid tribute to one of its favourite sons with fans on The Kop coming together to form a mosaic that read 'Sir Roger 8'.

They also wore black armbands in tribute to Hunt during their Champions League victory over Portuguese side Porto - which took place on the same day as his death. There was also a minute's applause in memory of Hunt before England's draw with Hungary at Wembley on Tuesday night.

All our obituaries are coming too late to let Roger Hunt know the professional esteem, the human respect, the unqualified admiration and the warmth of affection in which he was held.

It wasn't deliberate but in almost all those misty-eyed retrospectives written or broadcast about England's solitary World Cup glory of '66, Hunt was overshadowed by the majesty of Bobby Moore, the genius of Bobby Charlton, the miracles of Gordon Banks, the over-drive of Alan Ball, the deterrent called Nobby Stiles, that unique hat-trick by Geoff Hurst, even the ghostliness of Martin Peters. 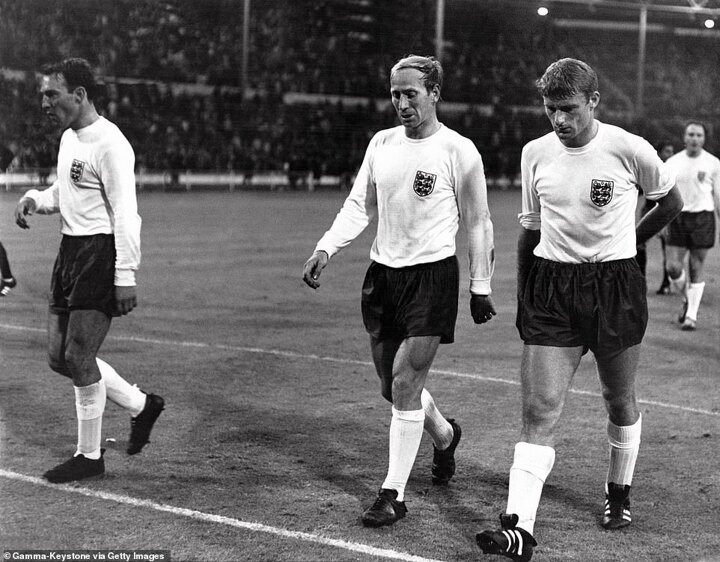 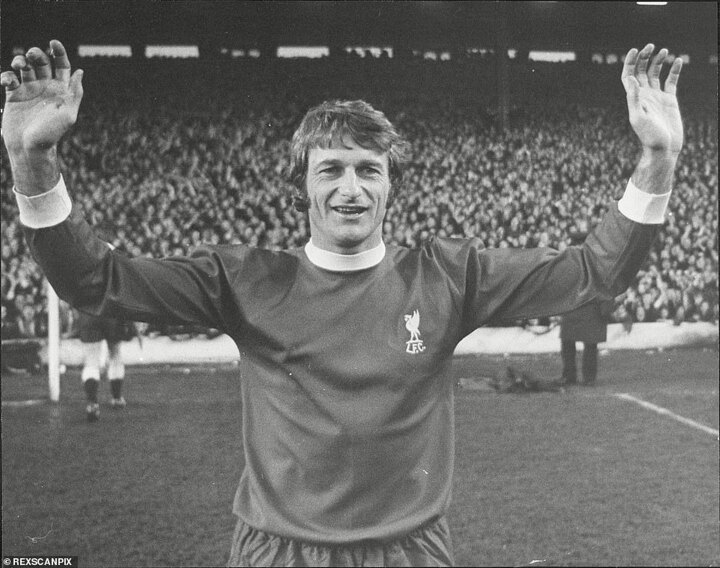 Only occasionally was anything approaching justice done to the relentless foraging, striker's intelligence, Lancastrian courage and industrial revolutionary power with which Hunt opened up so many of England's avenues to success.

Too often he was casually, idly, wrongly damned by faint praise as the work-horse.

Not by Hurst, who never fails to credit his partner up front for his contribution to the making those three unique World Cup Final goals.

Not by Liverpool supporters, by whom he remains so beloved that the official website still insists on calling him Sir Roger at every opportunity. Although, like Moore, he was never knighted. 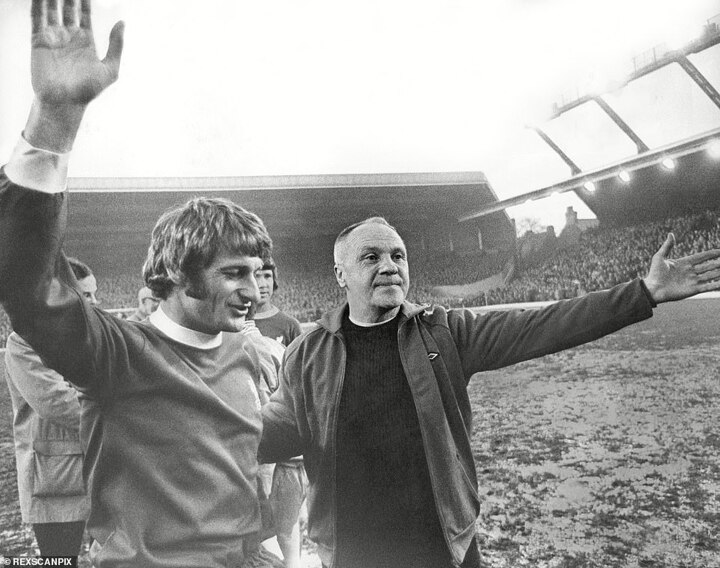 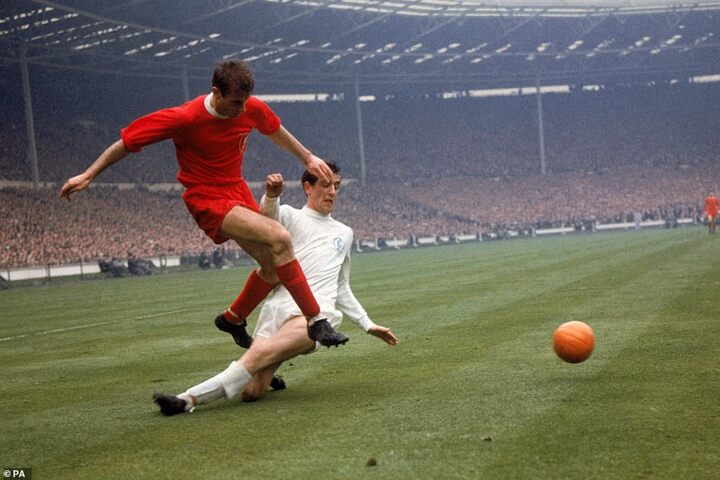 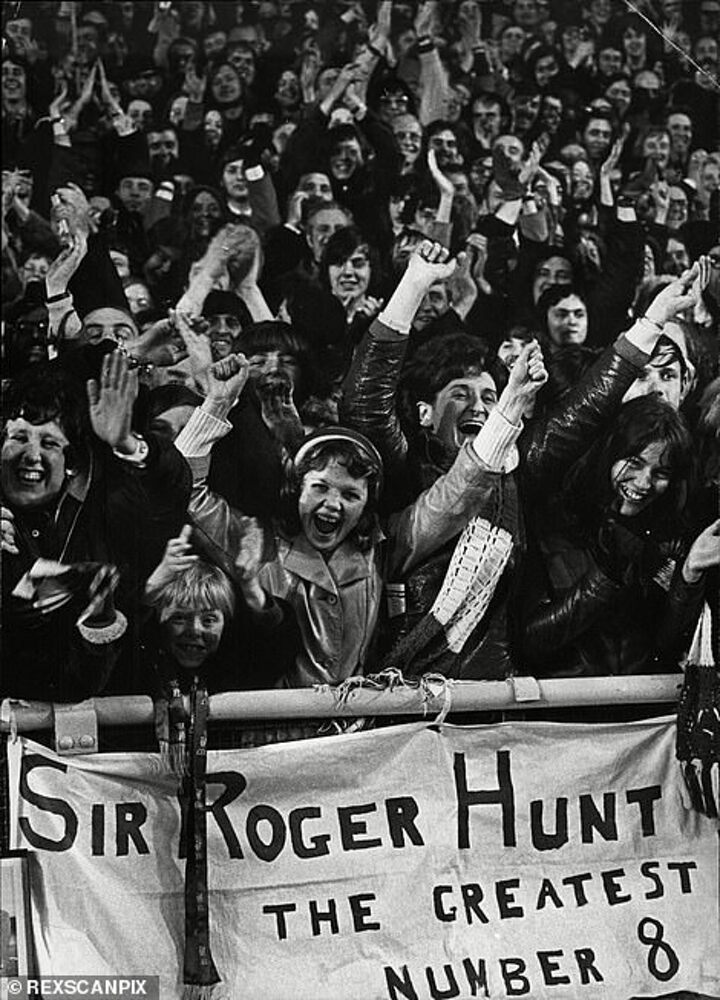 No-one at Anfield ever forgets that his 244 goals in 404 league appearances had much to do with raising them from the muddy trough of the old second division, to two English championships and their first FA Cup for umpteen years.

That tally remained the Liverpool scoring record until Ian Rush came along. Even then Hunt stayed ahead of the Welsh wizard on Football League goals.

But how many football fans beyond Merseyside can honestly say they remember how many Hunt scored in that halcyon World Cup tournament?

As many, as it happens, as Hurst in the Final itself. One in the 2-0 win against Mexico. Both in the victory over France by the same margin.

Even then not much fuss was made about, or by, the scorer.

But the ultimate compliment, the one which really mattered, was paid by England's eventually knighted manager. Quietly, of course. In this case in private.

Alf Ramsey simply made it clear that if Jimmy Greaves recovered from injury then the choice for second centre-forward would be between him and Hurst.

That whichever of those two got that tricky nod would be playing in the Final alongside Hunt the reliable, who had played every minute from the first kick of the opening match. 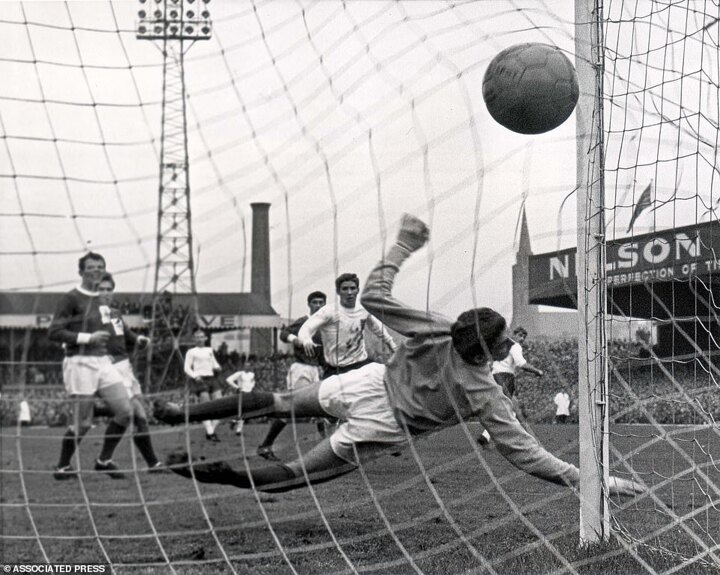 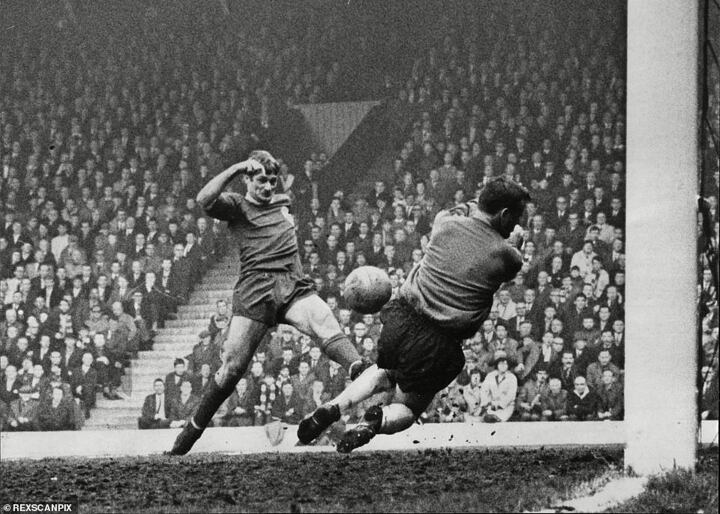 So yes, quietly, gentleman Roger went about his vital business. With so little commotion that he was disgracefully over-looked in the first raft of honours by the Queen.

He had to wait until the belated second draft of MBEs made up mostly of non-playing members of the squad.

If he felt slighted, it never showed. Hunt was dignified by his humility. There was no ego, precious little partying. Shy if anything, so not that easy to get to know well.

In character with the modest persona of a sensible man who did not even seem aware of how handsome he was.

But there was a discreet charm and unfailing courtesy. As the years went by he and I really only bumped into each other at the funerals of his fallen England and Liverpool comrades. We would shake hands, share a few reminiscences and wish each other well.

And now he leaves but three of his World Cup XI team-mates still standing. Hurst, Bobby Charlton and George Cohen. Tragically, this cull of heroes seems to be quickening, accelerated in some cases by the onset of dementia.

But although Hunt could head a ball with the best of them, that does not appear to be a factor in this sad instance.

As he reaches football's elysian fields he will no doubt be greeted by the rasping tones of the other great manager who held Hunt indispensable.

When Bill Shankly first took charge at Liverpool he cleared out almost an entire stock of players. But not, as he put it, 'our Roger.'

Now the time has come not only to say our goodbyes but to apologise. So sorry, Sir Roger, that we left it too late to put your greatness on record in time for you to read.