There cannot be many players to have made the jump from the lower leagues of Norwegian football to the bright lights of the Premier League, but that could soon be the path taken by George Lewis. 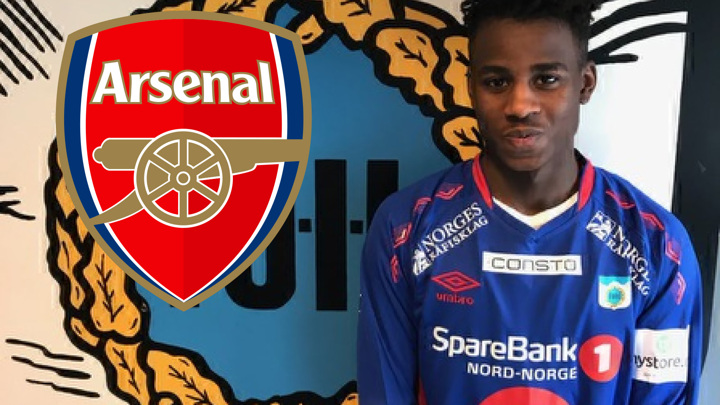 The 19-year-old winger, who has never played internationally at youth level and has spent the past few years with third tier sides Tromsdalen and Fram Larvik in Norway, is nearing a shock move to Arsenal.

As revealed by Goal, talks are continuing over a deal after Lewis, who turns 20 in June, impressed during a two-week trial with the north London giants earlier in the year.

It is a potential transfer that has captured the imagination of many and has certainly caused quite a stir back in Norway, where the young attacker had never really looked like making a breakthrough.

“It’s been in the news over here about Arsenal but no-one really gave it much attention at first,” Jonathan Hill, the coach who gave the teenager his first professional contract at Tromsdalen, tells Goal.

“I’m delighted for George, but I’m also a little surprised. He’s nearly 20 and never been near the national teams and it’s not like he’s gone off the radar here during his development.

“So it has come as a surprise, but hopefully he can do well over there if it happens.”

Lewis, who was born in Kigali, Rwanda, moved to Norway as a child and began attempting to make his way in the game.

He started his career in the youth ranks of Norwegian club Tromso IL before moving to second tier side Tromsdalen - where he turned professional under the guidance of Hill, who has worked as a youth coach at Manchester United, Manchester City and as assistant head coach at Fulham as well as having a spell on Sheffield Wednesday’s sporting director committee in 2015.

“George was probably 14 or 15 when I first saw him, he was training over here,” says Hill. “He was at Tromsdalen, the club I’m head coach of now and then left to join TIL when I went to Sheffield Wednesday.

“George was a professional here, I gave him the contract because he was a player with real potential and then he decided, against my advice, to leave and he’s been looking at other football opportunities for the past months.

“He’s got some really outstanding qualities, but he’s also raw. If this happens, it’s brilliant because he does have some talent.”

Hill adds: “I’m a little shocked but can understand why George would impress coaches at Arsenal’s level.

“Why I’m surprised is that you have to look at why he’s not made it in Norway, which is the 26th ranked country in Europe and no-one else has taken him apart from me - who saw something in him.”

Despite his lack of experience at anything like the top level, Arsenal invited Lewis over to north London for a trial in March, which was initially meant to last a week.

But he impressed so much that the trial was extended so the coaching staff could have a closer look at him.

His pace was a particular draw, as was his ability to beat a defender and his versatility - so much so that a permanent deal is now close. When finialised, the young Norwegian will link up with Steve Bould's Under-23s set-up rather than Mikel Arteta's first-team.

Lewis is right-footed and his favoured position is on the right side of the attack, but he can play across the frontline and is comfortable coming inside off the left wing.

“He’s very quick and direct,” explains Hill. “He likes a stepover and has a range of tricks. He can beat a player - whether he can beat a Premier League full-back though is a different thing.

“He would have played in my first-team, but he probably wouldn’t have been a regular. But that is normal for such a young player. He would have been more of an impact player as that’s what he can give.

“I gave him his professional contract so I thought he had something because he’s got good pace, but he needs to improve his decision making and I’m sure that will improve working with players of Arsenal’s standard.

“I really wish him well. He’s a really nice guy and this could be the thing that gets him going.”