There are the biggest bust-ups between players and managers, including Fergie, Beckham, Shearer, Keane and Mourinho. 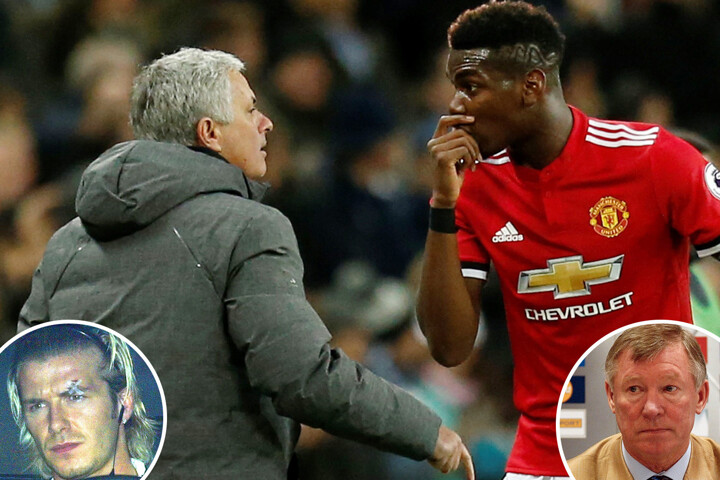 Romelu Lukaku's fate at Manchester United was reportedly sealed when he fell out with assistant manager Mike Phelan.

While David Luiz was accused of thinking he was bigger than Chelsea by Andreas Christensen after sealing his move to Arsenal in a sensational £8m deal, which the Blues later denied.

It shows that players often fall out with their clubs, managers and teammates in the high-pressure of professional football.

We present seven of the best... kicking off with a Man Utd legend. 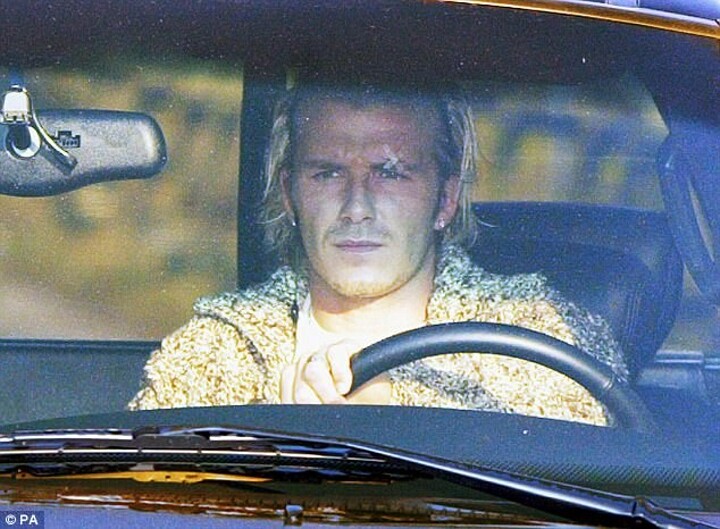 Paul Ince, Roy Keane, and Jaap Stam were all first teamers who upset the hard-nosed Scot and found themselves heading for the exit door.

However, Fergie's most high-profile bust-up with one his stars came in the shape of poster-boy David Beckham.

As he revealed in his autobiography, the Red Devils legend was furious at his side's FA Cup exit to Arsenal in 2003, signalling Becks out for his poor performance in the dressing room.

He claimed he had noticed the England legend's energy levels weren't what they were and told him in no uncertain terms his mind wasn't on the game.

The pair had a row and Fergie kicked a boot that slapped Becks in the face and cut his eye.

Less than half a year later, Beckham was headed to Real Madrid after Fergie washed his hands with him.

In truth, Keane could have an argument with his kitchen sink.

But in the build-up to the 2002 World Cup, Keane voiced his issues with Republic of Ireland being based in Saipan, including the training pitch and travel arrangements in an explosive interview with the Irish Times.

Mick McCarthy blasted Keane for his behaviour, so the fiery midfielder unleashed his own form of hell.

“The only reason I have any dealings with you is that somehow you are the manager of my country. You can stick it up your b*******.”

Keane was sent home from the World Cup in disgrace, chased by reporters who wanted quotes as he walked his dogs. 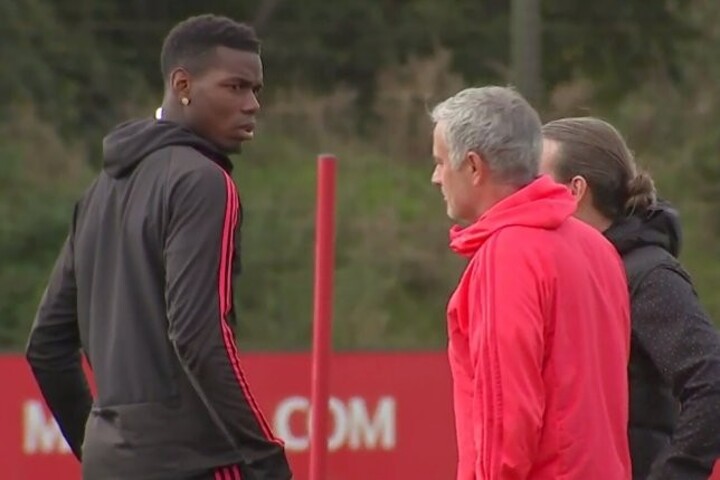 And French World Cup winner Paul Pogba and 'The Special One' Jose Mourinho were two egos ready to butt heads.

Their frosty relationship came to a head when Pogba questioned the Portuguese's tactics and was stripped of United's vice-captaincy in a draw against Wolves.

"I think teams are scared when they see Man United attacking and attacking. That was our mistake.

"Maybe the attitude should be better and we should play better because, again, we are at Old Trafford and we should just attack and press like we did against Tottenham, Liverpool, Chelsea and Arsenal last season.

"When we play like this it's easier for us."

Mourinho was the fall guy, and Pogba is still at Old Trafford. 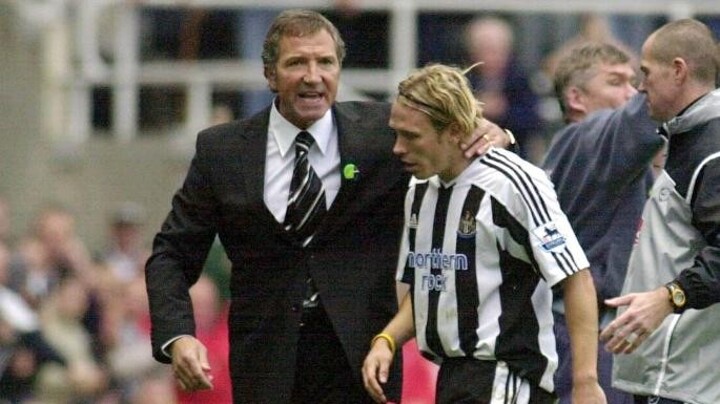 When the fiery pair were at Newcastle, they didn't always see eye-to-eye.

And after Bellamy was substituted in a game against Charlton, he swore at his boss before leaving the pitch.

Souness revealed in his autobiography: “At our next team meeting, he was sitting in the front row and, as I was talking, he kept shaking his head. 'What is it that you are not agreeing with?' I said.

“Before he could answer me, I added: 'Can we just go back over the past seven days of your life? You have told John Toshack he's not getting the best from you with Wales, because he's not using you in the correct position.

You have told our chairman that St James' Park doesn't suit Craig Bellamy and then, on Saturday, you called me a f***ing p**ck.'

“That's when I physically got hold of him and asked him to come into the gym with me. I walked out of that meeting and thought: 'What am I doing? Is this the job for me?'”

Just a few months later, following an incident where Bellamy feigned injury not to play a game on the wing, the Welshman was sold. 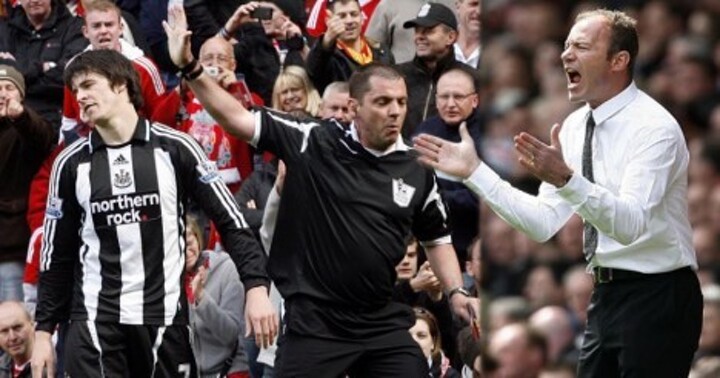 When Alan Shearer was tasked with trying to keep Newcastle United up with eight games to go in 2009, he had to manage the unmanageable Joey Barton.

Shearer recalled a conversation he had with Barton prior to a trip to Anfield, where the hot-headed midfielder would get stick. His player assured him he'd be able to handle it.

But... “We were getting beat 3-0 and we were just about to take him off and he scythes Xabi Alonso down just in front of the Kop. Straight red card, suspended for the rest of the season," Shearer recalled.

“He let me down, he let the club down, and then I just thought it was my time to say a few home truths in the dressing room.”

Barton was duly suspended for the last three matches, the Geordies were relegated and it was Shearer who lost his job.

Remarkably, Barton stayed to play in the Championship. 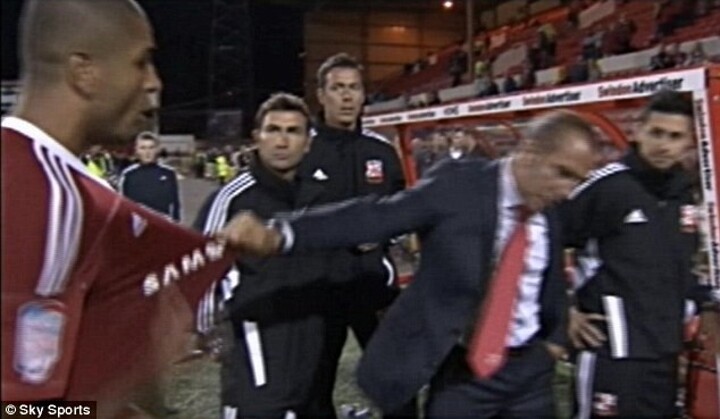 Not the most high-profile, but explosive all the same.

Di Canio was always going to struggle keeping his emotions in check as a football manager.

But just a month into his stint at Swindon Town an argument after a League Cup clash with Southampton with Leon Clarke was caught on camera.

The Italian grabbed at his striker's shirt as he walked off the pitch, and as the two made their way down the tunnel they got into a tussle.

Clarke never played for Swindon after that and was sent on loan to Chesterfield just a week later.