Liverpool defender Joel Matip has heaped praise on Reds team-mate James Milner for his work ethic and effort in training. 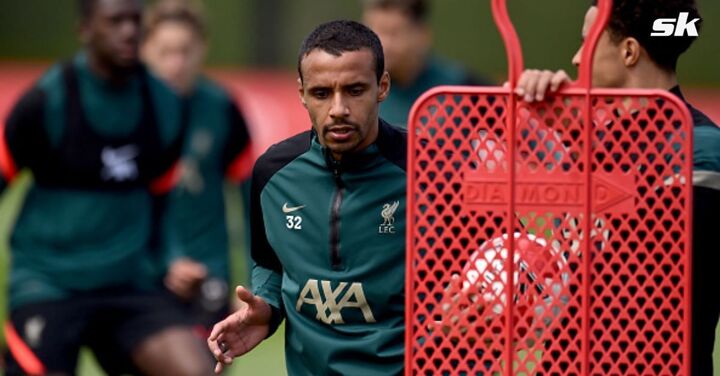 The Reds signed Milner on a free transfer from Manchester City in the summer of 2015. Despite joining the Anfield outfit free of cost, the midfielder has proved to be a valuable asset to the team over the last seven years.

Milner has made 286 appearances across all competitions for Liverpool so far, scoring 26 goals and providing 44 assists in the process. However, the Englishman has seen his playing time in the team reduce significantly recently.

There are also serious doubts about the 36-year-old's future at Anfield as his contract expires in the summer. However, Milner has continued to be a model professional in Jurgen Klopp's camp despite nearing the end of his deal and being on the wrong side of his 30s.

Expressing his admiration for Milner's work ethic, Matip explained that the midfielder is an 'idol' for everyone in the Reds squad. Asked to name the hardest training in the team, the Cameroonian said on the FA Cup's YouTube channel:

"I think Millie [Milner], he's always there and absolutely ready, doesn't matter which session [it is]. He is an idol for everyone there [in the team]."

Matip is also of the view that Milner, along with Jordan Henderson, is the likeliest to become a manager among his Reds team-mates. He said:

"I'm not sure if they really agree with my, but from my point of view, I think it would be Hendo [Henderson] or Millie."

Having turned 36 years old in January, Milner is likely to have started thinking about calling it quits on his playing career. It remains to be seen if the former Manchester City star has plans to try his hand at management.

Could Milner extend his stay at Liverpool?

Milner has played 36 matches across all competitions for the Reds this season. However, it is worth noting that he is behind Fabinho, Henderson, Naby Keita and Thiago Alcantara in the pecking order.

The rise of Curtis Jones and Harvey Elliott, coupled with Fabio Carvalho's imminent arrival, could see Milner's playing time reduced further. The midfielder, though, is still a great personality to have in the dressing room and the Reds could thus be tempted to hand him a new deal.

According to The Daily Telegraph, 'it seems certain' that Milner will put pen to paper on a fresh contract with Liverpool.