Real Madrid right-back Dani Carvajal has backed Karim Benzema to win the 2022 Ballon d'Or, claiming that all the other contenders are “far from him.” 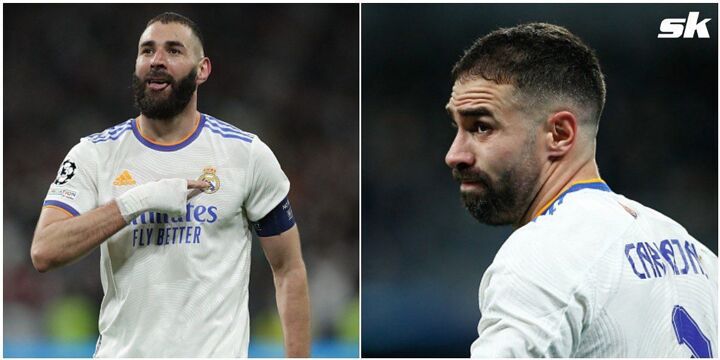 Los Blancos' Champions League triumph was even more heroic, with them pulling off three consecutive knock-out stage comebacks on their way to lifting the trophy. They beat Paris Saint-Germain, Chelsea and Manchester City in the knock-out rounds before getting the better of Liverpool in the final.

Benzema was the team's undisputed superstar, popping up with important goals at times of need. Unsurprisingly, the Frenchman's exploits have left everyone spellbound, with teammate Carvajal claiming that Benzema is an unchallenged favorite for the 2022 Ballon d'Or.

When asked whether anyone could beat Benzema in the Ballon d'Or race this year, Carvajal told AS:

“Nobody, any other candidate is far from him. Not only what he has helped us achieve, which has been a very important part. A high percentage has been the one that has led us to success: the goals he has scored, the assists he gave... Whoever has seen Karim has no doubt that the Ballon d'Or is his.”

Having scored 27 goals in 32 appearances, Karim Benzema won La Liga’s top-scorer award in the 2021-22 campaign, becoming the first Real Madrid player to win it since 2015.

We, however, believe that the French Football magazine might not even need to take his domestic exploits into account to hand him the Golden Ball. Benzema’s dream run in the Champions League alone could secure it.

In the 2021-22 season, Benzema scored 10 goals and provided an assist in the knockouts. He scored a hat-trick against PSG in the Round of 16 second leg, sealing a 3-2 comeback win for Madrid.

Against Chelsea, he scored four goals over two legs (a hat-trick in the first leg), helping the Whites to a 5-4 aggregate comeback win.

He then scored a brace in the first leg against Manchester City before bagging another in the second to secure a 6-5 aggregate win.

The Real Madrid No. 9 ended the 2021-22 Champions League campaign as the tournament's leading scorer with 15 goals. He has 17 knockout goals to his name since the 2017-18 season, more than any other player in that time frame.

Also Read: "He likes to be the centre of attention" - Inter Milan star says Zlatan Ibrahimovic doesn't act his age in astonishing rant