The radio station RAC1 says Barcelona chief Josep Maria Bartomeu spoke to Quique Setién at the coach's home in the wake of the draw with Celta Vigo. 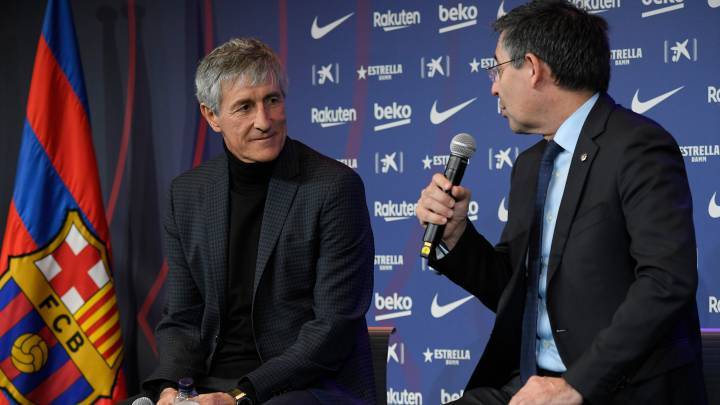 Setién sits down with Bartomeu and other Barcelona directors

According to the programme 'Tu Diràs', Bartomeu met Setién at the head coach’s home on Monday, together with club directors Éric Abidal, Javier Bordas and Óscar Grau.

RAC1 says Bartomeu sought to express his support for Setién, but it is thought likely that the Barça chief was also keen to learn more about the tense meeting he held with the Blaugrana players on Sunday, in the wake of apparent friction between team and coaching staff in the 1-1 draw at Balaídos.

Messi appears to brush off Barcelona assistant in Celta draw

Television images during a cooling break in Vigo appeared to show Lionel Messi disregarding Barça assistant Éder Sarabia’s attempts to issue him instructions, with Ivan Rakitic and Luis Suárez also at the centre of similar incidents, and heated words were allegedly exchanged in the dressing room.

Speaking post-match, meanwhile, Suárez seemed to point the finger at Setién and his backroom when asked to explain Barça’s poor away form, saying: “You’ll have to ask the coaches”.

Setién’s talks with the players are believed to have been conducted in a conciliatory spirit, but relations between the dressing room and Barcelona’s coaches appear strained ahead of a week in which the Catalans take on Atlético Madrid on Tuesday and Villarreal on Sunday in crunch LaLiga fixtures.

Barcelona players said to be unimpressed with Sarabia approach

According to the radio station Cadena SER, the Barça players are not happy with the coaching methods employed by Sarabia, who has garnered attention for his explosive touchline presence since moving to the Camp Nou with Setién.

In March, the 39-year-old could be seen berating his players during a 2-0 Clásico defeat to Real Madrid, apparently leading Setién to urge him to dial down his volatile approach, amid concern that it was not being well received by the Barcelona players.

Speaking ahead of Barça’s match against Atlético, Setién played down talk of tension between Sarabia and Messi, however, telling reporters: "In reality it is true that there are always controversies, as in life, and it is normal that there are differences. But this has always happened. I was not an easy player either […]. I understand it as something natural. There is good communication. I don't give it any importance."

Barça go into the clash with Atlético two points behind LaLiga leaders Real Madrid, who moved clear at the top of LaLiga with a 1-0 win at Espanyol on Sunday.