Sam Kerr and girlfriend Kristie Mewis take football so seriously, they'd 'kill each other' on the field.

The Chelsea and Matildas superstar, 29, and Mewis, 31, who plays for the USA's national team, have been in a relationship for almost two years

They've never been shy of sharing of the obvious love and complete adoration they have for one another publicly - but that doesn't mean they aren't acutely aware of how their relationship may look to some coaches, players and fans.

Kerr said while she knows 'the fans support us', both she and Mewis hope every level of the game understands that when it comes to football, there's no love lost between the pair.

'What I worry about most out of anything is that our coaches or teammates don't think that we can separate the two. I hope people know that when it's training time or play time, it doesn't come into it,' she said in an interview with English magazine Gaffer.

'I remember one time in Newcastle (Australia) she came on, we were playing against each other, and we went in on each other. We'd kill each other. But I worry that people think that we're not serious about our careers.'

Female football players have faced horrific and grossly stereotypical comments on their sexuality for decades.

A lot of women play with and against their partners, and have done so for many years; with no hint of not giving it their all for their coaches, teammates and fans.

The fact Kerr felt the need to address and highlight they fact with hyperbole like 'we'd kill each other' on the the field speaks to that.

If you've ever seen the combative and ridiculously skilled Kerr - who made her international debut at the tender age of 15 - play, you'd know she could never compromise her level of effort on the field.

And when Kerr and Mewis first met - on a football field, of course - they weren't 'killing each other', but it wasn't exactly an affectionate welcome from the Aussie. 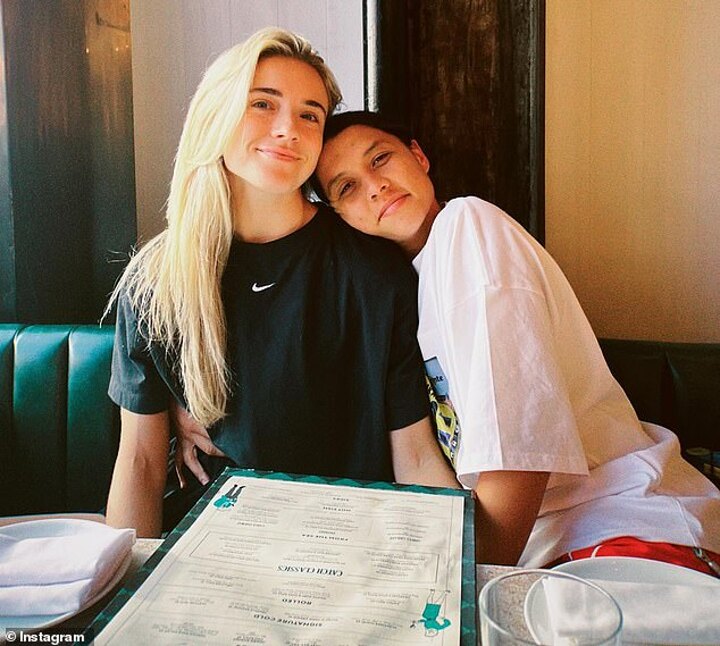 'We did play a match against each other but I thought her team was crazy. When I play I'm such a s**t stirrer and she (Mewis) was getting so angry,' Kerr said.

'We always talked about this one time where she tried to get the ball, it was a free kick for her team. She put the ball down and I kicked it away and was like, really? We didn't know we didn't know each other apart from that.' 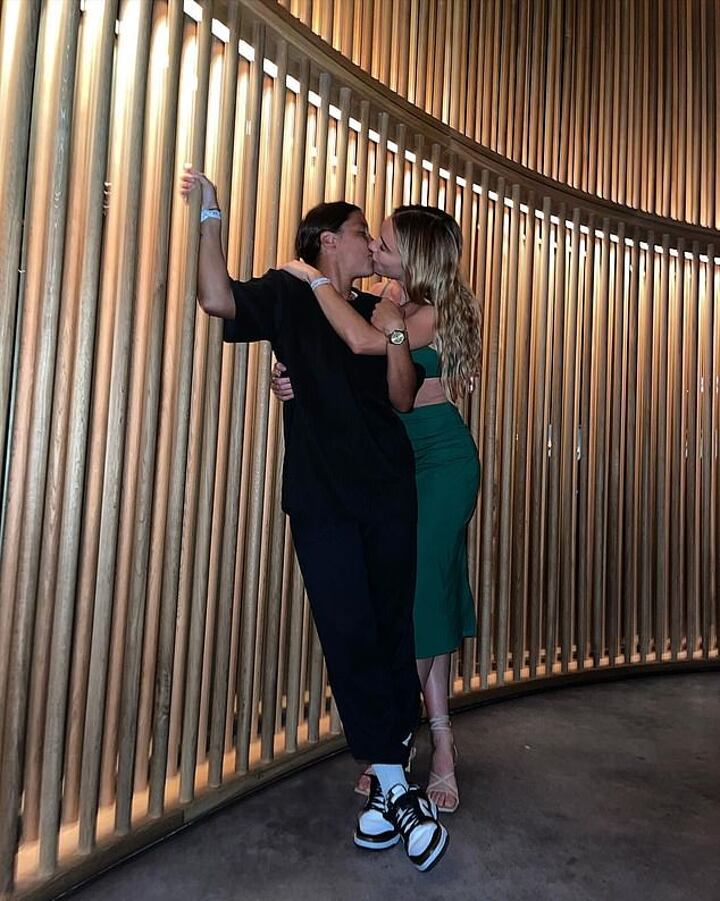 Thanks to the wonders of direct messages on Instagram, the pair then forged a relationship online before meeting in person three months later and going straight into two weeks of Covid quarantine together.

The relationship, which began well after Kerr's romance with former teammate and American club star Nikki Stanton fizzled out, stayed out of the public eye for awhile.

But then came the moment Kerr and Mewis rocketed into the public consciousness.

Kerr and the Aussies, who were vying for a bronze medal against Mewis' USA side at the Tokyo Olympics, were left devastated after a thoroughly entertaining, albeit heartbreaking, 4-3 loss.

After the game, the dejected Aussie captain sat in disbelief on the Kashima Stadium pitch.

Then out walked Mewis to comfort her devastated girlfriend, and announce to the world that they were an item. 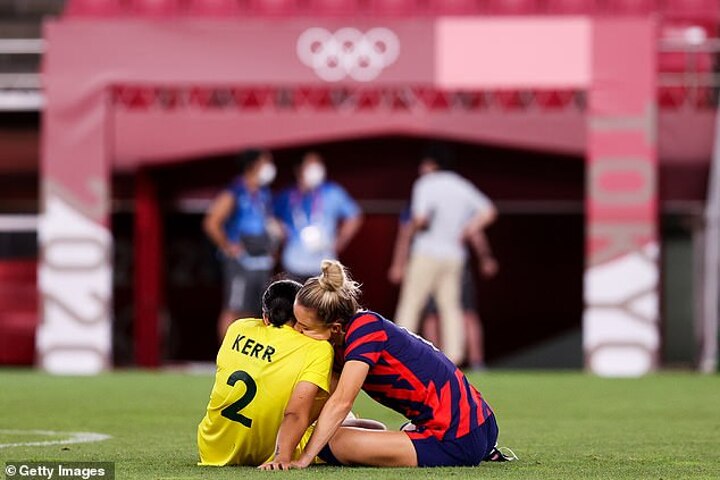 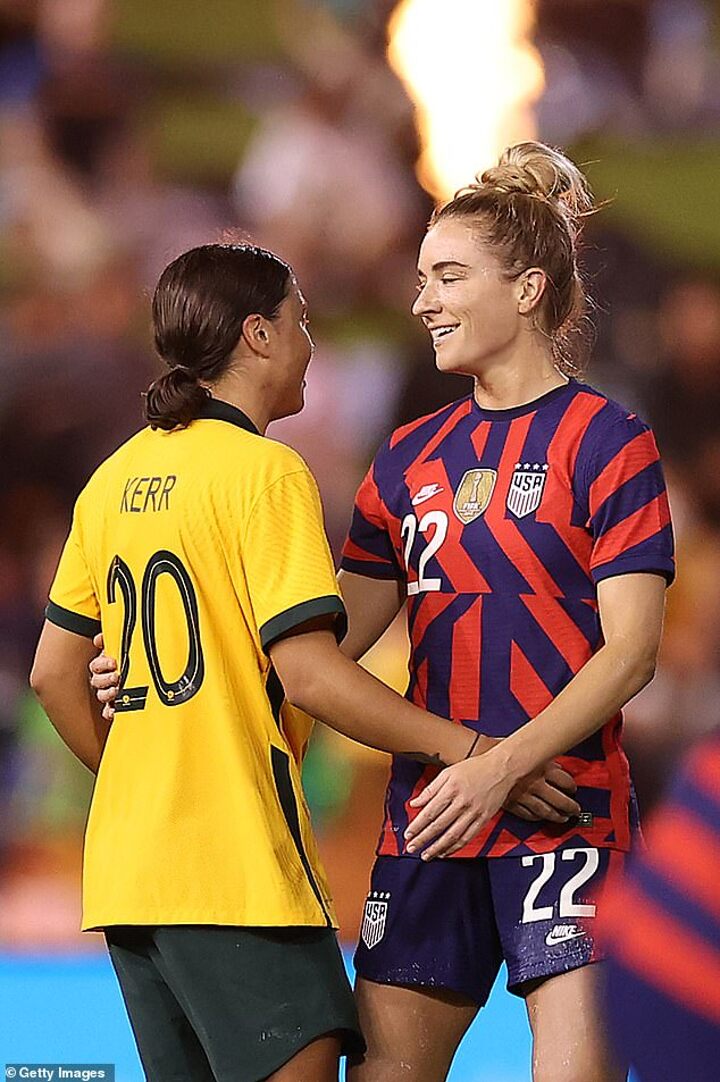 While the pair no doubt struggle with not living each other's pockets, they clearly enjoy every single second of the time they do spend together, whether on the field or off.

Mewis plays for the New Jersey-based Gotham FC in the fabled National Women's Soccer League, while Kerr is the face of the Women's Super League in England, where she plays for Chelsea.

They joyfully embraced each other after a 1-1 draw between their national sides in 2021, and flood social media with heartwarming examples of how much they love each other, and their wide circle of friends.

But foremost in Kerr's mind at the moment is the upcoming Women's World Cup in Australia and New Zealand, which is less than six months away. 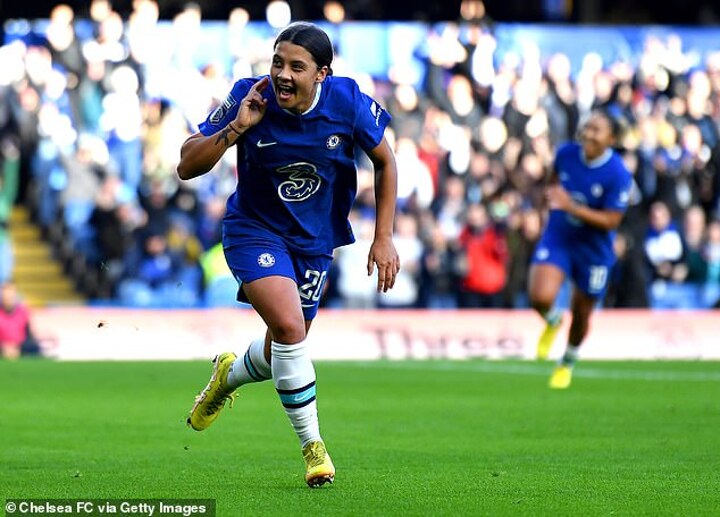 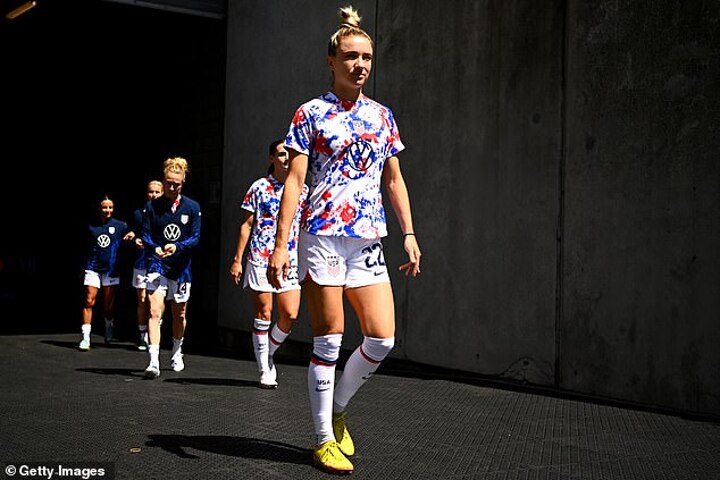 Though her WSL and Champions League seasons, much will weigh on the mind of Kerr ahead of a home World Cup, a once-in-a-lifetime opportunity.

It's clear both she and Mewis will not be holding back in the slightest, with both Australia and the USA entirely realistic hopes of taking out the tournament.

'We're just raging for the next six months to the World Cup, doing whatever we can,' Kerr said.

'We both feel like we've been gunning for this World Cup for so long now that it's kind of going to be like we're just giving everything for the next six months and then it's gonna be like a breath of fresh air.'

Kerr, like many Aussies abroad, couldn't return home to her native Western Australia, which had some of the toughest restrictions in the world.

But fortunately the World Cup, and upcoming Cup of Nations against the Czech Republic, Spain and Jamaica, means Kerr will be able to enjoy her favourite country on earth, much to the delight of Aussie football fans. 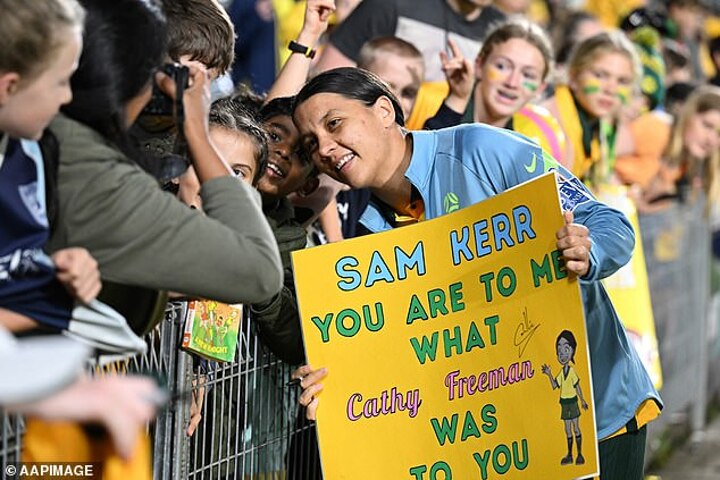 'This next international window in February is going to be amazing,' Kerr said of the Cup of Nations, which begins on February 16.

'Every time we've played at home we've broken a record crowd. Recently we played in Melbourne and we had an amazing crowd ... Australians love the Matildas.

'Everyone in Australia is absolutely pumped [about the World Cup]. My family's pumped because they don't have to have their passports out and spend thousands of dollars,' joked Kerr, whose globe-trotting exploits in football have no doubt given those passports a few stamps.