Saturday saw Everton beat Liverpool at Anfield for the first time since 1999 - but it is Crystal Palace's smash and grab victory over Brighton that has hogged the headlines since. 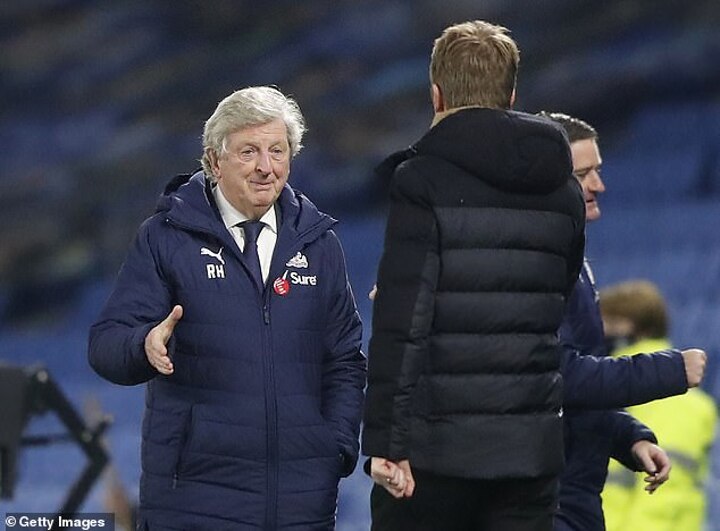 Palace have been labelled as the masters of smash-and-grab victories after Roy Hodgson's arrival at the club in September 2017 has seen them pick up a series of impressive away wins at Manchester City and Manchester United over the years.

Monday’s result against their bitter rivals in the 'M23 Derby' added to their record of last-gasp results and proved precisely why the Eagles have been given such a title.

Palace only touched the ball twice in the opposition box and registered just 25per cent possession but managed to walk away with a 2-1 victory thanks to Christian Benteke's injury-time winner. 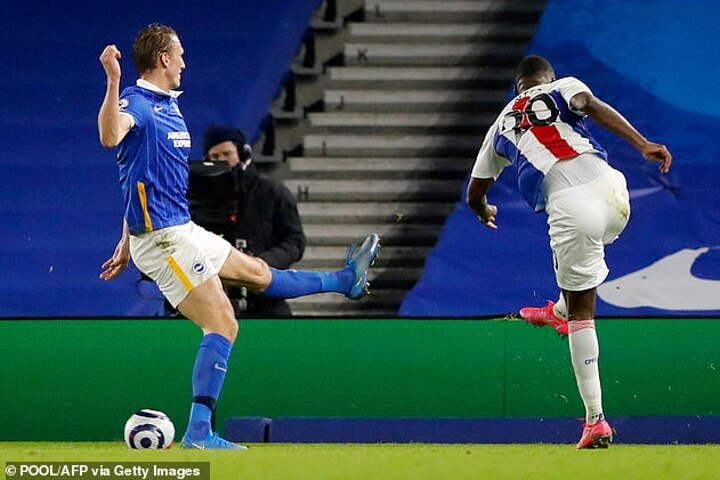 Brighton had 25 shots against Crystal Palace - with 19 coming in the second half - and also dominated possession with 75 per cent of the ball.

However, it was Benteke arrival as a substitute in the 75th minute that changed the game. He scored a super volley in the fifth minute of second-half stoppage time to build on Jean-Phillippe Mateta's first half backheel.

This wasn't the first time Hodgson's side have pulled off a sensational win despite having very little possession.

Cast your minds back to September 2020 when Wilfried Zaha's controversial 74th-minute penalty condemned Manchester United to a miserable start to their Premier League campaign. 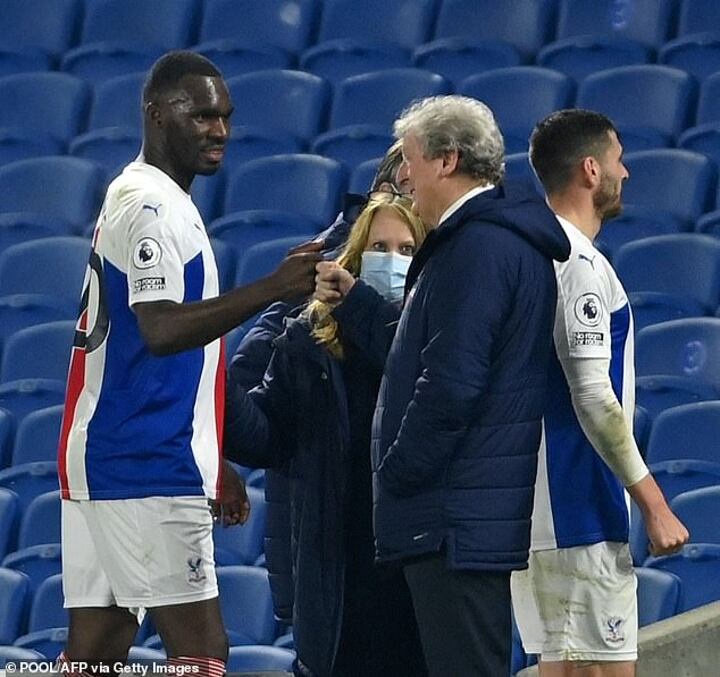 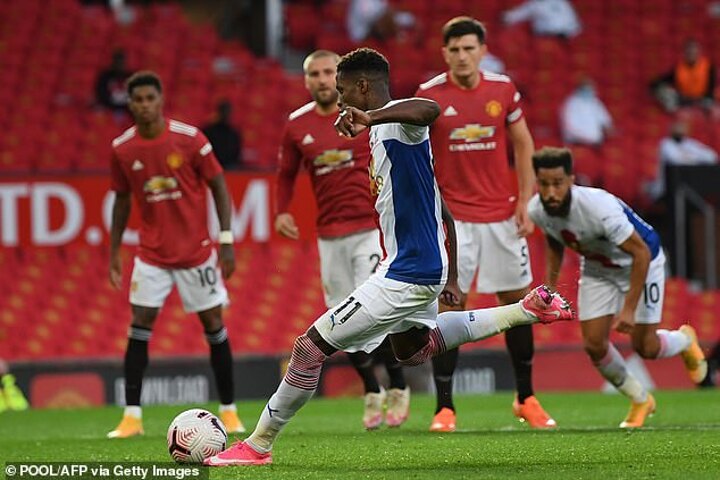 Andros Townsend opened the scoring in the seventh-minute by sending Jeffrey Schlupp's cross into the far corner of the net before Donny van de Beek pulled one back for United just 10 minutes into his debut.

However, referee Martin Atkinson gave Palace the opportunity to snatch a last-gasp victory after awarding a penalty against Victor Lindelof for handling the ball inside his own box.

David de Gea thought he had denied the smash-and-grab masters of their late winner when he saved Jordan Ayew's spot-kick, but Atkinson ordered a retake as he claimed the keeper had moved off his line.

As a result, Zaha stepped up for the second attempt and made no mistake to see Palace win the game 2-1.

Such a victory meant that Palace had won their opening two games of a top-flight season for the first time in their history, despite only having 24 per cent of the possession against the Red Devils that day. 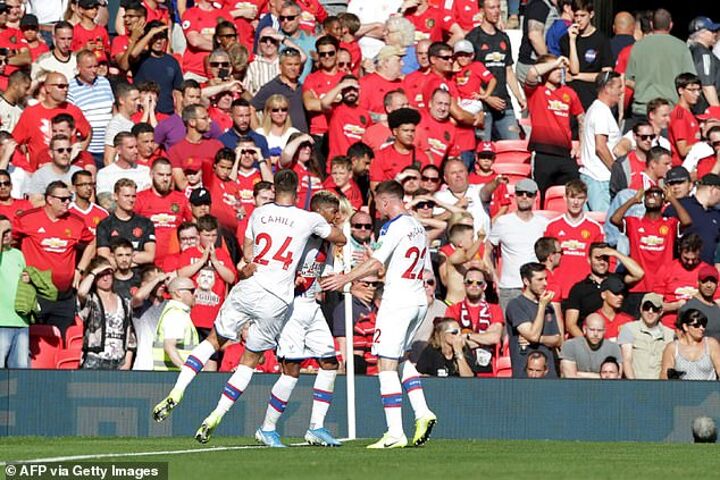 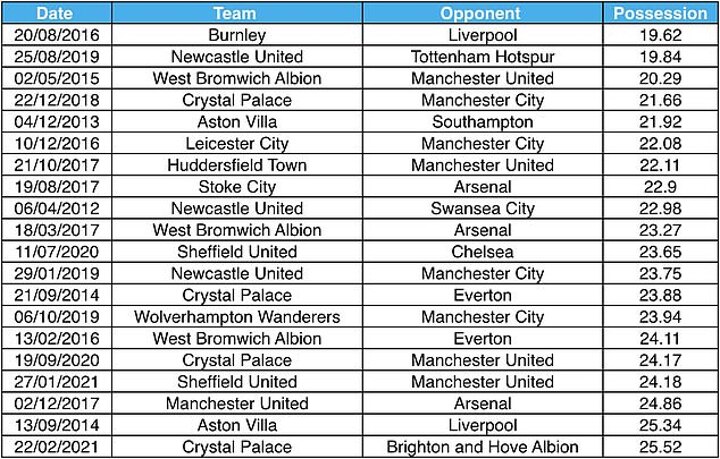 Hodgson's side also sealed what he called a 'heroic victory' against United in August 2019 as Palace struck wtih an injury-time winner to record their first victory at Old Trafford since 1989.

Van Aanholt effort even saw him became only the second player to score a 90th-minute winner against United in the Premier League - after Thierry Henry for Arsenal in January 2007 -  and become the first to do so at Old Trafford.

Newcastle have experienced the same sort of fortune as Palace, having secured last-minute victories against Tottenham and Manchester City in 2019 despite having 20 per cent and 23 per cent, respectively.

West Brom have also had their fair share of impressive low-possession results, having beaten Manchester United in 2015 with 20 per cent possession and Arsenal in 2017 with 23 per cent. 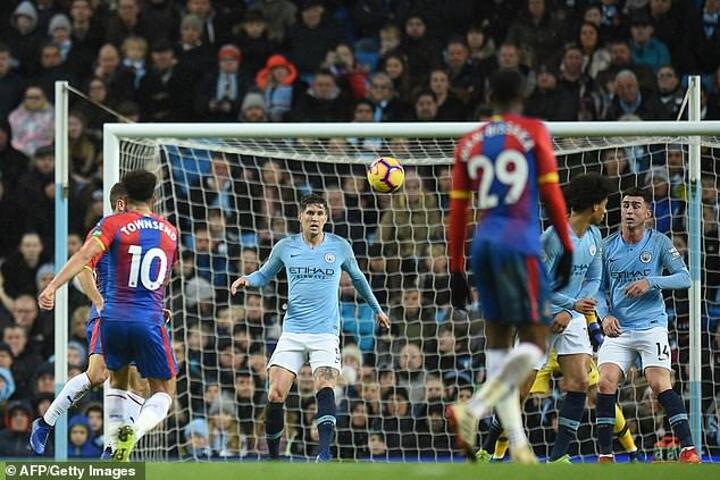 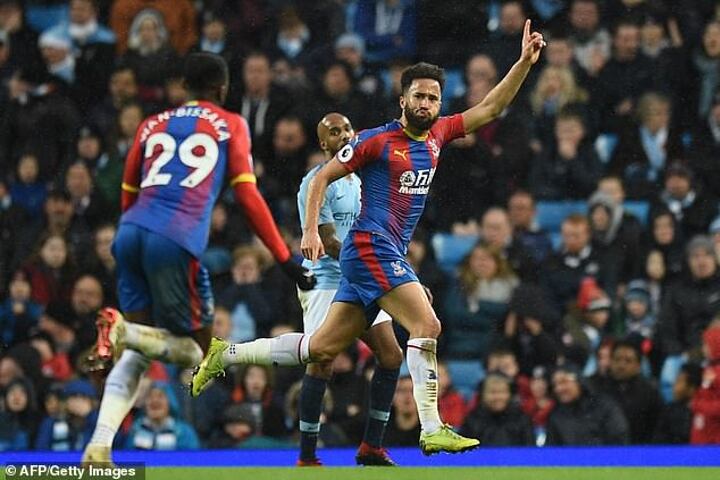 However, very few teams have been able to consistently cause Premier League upsets in the same way Palace have.

Not only have Palace successfully claimed three points against United, but theyalso conquered City while having just 21 per cent of the possession.

Palace had what Hodgson described as 'one of those bonanza days' in December 2018 when they stunned Manchester City at the Etihad Stadium.

City suffered a shock 3-2 loss to the Eagles despite having over 79 per cent of the possession.

Hodgson's men scored from their first two shots on target, with Andros Townsend's effort being crowned the Premier League goal of the season. 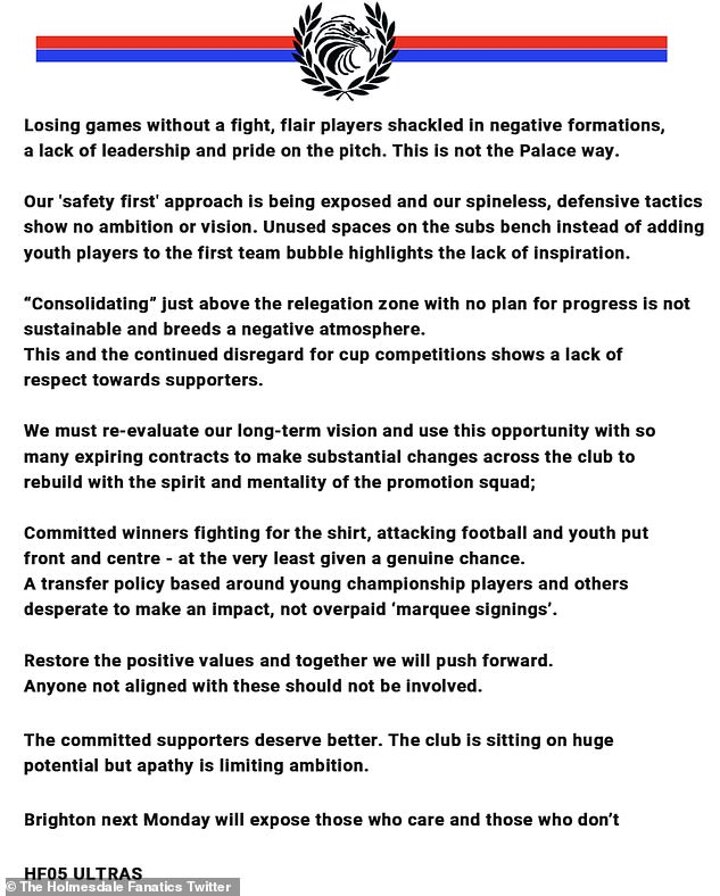 However, despite Hodgson's track record of smash and grab victories against some of the league's biggest names, the fans have not always been supportive of his tactics.

Following back-to-back defeats against Leeds and Burnley this season, Palace fans hung a banner outside the club's training ground, which read: 'Palace pandemic of apathy. Change this mentality. Restore the pride, ambition and vision.'

The Holmesdale Fanatics supporter group even wrote an open letter to the club, accusing Hodgson of 'spineless, defensive tactics'.

Nevertheless, Hodgson has made it clear the only numbers he is interested in are goals scored and that their lack of possession does not worry him.

Speaking after their victory over Brighton, Hodgson said: 'The game's not about touches in the opposition box, is it? The game's about scoring goals and not letting any in,' he said. 'I thought we worked unbelievably hard to try and make certain we didn't let any goals in. 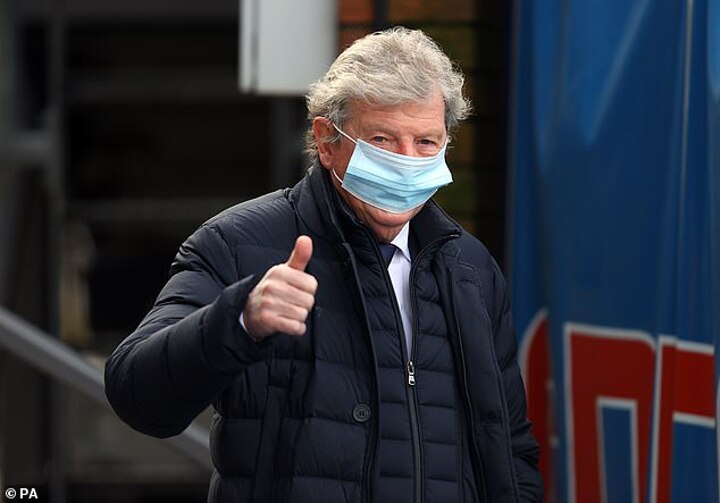 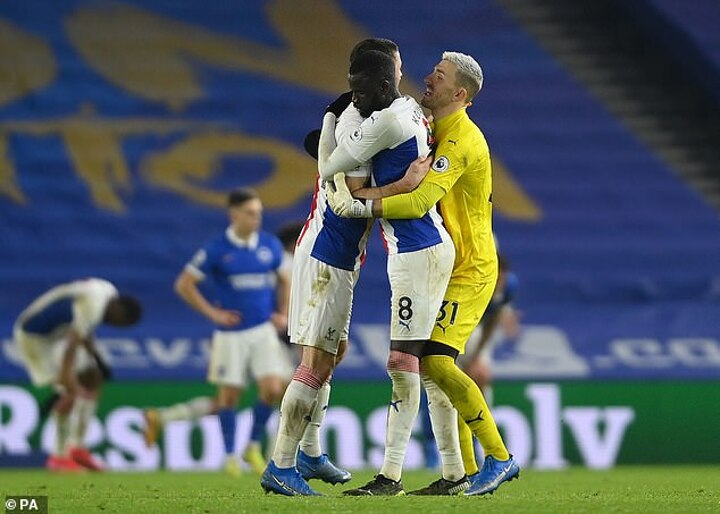 'I thought we worked so very hard to stop them getting many chances, and tonight we were fortunate that the couple of chances we did create - and they were both very good goals - we took. The statistic that counts at the end of the day is goals against and goals for.

'OK, they had the better of possession, that's for sure, they had the ball in our box more often, they had more quality, but I'm not going to apologise for coming away with what we consider to be a very good victory.'

Palace's last-gasp efforts have paid off for the club as they have achieved their highest points total in Premier League history after 25 games.