Jose Mourinho insists he 'is more motivated than ever' to arrest Tottenham's dramatic slump in form and write a positive entry into the club's history. 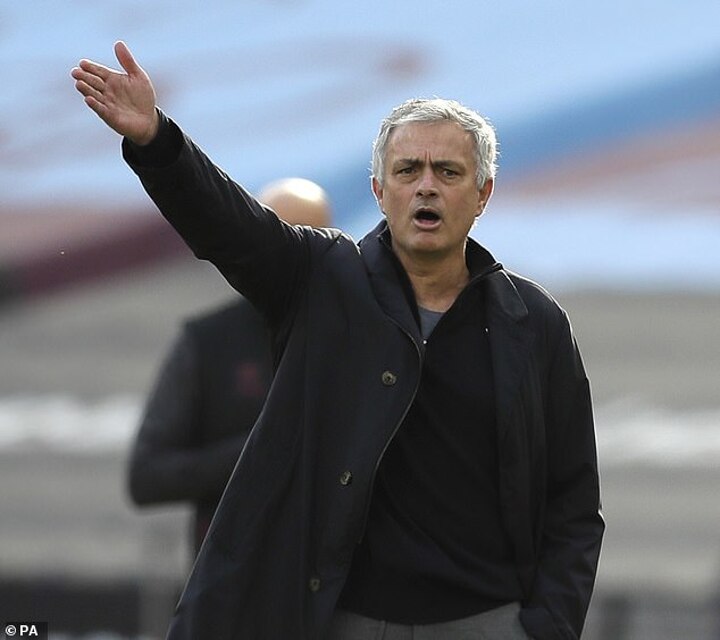 Speculation over Mourinho's future at the north London club intensified after Sunday's 2-1 defeat at West Ham, which was their fifth defeat in six Premier League matches.

But in a monologue on the demands placed on managers in his press conference to preview Wednesday's Europa League game with Wolfsberger, Mourinho said he isn't feeling 'depressed' and still 'wakes up wanting to come to work.'

He also insisted his relationship with Spurs chairman Daniel Levy remains strong and hit back at suggestions some players had grown tired of his training methods.

He said: 'It's positive in the negative that you say I'm not used to this but I want to know which coach has always had blue sky and never cloudy or a bit dark?

'Perhaps only a coach who is always at a dominant club in a league. It shows how beautiful my career has been.

'Does it make me depressed? No. It's a challenge.

'I work for the club, the players and the supporters. I always feel I have to give them so much. It hurts me and it is a great challenge for me and I believe I can give it.

'I give it everywhere I've been and I'm more motivated than ever.

'I never felt what normally coaches felt when the results are bad, they are lonely men. That's what we normally are. I never felt that in this building.

'I feel not only respected but supported. Everybody in the same boat. Nobody is happy but nobody is depressed. I feel positive.

'Maybe a bit weird for you after losing so many matches but I'm positive. I'm not happy but I wake up wanting to come here.

'Everybody is loving training and working hard with so many matches.'

Later in the press conference, he added: 'Thank god I'm not the manager I was. We all evolve. Sometimes I had problems, not in terms of results as I didn't have many bad results, but day to day problems and I reacted in a much more emotional way. Instead of helping myself I was creating more conflicts.

'As an example I left Chelsea as a champion. Maybe your experience as a journalist tells you that people with more experience can deal with negative things better.

'We are calm. I am not happy but maturity helps and I am feeling very confident.

'I believe that we will win through and that I will be in Tottenham's history through good reasons rather than bad.'