In every great double act there are two people who compliment each other, and it wouldn’t do for mild-mannered Barcelona coach Quique Setien to have a mellow and inconspicuous assistant. 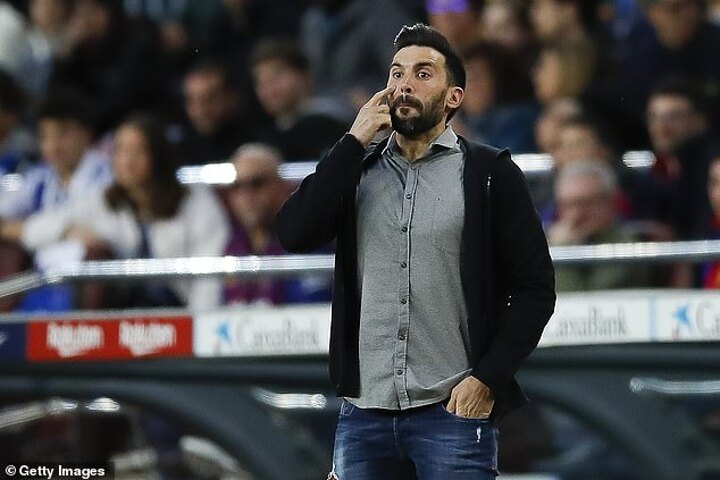 But while youthful, impassioned and opinionated Eder Sarabia might be the right man for his senior partner, he is increasingly looking like the wrong man, at the wrong time, for a Barcelona squad that has not taken to his front-foot style at all.

Radio station SER Catalunya has reported that there was a heated training ground meeting between the players and Setien and his number two on Sunday with Sarabia’s pitchside manner once again on the agenda.

Players did not like the images of him during the Clasico at the start of March very openly despairing of their performance, albeit from inside the dugout. And similar scenes have played out post-lockdown, the only difference now is that, as he covers his eyes in despair at what he’s seeing on the pitch, his mouth is now also covered by the club-shop facemask. Football is in its 'new normal' quarantine ‘normal’ but the club-coaching staff relationship has not improved since pre-lockdown.

Setien hired Sarabia when he was at Las Palmas having been impressed by his work in Villarreal’s youth system. They then both moved together to Betis before the shock call came in from Barcelona.

Sarabia started his coaching career early having been forced into retirement aged just 24 through injury. His passion and knowledge drove him down the coaching route and his talent, and the fact that his father Manu Sarabia had played almost 300 games for Athletic Bilbao, helped fast-track him. 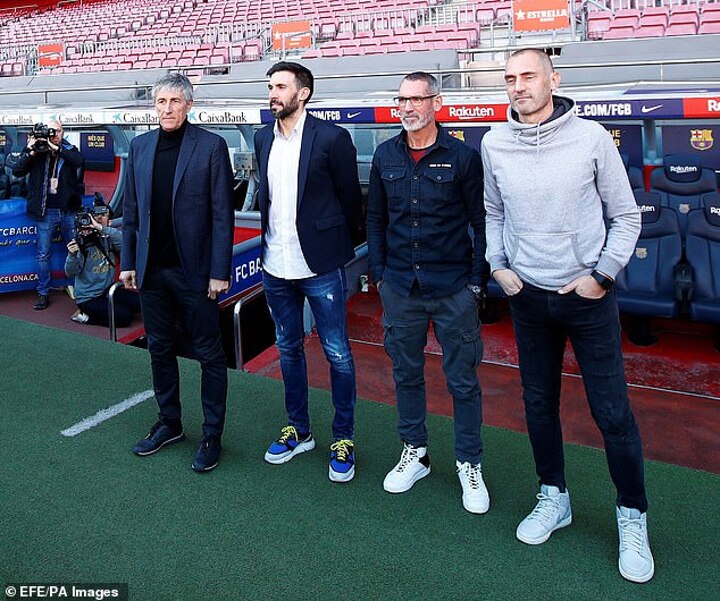 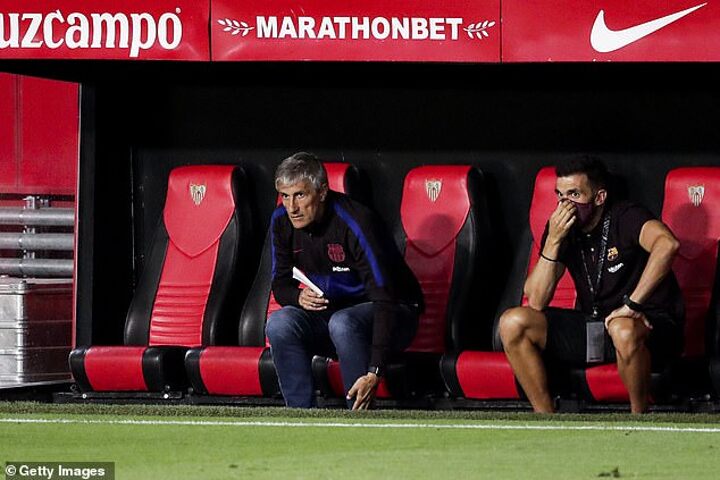 When Eder was an eight-year-old with the dream of making a career for himself in football his dad was a team-mate of Setien’s at Logrones and so Setien was happy to give the promising coach a chance at Las Palmas where Sarabia worked well alongside his father’s old friend.

He was frequently bad cop to Setien’s good cop at Las Palmas. He developed the reputation for being a firebrand. He has been sent off six times and missed 10 games because of bans since working alongside Setien.

Being loud and abrasive on the touchline and aggressively vocal on the training pitch works at smaller clubs but less so at Barcelona where Jon Aspiazu, Tito Vilanova and Carlos Unzue have assisted Ernesto Valverde, Pep Guardiola and Luis Enrique respectively in recent years with far greater restraint.

Not everyone is offended by the shows of passion. 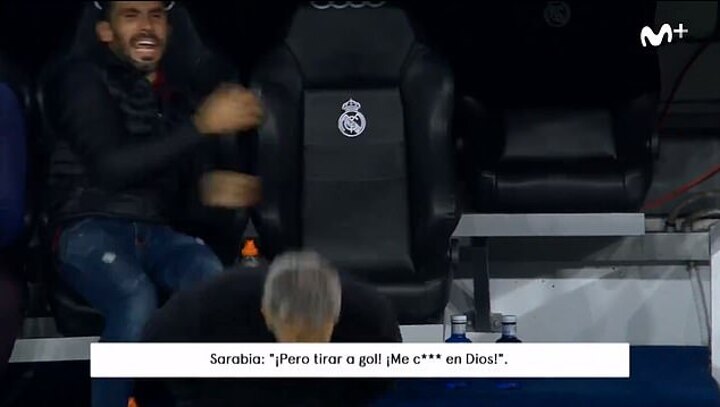 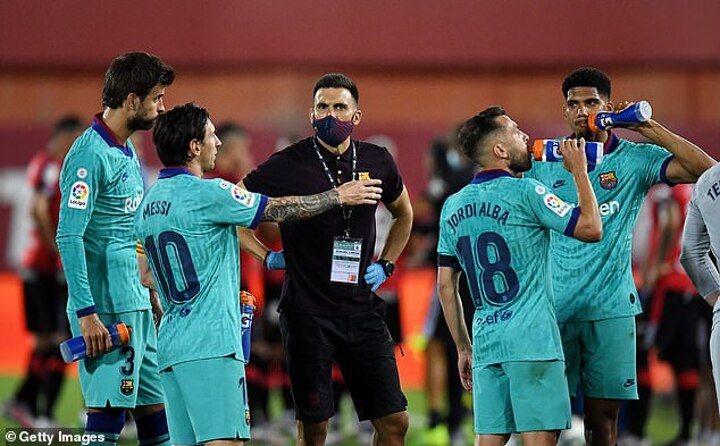 Back when he was first called out for his behaviour during that clasico in Madrid, Barcelona fans largely backed him. He represented them, frustrated at the performances of the team.

Television channel Gol polled supporters and 76 percent responded that they believe Sarabia’s reactions were ‘normal’. Only 15 per cent labeled him a 'show-off'.

Gol’s lip-readers got to work on some of Sarabia's comments after the match at the Bernabeu. According to Gol Sarabia had raged at Griezmann's first half failure to beat Thibaut Courtois by shouting: 'Put it in Griezmann, no! softer!'

He had also responded to two Nelson Semedo errors by saying: ‘he doesn’t do anything that he should do.’ He had then showed his frustration at Arthur Melo: ‘Again Arthur, again… f***ing …’

And he had complained about Barcelona’s pressing saying: ‘Again Benzema is able to do what the hell he likes,’ before appearing to shout at Gerard Pique: ‘Sh*t, this is sh*t. These f***ing long balls.’ 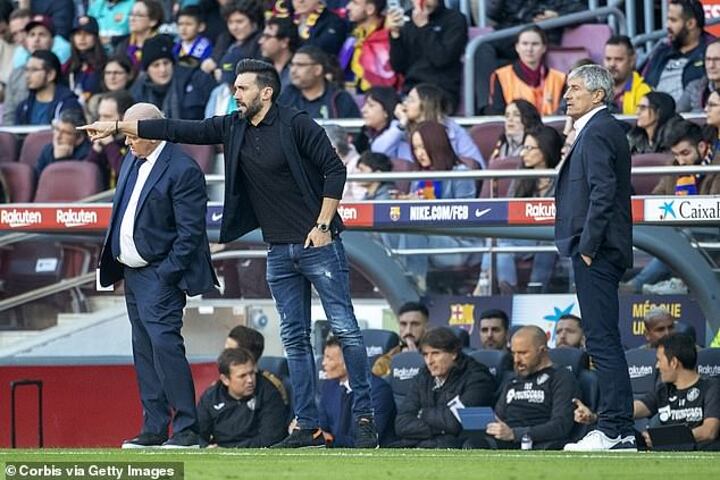 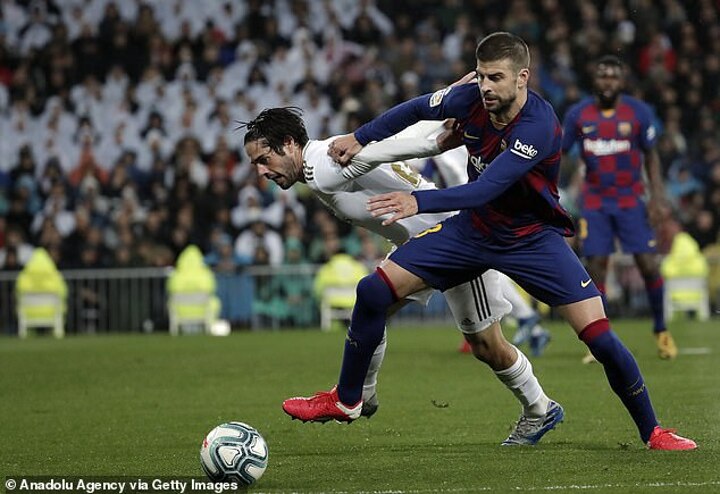 Setien apologised for Sarabia after the controversy but Sarabia vowed not to change the way he is, and the intensity with which he experiences football.

He has always worn his heart, and his opinions, on his sleeve. In 2015 he tweeted: ‘There has never been a goalscorer like Cristiano’. The fact that the tweet is doing the rounds again now will not help relations with Lionel Messi who shunned him in the cooling break on Saturday.

Other tweets about Madrid, praising Zidane, the club’s youth system and Karim Benzema have also been unearthed. It’s harsh on someone who would never have dreamed five years ago that he would be coaching Barcelona. Sarabia is football crazy and it seems only normal that he would opine on every facet of the game on social media.

Now a balance must be sought. Sarabia is clearly more than just a big voice in the dug-out. He has developed a reputation for masterminding team’s opening plays out from the back using the goalkeeper as an extra man. And he became a set-piece specialist coach taking charge of both attacking and defending free-kicks and corners at Las Palmas and Betis. Again how much worth that carries at Barcelona with Messi taking the free-kicks is debatable. 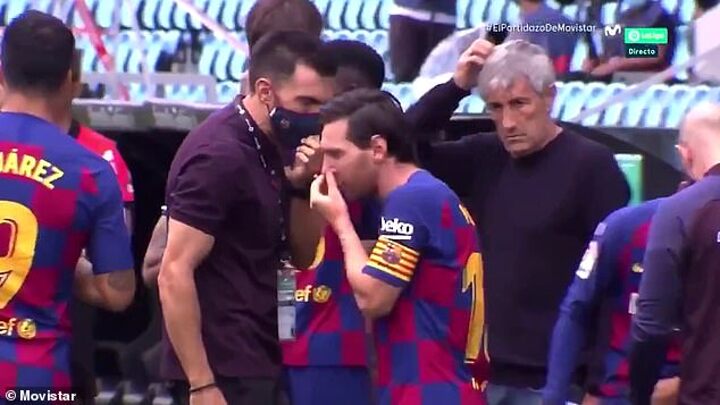 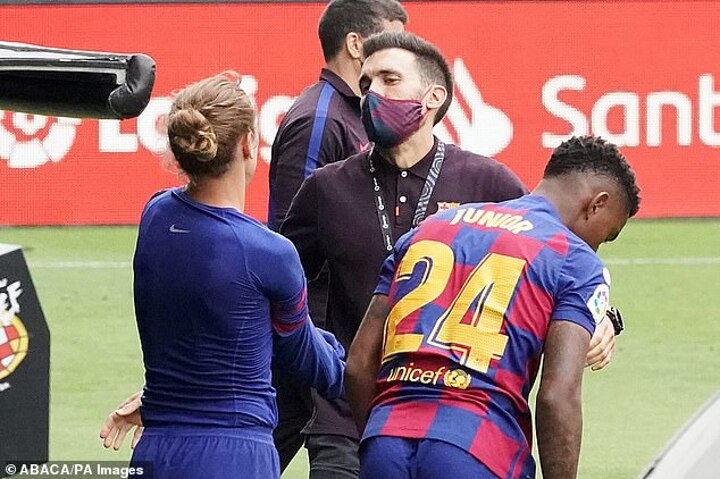 Players it seems want to see and hear less of him. One of the complaints from the dressing room is that they want more direct instruction from Setien instead of from his No 2.

Setien will need to speak with his assistant for his own long-term job prospects. It’s never a good sign when the president and several board members call round to your house in the evening and Catalan media reported that Josep Maria Bartomeu visited Setien’s home last night. It was reported as having been to give the coach his backing. Time will tell how accurate an appraisal of the visit that is.

Sporting director, Eric Abidal, and directors Javier Bordas, and Oscar Grau were there too according to RAC1, the Catalan radio station.

There was no Sarabia, although it seems clear he was one of the topics of conversation, as he has been since January when he and Setien landed their dream jobs.