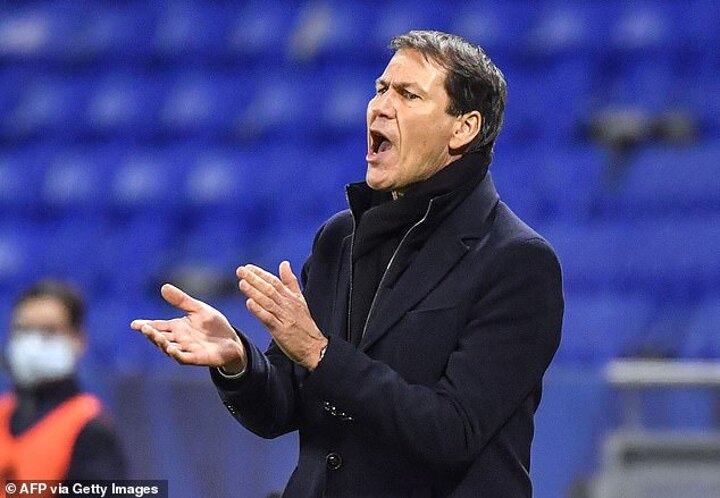 The Toffees have now spent over a week trying to find a replacement for the veteran Italian manager, who jumped ship to former club Real Madrid after 18 months in charge at Goodison Park.

Garcia, meanwhile, left Lyon at the end of the season just finished after guiding the Ligue 1 side to fourth in the French top-flight, thereby just missing out on the Champions League spots.

And according to L'Equipe, Everton have made contact with Garcia about the vacancy but negotiations are still at an early stage.

The Frenchman's finest achievement at Lyon was undoubtedly taking the club to the Champions League semi-finals in 2020, beating Pep Guardiola's Manchester City on the way to the last four.

However, Garcia's side were comfortably beaten 3-0 by German giants Bayern Munich who went on to beat Paris Saint-Germain in the final that year.

The 57-year-old would not be the only manager in the running for the Everton role, as Sportsmail have revealed in the last 24 hours that former Liverpool boss Rafa Benitez and Real Betis boss Manuel Pellegrini are also shortlisted.

The Toffees hierarchy spoke to former Wolves boss Nuno Espirito Santo but agreeing a financial package with him and the coaching staff he wants to bring in has proven problematic.

Everton owner Farhad Moshiri intends to talk to Benitez about the vacancy and the Spaniard's family have lived on Merseyside since he joined Liverpool in 2004.

Moshiri also spoke to Pellegrini in 2016 when he was looking for a replacement for Roberto Martinez, but Ronald Koeman - now at Barcelona - was chosen instead.