Manchester United and football fans have criticized Cristiano Ronaldo for his reported reaction to the club's players receiving a paycut. 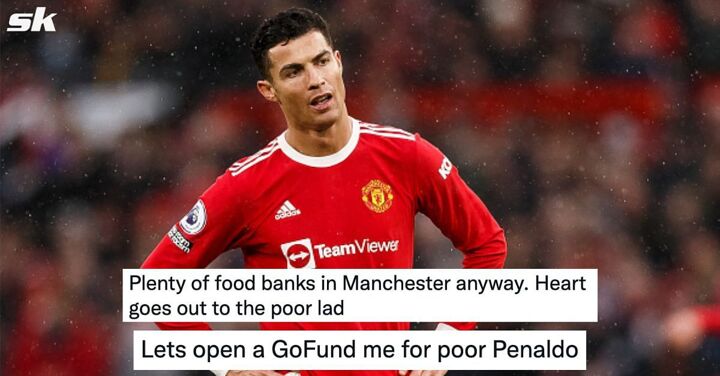 The Athletic's Samuel Luckhurst (via Utd Report) reported that United's failure to qualify for next season's UEFA Champions League triggered a 25% reduction in player salaries. The report added that the drop in salaries has "upset" Ronaldo, though he is still set to earn around £360,000 a week next season.

The development comes after The Athletic also reported that the Portuguese is looking to exit Old Trafford this summer. As per David Ornstein, Chelsea are weighing up a move to sign Ronaldo after he requested Manchester United to let him leave if a suitable offer arrives.

The update regarding the 37-year-old's reaction to the salary reduction has not gone down well with football fans.

Many took to Twitter to express their displeasure, with one simply writing:

Another user took a dig at Cristiano Ronaldo's fans who criticized Lionel Messi for his wages at Barcelona and tweeted:

"and then his fans had the audacity to talk about Messi's wages with Barca."

One wrote that the desire to challenge for titles wasn't Ronaldo's reason for joining Manchester United and slammed him for focusing on money, tweeting:

"Money and jealousy are his driving factors to leave United then. Not 'a new challenge' and 'to win'."

"Oh no how's he gonna survive."

Here are some more reactions to the update:

Cristiano Ronaldo has not reported to Manchester United training

Manchester United welcomed most of their senior players back to the club after a break yesterday (July 4). The likes of Harry Maguire, Bruno Fernandes, Raphael Varane and Fred, among others, returned to the club for the first time since the end of last season.

The biggest name missing from it all was Cristiano Ronaldo, who was not present for today's (July 5) training session either. Ronaldo has cited family reasons for his absence.

He added that it is currently unclear whether the Portuguese forward will travel with the club on July 8 to Thailand and then Australia for their pre-season tour.

Cristiano Ronaldo was notably among Manchester United's best players last season. He scored 24 times in 38 matches across all competitions and even won their Player of the Year award.

However, those contributions were largely in vain as United finished sixth in the Premier League, recording their lowest-ever points tally (57 points). They also prematurely exited the FA Cup, EFL Cup and UEFA Champions League.