Crystal Palace hosted Arsenal at Selhurst Park as the new Premier League season got off to a start on Friday evening. The London-based sides resumed their sporting rivalries as former Gunners captain Patrick Vieira led Palace out against his former employers. 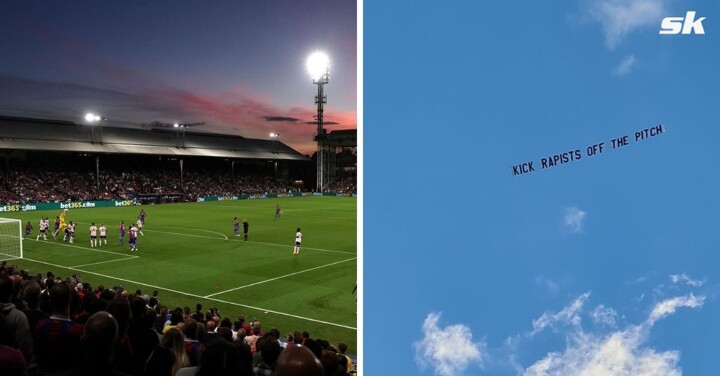 However, before the game started, a banner was flown over Selhurst Park reading:

“KICK RAPISTS OFF THE PITCH”

This is likely in response to a recent news story that a Premier League star is under investigation for sexual assault.

The issue of footballers taking unjust liberties with women off the pitch seems to be a recurring problem. The recent investigations of Adam Johnson, Benjamin Mendy, Gyfli Sigurdsson, and Mason Greenwood come to mind.

The latest news involves an unnamed player who was taken into custody and released in response to allegations of improper sexual conduct. The player in question is expected to feature for his side in the World Cup and is an established name in the league.

Despite the unsavory topic at hand, the match went on without any other disturbances and Mikel Arteta was able to guide his men to a well-deserved 2-0 victory.

The Premier League will, however, hope that it can curb the prevalence of its players in such abhorrent behavior. It will also hope to work to make its stars fitting role models for the boys and girls watching around the globe.

How Arsenal players fared in their Crystal Palace clash

In between the sticks, Aaron Ramsdale made two important stops to prevent Crystal Palace from scoring, but his team seemed to struggle in possession.

Ben White, who started well, struggled and made errors in possession, and he ended up with a yellow card. William Saliba performed brilliantly on his debut alongside Gabriel Jesus, as both center-backs were able to hold down Crystal Palace.

Oleksandr Zinchenko performed well to provide an assist for Arsenal. Thomas Partey was calm in defense and held the midfield steady. Granit Xhaka played alongside Martin Odegaard in the midfield. While Xhaka picked up the Gunners' first yellow card, the captain provided some good passes.

In the forward line, Bukayo Saka looked sharp and provided the assist for Marc Guehi's own goal. Gabriel Martinelli had a shock miss in the first half, but made up for it by opening the scoring for Arsenal within the first 20 minutes. Gabriel was intense and troubled the Palace defenders with his skillful movement.