Paul Merson has claimed Mesut Ozil is 'one of the worst players in the world' when he doesn't have the ball. 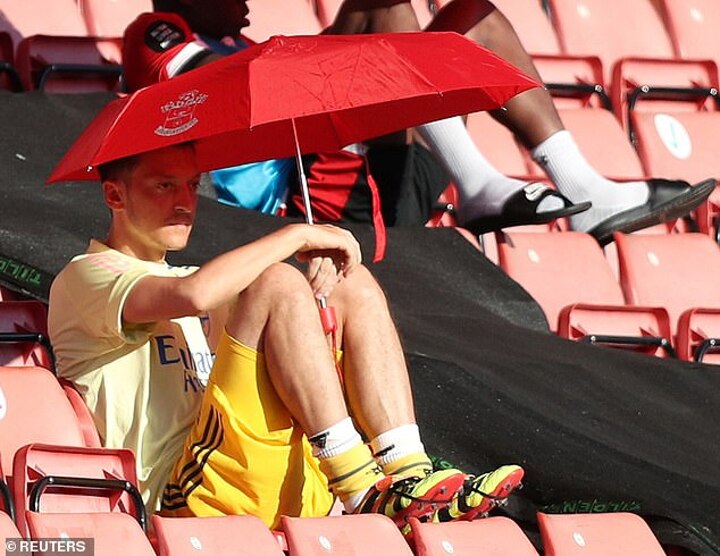 The Arsenal midfielder has dropped out of Mikel Arteta's starting line-up – and at Manchester City, the squad – since the Premier League restarted after the coronavirus pause.

He has also not been used in either of their matches against Brighton or Southampton, and didn't make the squad as they beat Sheffield United 2-1 in the FA Cup quarter-finals.

Arteta has said that the £350,000-a-week German needs 'a little bit of time' before he can play again for Arsenal.

'I think Ozil is a prime example of a player who has to play in a proper team, that is going to be right up there, dominating football matches. He's got to play in a majorly successful team,' Merson told Sky Sports.

'He isn't tracking back, chasing players, and you need him in a team where you're getting 70 per cent of the ball each week, and he'll play. You get players around him, let him play. We all know how Ozil plays, you give him the ball and he'll find you. If you don't have the ball, he won't win it back for you for love nor money.

'He's not interested when they don't have the ball. How can you give someone £350k-a-week when we all knew that was his style of play?

'If he hasn't got the ball he's one of the worst players in the world! I would say that. Name me a worse player in the world when their team doesn't have the ball.

'I've never seen somebody so disinterested when they don't have the ball, but he hurts you at the other end!

'Can Arsenal form a team around him? At the moment, it's at the stage where you can't do that. They're not going to change the team for him. He'll pick up his £350,000-a-week and everything is rosy for him.'

On the decision to hand Ozil a huge pay packet, Merson continued: 'They have to come to a deal with him; maybe he'll take £200k a week somewhere else. I don't know how this gets resolved though.

'Does he want to play football? If he loves football, he has to come to a deal with Arsenal, but it's easy to say that. Nobody wants to lose £150k a week, no matter how much you earn! Who is mad enough to throw that money away, no matter who you are?'