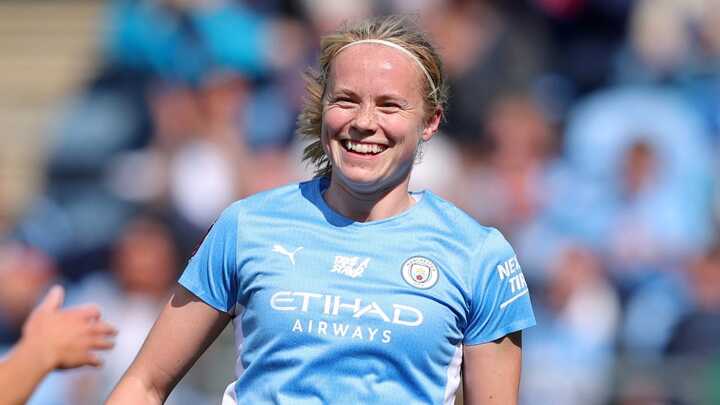 When Julie Blakstad joined Manchester City in January, fans could be forgiven for not knowing much about her.

However, the 20-year-old has spent the last four months making a real name for herself, playing her part in March’s Continental Cup triumph, qualification for the Champions League and Sunday’s FA Cup final - in which City face the same team they beat in the league cup earlier this year, Chelsea.

To move to a new league and a new country at such a young age, midway through the season, is anything but easy. So how has Blakstad adapted so seamlessly?

Speaking to GOAL ahead of the weekend’s trip to Wembley, there is at least one clear reason - she’s inspired by the very best.

On international duty last month, she got to play alongside Ada Hegerberg, a five-time Women’s Champions League winner and the competition’s all-time top goalscorer. She is the latest of the top talent the young forward has been exposed to in that environment, which she was first brought into in late 2020.

“You go to camp and see those players and how they're doing in their clubs - it makes you motivated and makes you want to go and experience it,” she tells GOAL.

“[Ada] coming back, I think that's incredible before the Euros... I try to just be curious, open up, ask questions and learn from [these players] because they've been out there and they have experienced a lot.”

Even growing up, Blakstad was drawn to the best. She highlights Cristiano Ronaldo as her idol and laughs as she says it, given his legendary status with City’s biggest rival. “I think he just shows that if you have goals and if you want to achieve them, you can do it,” she explains.

But the path that has led her to the same city as him is rooted in her national team experiences. As well as getting guidance from the likes of Chelsea’s Guro Reiten and the Manchester United duo of Maria Thorisdottir and Vilde Boe Risa, she spoke to Barcelona’s Caroline Graham Hansen before the move.

“She's been [abroad] for many years and she knows how it is,” Blakstad explains. “I think she's a good example that sometimes you have to jump out and see how it goes.

“[At Manchester City], you have those [big] players every day. It's a big difference when you can play with them not only one or two times a year, but going to the training ground every day, facing those players. You want to compete against them and be at the same level.”

Blakstad’s level has been good, too, to say the least – and she’s only going to get better. That growth will be aided massively at City in so many ways: in the quality within the club, the big experiences she will get playing for them and the level of opposition – all factors that will be on show this Sunday.

“I feel like leaving Norway, you will have that opportunity. You will see people all around the world and face the best players in the world,” she believes, adding that she’d love to face Barcelona.

“It would be really fun to play against them,” she says, summing up her desire for a challenge. “I just like the way they play and want to see how I could do against them.”

There are not many clubs like City – who faced Barca in the UWCL last season – that could give Blakstad what she wants in her career at this moment. It’s a club that wins trophies, but it’s a club that trusts young players too.

“I think at my age, it is more important to develop than win everything - but if you can do both in the same club, that is the best,” she says.

“When I chose my next club, it was important for me that they give young players opportunities and Gareth has shown that he'll do that. It's really good for me as well that I see that other young players have had that opportunity and that they are developing.”

The Continental Cup final triumph over Chelsea in March was the perfect example. Only four players in that squad were 30 or older and five were players who spent time in the club’s youth set-up before making their debuts.

After a difficult start to the season, it was a trophy that gave the team in general a boost, too, helping to spur them on to Champions League qualification and this weekend’s final.

“I think it was important that we felt that we could beat the best,” Blakstad says. “I feel like that's a good motivation going into the FA Cup final as well, seeing that we actually can beat them and play really well.”

But for all the talk of winning and players with trophy-laden careers, that’s not what has driven Blakstad to this point.

Ahead of what will be one of the biggest occasions in her short career to date - a cup final, at Wembley, in front of a potentially record-breaking crowd – her focus is to “enjoy the moment” and “take in all the emotions”.

“I always had that motivation from inside that I would think of football as being fun,” she adds. “It's still the most important thing to me that I enjoy going out on the pitch and playing.

“I think the day that I stop feeling that it's fun to play, I don't need to keep going.”