Vinicius Junior has lofty ambitions for Real Madrid once the season resumes. 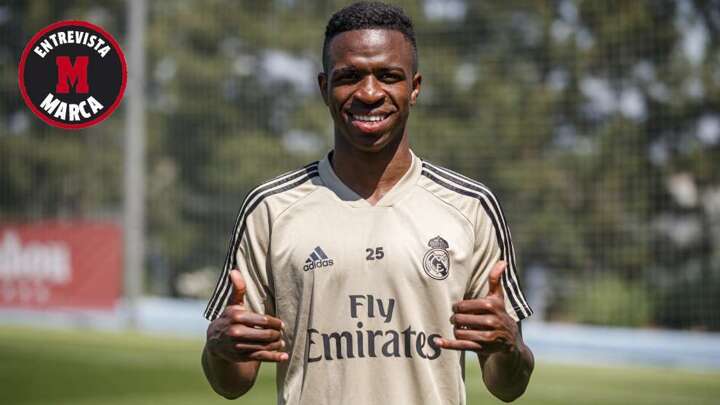 The 19-year-old Brazilian had established himself in Zinedine Zidane's team before the coronavirus pandemic halted the season and now he wants to finish what he started.

On the third anniversary of the announcement of his move to Real Madrid, MARCA spoke to the forward about his hopes for this season, his personal drive to succeed and his thoughts on the pandemic.

What has lockdown been like for you at home?

To start with, it was all very strange. It was a blow personally and for my family. Not going out to train in the morning, not being with the team, not travelling, not playing football matches... We understood the seriousness of the situation very quickly. Fortunately, the club's medical staff were very quick to advise us all.

Were you able to train normally?

That wasn't a problem. Strange, I know, but it wasn't a problem. From the very start, the boss and the coaching staff were right on top of us, both in an individual way and with special sessions in groups. It was something that I won't forget, although we'd all like to forget it. We realised that we were living in a very unique moment in history because what is happening is truly unbelievable. Lots of people have suffered and are still suffering throughout the world and, in Spain, as well as my country, there is a lot of sadness. 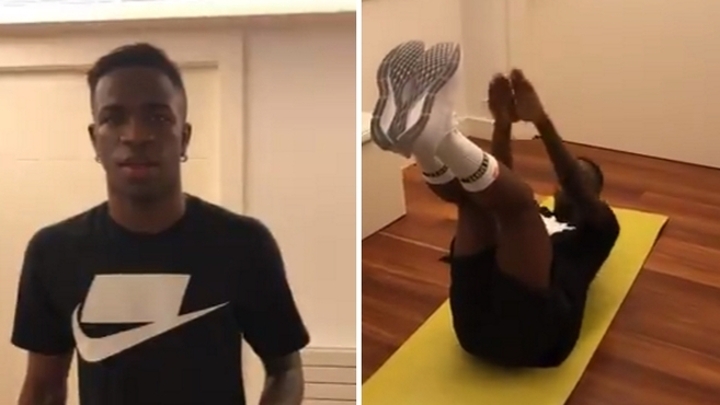 What did you miss most?

You never miss the little things until you lose them. Being able to walk down the street, go out to the cinema... Professionally, life changes completely for you. The journey to Valdebebas, the contact with your teammates, receiving instructions from the coaching staff, training sessions every day and recovery sessions in the afternoons... As well as that, the matches and the noise of the fans. You lose all of that just like that, from one day to the next and it's really odd.

Has the current situation worried you?

A lot, because I've heard very different explanations. Some were saying that it wasn't a big problem and others were saying that it was really serious. I think we've all learned something from this catastrophe: giving more value to people and the little things. In the first few weeks, the news was terrible because of the number of deaths. Terrible. Putting myself in the shoes of all the families who have lost I loved one, it must've been very hard, not only for their loss but the way it happened. If I have to sum up my feelings in some way, it's powerlessness.

The news coming from Brazil isn't positive either.

It's terrible. They're really suffering in my country, like we were here in Spain a few weeks ago. I've suffered a lot for Spain and now I'm suffering a lot for Brazil. The people are really scared and it's logical.

Did you ever think that the season might be over?

There were moments, when the crisis was huge and the number of deaths was so high, that I thought it was impossible for football or anything else to come back in the next few months. But we're starting to see the light at the end of the tunnel. I imagine that's what has happened to everyone. Now, I'm convinced that we can get things back bit by bit. One of those things is football.

The pictures you have posted show that you've gained muscle and power - what are you looking for with the change?

Well, it's a result of two months of very dedicated and very constant work. Without matches and working consistently and with discipline every day [means that] all your muscles work a lot more and in a more solid way. I don't think I've gained muscle. It makes me feel like we've all gained [muscle] because we've worked very hard and in a different way to what we've down our whole lives.

Football-wise, what do you have to improve?

I've heard the boss say at times that he learned things until the last training session of his career. I have the same feeling. I'm sure that you can always improve everything. What I want is that I leave Valdebebas every day a bit better than when I arrived. 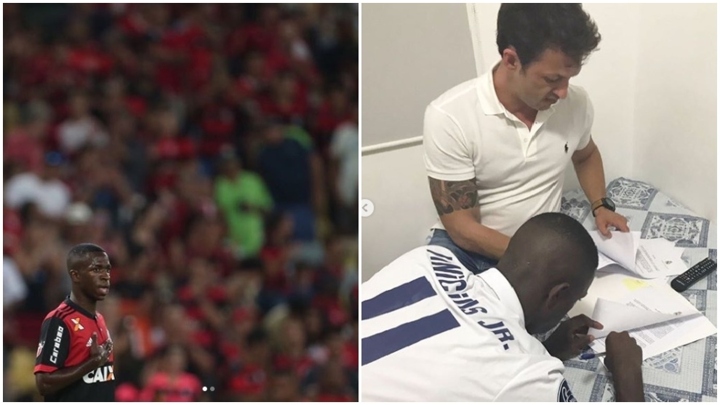 Did you find it difficult at Real Madrid to start with? In terms of settling in? You had a brief spell with Castilla.

All changes are big and a change like that was huge for me and my team. My whole world changed completely and people wanted to see a great player straight away - a boy that can't be affected by anything. But I knew that all big changes need big sacrifices. I was prepared for that, to work in silence, to sacrifice myself without seeing big results straight away. It was very important to keep a cool head.

What remains of that kid from Flamengo, three years after his move to Real Madrid was made official?

My roots and the people that brought me up remain. But Spain brings me the same hunger for football and the same faith in myself. I grew up dreaming about football and now I'm still dreaming about football. My passion hasn't changed. That passion made me really strong in a difficult world; it's still fresh, intact and that makes me feel really strong.

Your brief time with Castilla gave you lots of good things and you soon went up to the first team. Was there more pressure then?

When you talk about the strengths of a player, you talk about how they play, but a very important factor is always forgotten about and it can change a career - making it a success of a failure. Signing for the best club in the world is what it is; you don't just have to be good, you have to be good every day, and you're surrounded by the best in the world. Either you accept it or you don't get anywhere.

People spoke about your goalscoring, your finishing - did it annoy you?

It didn't annoy me, not at all. I'm the first person to say that you can always improve everything. Always. Until the last day of my career, and that's what I want to follow my whole life - convinced that I always have to improve! I'm the first person to say that. I became a professional football for that, for respecting my profession. Believing that I no longer have to improve something is lacking respect for my profession. I'm telling you now - it will never happen to me. I have to improve until the final day of my career.

The break came at your best spell of the season...

I felt very settled and I noticed that lots of things that I was trying on the pitch were coming off with a certain ease. I was gaining a good balance between what I tried and what came off.

Did you have any doubts when you weren't in the team? 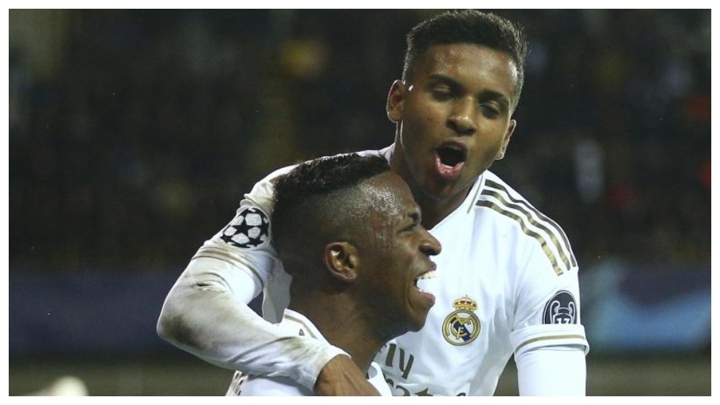 I didn't have doubts. Everyone that comes to training thinks that we deserve a place. The boss is in a very difficult position. I can blame bad luck, other things, but I'm very demanding of myself. When I don't play, I'm just thinking about working hard and showing that I have a place the next day. This is respecting football.

How many times have you watched the goal against Barcelona back?

Ahhh, it was a very good goal - a very good pass from Toni [Kroos]. I've watched it back a few times, of course, because it was a very important win for our fans. We were really hungry to do something like that.

Do you think Real Madrid were better than Barcelona in their two LaLiga Santander meetings this season?

I've watched the games again and I think so. I think we were better than them in more aspects. We've had very good games until now and we have to recover our best form. We're really hungry to come back, to win, and we want to win this league title for our fans. People have suffered a lot and we want to give Real Madrid fans something to cheer about in this situation. We know that winning the league isn't going to be a solution for big tragedies, but it would be something to smile about, something to be happy about.

There are 11 games to go, 11 finals, in completely different circumstances...

The result against [Real] Betis was a great shame. Now, we have a mission we can't fail. We can't fail and we're not going to fail.

You'll have to be in top condition - are you ready?

Mate, we may have only returned [to training] 11 days ago, but everyone's rhythm looks good. We've still got lots of group work to do because we can't do it yet, but all my teammates are very strong and very well. There's still quite a bit of work left to do, but we're feeling good.

Then you've got the Champions League afterwards...

If the Champions League returns, it will be great news not only for football, but for the world. Being able to play games in other countries will be a very positive sign because we'll be closer to normality. The result of the first leg [against Manchester City] was bad, but we're Real Madrid. Our obligation is to prepare ourselves well and, if this game comes, when everything is over, every Real Madrid fan can say: they gave everything, we're proud.