Martin Odegaard has started just three LaLiga games this season, but Zinedine Zidane says the playmaker is not "discouraged". 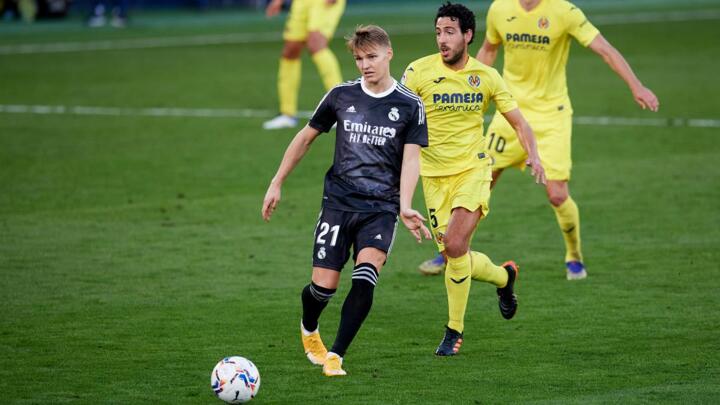 Zinedine Zidane has no doubts Martin Odegaard will succeed at Real Madrid despite his limited appearances for Los Blancos this season.

The 22-year-old was recalled by Madrid in August after a stellar campaign on loan at Real Sociedad, where he scored four goals and assisted a further six in 31 LaLiga appearances.

He has struggled to make an impact back at his parent club this term, though, and has been limited to just three league starts.

Not only has he failed to score in those appearances, Odegaard has also not created a significant chance for a team-mate or completed a dribble either.

In contrast, last season Odegaard crafted 10 big opportunities and 62 chances in total – with 27 from set-pieces.

However, Zidane is confident the Norway international will soon make his mark at the champions, who face Athletic Bilbao in a Supercopa de Espana semi-final on Thursday.

"Let him continue working, he is a beloved player and he will surely succeed here," Zidane told a media conference.

"He has not played much lately but the idea is to keep working hard; he will have minutes.

"He will provide insurance. This is a specific moment. In a race things happen to the players, but he is not discouraged."

Jovic not yet ready for return

Luka Jovic, meanwhile, will play no part on Thursday with a loan move to former club Eintracht Frankfurt imminent.

Jovic swapped Eintracht for Madrid in a €60million transfer ahead of the 2019-20 season, but the Serbia forward has endured a turbulent period under Zidane.

The 23-year-old – who managed just two goals in 25 appearances in his first season in the Spanish capital – has only featured in 149 minutes of LaLiga action this term, while he has played in just five matches across all competitions amid ongoing form and fitness issues.

But Jovic is set for a reunion with Bundesliga side Eintracht, for whom he scored 27 goals in 2018-19 before leaving for the Santiago Bernabeu.

Zidane accepts Jovic has been unlucky during his time at the club and expects him to return to top form soon.

"He's a striker who scores goals and that's what we want from him," he added. "He was 21 [when Madrid signed him] and he's had no luck because he had difficulties adapting and injuries. It is not easy.

"He has to learn many things. He has qualities, I have no doubts."