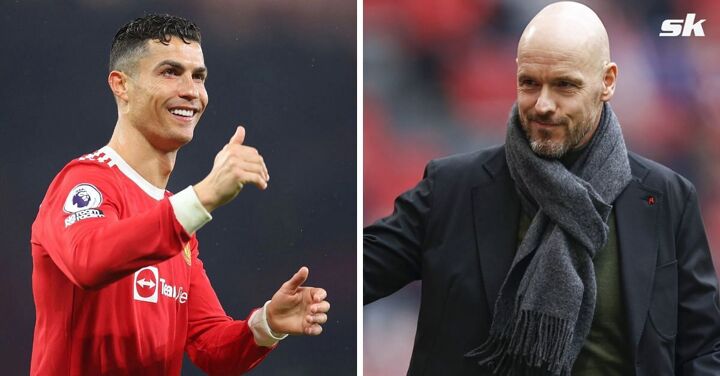 The 37-year-old star made his first appearance of the pre-season on Sunday at Old Trafford in United's last friendly game of the summer. He started the game but was hooked off at half-time, after which he was seen leaving the stadium.

It caused a stir among the fans, who slammed the goalscoring talisman for his lack of enthusiasm amid exit rumours.

Ten Hag was critical of Ronaldo prematurely leaving the game, calling it 'unacceptable' in an interview with a Dutch broadcaster. However, when asked about Ronaldo's action, he retorted by saying that the Portuguese wasn't the only player to leave early that day.

At a pre-match press conference, he said (via Manchester Evening News):

"There were many players who left early, and the spotlight is on Cristiano - that is not right. Do your research."

According to Sky Sports News, United later clarified that the 37-year-old was indeed one of the players who left the stadium before the full-time whistle, but that it wasn't a problem for them. The Portuguese's action, though, intensified his exit rumours, as he's actively seeking new pastures.

With the Red Devils set to begin their new Premier League campaign this weekend, the forward is expected to start on the bench. Ten Hag, meanwhile, is 'happy' to have the star back and heaped praise on him, adding:

"I am really happy. We have a top striker. He is here and is in the squad."

Manchester United host Brighton & Hove Albion at Old Trafford on Sunday in their first league match of the 2022-23 season.

Ronaldo could start for Manchester United in Martial's absence

Ronaldo will likely be benched for United's opening game of the season on Sunday, but Anthony Martial's injury might open the door for the Portuguese to start.

The Frenchman has been ruled out of this weekend's clash, meaning Ten Hag could start their talismanic number 7 as their centre-forward.