Where to begin with Granit Xhaka. The Arsenal midfielder found himself in the headlines for all the wrong reasons this week... again. 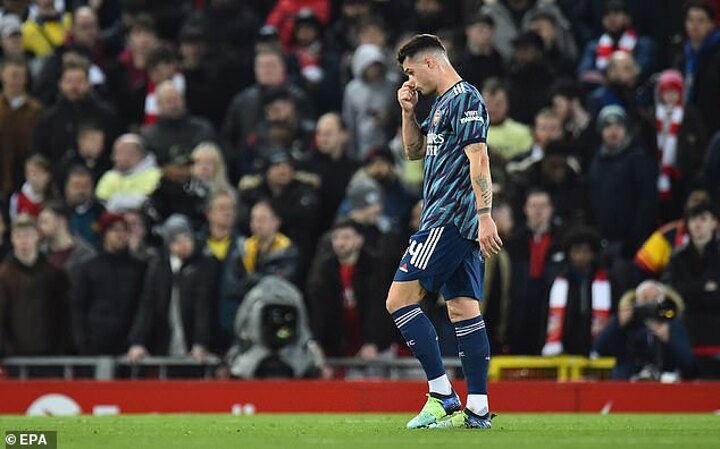 The former Gunners captain was sent off for a fifth time in just over five years at the north London club in the first leg of their Carabao Cup semi-final against Liverpool on Thursday night.

Xhaka apologised to 'everyone' at Arsenal for his clumsy dismissal in the last-four tie at Anfield before he revealed his 'pride' at his Gunners team-mates for salvaging an unlikely draw.

However a lack of discipline and hothead moments from one of the club's most senior figures has become an all too common occurrence.

Not only has Xhaka had more than his fair share of red cards but he's also received 62 yellow cards during his time in the Premier League, and it's hard to forget his astonishing outburst at the club's own fans in 2019.

He stormed off the pitch and told fans to 'f*** off' when substituted in Arsenal's 2-2 draw with Crystal Palace.

Xhaka's eruption saw Unai Emery strip the captaincy from him and omit him from matchday squads as punishment.

Recent reports have linked Xhaka with a move away from the club to Jose Mourinho's Roma. Perhaps Arsenal have finally had enough of his shocking moments.

Here, Sportsmail looks at the five occasions Xhaka let down Arsenal by getting sent off.

Xhaka's first red of his Arsenal career came in a 3-2 victory over Swansea. Theo Walcott's brace and a Mesut Ozil goal had put the Gunners in control with a 3-1 lead with an hour played.

Borja Baston pulled a goal back for the Swans to set up a tense finish at the Emirates, and just as Arsene Wenger's side needed calm heads and composure Xhaka was given his marching orders.

The Switzerland international was shown a straight red card by referee Jonathan Moss for a reckless lunge on Moudou Barrow. 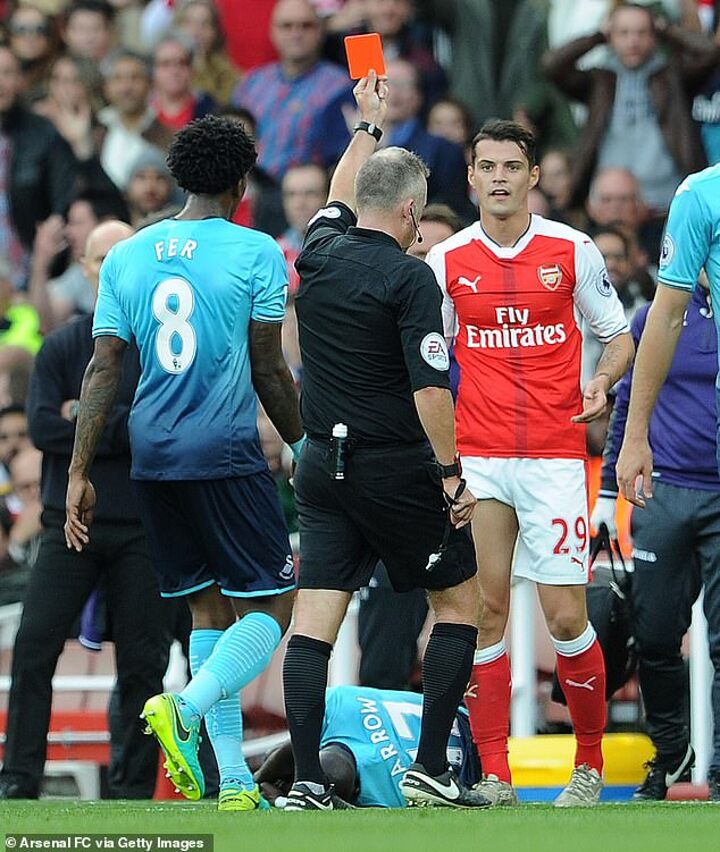 'He is not a dirty player at all, but is sometimes clumsy,' Wenger said after the match.

'He is not a natural defender. He is a guy who likes to play forward, and Barrow made a lot of it as well.

'Because he was gone, the referee saw a bad tackle. It is what it is, he has to learn from it. Intelligence means that you do not make the same mistake twice.'

It was his eighth red for club and country in just over two years and it appears he still hasn't learn his lesson.

Arsenal did manage to hold onto the three points on this occasion but Xhaka's dismissal made it a lot harder than it needed to be.

Just a few months on from his first rush of blood to the head in Arsenal colours, Xhaka was dismissed for a two-footed scissors tackle on Burnley's Steven Defour.

Again it came at a time when the Gunners were control, leading the Clarets 1-0.

Xhaka slid in with two feet in a bid to win possession from Defour after giving the ball away to his opposite number, but his challenge was rash and deemed unsafe.

Xhaka's lack of discipline in the 65th minute almost cost his side three points as Burnley equalised in injury time, courtesy of an Andre Gray penalty.

Alexis Sanchez came to the rescue with a penalty of his own in the eighth minute of stoppage time - much to Xhaka's relief.

Xhaka managed almost four years without looking up at a referee's red card for the Gunners but against Burnley in the 2020-21 season he left the official with no choice.

The 29-year-old grabbed Clarets midfielder by the throat as Arsenal's hothead completely lost his cool in the league clash.

And this time his unjustifiable behaviour did cost the Gunners as they went on to lose 1-0 following his dismissal in the 56th minute.

It was revealed at the time that Xhaka was fighting to save his Emirates career following that moment of madness.

With Arsenal trailing 2-0 to champions Manchester City Xhaka was sent off for the fourth time in his Gunners career.

The midfielder was dismissed for an off-the-ground two-footed tackle on Joao Cancelo in the 35th minute, making the task even harder for this team-mates at the Etihad.

Not only were Arteta's side up against it in the game, they were already under immense pressure after an abysmal start to the season and Xhaka's wild tackle could not have come at a worse time.

'That's 11 red cards in his career, you can't excuse this,' he said on Match of the Day.

'All he's said to his team-mates is 'sorry you're on your own I don't feel this today'. Who he's trying to impress? I don't know.

'You cannot tackle and go in like that, we all know the rules. He's putting his opponent in danger.

'He (Arteta) will be raging at that tackle. You're up against it anyway, you can't afford to do that kind of thing.'

Just when Arsenal needed some solidity and discipline, Xhaka came up short - and Arteta's side were thrashed 5-0. 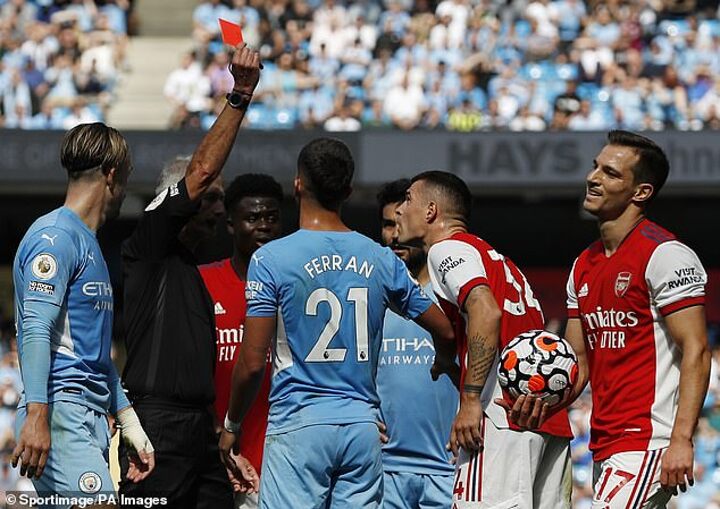 Xhaka left his team-mates with another uphill task this week after a high challenge on Liverpool's Diogo Jota when he was the last defender.

Arsenal had to navigate 66 minutes as 10 men against Jurgen Klopp's Reds at Anfield with the midfielder saying sorry following the 0-0 draw.

Gunners fans ripped into 'clueless liability' Xhaka after the midfielder picked up another red card early on while he was slammed by football pundit Jamie Carragher. 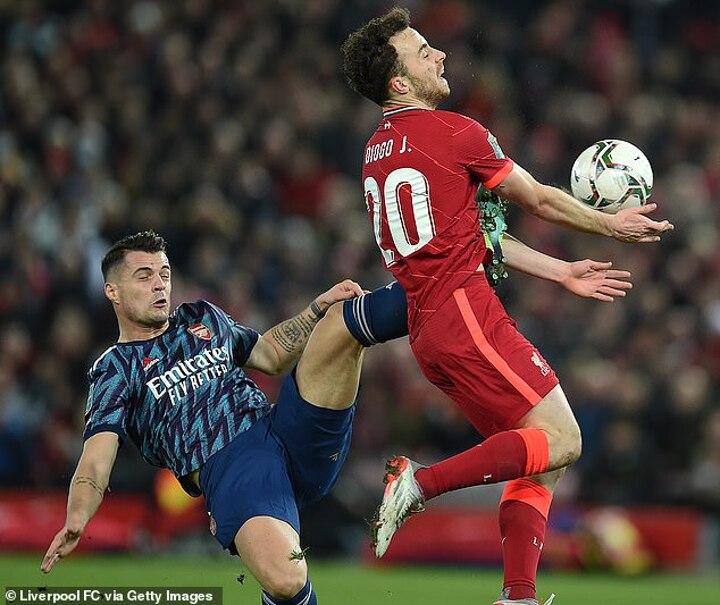 He said on Sky Sports: 'Jota just thinks, "I've got to get my chest on it."

'And then Xhaka does what Xhaka does, he makes an absolutely ridiculous challenge when Jota has got so much to do.'

Only Spain defender Sergio Ramos has more sending offs since the Swiss midfielder made his Gunners debut in the 2016-17 season.

How many more times can Arsenal put up with Xhaka being the bearer of bad news?