They still tell tales in the bowels of the Stadio Olimpico about what they believe was the 'best team to never win a Champions League'. 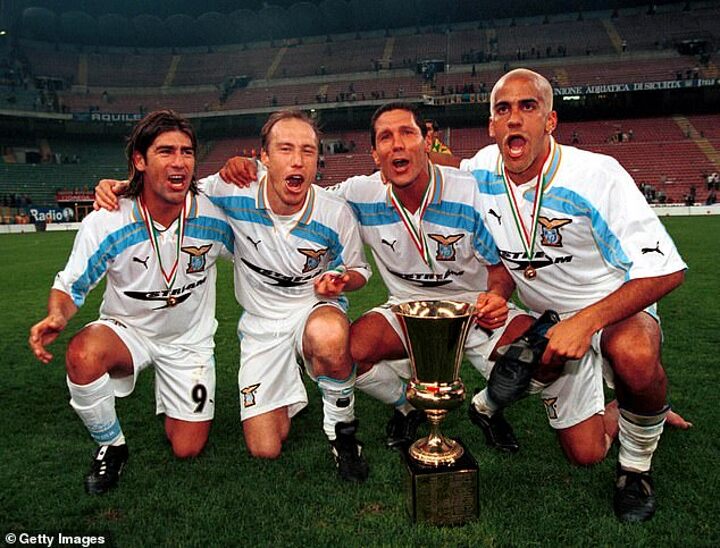 But there's now a generation of Lazio fans who never witnessed the greatness of that side built by Sven-Goran Eriksson. To those who were around to soak it up it remains the greatest side they've ever seen. 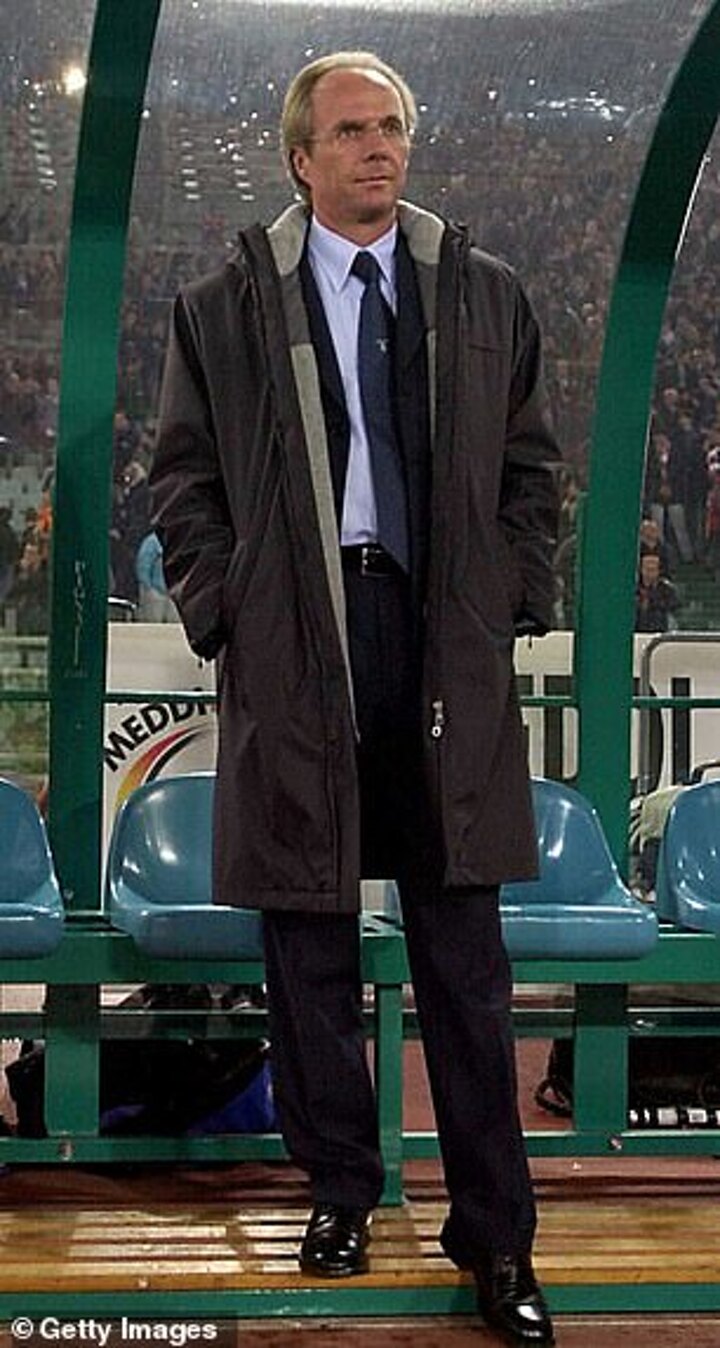 'It was the team of dreams,' Eriksson told Corriere dello Sport in 2016.

'I had a very strong team made up of players with personality and technique. We could have also won the Champions League. We won seven trophies in three years, I don't think that's a small thing. We were at the top of world football.'

And yet as quick as they were able to rise to the top it felt just as swift a demise, particularly in Europe.

There's a saying in Italian that reads 'Non tutte le ciambelle riescono col buco' which means 'not all donuts come out with a hole' - in other words, things don't always turn out as planned. For those behind the scenes at Lazio, nobody could have predicted the mediocrity that would set in.

Tuesday night's visit from defending champions Bayern Munich is the Biancocelesti's first appearance in the knockout stages of the Champions League in 21 years.

Not since Eriksson's 'team of dreams' have Lazio made it this far in Europe's premier club competition.

It represents the longest ever gap between appearances for the same club in the latter stages of the competition. A miserable cycle has been brought to a close.

Eriksson's side bowed out in victory - but in an aggregate defeat by Valencia. A 1-0 win over the Spaniards at the Olimpico was not enough to repair the damage of a 5-2 loss at the Mestalla in the first leg.

The trip to Spain was harrowing for a side that had become strangers to losses.

In fact, over the course of the 1999-00 season, Lazio lost just four games in Serie A en route to what was only their second league title in their history. All four games came away from home - Roma, Venezia, AC Milan and Hellas Verona. 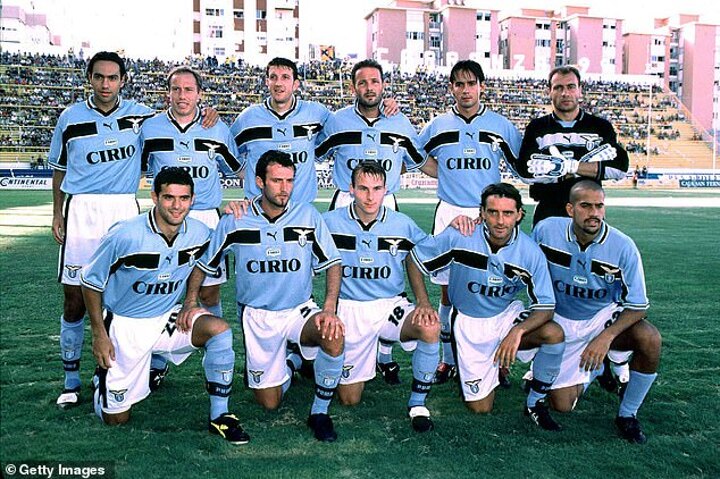 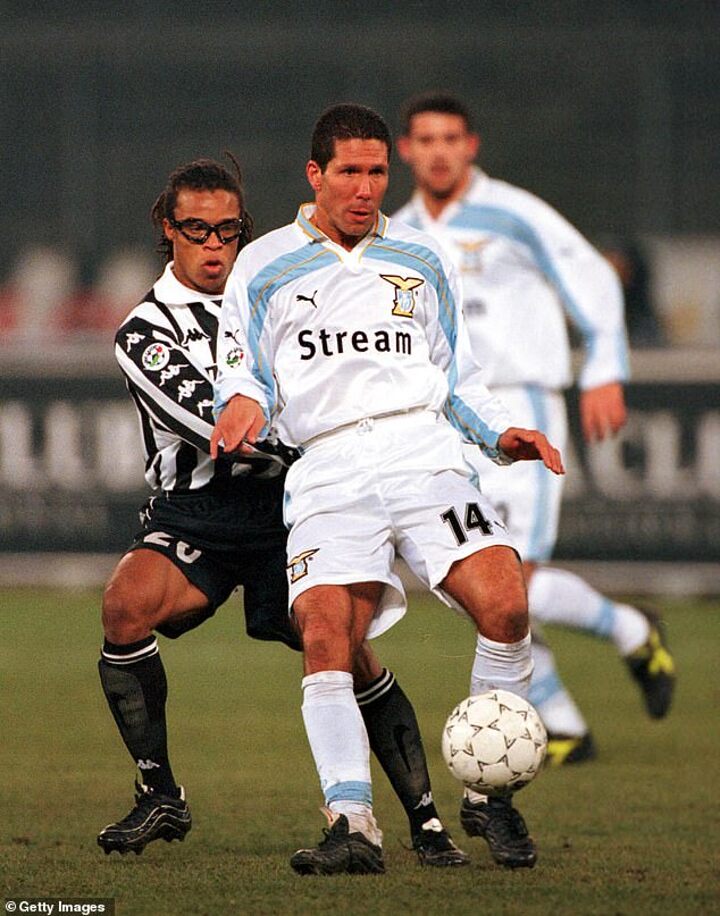 'They were brilliant,' Eriksson added, in conversation with The Coaches' Voice.

'They were all winners, they hated to lose and were brilliant not just in Rome or in Italy but world-class players.'

Eriksson had come close the year before, narrowly missing out to AC Milan and with an ambitious owner in one of Italy's most powerful businessmen, Sergio Cragnotti, he was well financed to build a super team.

In came Veron from Parma, Fabrizio Ravanelli from Marseille, Inzaghi from Piacenza and Simeone from Inter Milan, players that would go on to play starring roles.

It proved Lazio's huge pulling power at that time and the results were incredible.

Domestically they set a new standard, losing just four games as they edged out Juventus by a point to win the title.

But the real challenge was to conquer Europe, something Cragnotti was desperate to do and something the club had never done in their history.

Manchester United's famous Treble-winning 1998-99 season had placed them top of the pile when it came to the team to beat but when Eriksson's Lazio knocked them off to start the season by winning the European Super Cup, expectations in Rome soared. 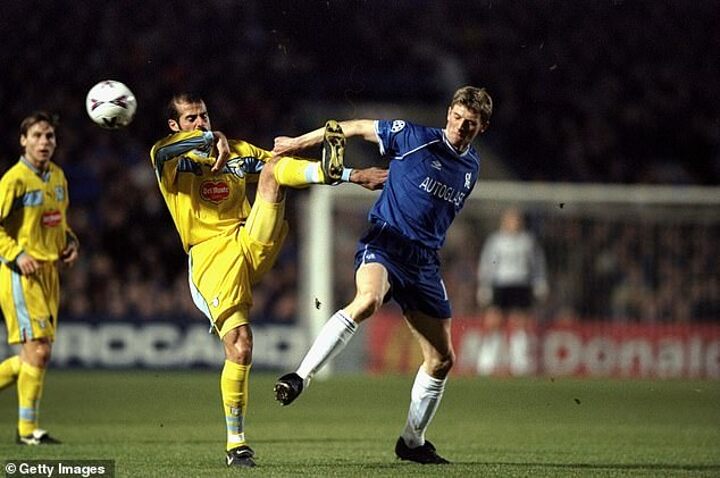 The Champions League format then was different to what many know it as now.

It worked with an additional qualifying round added to create two separate group stages; first with 32 teams divided into eight groups of four and then a second group stage of 16 teams with four groups of four.

Then came the second group stage, a far tougher prospect against Marseille, Chelsea and Feyenoord.

The group opened for Lazio with a trip to Marseille's intimidating Stade Velodrome and Mancini was elected to play off Marcelo Salas in attack.

It was a close affair, Lazio had been well scouted and were kept at bay for an hour before Dejan Stankovic escaped his marker to head in at the back post. Conceicao added a second 12 minutes later to make sure.

This Lazio team did not suffer fools gladly. Five bookings after the 90th minute showed this was a side not to be messed with. Eriksson had built a side who had no appetite to learn what losing tasted like.

The group became muddied for Lazio when, after a nip-and-tuck 0-0 with Chelsea in Rome, Feyenoord went to the Italian capital and left with three points after a stunning 2-1 win. A brace from Jon Dal Tomasson doing the damage that night.

Eriksson's side rallied. They went to Rotterdam and got a draw before hammering Marseille 5-1 in Rome.

It set up a winner-takes-all at Stamford Bridge against Chelsea.  The Premier League side were top of the group on 10 points, Lazio were second on eight. 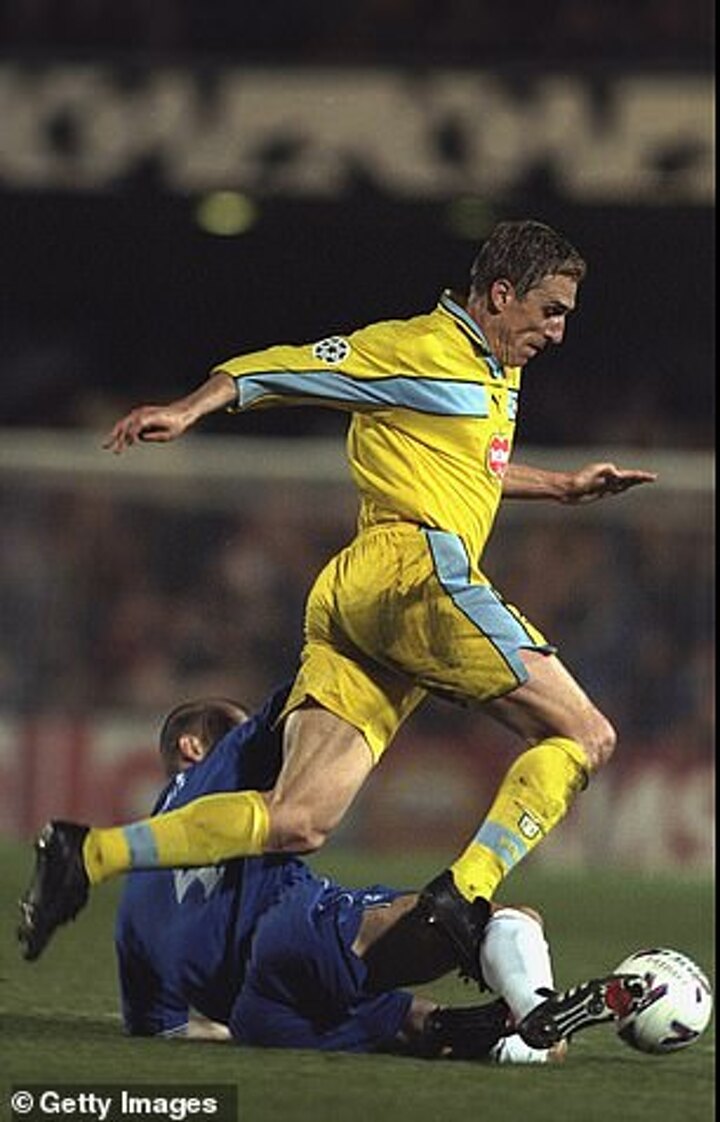 In their bright yellow away kit Eriksson's side lit up west London with a display worthy of their brilliance - but it was not without a scare.

On the stroke of half-time Gus Poyet put his laces through the ball from distance to produce a stunning opening goal.

Words were exchanged at half-time. Lazio were level on points with Feyenoord, who were drawing away to Marseille, and this was not how a side with so much potential was meant to cap off their European voyage.

First Inzaghi bundled in from close range after brilliant mazy running from Nedved but then came the pièce de résistance from Mihajlovic. A free-kick, wide on the right, directed like an arrow into the far top corner. Stamford Bridge was stunned, Lazio won and topped the group.

'I told them to play the game of their lives and that's what happened,' Eriksson said in victory. He wasn't wrong.

It was Chelsea's first home defeat in Europe in 33 matches dating all the way back to 1958. Eriksson's side had upset all the odds. 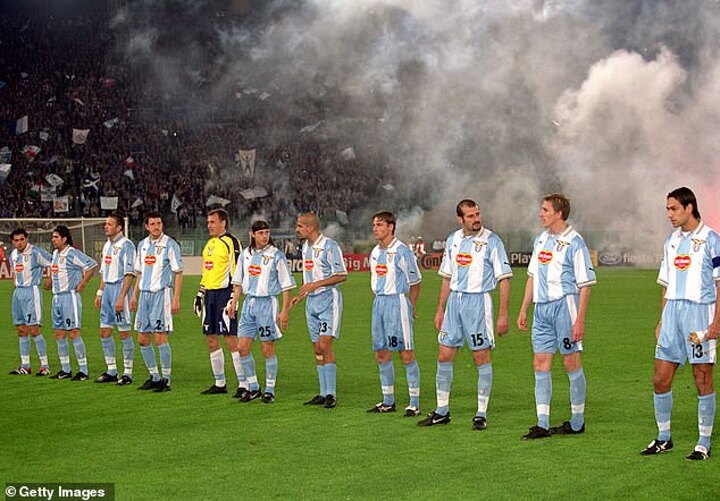 But that night in Valencia continues to haunt Eriksson and everyone associated with Lazio. It was a collapse of epic proportions. An improved display in the return leg was too little, too late, as Valencia eventually went on to the final, where they were beaten by Real Madrid.

Few knew that night in April 2000 that it would be February 2021 before Lazio would again hear the Champions League anthem for a knockout tie.

The years in between have been barren, a patient rebuilding job as the Milan sides and Juventus took centre stage for titles.

Ridley Scott's Roman epic 'Gladiator' was awarded 'Best Picture' at the 73rd Academy Awards soon after their Champions League exit in 2000. Now, under one of Eriksson's proteges in Inzaghi, another epic is being directed in Rome.

'It's a beautiful feeling (to be back in the knockout stages),' Inzaghi said this week.

'The crowning achievement of five years of work with this wonderful squad. 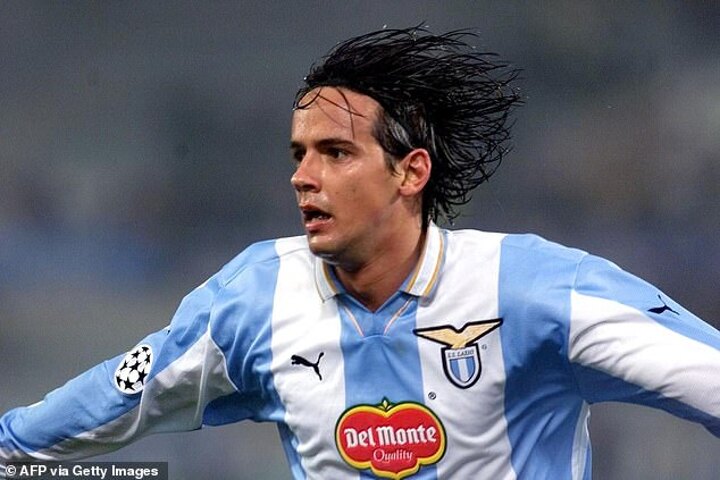 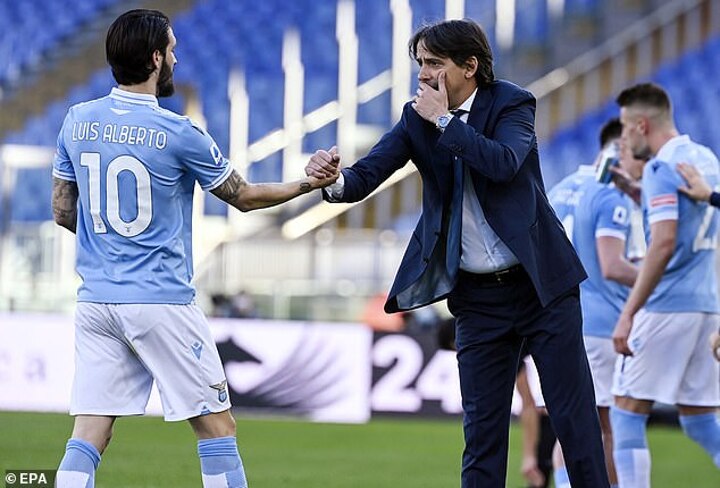 'We know how far we've come, how long and difficult it has been, we'll play the match in the best possible way, with the right light-heartedness and humility that distinguishes us.'

They return as underdogs, no side left considered more unlikely to progress than this Lazio outfit led on the pitch by striker Ciro Immobile.

Bayern have been a tour de force in Europe, a side brimming with world-class talents just as Eriksson was at Lazio 21 years ago.

Things are different now, the talent and expectation has been tempered but make no mistake that the spirit of that '99 side will be channeled by Inzaghi to pull off one of Europe's great upsets.