Atletico Madrid will travel across the city to face their most bitter rivals, Real Madrid, in what promises to be an engrossing tie this Thursday, but the traditional animosity between the two is likely to exist far more in the stands than on the pitch. 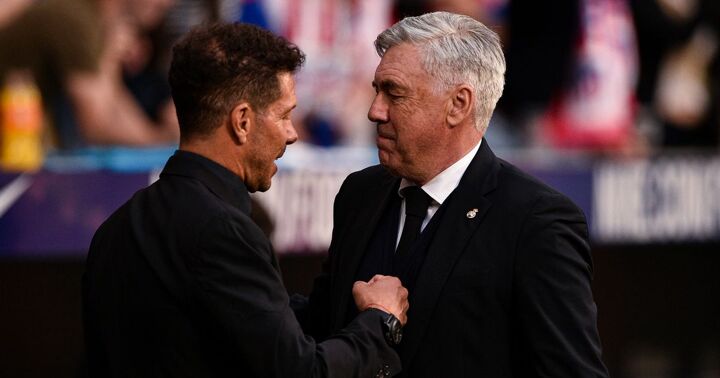 That is because the two coaches at least, seem to get on quite well. Atletico Madrid manager Diego Simeone can be painted as a villain often (sometimes his outfits suggest he is seeking exactly that), but he had nothing but kind words for his opposite number Carlo Ancelotti ahead of the Madrid derby.

He explained to Sport that while describing their relationship as extraordinary might be a stretch, it was good.

“The headlines of ‘extraordinary’ seem excessive to me,” shrugged Simeone.

“The only thing I can say about the relationship with Carlo, is that it is a relationship between coaches, because I haven’t had the chance to get together with him, although I would like to learn. It’s a good relationship, he seems like a very good person to me.”

Simeone was also positive about his side going into the match, who come off the back of one of their best performances of the season in their 3-0 win over Real Valladolid.

“I have been saying that the team looks better since we returned from the World Cup, with many more opportunities to create danger, and working very well as a group. [They are] Committed, enthusiastic, ready to play an important game, a tie with a very strong opponent, in a very good game, a coach that I greatly admire.”

Atleti often struggle against Real Madrid at the Santiago Bernabeu, but the added spice of a Copa del Rey tie might inspire them a little more. Los Colchoneros are fighting for their last conceivable shot at a trophy on Thursday, which will only increase their motivation for a game that does not require extra energy.