If you turned on Chilean TV this week or picked up a newspaper in Santiago, all the talk would have been about one man after La Roja’s crucial 2-0 World Cup qualifying win against Paraguay. 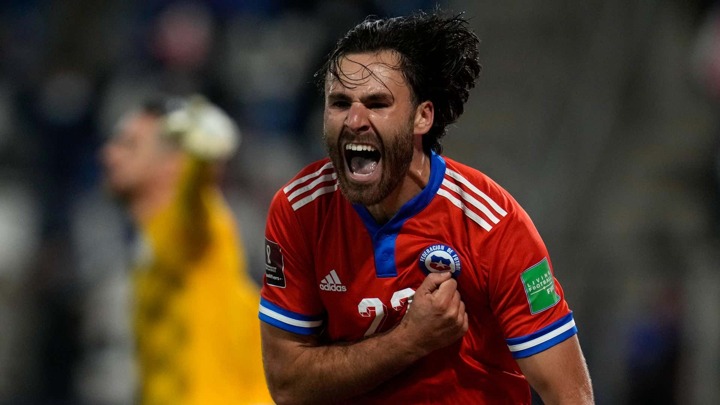 It wasn’t Alexis Sanchez, Arturo Vidal – or even Claudio Bravo, after his latest international clean sheet.

The hero of the hour was in fact Ben Brereton, a 22-year-old who was born in Stoke and plays his football in the Championship for Blackburn Rovers.

The powerful attacker, who qualifies to represent La Roja through his mother, has taken Chile by storm after netting his second international goal in just seven appearances on Monday night.

“It was a special moment,” he said after the game. “If my mum and dad were there, then I'm sure they would have been smiling. It was a good moment and brilliant considering it was the first time I've represented Chile in front of a full stadium.”

So, how has a Stoke-born forward, who represented England throughout the youth ranks and doesn’t speak a word of Spanish, ended up playing alongside the remnants of Chile’s golden generation?

Brereton was born in Stoke-on-Trent in 1999 and started his youth career with Manchester United before eventually moving to Nottingham Forest, where he was handed his professional debut in January 2017.

He stayed at the City Ground for a year before joining Blackburn on loan – a move that would be made permanent in 2019 for a price of around £7 million ($9.5m).

During that time, he had been contacted by the Football Federation of Chile, who had been made aware that Brereton’s mother was Chilean thanks to an online campaign launched by a fan who had spotted the forward’s eligibility while playing Football Manager.

Initial conversations were had about him potentially representing the 2015 Copa America winners, but it wasn’t until Francis Cagigao, Arsenal’s former head of international recruitment, was appointed as the National Director of Football at the Chilean FA in January, that things really started to progress.

“When I joined, we began to analyse every player, both those playing abroad and in the national league in Chile,” said Cagigao. “I started looking at every game Ben was playing, compiling reports and analysis. That led to a conversation with the player, with the agent, so we could make sure that the player did want to play for us.

“Once we did all that, it was just the case of having a chat with the new first-team coach, talking about Ben. Once we were sure we were going to call him up, then it was just a case of getting him over.”

Passport checks had to be carried out, with the Football Federation of Chile using Ben Corbyn, the son of former Labour leader Jeremy, to ensure things went through smoothly.

Corbyn, whose mother is also Chilean, has friends within Chile’s national team set-up and had previously offered to help with any efforts to register British-based players.

So, he did a lot of the groundwork before travelling with Brereton to the Chilean embassy in London to get his passport issued.

Once everything was in order, the Blackburn forward received his first call-up in May and travelled to Santiago ahead of the summer’s Copa America tournament.

“It’s a real honour,” Brereton said at the time. “Chile are a great team to be a part of and my mum and my granddad, and all the family, are very proud. It’s really special for them. They were all in tears when they found out. It’s really exciting and they’re really proud of me and I can’t wait to play.”

Brereton, who goes by the name Brereton Diaz when he plays for La Roja, made his debut as a substitute against Argentina in Chile’s opening Copa America group game and performed well enough to earn himself a start against Bolivia in the next match.

It was an opportunity he seized, scoring what would prove to be the match winner inside 10 minutes. The forward – who sang 'Wonderwall' alongside Cagigao as his initiation song in front of the Chile squad – went on to appear in all five of La Roja’s matches during the Copa America, including the quarter-final against Brazil.

By then, he had established himself as a fan favourite and he even found himself as the face of Pepsi in Chile, such was the level of his popularity following the tournament.

And this week that popularity increased further when he scored the opening goal in Chile’s crucial 2-0 World Cup qualifying success against Paraguay.

Having lost 2-0 in Peru on Friday, Martin Lasarte's team needed a win to keep their faint hopes of qualifying for next year’s tournament in Qatar alive and had been struggling to break Paraguay down before Brereton opened the scoring 22 minutes from time.

It was a vital goal and one that further cemented the Blackburn forward’s hero status in his adopted homeland.

“Certainly, there is a lot of talk about Ben here and he has earned it,” said Cagigao. “It's not just his goals, it's his work rate, his hunger, his willingness to fight for the team. Everybody in Chile has really taken to him because he’s humble and he wants to fight for the cause.

“He’s become something of an idol, but he knows that in football things can change very quickly and will keep his feet on the floor.”

The win against Paraguay leaves Chile eighth in the current South American World Cup qualifying table. The top four qualify automatically while the team that finishes fifth – a position currently occupied by Colombia – will enter an inter-confederation play-off for a World Cup spot.

Chile host Venezuela in the early hours of Friday morning sitting five points adrift of Colombia, so it’s another game they must win and Brereton will once again go into it with a nation’s hopes resting on his shoulders.

The way things have gone for him so far on the international stage, you wouldn’t bet against him writing another compelling chapter in his unlikely football fairytale.

“If you look at Ben now, not only has he totally integrated himself as a Chilean player, but he’s got the full respect of fans, of press and most importantly of the coaching and technical staff and of his team-mates,” said Cagigao.

“These are players of huge stature like Vidal, Bravo, Sanchez and [Gary] Medel. So, it was a big thing for him to walk into that dressing room. But in the end, if you are a footballer, it comes down to whether you can prove yourself on the pitch and he has done that.

”He gives Chile options that Chile didn’t have and that’s what we were looking for when I got here.”