Inter Milan midfielder Hakan Calhanoglu could be on the receiving end of a fine from his club, as per Alfredo Pedulla. The decision could be made as a result of the Turkish midfielder's latest interview with Tivibu Spor. He has stirred controversy by criticising his the club's manager Simeone Inzaghi. 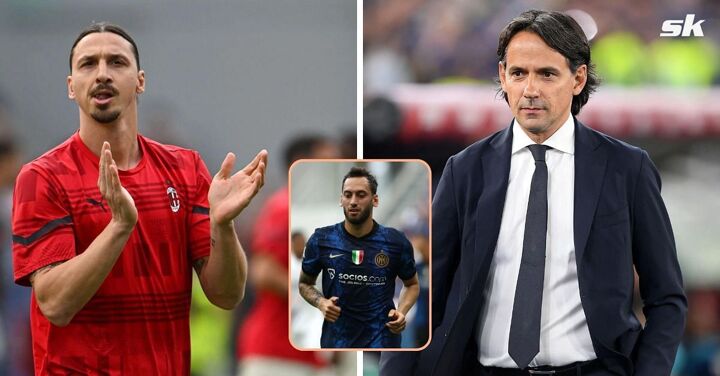 Additionally, the former AC Milan star also dropped some harsh words while talking about his former teammate Zlatan Ibrahimovic. The two shared the dressing room during the 2020-21 campaign. Calhanoglu signed for the Nerazzurri as a free agent last summer with the ambition of winning Serie A.

Unfortunately for him, it was his former club Milan that beat their arch rivals and Calhanoglu's new club to silverware this year. While the Rossoneri were celebrating their Serie A triumph, Ibrahimovic was seen mocking the Turkish player and inciting insulting chants from the crowd.

In response to the incident, Calhanoglu told Tivibu Spor, via Football Italia:

"He is a 40-year-old man, not 18, so I wouldn’t do that sort of thing at his age. He just likes being the centre of attention. He didn’t contribute to the Scudetto this season, he barely played, but will do everything to be the focus anyway."

“Besides, he is the one who always calls me up, asks me to go out to dinner or for a motorbike ride. He wrote about me in his book too. He had to write something, or it would’ve been blank pages. It’s best not to bother, honestly."

"We lost a derby that changed suddenly at the 75th minute after Ivan Perisic and I were substituted. We were leading 1-0 and then lost 2-1, so the coach contributed to the defeat and I told him as much."

As per the aforementioned report by Pedulla, the Italian giants were made aware of the interview by the Turkish midfielder himself. However, his words have been far from their liking and he could face a fine.

In the aftermath of the controversy, Calhanoglu defended himself and suggested that his comments had been misinterpreted by the media.

"Evidently, some of my words were misinterpreted by some sections of the media. I never criticised any coach, let alone Mister Inzaghi, who I consider to be a great coach and one who strongly wanted me at Inter, putting his faith in me. If my teammates and I had a great season and won two trophies, a lot of that is down to him."

The 28-year-old had a successful first year in the Nerazzurri colors as he contributed eight goals and 13 assists in 46 appearances. His aggression on the field was also evident as the player collected 11 yellow cards in that period.