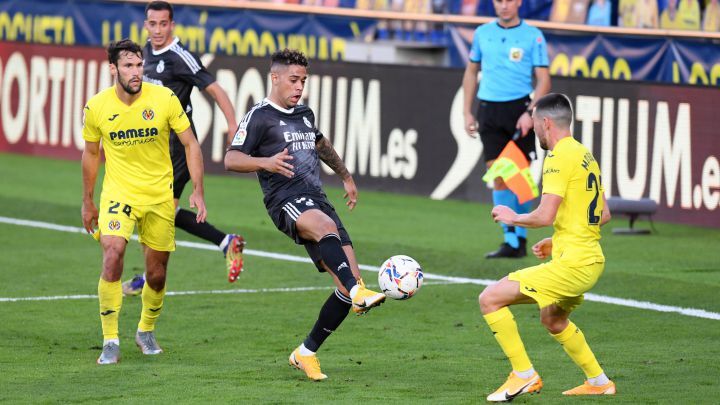 Courtois: Was responsible for error when he tried to play the ball out that almost cost Madrid a goal. Then he gave away the penalty that allowed Villarreal to equalise towards the end of the game. He can’t be Madrid’s saviour every game.

Carvajal: Best player for Madrid, who have missed him during his absence because of a knee injury. He offered a decisive surprise element in attack, which he showed with his assist for Mariano’s goal. And in defence, he was spectacular. Madrid will be happy to have him back at his best after so long.

Varane: Managed well in the absence of Ramos. The Frenchman saved what looked like a clear goal for Gerard Moreno.

Nacho: Good performance from Ramos’ stand-in. Solid at the back and also offered some intelligent contribution in attack.

Mendy: Better in the first half than in the second. He has definitely established himself as the starting left back. Saved a clear chance on 68’ after a Courtois error.

Kroos: Was at fault for an error that almost cost Madrid a goal. Without Casemiro, he had a different role than usual, playing in front of the central defenders.

Modric: Guarantees a spectacular performance. The dynamism and security he offers is essential for Madrid.

Lucas Vázquez: He has had a lot of prominence in the last few games and was rewarded with a starting place by Zidane. He made the team stronger and came close to scoring in the 72nd minute.

Odegaard: Missed a great opportunity to finally show his best at Madrid, as he got to play in his ideal number 10 role, ahead of Kroos and Modric. But it was a shy performance from the Norwegian. If he doesn’t take risks, he won't succeed.

Hazard: Poor performance. He is still a long way from the Hazard we saw the season prior to his arrival at Madrid. Although against Villarreal, he had an excuse because he has just come back from training in confinement after testing positive from coronavirus. But the reality is that he has yet to take off at Madrid.

Mariano: His attitude every time he is given the opportunity is admirable, as is his scoring ability. He scored within two minutes and ran 4.8 km in the first half, which is a lot for a forward. Picked up a knock soon after the second half started and after that his performance dropped.

Isco: Amid the recent surprising news of his request to leave in the winter, Zidane reached for him when the score was still 1-0 to Madrid to seek more of the ball but he went unnoticed.

Vinicius: He definitely has a problem with making the best choice. He makes one good decision for every three wrong ones.

Asensio: Zidane put him as a centre forward to replace Mariano at the end of the game. He improved the team, but the momentum had already subsided.